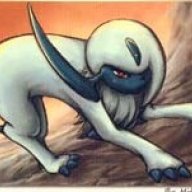 It's just Absol... · From In a Pokémon game cartridge.