slow progress here. started digital crystal copy on 3ds. beat elite 4 long ago and tried red on mt silver. lost a few times due to underleveled but i was expecting that. managed to squeeze out a win but snorlax is a beast when my team is 10lvl under his team and only 1 stronger one on my team suicune 5 levels under his lowest. got donphan to deal with pikachu. recently came across misdreavus, first ghost i decided to catch and it learns mean look, perish song and is immune to all of snorlax moves. got the team to 65 and 1 level 70 suicune but donphan 62 and misdreavus to 46. snorlax looks much easier to beat until RNG swaps him out
;330; ;083; ;282;
3ds fc: 3926 6866-2593 ign (XY) Nelliel, fighting: Sawk Machoke Tyrogue. polar pattern Vivillion, ign sun: Nelliel
2ds FC is 4485-2497-2628 with bermite, delibird, cloyster, Mizore (UM)

Lately I've been busy with my BDSP Water-type run, but sometimes my son likes to hog the Switch to play MineCraft. This is for those moments.

Just in case anybody was wondering, I do customize these short runs for enjoyment purposes. As such, I'm going to catch a Phanpy where you can normally catch it in Crystal (5% chance just north of the first route) - and Houndour where you can normally capture Growlithe/Vulpix right after Violet City near Sudowoodo. I don't think these changes affect the gameplay at all.

It's one of the most redundant things in the entire franchise to have lower-tiered Dark-types locked in postgame. However you try to think about it, a Dark-type like Houndour that evolves at level 24 should not be postgame. It's idiotic to be able to catch it only after you've beaten the Champion once already. Also, why give us the option for Growlithe or Vulpix and not give us a good way to get a Fire-stone before Kanto. -.-

And I don't know what Murkrow is doing in that route either. As it's not strong at all in GenII (and whenever I plan to use it, I mostly put it somewhere like Goldenrod since you can normally have a Noctowl by then. Also, with a bit of work you can have a level 2 Togetic, a level 23 Crobat and/or Xatu at level 25. I consider most of these to be better then Murkrow, so yeah, no clue.

/rantover.
Answer to all the bad things in the world: Give up on trying to make everything better. Hence, accepting it for what it is. YOLO! <- Click the link and daw.. -.-

I’ve recently started a brand new run in Crystal that I’m hoping will be my biggest ever.

I started with Cyndaquil and worked through the first stages of the game in relatively standard fashion, catching nothing until I got to Violet City. There, I managed to snatch a female Growlithe, which has since become my main battler. I powered through Sprout Tower, the Violet City Gym, Union Cave, Slowpoke Well, the Azalea Town Gym, and Ilex Forest with my team of two, grabbing a Psyduck along the way to serve as my HM mule.

Once I got to Route 34 is where my plan hatched. I’m currently soft-resetting for an Odd Egg as I’m hoping for a shiny Cleffa, Igglybuff, or Pichu - any of them will let me get a shiny that can pass DVs into the Field egg group, either directly or through a Snubbul. The idea is that from there, I can breed at a much higher chance of shinies from various egg groups to build up a full shiny team, and eventually a full shiny dex, much faster than normal, and both more reliably and sooner on a single cartridge than in almost any other game.

The real question would be whether I want to make things even easier on myself by using the shiny Ditto trick by breeding a shiny Smeargle. That’s basically an ethical/moral question so I’ll figure it out once I’m actually to the point where it matters - which, if I recall, won’t be until I beat Morty, as wild Smeargle are restricted to a Surf-protected section of the Ruins of Alph.

My intent is to eventually build a shiny team for my main play-through of Johto and Kanto, then move on to conquering all ten level modes of the Battle Tower with shiny teams, then complete my shiny dex. I don’t know if it’ll even be possible to get a shiny Mew and I feel like the Gen 1 legendaries would be extremely tedious to complete, but everything else - even the roamers, as long as that might take - is possible! Currently, I’m at 12 resets for the Odd Egg without any of the three Pokémon that let me trigger this run - if I make it to a hundred, I’ll probably give up and wait until I get Surf and use the guaranteed shiny of the Red Gyarados to kick-start things.
Last edited: Jan 10, 2022
⋆ ⋆ ⋆ ⋆ ⋆ ⋆​

Earlier this week I decided to finally do my second ever Yellow playthrough, first one happened back when the game first came out on the 3DS VC back in 2016. Since I didn't use Pikachu last time I decided to use it this time around in order to have the "authentic" Yellow experience. I have 3 Badges so far with a team of Pikachu, Nidoqueen and the newly caught Horsea. Skipped Erika for now until I get at least one more Pokemon on my team.

A quick update on my Yellow playthrough. I now have 6 Badges and a team of Pikachu, Nidoqueen, Seadra, Tauros and Exeggutor. Just did the little surfing Pikachu minigame and I'll be surfing to the Cinnabar Island soon.

Today I finally completed my Pokemon Yellow playthrough. I was underleveled but I had no issues with the Elite 4 or the Champion, all 5 battles were pretty easy and Lorelei was the only one that managed to faint more than one of my Pokemon (she defeated 3 somehow, usually she is the easiest to beat but not today I guess). 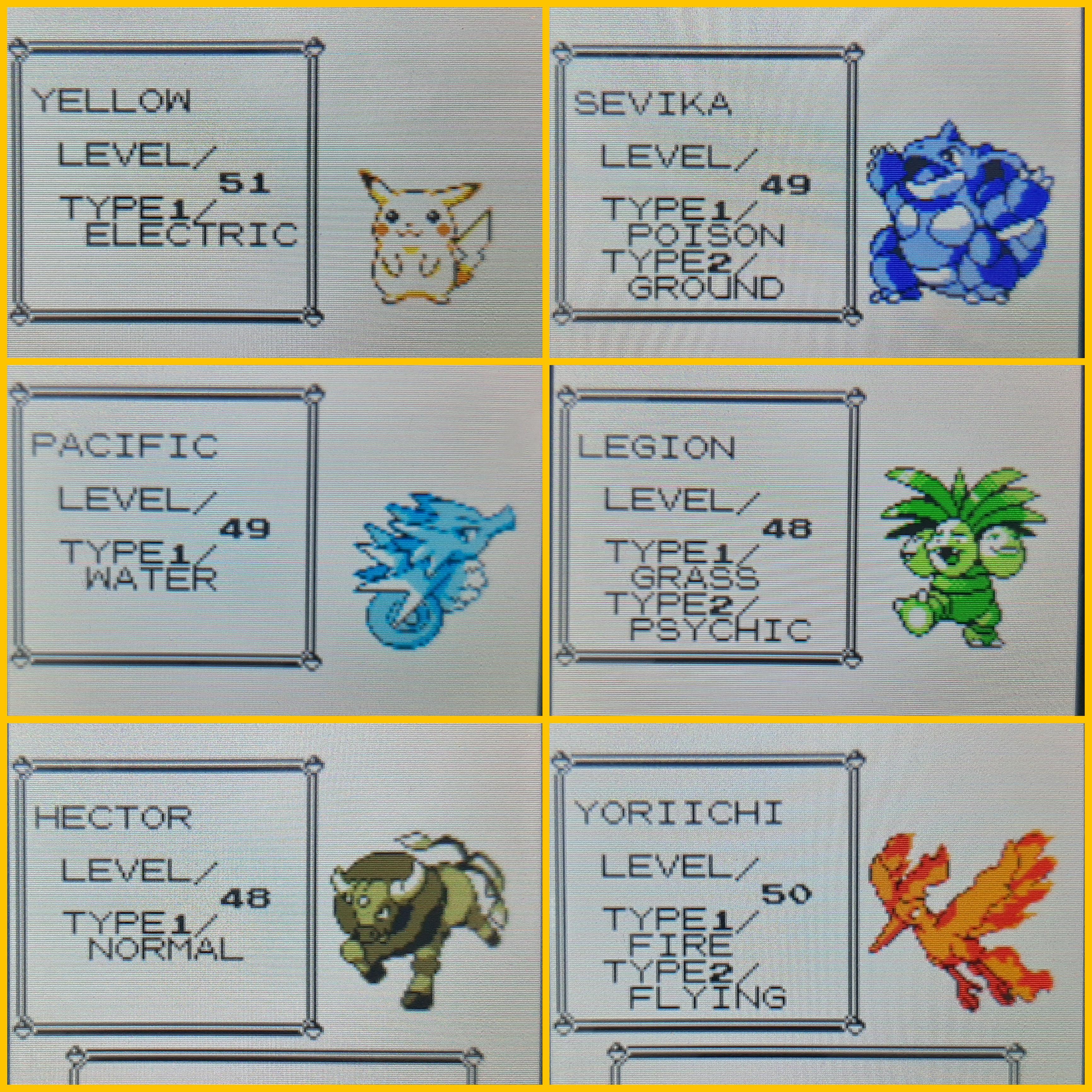 I started a Crystal run yesterday after work in memory of Iwata, who made it so Gen 2 could have two regions and 16 gyms. I decided I would do a run with only Pokemon that appear before the first gym. (I'm counting Togepi.) So my team will end up being:
Typhlosion - Megumin (from Konosuba)
Donphan - Vegeta Jr. (because elephants have Trunks)
Ursaring - Real Akuma (reference to Rillakuma and Akuma from Street Fighter)
Togetic - Oocca (from Skyward Sword)
Haunter - VincePrice (the king of spooky)
Poliwrath - Katara (the Waterbender)
Alice in Wonderland: "I do seven impossible things before breakfast." Me: notices she didn't say "before caffeine"