Okay so since my last post I have beaten 7/8 gyms and now I'm in what I presume to be the Sevii Islands beginning the hunt for a child? I don't really know at this point, I had to go to One Island to talk to Celio then to Two Island to get something from the Game Corner guy and now I'm at Three Island about to go find Lostelle? Talk about convoluted.

Anywho the second run through Kanto was not particularly exciting, albeit it is much better to look at than it was in Red (and dare I say Let's Go as well? I'm a sucker for the GBA games). I progressed through the game taking on my rival at Pokemon Tower before taking on Rocket Hideout, then back to Pokemon Tower and skipping Erika to speed down Cycling Road and head to Fuchsia City. Why? The Safari Zone! Not only is it home to two HMs I need, but my fifth team member awaits me here! That member being Exeggcute. I taught it Psychic, took on the Cycling Road, swept Erika with Exeggcute + Charmeleon and then proceeded to defeat every trainer available before Koga to get my levels up. This got my squad to level 36, where Charmeleon evolved into Charizard!

Koga was swept by Exeggcute + Charizard since Psychic is brutally strong, even if Exeggcute is not. Weezing and Muk are annoying tanky as well to make things worse. It got my lil pile of eggs to level 37 and the move Sleep Powder though, which meant I could FINALLY evolve it into an Exeggutor! Now I could Surf I swam down to the Seafoam Islands to nab myself a Seel as my final team member, and taught them Ice Beam from the Game Corner alongside Surf. I grinded it up a bit before taking on Silph Co., but found it easier to keep the Exp. Share on it and use my stronger team members to get through this content slump, especially since my rival was a surprising challenge here. By the time I was fighting Giovanni I had a Dewgong, although Exeggutor and Clefable hogged the victories here. Sabrina got swept by Clefable until Alakazam crit it, so I beat it with Dewgong to get a lil bit of extra experience on it. I beat the routes around Cinnabar, cleared out the Pokemon Mansion and let Dewgong loose on Blaine for an easy win. Simple stuff!

This team is not as good as my Red team, but I like them all the same. They're quite vivid I feel, in terms of looking at them. Keeps me entertained. MVP has to be Clefable so far since it beats anything I find myself struggling against and is quite bulky, plus it levels up so so easily! I was initially going to teach it Calm Mind but I might go with Shadow Ball instead for extra Ghost coverage for Agatha. Raichu and Sandslash have surprised me with how good they are - both hit pretty damn hard and whilst Raichu smacks things a lot harder, Sandslash can actually take a hit? Plus Dig utility is sweet. Charizard feels pretty solid too, just like Venusaur did in Red actually - nothing outstanding, but solidly reliable. Exeggutor is fine, it hits really hard and was invaluable against a lot of threats my team struggles with, but it's no Alakazam and that Poison weakness is really unfortunate. It is my second favourite Psychic from the region so it was either that or Slowbro/Mr. Mime, who I wasn't quite ready to use yet. Finally, Dewgong feels okay? It's not very strong but it is tanky, and I look forward to pitting it versus Lance. Thick Fat was also very handy for Blaine I found.

So since my last post two weeks ago I found Lostelle, beat Giovanni, rushed through Victory Road and beat the Pokemon League! Didn't take too long really, all things considered. Kinda sped through the Sevii Islands stuff because it doesn't really interest me at the moment and I really did want to just complete the game and be (mostly) done with it, Giovanni got wrecked by Exeggutor and Sandslash and my rival just before Victory Road was a joke with his unevolved stuff. I got my squad to level 47 with Rare Candies and took on the Elite 4.
Blue was a bit tougher, but nothing major. Pidgeot was 2HKOed by Raichu's Thunderbolt although he did switch to Rhydon for some funky AI tactics. I swapped to Charizard to avoid Earthquake, went into Sandslash to tank Rock Tomb and thanks to Leftovers lived Earthquake + Take Down to 2HKO with Earthquake. Exeggutor slowly whittled Blastoise down with the usual sleep + Leech Seed tactics, Dewgong wore Arcanine down with Surf (which 4HKOed, by the way, it's bad). Charizard 2HKOed Exeggutor with Flamethrower, Clefable 2HKOed Alakazam with Shadow Ball after tanking a Psychic and it randomly going for Future Sight? And I won!

I still need to complete the post-game Sevii Islands stuff for the roaming Johto beast, and I also need to capture the legendary birds & Mewtwo to transfer to Platinum but I won't post those here. My next game is Platinum! But I won't be playing it until 2021 because I have so many assignments to do, it's unreal.

Final team thoughts: Charizard is pretty good but not outstanding (bit like Venusaur in Red) and I really don't like how weak Fly felt to use in this game (70BP sucks). Raichu might actually claim MVP status in the end, Electric is such a good typing it seems versus the Elite 4 and Champion especially without the Ice weakness like Zapdos had! Clefable could also be MVP, although I feel like it wasn't quite as bulky as I wanted and despite an amazing movepool it didn't really hit hard enough to use it? I'm undecided. Sandslash was fine I guess, Earthquake really helped it towards the end since Dig was pretty weak but Ground typing is pretty exploitable towards the end-game, and everything feels like a physical wall. Plus it wasn't that bulky all things considered. Exeggutor was good, did much better against the Elite 4 than expected but Grass types aren't that helpful and I think a good Psychic type needs to be fast to work well? It was no Alakazam and I kinda wished I had used Mr. Mime or even Hypno. Also SunnyBeam would've been better than Leech Seed + Giga Drain, PP issues suck! Dewgong wasn't great, Ice STAB was solid but Lapras would've been better for that and it just did not hit very hard nor could it use its bulk efficiently.

So...I have a problem and need some help. I've been playing Pokemon Emerald lately. I beat the Elite Four, got the National Dex, completed the Hoenn Dex, and got the completion certificate from the game designer NPC. I hear this is how you get one of the Johto starters in Emerald. I did all of this...and for some reason the event won't activate. No matter what I do, I can't seem to activate the event where Birch lets you have one of the Johto starters in my Emerald game. Is there something else I need to do, or is there some kind of defect with my game?
Pokemon Shield Name: Ramona
Switch code: SW-5239-6636-1207

I've been playing Emerald for the first time. I beat Watson today.

My team is currently Shrunk the Marshtomp, Kapp'n the Lombre, Raddle the Swalot, Snake the Nincada, Caroline the Aron, and Static the Electrike. I also have a Zigzagoon named Nook who I use for HMs. I do plan on catching a Trapinch and naming it Nat and getting Shedinja and naming it Wisp just because I love Flygon and Shedinja, but I don't really plan my teams.

Oh, also my Pokémon are all named after Animal Crossing characters. Some are pretty much the same animals like Shrunk and Mudkip being axolotls or Kapp'n and Lombre being kappas. But the rest are harder. Swalot is Raddle because Raddle loves eating and is a poison dart frog, Nincada is Snake because Snake is a ninja, Electrike is Static because I couldn't think of anything better, and Aron is Caroline because there was nothing better than just having Aron hidden in her name. 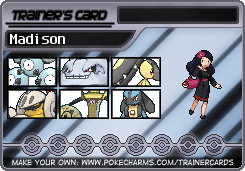 It's fun to steel​