Ash & co. have started to take great interest in Samson Oak's Komala. Learning that it's always asleep and that it can even eat and battle while asleep, the gang are curious over how it and Samson Oak met. However, before too long, Jigglypuff soon arrives in the school and battles with Komala. Will Komala be able to defeat Jigglypuff?

Damn, Komala is a savage in battles!

It was kinda satisfying seeing Jigglypuff being the one which ended up having a drawn face for once. But I wish it could be a bit upset for that.
Last edited: Dec 28, 2017

One of most funniest, but still enjoyable fillers I have ever seen. So basically anyone who sings in Jigglypuff's tone put others to sleep? Jigglypuff finally got a taste of its own medicine. Komala is the MVP of today's episode!

5.5/10 for this episode. It was a pretty boring, run of the mill filler with a few occasional bright spots.

Again, Ash was made to look like a fool by screaming at Komala to wake it up. And I almost got Vietnam flashbacks when I saw Principal Oak, since I remembered that horrifying part of last week's episode where he turned into Vulpix.

So based on the flashback, Oak has always been an idiot, by being a doofus even in front of those random people. I did find it pretty nice how Komala actually found its home tbh. And way to go Komala, knocking out Kiawe's Marowak, which definitely can get annoying at times due to its bullying nature.

Nice to see Giovanni again in the Rocket fantasies, though I guess it confirms that TRio are going to foolishly try and catch UB's. I guess that's why we saw Bewear vs Buzzwole. Seriously, Bewear fell asleep to Jigglypuff's sing? You've disappointed me greatly Bewear.

Komala vs Rowlet sleeping contest. Finally, we witness a battle that ranks along with Metapod vs Metapod as the greatest. So it turns that after 20 years, we learn that it's not specifically Jigglypuff's song that makes people sleep, but rather any song at that pitch and tone does the trick. It was nice seeing Jigglypuff getting a taste of its own medicine at last. That was definitely the best part of this episode.
Last edited: Dec 28, 2017

Staff member
Moderator
So way back when, we were introduced to to Jigglypuff seen from above.

Today, we see Jigglypuff as seen from below.

A nice callback. Especially as since the original joke was wrong since the 3D games reveal that Jigglypuff isn't completely circular when seen from above due to its ears.

Popplio can indeed learn Sing so it was nice seeing it be the best at singing like Jigglypuff.

WaterShuriken said:
Popplio can indeed learn Sing so it was nice seeing it be the best at singing like Jigglypuff.
Click to expand...

That's what I was thinking. I was wondering if Purrin just fell asleep because of singing too much or I thought they might reveal Poplio learned sing also and was able to put Purrin asleep too. But I'm thinking it was being overworked, couldnt understand though.

Loved this episode though, one of my favorites in terms of filler.

Episode was boring to me tbh. At least Ash was training Litten and Lycanroc in the beginning. Small win for me.

Honestly, the episode was a bit of a let down for me, not because it was “filler,” but because it didn’t feel like there was really a plot. Aside from some character development for Komala, I didn’t walk out of this episode feeling like there was an overall point to it. The only time I really laughed was seeing that Komala scribbled on Jigglypuff’s face since it’s nice to see the pink diva finally getting a taste of its own medicine (though that was undercut since Jigglypuff just laughed it off) & seeing Bewear’s face

The only things I really got out of it were Komala’s backstory, a glimpse of what Ash’s life is like now with Prof. Burnet, & the fact that Popplio might have learned Sing
Sword/Go/IoA/CRY/CT/Y League Card: 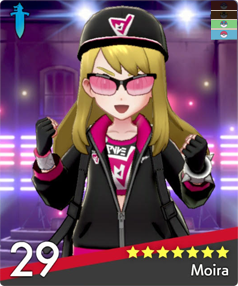 This episode was pretty funny! I loved Rotom's footage he caught when they were asleep. Jigglypuff and Komala's interactions were hilarious! It's so funny seeing Jigglypuff get caught in the wind and blown away. It was also nice learning how Principal Oak and omala met. I still enjoy knowing that the characters in universe shudder in sight of Principal Oak's puns & faces.

Nice resolution to Jigglypuff after all these years. I hope I don't see it again. Nice faces you drew. Especially Bewear at the end.
The M

I'm hoping they're setting it up for Lillie to capture Jigglypuff since it's Fairy Type.

Anyway Jigglypuff getting it's face drawn on was the hightlight of this episode.
Last edited: Dec 28, 2017

"It's weird people refuse to watch BW yet hate Iris for the sole purpose that she calls Ash a kid. Her catchphrase is supposed to be ironic, she's a kid herself.”
Click to expand...

The episode was cute. Loved getting to see Ash train with Litten a bit. Komala, as predicted, was hilarious and adorable. Jigglypuff finding Komala drawing on its face amusing was a highlight. Team Rocket are apparently hunting Ultra Beasts now, but I wonder if that's ever going to go anywhere after they still haven't done anything with their Z-Crystal. Oh well.
A

I'm really loving sun and moon's fillers more than fillers from prior series.

I was simply pleased that we got a glimpse of Satoshi engaging in training his Nyabby again, although I wasn't too fond of the Purin subplot. I'm glad that she wasn't captured, and also that her face got painted on, yet nothing fascinating occurred.

Well, aside from learning a bit more about what moves certain Pokémon know and getting a bit of background on a side-character, this episode really didn't contribute much to the story... That said, I still had fun with it. The rivalry between Purin and Nekkoala was actually quite fun, and it's nice to see them actually do something slightly different with Purin aside from just "It sings, everyone falls asleep, it gets angry and draws on their faces, the end".
You can like a thing and argue for its merits without being hostile to those who disagree. If you can't argue in favor of the thing you like without overtly attacking the alternative and/or anyone who likes said alternative, you are never going to win over anyone.

-A thing I wish more people in this community would understand.

I found the episode a little lacking and really they shouldn't have brought Jigglypuff to Alola.

With Jigglypuff being super happy after seeing its face drawn, I wonder, if this is the final conclusion to the Jigglypuff gag. It felt like it finally got satisfaction, and I don't see it trying to bother anyone after this.

So..... did anyone else notice the reference in the "who's that pokemon" part? I lold' at that part. Apart from that. This was a SoL episode so not much to expect from it. There were a few stand out moments though. The TR scene at the end with Bewear had me loling is the most obvious one. This episode was pretty good for what it was.