Sceptile Leaf Blade said:
I've joked about Jiren being a dumb idiot before, but this is really getting ridiculous. Why is he having such a hard time throwing out some guys without energy? Even with only like 2 minutes left he's still just standing there doing nothing but waiting for his opponents to attack. Jiren is like the worst main antagonist ever in the series. I just can't take him seriously as a threat when he continues to be this dumb.
Click to expand...

127 was probably the nail in the coffin for Jiren as a character, which is unfortunate because this episode did a much better job of handling the thematic implications of his character. He's a lone wolf who cares about nothing but his own strength, making him a fitting final boss for an arc about teamwork. Sure it may be down to just him and Goku, but the whole idea is that Goku and Vegeta get strength from fighting for others, and wouldn't have gotten as far as they did without teamwork, while Jiren has basically rejected all his so-called friends.

It's decent, workable stuff let down by poor execution, but I'd call it a victim of the way Super is made. No direction, no coherence, nobody to give Toriyama a slap for suggesting the damn tournament have an in-universe time equivalent to two average anime episodes.
Pokemon HOME friend code: SW-6934-3386-6787. We're all mates, right?

I get that, but that is also incredibly contradictory to him actually being in the Pride Troopers. Why is he even a part of a team if he doesn't believe in team work? Jiren would have worked better in U9 or U10 as a loner final boss kind of guy, but in U11 as part of the Pride Trooper team he just doesn't work.

Which is exactly what 17 called out during his fight with Jiren. He accused Jiren of using the Pride Troopers and Belmod for his own purposes without paying it forward in respect and camaraderie, and that managed to get a rise out of Jiren, showing that a nerve had indeed been touched.

I think Jiren will be proberly be more popular once we have had some time to reflect on the arc. As it stands now I feel like a lot of people are too caught up in "we waited 50 episodes for a Bat-man origin" to see just how good of a foil Jiren really is for Goku.

People really thought Kale would make the cut over Broly lmao, get rekt'd.

I don't get what's so special about Broly, he isn't even a canon character. I'll take Kale over Broly any day. I don't care for Bardock making it in either; there's much more interesting characters to choose from instead of him imo.
Last edited: Feb 18, 2018

It's not that that there's anything special or interesting about Broly, it's his iconic status that gets him in all these games. Even when it doesn't make sense.

Oh, I knew it was a longshot to think Kale would replace Broly in one of these games, at least for now. But still, I can't muster the excitement for him, or Bardock for that matter (Super Saiyan? For god's sake), while Kale would have had me interested. The best part of FighterZ apart from the awesome gameplay is the way they do character interactions. Kale could have had unique interactions with the likes of Caulifla (let's face it, they'd be a pair), Goku, Hit, Freeza, possibly Gohan or Vegeta, among others.

Whereas Broly's character interactions are basically a flowchart.

Oh, totally. Ultra Necrozma is a DBZ power up, and Light That Burns the Sky is the Spirit Bomb, complete with trainer having a "let me lend you my energy!" moment. XD

Anyway, the previews for the next episode sure looked bright and flashy, but this episode was really low key. Mostly just Jiren punching things over and over and over again. And yes, Vegeta sounded like a broken record here, but his actual dropping it was a lot... different than I expected. No super-big, heroic last stand. Just getting pulverized by Jiren and giving whatever energy he's got left to Goku to set up the final showdown. I really do still think there's a chance Frieza's going to win by technicality and everyone's gonna rage. I think I'd love to see that happen just for the reactions alone. Also, loved Belmod's super-meta line about Goku at the end there. Pretty much sums up the whole series.

What even is Gohan Blanco?

I don't follow the memes.
I should probably write sometime here.
Hello.​

FlorgesPower2 said:
What even is Gohan Blanco?

Neither do I, but I think it has something to do with people wanting Gohan to be the big hero and have a new transformation. White(the blanco part) is just one of the few Saiyan colors not taken...or it would be were it not for the fact that Merged Zamasu is part-Saiyan
Favorite Generation: V
Favorite Pokemon per generation: Mewtwo, Jirachi, Giratina, Ferrothorn, Klefki, Mimikyu, Falinks, Tinkaton
Favorite type: Water
Favorite team: Plasma
Most recent shiny: Banette (Scarlet random)
Recent GO legendary: Reshiram
Switch Friend Code: SW-1509-3691-0315
GO: Redjirachi93, 3853 8382 6220

[Spoil]If No. 17 is truly alive after all this will be some Fairy Tail level sh*t right here. I wonder if episode 131 will have any connection with EOZ though.[/Spoil]

I don't see how episode 131 would have time to connect to EOZ. They have to revive the other universes and decide what to do with Frieza

Red and Blue said:
I don't see how episode 131 would have time to connect to EOZ. They have to revive the other universes and decide what to do with Frieza
Click to expand...

[Spoil]By connection, I was thinking more the part with Bulma not seeing Goku for five years or something like that.[/Spoil]

FlorgesPower2 said:
What even is Gohan Blanco?

RedJirachi said:
Neither do I, but I think it has something to do with people wanting Gohan to be the big hero and have a new transformation. White(the blanco part) is just one of the few Saiyan colors not taken...or it would be were it not for the fact that Merged Zamasu is part-Saiyan
Click to expand...

Here it is, if you haven't seen it as of yet: 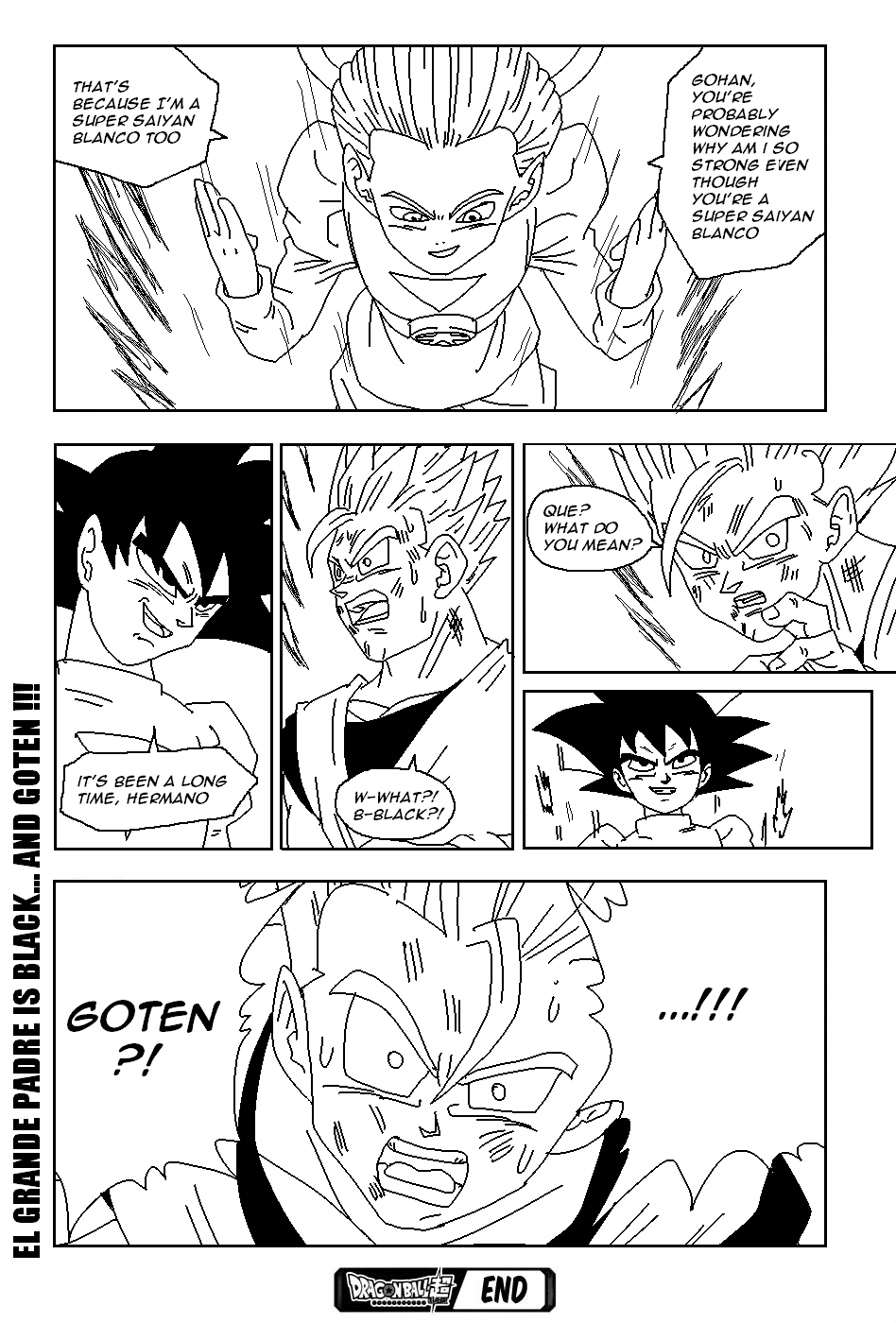 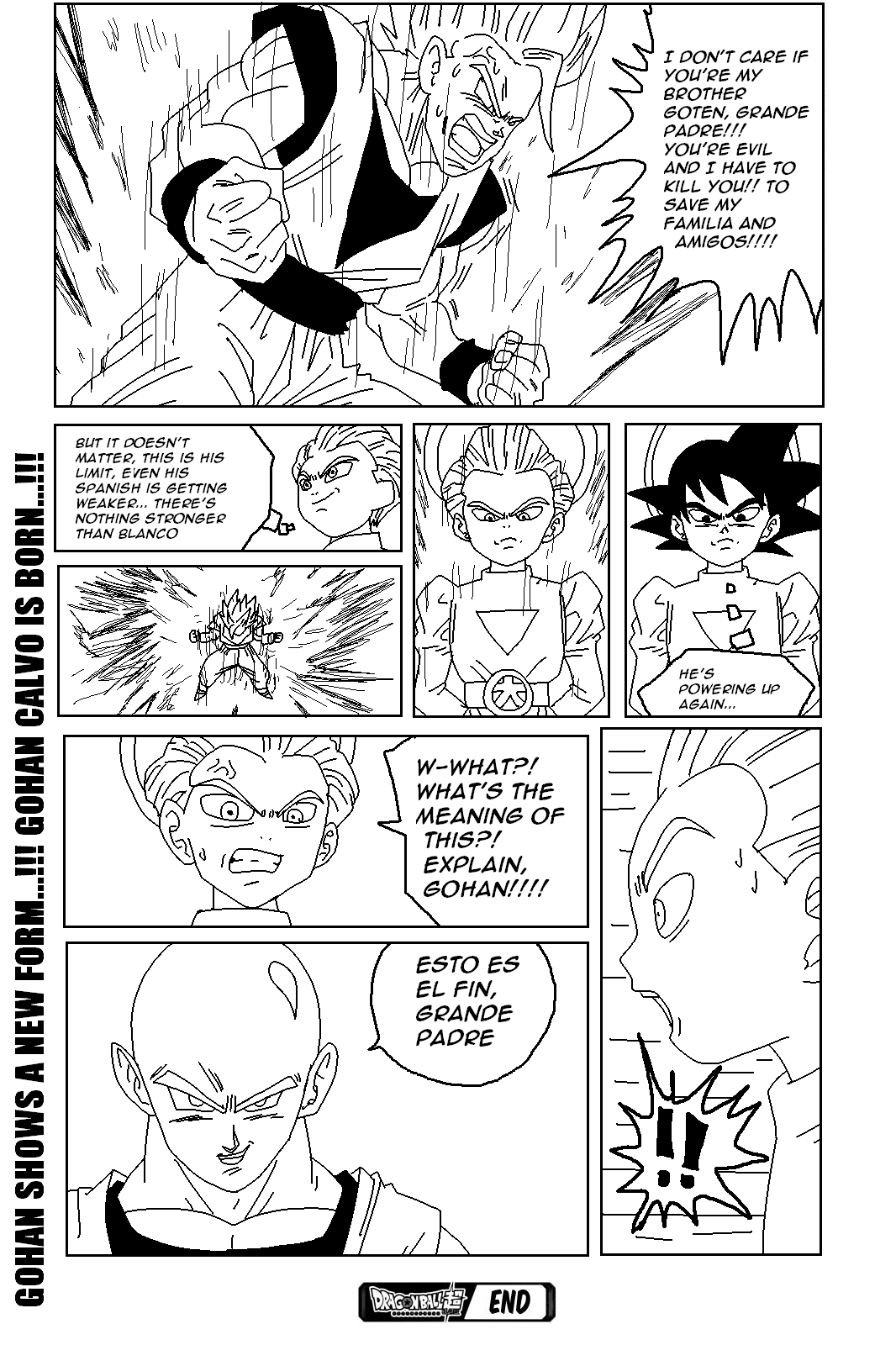 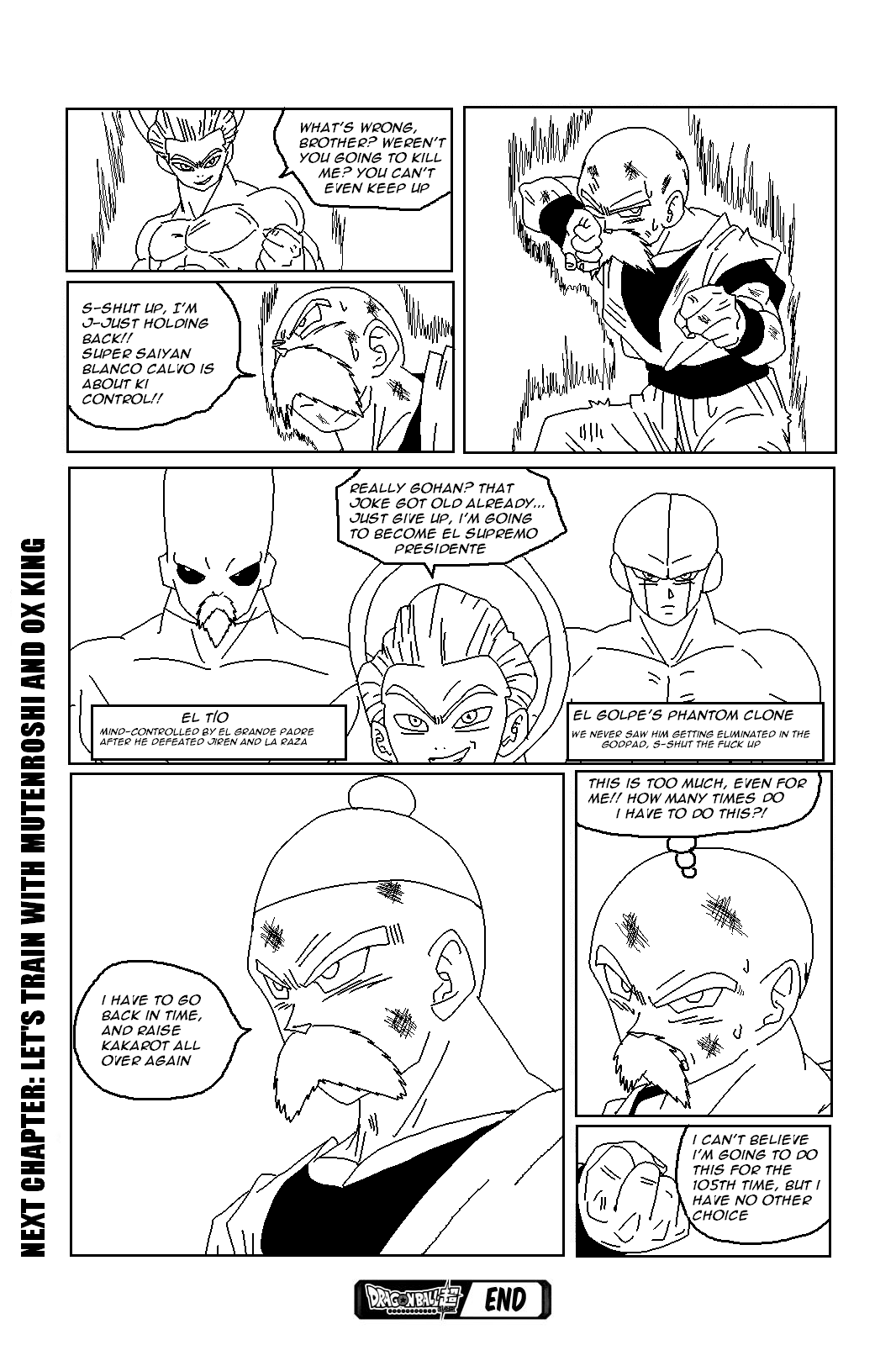 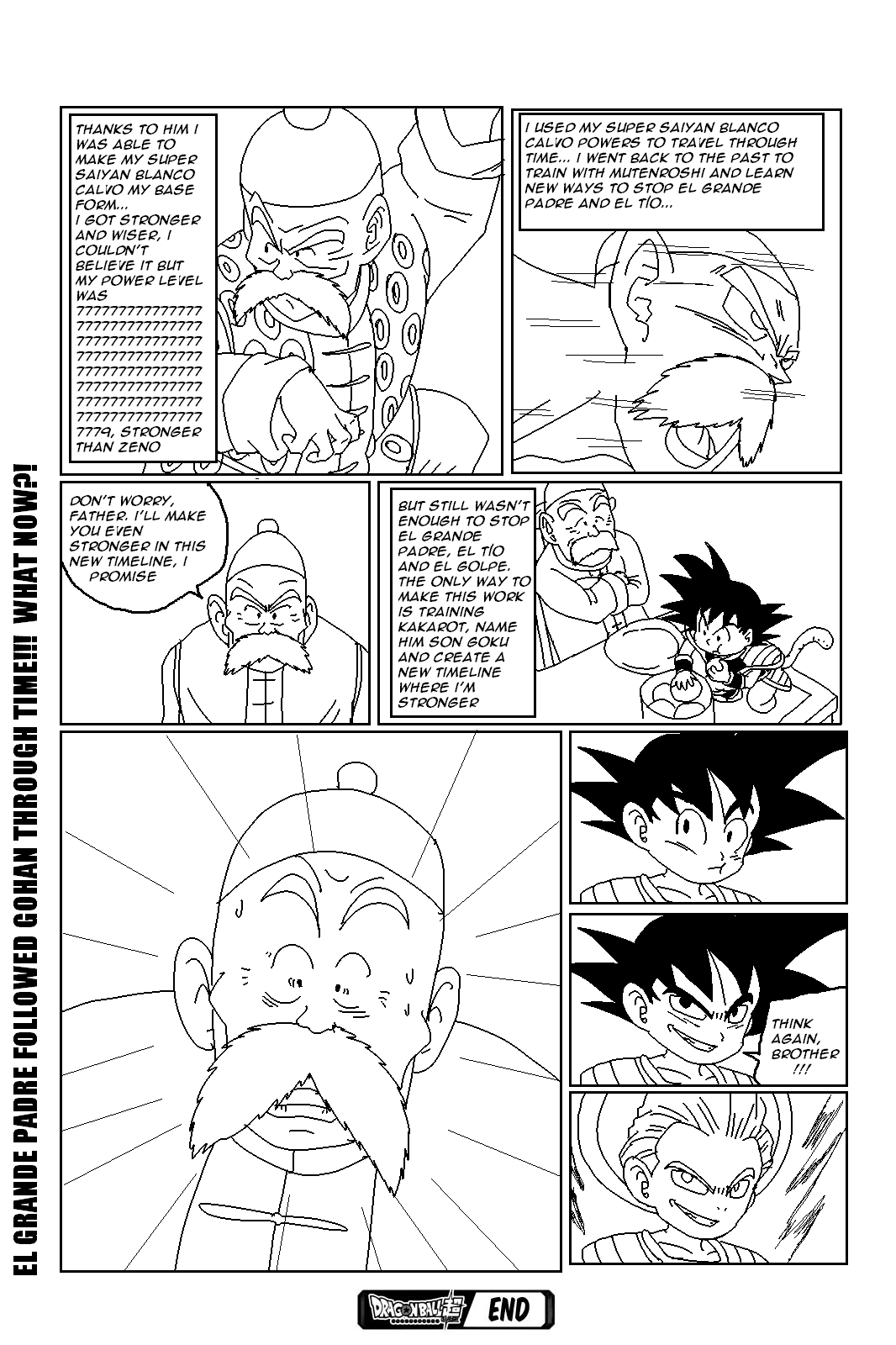 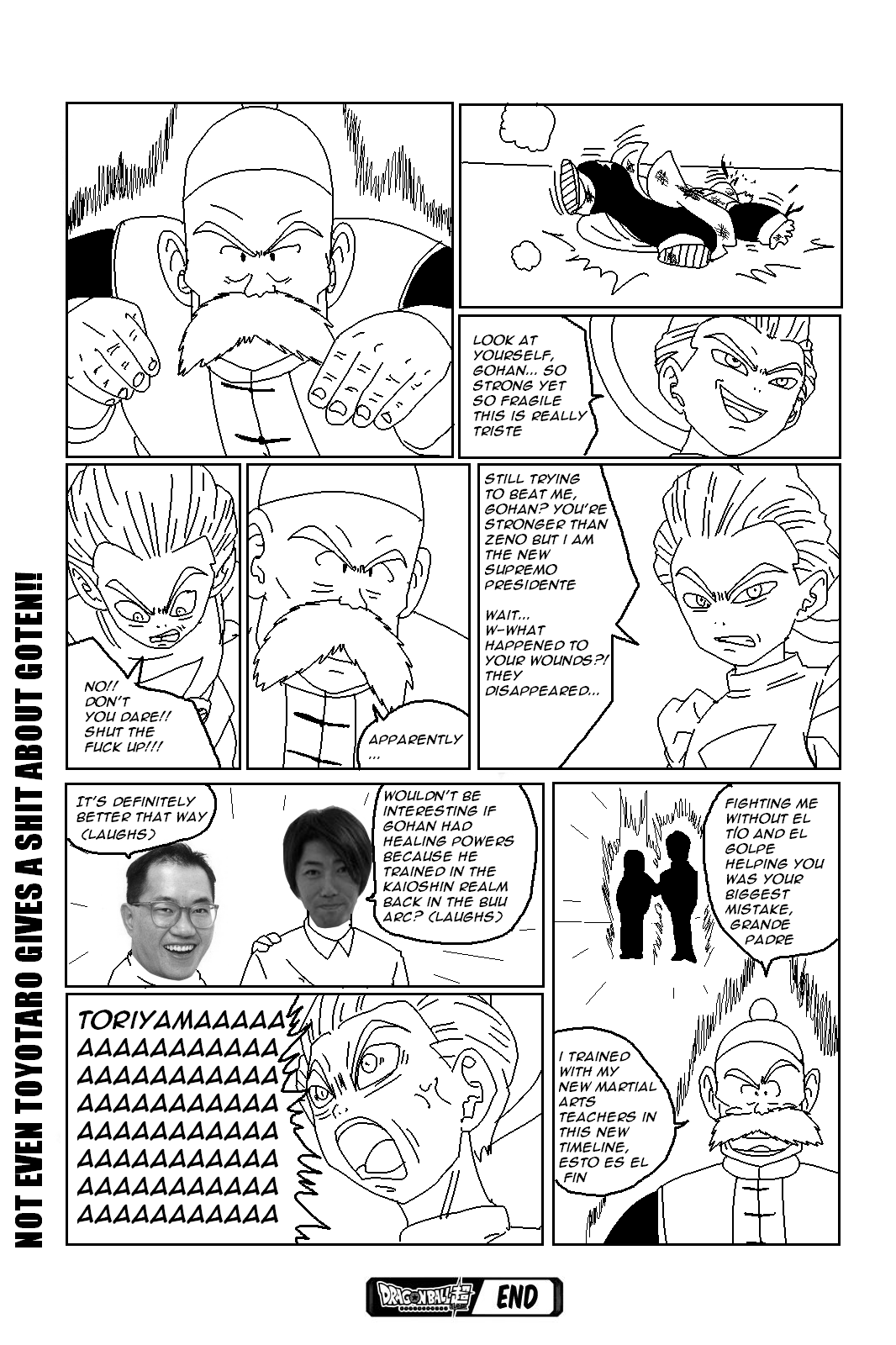 I can't be the only one that is sitting here thinking did Toei really just pulled the ending of episode 128 from a meme/fanfiction? Compare this https://youtu.be/pEO4eKwoM08?t=1m12s to that: https://youtu.be/AYlqDcWvmko?t=51s A coincidence? I think not!

Universe 7 has so much plot armor that when they finally lost more than half their team mates, there were only TWO other teams standing. And Vegeta and Krillin are the only U7 fighters who got taken out in a proper fight without taking someone with him, saving someone else from elimination or doing it out of necessity due to mortal injuries
Favorite Generation: V
Favorite Pokemon per generation: Mewtwo, Jirachi, Giratina, Ferrothorn, Klefki, Mimikyu, Falinks, Tinkaton
Favorite type: Water
Favorite team: Plasma
Most recent shiny: Banette (Scarlet random)
Recent GO legendary: Reshiram
Switch Friend Code: SW-1509-3691-0315
GO: Redjirachi93, 3853 8382 6220

That's certainly a mouthful. I think Super Saiyan royal blue would have been a better title.