Anything in Pokemon games you've regretted

Not much to explain. Have you ever regretted any trade you did ? Either because you miss the pokemon you traded or you got a hacked/weak/ugly/whatever one in return ?
Share your trading tragedies here!


Well, exept for trading a Latios for a hacked Gyarados on wifi, I'll never forgive myself for giving away my level 54 Camerupt for a Rayquaza in Ruby. That might sound odd but, back then, I had no idea where to find it, and that Camerupt was one of the pkmn I beat the elite 4 with... A few years ago, I traded a Glameow on the GTS for a japanese Seadra with a dragon scale attached to it. Turns out the now Kingdra was hacked (it had an ID of all 0's), so I proptly deleted it. Moral of the story: if a trade on the GTS looks too good to be true, then it likely isn't legit.
3DS friend code:1118-0349-6106
Friend Safari: Sliggoo, Fraxure, Noibat

All Hail Meowth!
Trophy made by Pika22

I'm busy with life outside the internet; I won't be on often​
​
P

i regret trading something but dont remember what it was but i got a hacked shiny charizard for it, it was in an ULTRA ball -.-

I gave my friend 1 of my 2 Deoxys, and 1 of my 2 Mews. His sister got ahold of his game. Everything disappeared from it, even the Pokemon I worked hard to get.

Sprite of Brendan created by ~GloomyDayze, sprite of Red originally created by Da-Suspect (Who has vanished from existence, just like Red did...), and the sprite which is a mix between Lyra and Jasmine, I created, myself. The other two I edited for resemblance to my Trainers, Terry and Forme, respectively.
G

I was so happy when I got my Spiritomb with 30 IV's in everything. Then I saw this,
"Met at the Pokemon League"
*sigh*

Cower before ME!
S

I traded my Empoleon, my Diamond starter, on the GTS. I miss it now.
3DS FC (Pokemon X): 1848-1667-7668
Friend safari is Ice with Snorunt, Beartic, and Cloyster. Looking for Dragon safaris, safaris with Whirlipede or Espurr, and Y-exclusive Mega Stones. 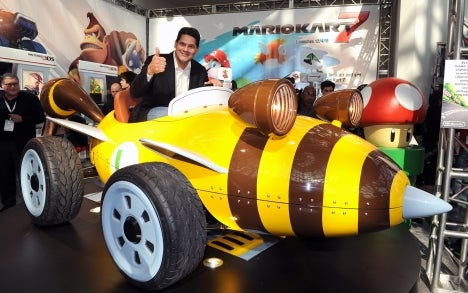 I traded my Empoleon for a Chikorita to some Japanese person. Chikorita was holding a mail that said, "Empoleon! Thank you!"
That was awesome.
Oh, yeah...this is about trading regrets...
I wish I hadn't traded for that hacked Spiritomb!
Echo?
What?

Cower before ME!
S

I traded a Slaking on the GTS for a hacked Latios that was apparently met in Twinleaf Town. Brilliant.
;260;​
H

I stupidly traded my shiny electrode for a female combee!

Credit goes to EzzPeon of the above bar

Come at me bro.

a shiny suicune for a porygon z on the gts. it was adamant natured.

Thanks to Raden Surya for the animation
its been a few years is he still around?​
MyAnime List
pokemon white fc: 3568-2258-6080

I'm looking for some good jrpg games for ps2, message me if you have any good suggestions.​
P

no one? really?
the in-game trade; a Medicham for a Haunter? Sweet! is what I thought.
only to find out it was holding an everstone.
\[T]/ grossly incandescent \[T]/​
E

I gave my first shiny (a Cascoon) to my cousin for a Blissey with only Egg Bomb (it had been an HM Slave on his Emerald, which he'd transferred to Pearl). Mind you, I didn't know about shinies at the time.

the in-game trade; a Medicham for a Haunter? Sweet! is what I thought.
only to find out it was holding an everstone.
Click to expand...

I was burned by that as well, and reacted something like this:

Girl: "Did it evolve? I'm kidding! I gave it an Everstone! Thanks for the Medicham!"

I remember when i was on holliday, at turkey... and a girl as i was messing around the the pool stoppted me and asked me if i liekd pokemon (i had a pokemon beach ball LOL)
She told me that she had poekmon heartgold and we arranged to meet in the lounge in the hotel that evening.

We did a trade and i accidently gave her a level 80 pikachu... she told me she was going to give me a really cool pokemon and i got caterpie... nickname was HER name...
and later that week a some of my new freinds i met told me she wasnt verry nice... so it didnt ruin my holliday since she went a day after i came!!!

holliday was awesome but that was annoying!!! poor pikachu! (by the way the game happend to be her sisters) XD
Here's my own dragon's, Please Visit them, they would love to meet you:

I regret when I once traded a shiny Ditto for a Milotic. It seemed good at the time, but then I notived where it was caught. Caught at Pokemon League. It had been hacked from Diamond, I think. That stunk. I released it into the wild... Sigh...
I heart shiny Oddish. Plz TRADE ME I will accept most any trade offers. I have a shiny Vileplume and a shiny tentecool.
I ;370; pokemon
D

Trading away the legendaries I have catched/transferred in my Pearl at the GTS.

pupintheturd said:
no one? really?
the in-game trade; a Medicham for a Haunter? Sweet! is what I thought.
only to find out it was holding an everstone.
Click to expand...

when i was a relatively new trainer, a traded my trusty raikou(which adored me) that helped me beat the E4 and the Kanto league for a stupid totodile( which became one of the worst feraligatrs in the history of feraligatrs)

i also traded my new suicune for a growlithe (ugh!)

i too, fell victim to the cheap haunter of snowpoint city
i figured my gengar could have a new friend, but nooooooooooo, the stupid haunter held an everstone!!

i traded my latios for a cresselia, which is pretty strong but i miss lati...

i traded my overheat-weilding moltres for a lucario(dont ask, ok?)

then i traded that lucario for jasmine's steelix( i know my typhlosion will never forgive me for trading his first love. typhlosion met lucario in the daycare and gave her her son, a riolu, which is now a lucario and my typhlosion's only son. Quite the pimp, typhlosion moved on to a ditto, and had a cyndaquil which eveolved into a female typhlosion. She inherited her father's player ways and had a quilava with my infernape)