Well, the teasers for next month have been revealed:

First of all, something odd's going on with Spenser but I can't read Japanese so I don't know. Croissant Head's Sceptile and Sudowoodo are fighting until Dusclops breaks 'em up. Then Noland and Brandon appear to be in either an argument or discussion about Jirachi.

Next in FRLG, Green and Blue finally make an appearance as Brinca explains all about Mew and the Faraway Island. Deoxys is still stabbing Mewtwo and it looks like Red's running in to save the latter.

Finally, everything's kicking off in RSE. Ruby's new Milotic and Sapphire's Tropius, Tororo, look engaged to get in a battle with Archie and Maxie. But then Plusle and Minun make a joint Electric attack, which confuses me. Last of all, Ruby auditions for the next Dragonball. Just kidding, he's firing off an energy blast from one of the Orbs. Discussions are now *ding* open.
Your image was too big. Read the rules before you add anything new to your sig.
M

It looks good...but hmm, what's Mew doing there? Personally, I'm avidly following FRLG (although I'm following RSE, too). I can't wait to see how it ends!
Check out my fanfic, based on the PokeSpecial manga (Kanto-arc characters, set post-FRLG):
~~ http://www.fanfiction.net/s/2918915/1/ ~~

My bishie is Lyserg, from Shaman King.

Staff member
Moderator
Translations up, and the first heads off is Vol. 22 is stated to be release over summer, with its content details being revealed in next month's update. Guess RSE is drawing to an end afterall.

From the pop-up, you can also see the cover image of Wonderland vol. 8, coming out this July 15, featuring the pics of the legendary pokemons of Diamond and Pearl, as well as possibly some new little pokemons at the top.

Well, to the plots.

BF:
Spenser is actually weird, and there are actually speculations that Guile is actually just a robot, so maybe Spenser is the one controlling it? I'm glad that they're exploring the Kyogre-like tattoos on the old man, will certainly be interesting to see where this goes.

FRLG:
Yay, Mew's coming. Guess Blue and Green are just gonna set off to find it on the Faraway Island. Meanwhile, the battle between Mewtwo and Deoxys is getting a bit stale, if you ask me.

RSE:
So, all's over. And Mimi doesn't seem to do too much from what I see. So Ruby has a sixth pokemon afterall. Wonder what it is, and if it embodies the healing properties everyone's been speculating in last month's plot thread.

Btw, last month's plot thread had a whopping 200+ replies. While quite a portion of them involves shipping, it's still a record 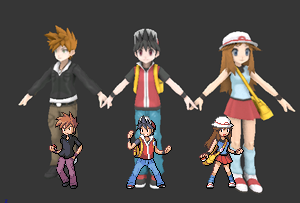 Well, Mimi's story of her swimming away after Ruby hurt her feelings is one of the strongest subplots in the RSE Saga. It also delivers a huge blow to Ruby's narcissist streak.

Oh, so it was a Pokeball! Ruby is also using Mimi to surf, it appears. Can't see why, as that's what Zuzu's for. That sixth Pokemon, though. I wonder if it's that Salamence that attacked Ruby. Probably not, though. T_T Perhaps that Wishing Tag will be the one to heal everything but I feel it might be too minor.
Your image was too big. Read the rules before you add anything new to your sig.
S

Finally it's out!
When I saw Spencer's arm first I thought it was the Kyogre symbol...

I hope Mewtwo and Red can win against Deoxys.

So, the R/S battle is over... But what about all the dead/badly injured guys?
My Trainer Card!

(TC and Banner made by me, banner icons by Pokésho)
(Co-)Owner/Member of:
| Steven Stone Fanclub | Wallace Fanclub | Lance Fanclub | German Speakers Club
and many others.
I claimed Aaron from Lucario and the mystery of Mew as my bishie! I love his hat!
Here's a link to my picture thread
It is sommer holidays now and I'll probably be a bit inactive. ​
L

Ah, good old Manga. Always explains the unexplainable. We finnaly will know what's the deal with Spenser's Tatton's and Kyogre-symboled staff. Though I wonder why Brandon and Noland is arguing?

Finnaly we goes back to Blue and Green. And they are going to find Mew? BORING! They bring it to the battle between Red and Giovanni, Mew saves the day by sending Deoxys back to space, makes Giovanni go back to his chilhood to change his life and then goes hiding again. You rule, Mew. Not.

Ruby's sixth... either it's Salamence or it's something strong random. Which it's not. I am 99,9999% sure that's it's Salamence. Though I wonder how he caught it, it rammed into a building and freed Rayquaza before he could catch it.

What's the relevence of the '3' in the Minun/Plusle panel? And I assume the '6' in the Dragon Ball panel is refering to Ruby's team. I wonder who the sixth is? *thinks hard* Maybe he's refering to Ruru? Or Mimi? More likely it's something entirely new. For some crazy reason I think it's the Salamence that slashed open his head, and he caught it.
Last edited: Jun 30, 2006
M

I think it maybe a pokemon from his father's!!!! O_O If Norman is not going to be back alive, he gets his pokemon, right?

this is a good month (even thought there is no gracefulshippy in it). Guess Wallace is not in this one, right?

“And the admin has always blab on about equality to all title trainers…”
-Flannery, "Going as Friends?" by Eefi-chan (me, of course)

FRLG is meh to me right now. At least Mew will come.

Maybe Ruby's 6th Pokemon is Celebi, which will come out and zap everyone back in time
And I think that Mew looks... strange...
R

Fierce Deity said:
What's the relevence of the '3' in the Minun/Plusle panel? And I assume the '6' in the Dragon Ball panel is refering to Ruby's team. I wonder who the sixth is? *thinks hard* Maybe he's refering to Ruru? Or Mimi? More likely it's something entirely new. For some crazy reason I think it's the Salamence that slashed open his head, and he caught it.
Click to expand...

"Live in the Moment"

The RS arc sounds awesome and look's to be the best this month. maybe i'm being silly but i thought Ruby already had six pokemon swampert,Delcatty, mightyenna, castform, milotic and plusle or is plusle not one of his team member's anyways it looks really good and i'm excited to see what Ruby's next pokemon is.
F

@kyle_andrew: your username is my first and middle name :O
K

"Live in the Moment"

hey weird thats my first and second name too ^ - ^ awesome *Highfive's*
Anyways looking at the pic's Emerald saga look's really interesting too i've had my suspicions about spencer hmm. Wonder what he's up to ?
J

Ruby now have a sixth? I gotta work on my speculation list right now
:club:
Visiting Serebii.net
everyday since the
~ Year 2000 ~
during the Summer​
J

BF - Those tatoos always bugged me. Now we can finally see wtf is going on.

RSE - Oh, it's a Pokémon. Again, I too thought it was a Dragonball move, seeing as how Pokémon are released in clouds of smoke in the manga (like the games)..... not flashes of light.
The final ending is not a matter of whether we lived happily ever after,

But that we lived.​
M

Could it be an Altaria, since it knows Natural Cure?
T

Natural Cure removes status defects, not bring everyone back to life. Now I'm thinking the Wishing Tag could be the thing. There doesn't seem to be any alternative.

I'm pretty confident that Ruby's sixth is the Salamence that set Rayquaza free. This might have to do with a theory of mine that the particular Pokemon has some sort of connection to Rayquaza.
Your image was too big. Read the rules before you add anything new to your sig.