Staff member
Admin
Time for the next in our Scarlet & Violet Pokémon of the Week and twe're continuing the starting theme of the Starters! 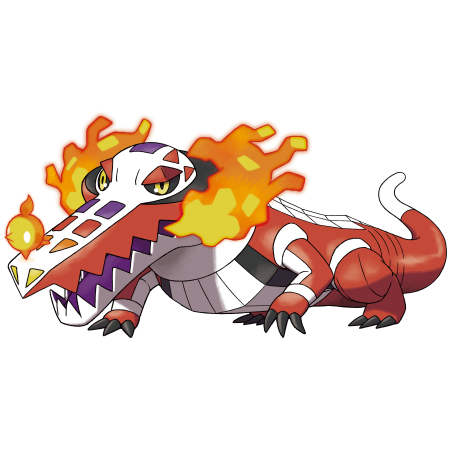 Funny how we all wanted the Grass starter to remain four-legged yet it was the Fire starter that ultimately evolved to be on all fours. I don't think anyone was expecting the final evolution to look like this. A flaming skeleton croc...that can sing? Another surprise is that it's a tanky special attacker with access to Fiery Dance 2.0 and a recovery move in the form of Slack Off. While I am not as huge a fan of its design compared to Meowscarada, Skeledirge has a lot to offer the competitive metagame, even when competing with a lot of the powerful Ghost types released this gen.

Set Details:
Spam Torch Song since it will jack up your special attack with each use, and use Shadow Ball to get near perfect coverage as your secondary STAB. Flame Charge is there to boost your middling speed stat to a more reasonable tier after a few uses, and Slack Off helps you recover health when needed as you slowly net stat ups. Leftovers gives you extra recovery, and your nature plus EVs are put into HP and speed so you have enough bulk to give you an opportunity to set up and enough to make use of Flame Charge. Unaware is also helpful as your ability since it will let you set up safely on other stat up users.

No war but class war

Skeledirge is an interesting case of a Pokemon. Fire/Ghost, while traditionally awkward defensive typing, does give it some key resistances and immunities to work with. An immunity to Fighting, along with resistances to Ghost, Bug, Grass, Fire, and Poison among others, let Skeledirge wall some scary threats like Iron Valiant, Volcarona, Iron Moth, and Breloom. Unfortunately, outside of that select handful of threats... that's about all Skeledirge walls, at least without Terastalyzing. Many of the tier's scariest breakers can threaten Skeledirge with their STABs, such as Chi-Yu, Annihilape, Chien-Pao, Dragapult, Gholdengo, Great Tusk... the list goes on and on.

Terastalyzing can help mitigate some of these problems, turning Skeledirge into a Clefable-at-home or Suicune-at-home, softening blows from the likes of Dragonite, Annihilape, or Dragapult, but many of these breakers will destroy Skeledirge no matter what he Terastalyzes into, such as Chi-Yu. Spreading Will-O-Wisp on switches helps immensely as well, as a threat like Great Tusk or Annihilape, if it lacks Rest, becomes much less scary after a Burn.

Torch Song is a neat little STAB move. 80 base power and guaranteed to raise the user's Sp. Attack. It's also a sound move and thus bypasses Substitute, which can be helpful with things like Shed Tail and Substitute + Nasty Plot Gholdengo running around.

Hex is a pretty solid Ghost STAB, especially against a status-afflicted opponent. Skeledirge pairs fantastically with Toxic Spike setters like Glimmora to help break down bulkier opponents, but needs to be a bit cautious as Toxic Spikes can prevent Skeledirge from Burning an opponent that it needs burnt to wall.

Speaking of burns, Will-O-Wisp comes in to neuter the Attack stat of threatening physical attackers like Great Tusk and Iron Valiant, and in general is just a great move to toss out if you're worried about what your opponent might bring in. A lot of the Pokemon that threaten Skeledirge are physical attackers and thus hate burns.

Slack Off is pretty self-evident. Recovery keeps Skeledirge healthy to wall threats throughout the course of the match. Be somewhat sparing with it as its PP (along with the PP of all other recovery moves that were formerly 10/16) was nerfed to 5/8 in SV, which limits your ability to indefinitely stall opponents the way defensive Pokemon were capable of in previous generations. Running Leftovers over Heavy-Duty Boots can alleviate some pressure from Slack Off if you find yourself running out of PP regularly, but Skeledirge is vulnerable to all forms of hazards and with Gholdengo seeing significant popularity and a lack of reliable defoggers that can beat it, removing hazards is sometimes easier said than done.

EV spread is customizable. Max Sp. Def synergizes well with Will-O-Wisp but if you have a dedicated special wall like Blissey, investing more heavily into physical Defense to take physical moves before Will-O-Wisp lands is a fine idea as well. A couple of the Pokemon that Skeledirge can wall, most notably Iron Valiant, have the ability to go mixed, so that should be accounted for.

Probably the single biggest shut-down to Skeledirge is Chi-Yu. Modest Specs 2HKOs with a resisted Overheat, to say nothing of Dark Pulse, frying all forms of Terastalyzed Skeledirge in the process, while resisting both of Skeledirge's STABs and being immune to Will-O-Wisp. Chi-Yu is an absolute nightmare for Skeledirge's teammates to switch into as well; even Blissey can be 2HKO'd in the sun if Chi-Yu Terastalyzes. Dondozo also doesn't overly care about Will-O-Wisp as it usually runs Rest, ignores Torch Song boosts thanks to its own Unaware, and can wear down Skeledirge with Liquidations and Rest + Sleep Talk. As mentioned before, many other Pokemon have the ability to 0-2HKO it even if they don't switch in as cleanly.​
"Only when the last tree has been cut down, the last fish caught, the last stream poisoned, will we realize we cannot eat money."

Skeledirge is an interesting Pokémon. One of 3 new Unaware users, Skeledirge gets a lot of hype for that ability alone, as it is an all around excellent ability that has ensured that Clefable and Quagsire have seen consistent use throughout the years. And unlike other potential defensive staples, Skeledirge has the reliable recovery to remain as one, thanks to Slack Off. Torch Song is an insane STAB, enabling Skeledirge to forego Special Attack investment and just self ramp while applying offense. Even being part Ghost works in its favor, enabling it to avoid being trapped by Dugtrio and Gothitelle, who have seen historic use as wall eliminators thanks to their trapping abilities.

However, all is not good for Skeledirge. While Fire has the second most resistances in the game after Steel, like Steel its weaknesses are very common. Additionally, despite having such an amazing setup move, Skeledirge is rather slow so even when ramped up it is not difficult to revenge KO.

Doubles Formats add other wrinkles. While Unaware is great for ignoring Weakness Policy and other setup strats, Skeledirge is still very vulnerable to stat dropping tactics such as Intimidate, Snarl, Parting Shot, Eerie Impulse and Screens which can cut its damage to shreds. Additionally, Skeledirge also ignores your own stat dropping tactics, so Intimidated Pokémon will still hit for full damage. Being weak to many common types in doubles (Rock Slide, Earthquake, Surf/Muddy Water, Snarl) further worsens Skeledirge's defensive profile.

But if typing is the problem, just Terastalize. Skeledirge is an example of an excellent defensive terastalizer, thanks to its great base defensive profile. Go pure Water for minimal weaknesses or Fairy to become Clefable-lite. I do not see Skeledirge as the most consistent Pokémon in doubles, but when trends are leaning towards setup sweepers to close out games, you know that Skeledirge will rise to meet the onslaught.

Skeledirge functions similarly in Doubles as in Singles, using its great bulk to stop setup sweepers in their tracks. However, the most popular setup sweepers are currently Garchomp, Gholdengo, Rotom-Wash, and Dondozo, all of whom normally steamroll Skeledirge thanks to their super effective STABs. So Terastalizing Skeledirge to avoid those weaknesses is a must (though baiting out the attacks before Terastalizing can buy you precious momentum). Otherwise, the set is what you expect -Protect is the best move in doubles, Slack Off gives Skeledirge amazing longevity, Torch Song is STAB that prevents Skeledirge from being completely passive and Shadow Ball is just alternative STAB.

Other Options
Snarl -Skeledirge gets this great Attack... but it does nothing for Skeledirge as it ignores its opponent's stat drops as well. Skeledirge's teammates will thank it though.
Will-o-Wisp -Great for shutting down Physical Attackers and Skeledirge does pay attention to burns at least.
Encore -An incredibly brutal move in Doubles -forcing an opponent to repeat Fake Out, Protect, Screens, Weather, etc. near guarantees a switch out, turning a situation into a 2v1 for a time.
I was once routed by a Gengar who critted 4 times in a row on my team. Morale of the story; Crits happen and Sucker Punch is good Gengar repellent.