Staff member
Admin
Time for the next Pokémon and this week we're going to Alola and Kanto! 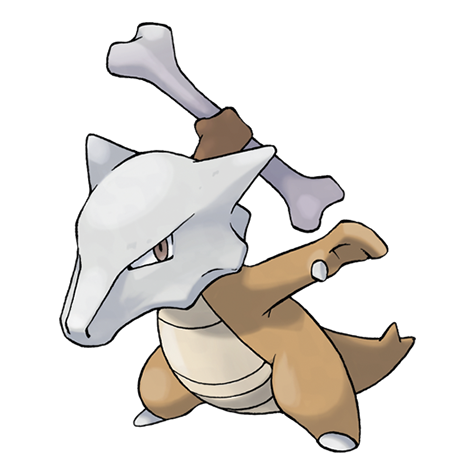 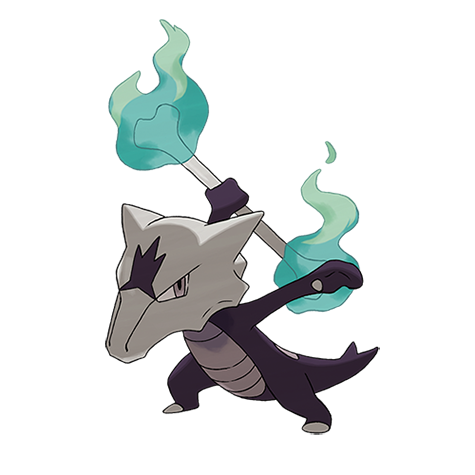 Go nuts!
I own Serebii.net and Serebiiforums.com

Marowak has had an interesting history. Beginning as a subpar ground-type in Gen I, Marowak was fully outclassed by Sandslash, before turning it around in Gen II when it received its Signature Item Thick Club. Ever since Marowak has brought the pain off of a massive attack. However, as the generations passed by Marowak has fallen lower and lower as its poor speed, poor typing and special bulk prevent it from exercising its power.

However, Marowak received an Alolan Form that turned around its fortunes. Ghost Fire is an excellent defensive combination, especially with the possibility of picking up another Immunity with Lightning Rod... or having a Recoiless Flare Blitz thanks to Rock Head. Additionally Fire and Ghost hit many targets that Kantonian Marowak cannot giving it amazing coverage. However that poor speed and common weaknesses still hold Marowak back, making it easy to revenge kill. But have it come in at the right moment and watch as it tears holes in the opposing team.

Marowak is a wallbreaker par excellence. Have it come in on any wall and watch Marowak eat them alive:

Long story short, A-Marowak wrecks Steel types. Most of them are too slow for A-Marowak and A-Marowak always has a way to hit them for Super Effective. And with Steel being the most popular defensive type in the game, that is the core of many team's back bones. And those that aren't weak to Steel are weak to either Earthquake or Marowak's Ghost STAB.

As for move choice, Poltergeist is an amazing Physical Ghost STAB, but if you are running knock off or if your opponent is using consumable items, you may find yourself without a Ghost STAB on key targets, which can make Shadow Bone a more reliable choice (the DEF drop chance doesn't hurt either). Bonemerang is a niche option over Earthquake, allowing Marowak to blow by Substitutes. Last move is up to preference Stone Edge hits a few targets (Mandibuzz, Cloyster) that its other moves miss, while a well timed Swords Dance enables Marowak to OHKO just about everything.

Other Options
Will-o-Wisp -Good for catching predicted switch-ins, though more often than not, A-Marowak would be better off hitting them
Stealth Rock -Best move in the game and splashable on just about every set.

Preferred Teammates
Trick Room -Both Marowaks love Trick Room thanks to their slow speed. While that will require tweaking natures, EVs and IVs, Marowak thrives in Trick Room as a speedy juggernaut able to take out many threats before they can hit it.

Dark/Fighting/Fairy Types -Alolan Marowak enjoys having partners who can absorb a Knock Off for it. Dark types include Grimmsnarl (great team player that makes A-Marowak bulkier or paralyzes opponents, can wreck STAB knock off users) and Zarude (who also serves as an Anti Water/Ground check, pivots well with U-Turn and enjoys A-Marowak taking out opposing Fire and Steel types ). Fighting types enjoy A-Marowak being a soft check to Slowbro, Toxapex and Necrozma as well as pivoting into Fairy moves for them. Fairy types in general just adore A-Marowak's tendencies to break Steel types, with Primarina enjoying A-Marowak's anti Grass tendencies instead, Togekiss spreads around Paralysis, making A-Marowak's life easier and can switch into Ground moves as well.

Countering Marowak
Marowak is easy to revenge kill. Base 45 speed is not hard to outspeed and a myriad of weaknesses (Ground, Water, Rock, Dark or Grass, Water and Ice) that are so common that every team will have them on top of a poor SDEF and exposure to every entry hazard with no way of increasing bulk due to its reliance on Thick Club means that Marowak will almost never make it to the end of a match. However, KOing it without it ripping a hole in your team is another matter entirely.
Knock Off is amazing vs both Marowaks. While A-Marowak may be weak to it, no Marowak likes losing its club as its power is very underwhelming without it. Item disruption in general is good, as Marowak lives and dies by Thick Club, so if you remove that, than Marowak's utility is greatly reduced.
I was once routed by a Gengar who critted 4 times in a row on my team. Morale of the story; Crits happen and Sucker Punch is good Gengar repellent.

It should be noted that it is impossible to get an Alolan Marowak outside of a transfer from Sun/Moon through Pokemon Home or that one you get as a reward for finding 50 Alolan Diglett on Isle of Armor. Don't bother using a Dusk Stone, it won't work. That said, let's try an make a set using Kantonian Marowak instead:

Set Details:
An all-out attacker that suffers in the speed department, but is still useful to break through defensive walls. Earthquake an ever reliable STAB but Bonemerang is worth a mention thanks to its Substitute breaking capabilities albeit at the cost of 10% accuracy. Stone Edge has infamous neutral coverage with Earthquake, hitting Flying types with no sweat as well as the Bugs. Double-Edge synergizes well with its ability Rock Head which removes the recoil and offers a powerful all around neutral coverage move. The last slot is for Fire Punch which keeps Ferrothron and the Bug/Steel types checked, but subsequently you could just boost your already insane Thick Club boosted attack even higher with Swords Dance and just Leeroy Jenkins your way to victory. Marowak is still super slow though, so max speed in nature and EVs are needed to get at least some mileage out of that insane attack power.
Last edited: Oct 12, 2020