Staff member
Admin
Time for the next Pokémon and this week we're back to Galar ahead of The Crown Tundra! 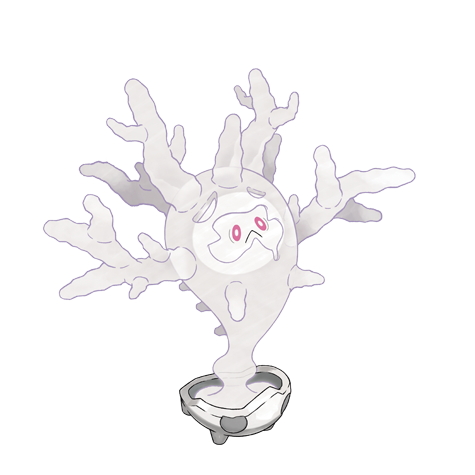 I was hoping for Zacian. Since the anime is doing that Sword and Shield chapter for the next four weeks.

Coral bleaching is a real problem in the reefs around the world no thanks to climate change and the population explosion of crown of thorns starfish (Toxapex), and it seems GameFreak got the word out about this serious environmental problem by creating a very unnerving Galarian variant of a gen 2 Pokemon widely considered to be useless in the competitive scene. Ironically enough, making Galarian Corsola far more viable will probably only make trainers want the reefs to die off faster in apocalyptic waves: 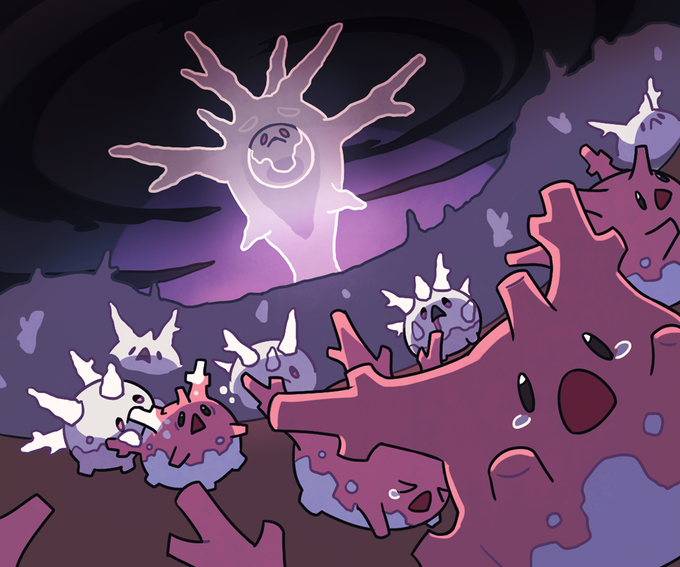 Anyways, G. Corsola is better than its pink cousin thanks to better defensive typing, more crippling moves like Will-O-Wisp, access to Strength Sap, and because it gets an evolution which means it gets a powerful fully evolved form as well as a defensive pre-evolved form thanks to Eviolite. So let's get straight into the nightmare fuel that is Cursola and its pre-evolution.

Set Details:
Cursola's speed is...terrible. Seriously, GF should have at least given it respectable physical defenses to compensate, but nooooooo they just had to make it slow AND physically frail. They could have at least given it Trick Room to compensate, but apparently it isn't as Ghost-like as Dusknoir and Runegrigus to justify it. XP So Cursola will be dependent on teammates to set up Trick Room for it. Choice Specs boost its base 145 special attack even higher, and thankfully Cursola has a very wide offensive movepool to make use of. Shadow Ball is a given, but the other three moves are a matter preference. Ice Beam targets Dragons, Hydro Pump has excellent power, Giga Drain punishes defensive Water/Ground types AND offers a form of recovery, Earth Power targets a wide range of types for super effective damage, and Burning Jealousy is a nasty surprise for Ferrothorn and the Bug/Steels. All EVs and nature get put into special attack and HP while all efforts are made to keep Cursola's speed as slow as possible to best utilize Trick Room. Also, go with Perish Body as the ability since the unexpected speed boost after surviving a physical attack will ruin the reliance on low speed. Just don't expect the Perish Song effect when it activates to be all that useful outside of forcing switches.

Set Details:
Let's be honest. Everyone is going to use G. Corsola over Cursola thanks to far better usage as an Eviolite wall than as a slow and frail sweeper. How ironic that Corsola is now sitting in the same club as Toxapex as one of the game's best defensive Pokemon despite the entire reason for it being there is because it was probably eaten by that very same Toxapex. Yesterday's prey is now today's defensive teammate. Will-O-Wisp ruins physical attackers and does residual damage over time. Your choice of offensive move is a toss-up really since Hex synergizes well with Will-O-Wisp's burn and gives G. Corsola some decent fire power despite the low base special attack, and Night Shade is consistent and reliable damage. The former works better on frailer targets while the latter is better on defensive ones. Strength Sap is leagues better than its Johto cousin's Recover since it almost always heals more than 50%, all while dropping your opponent's physical attack in the process, granted special attackers may present a more difficult survival issue. The last slot is actually an original choice from yours truly, and I have had a great deal of success with Whirlpool. Not only does it keep your opponent from switching in a counter, but it also eats away 1/8 of your opponent's health each turn, thus hastening your opponent's demise. Ability goes to Cursed Body since Weak Armor's defense drop is crippling to a defensive Pokemon and the speed boost is not worth it. Conversely, the chance of disabling one of your opponent's moves with Cursed Body is an added bonus that can keep your opponent from using its best moves against you. Eviolite is integral to giving G. Corsola the extra defense it needs, and the nature and EVs are similarly poured into bulk. So yeah, G. Corsola is a top tier threat that everyone should be prepared to face. Though I still think it's kind of sad that it took killing the poor pink coral boi for anyone to love it...

Also, I can't be the only one who thinks Galarian Corsola's design looks like something stright out of a Creepypasta right? ()'
Last edited: Oct 18, 2020

This is the set I've often used in competitive and so far is my favorite for it focuses on a benefit of Cursola that almost no one talks about.

Thanks to Curosla's already excellent Special Attack, there's no need to invest in it, allowing more options for Cursola. An often overlooked addition of Curosla is it's amazing Special Defense, combined with investment with it's HP, has made it the bane of many Special Attacker's existence. Paired with Assault Vest and even Hydreigon will be shocked that not only can Cursola tank it's attacks, but fight back with it's already good Special Attack. If perhaps you want a little more firepower, natures are important here for the Modest Nature is a decent little improvement to cap it's uninvested Special Offenses. Though, for me personally, I went for Special Defense Bulk. With that said, thanks to such a Bulky Special Attacker, it can even function really well without Trick Room due to it's Special Tank role.

Of course the thing you must watch out for most are Physical Attackers and that's where Dynamax comes to play. In the Dynamax meta, Cursola benefits greatly from Dynamax with an increase to it's lackluster HP, making it as annoying as a regular Chansey. Even Dynamax Hydreigon would get greatly annoyed from an Assault Vest Cursola and with Choice Specs, Hydreigon would need two hits to defeat Assault Vest Cursola without Dynamax. To get how strong it is, Rapid Strike Urshifu Choice Band would need two shots to defeat Cursola in Dynamax. WIth all these benefits in mind that Cursola can use without Trick Room, now imagine it with Trick Room in-place and even physical attackers could be in trouble which is where Expert Belt + Modest Natures come into play if you want a bit of extra fire power to increase your chances of one-shotting certain Pokemon. However, there are of course some Pokemon that can easily defeat Cursola even under Dynamax. Cursola's biggest nemesis, Single-Strike Urshifu. Even through Dynamax and Trick Room, Cursola is no match for a Single-Strike Urshifu without Choice Band and even without Dynamaxing. Even with Trick Room giving Cursola the first move to strike, Cursola lacks any supereffective moves to strike Single-Strike Urshifu down. Of course this is where Perish Body does it's thing but in the advent of keeping Cursola on the field as long as possible, Single-Strike Urshifu is a bane to it's existence.
Last edited: Oct 19, 2020