Staff member
Admin
Time for the next Pokémon of the Week and this week we go back to Alola! 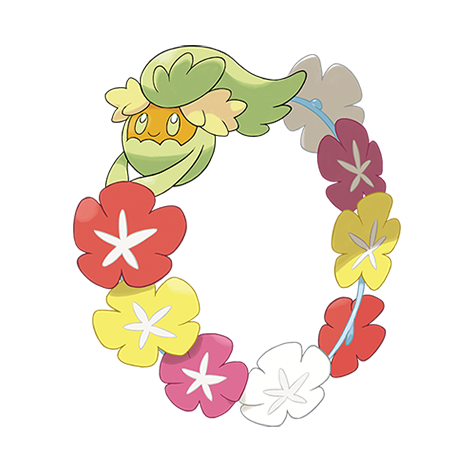 This is a weird one. Based on its unique move and one of its abilities, Comfey seems geared to be a Grass-type/Grassy Terrain supporter. You could focus solely on one or combine the two, given that its best partners are Rillaboom and Tapu Bulu (since both have Grassy Surge). I would also say that it is best to have a partner set Grassy Terrain rather than have Comfey do it itself.

There isn’t that much to this set. Dazzling Gleam is the best STAB attack available. Flower Shield helps regardless of terrain presence. Floral Healing is used on Grassy Terrain only, as is the Grassy Seed. Otherwise, use another support move like Helping Hand or Pollen Puff (which can deal damage or heal).

On it's own, Comfey didn't look like much when it was released back in gen 7, and that it was little more than a thematic Pokemon created in reference to the tropical region it is based off of. But once players realized that Triage granted a +3 priority to all HP recovery moves (Including the offensive draining ones) Comfey suddenly went from being a superficial Pokemon symbolizing island vacation comfort to a surprise defensive cleric that lives and breathes recovery as a lifestyle on the battlefield. If you find yourself faced off against this tropical fairy, be sure to take the threat seriously or this lei will lay your team out to dry after sucking them dry of their health.

Set Details:
A Sub-Seed set that takes advantage of the +3 priority granted by Triage to Synthesis and Draining Kiss. Set up Leech Seed (NOT boosted by Triage), hide behind a Substitute while slowly draining away the opponent's health so you can keep using Substitute, and recover with priority Synthesis when Leech Seed isn't cutting it. Your exclusive offensive move is Draining Kiss which despite the low base power and PP also gets the Triage boost and provides 75% recovery for every point of health you take away. Leftovers adds even more recovery each turn while your nature and EVs are focused exclusively into bulk.

Set Details:
This time let's focus on the offenses as well as the defenses. Set up Calm Mind to increase the power output of priority Draining Kiss and by extension the amount of HP you get back from the damage. Synthesis helps recover your health as you slowly set up more Calm Minds, but be weary that it only has 5PP compared to other recovery moves and can be enhanced or hampered depending on the weather. The last slot is honestly a matter of preference and your battle playstyle. Aromatherapy keeps you and your teammates safe from status hazards but most notably bad poison (Just again note the PP is only 5), Leech Seed provides extra damage and recovery as you set up Calm Minds, Substitute blocks most status moves and intercepts attacks at the cost of 1/4 health, and Giga Drain offers some secondary offensive coverage that also benefits from Triage. Same Bold nature and Leftovers from the first set, but Big Root may be an option too since it jacks Draining Kiss's 75% drain rate to almost 100% allowing you to keep the offensive pressure without relying too much on non-offensive Synthesis for recovery. Also, since Calm Mind boosts special defense, you can actually invest EVs exclusively into HP and defense this time.
Last edited: Jan 17, 2021

Comfey is unique in doubles in its niche of providing speed control with priority healing support. While its HP isn't all that good and its offences are also quite poor, priority healing is very useful, being able to heal a partner before an enemy can strike it to finish it off regardless of speed tiers can be a game changer, especially if Grassy Terrain is active.

Draining Kiss and Giga Drain deal roughly the same amount of damage after STAB, but Draining Kiss heals Comfey more. Giga Drain provides slightly different coverage and becomes stronger under Grassy Terrain, and both moves get priority thanks to Triage, allowing Comfey to go first regardless of speed tiers or Trick Room. Floral Healing heals Comfey's partner and gets an extra boost in Grassy Terrain to heal more. Tailwind and Trick Room both provide different kinds of speed control, it depends on your team which is most beneficial, although having both on the same set is generally ill-advised. Some teams benefit more from Tailwind, others more from Trick Room. Note that Tailwind has to come from USUM tutor. Comfey itself doesn't really care one way or another, all of its other moves getting +3 priority and going first regardless. Grassy Terrain is another option for the final move if the speed control isn't needed as much, allowing Comfey to set it up itself and remove Psychic Terrain which would block Comfey's Draining Kiss and Giga Drain (as you usually don't want to Dynamax Comfey). Sitrus Berry gives Comfey a bit more staying time on the field, but can be replaced with Babiri Berry depending on the opponents that are popular, or even Mental Herb to negate Taunt once so you can still set up Trick Room or heal. Grassy Seed is also an option to increase Comfey's bulk if you have a reliable Grassy Terrain setter in your team. Max HP is the primary EV investment for Comfey as its base HP is not that great, investing a lot of EVs in it gives it a significant boost to bulk. And since its primary purpose is supporting rather than attacking bulk is generally preferred over special attack.

As partners, Rillaboom sets up Grassy Terrain and offers Fighting coverage to deal with Steel types. Heatran can also be very good, benefitting from Grassy Terrain weakening Earthquake and Heatran can come in easily on Steel, Poison, and Fire attacks that are aimed at the Grass types that like Grassy Terrain being up, while being threatening to steel types itself. Heatran benefits from the frequent heals that Comfey can provide, giving it a big boost to its bulky nature, and also likes either Trick Room (for slow Quiet builds) or Tailwind being up. Alolan Exeggutor is a bit of an oddity, but it likes Trick Room and its Grass moves can set up Grassy Terrain when Dynamaxed. Exeggutor also has Flamethrower to threaten Steel types, and can set up sun with that Flamethrower when Dynamaxed, which can combine well with its Harvest ability (if running berries on it).

Flower Shield may seem like an interesting option, but only giving a +1 in a defensive stat is quite poor boosting, and in the worst case it could boost an enemy as well. It's also limited to Grass-type partners. Aromatherapy, Protect, Dazzling Gleam, Substitute, all largely better options than Flower Shield, even aside the ones I listed in the set.
Pollen Puff is largely inferior to Floral Healing. Although it can also be used offensively, losing the Triage priority on it is too much of a loss and it also doesn't benefit from Grassy Terrain.