Staff member
Admin
Time for the next Pokémon of the Week and this week we're going to Unova! 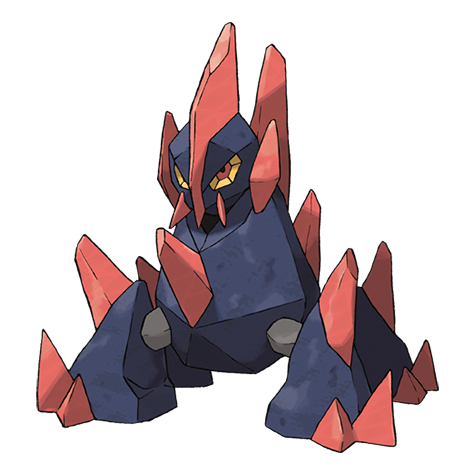 It seems that every other generation we get a spiritual successor to Rhydon in that it has excellent HP, attack, and defense and is typically a Rock type. We have Rhydon, Tyranitar, Aggron, Coalossal, and of course Gigalith. One of Cheren's offensive aces and every Rock collector's dream, Gigalith got a boost in gen 7 when it got access to the previously rare Sand Stream ability, however Gigalith has otherwise remained pretty unchanged since its introduction in gen 5. It hits hard, can take hits, but is incredibly slow and has no access to reliable recovery. If there was a means to rectify those last two issues Gigalith probably would be more widely used, but sadly Gigalith just lacks that extra "oomf" that the previous Rhydon clones have. It can't run an Eviolite set like Rhydon, Be the tanky powerhouse that is Tyranitar, wreck opposition like no recoil Head Smash Aggron, or Rapid Spin like Coalos...on second thought don't use Coalossal. Just don't. Instead, let's just focus on this crystal crusher.

Set Details:
Set up Curse to increase offensive output and defensive bulk at the cost of an inconsequential speed drop, Stone Edge will be your main STAB but Rock Slide is a good alternative if the low PP is a turn off, and Earthquake synergizes well with your Rock STAB. The last slot is a toss up depending on your preference. Body Press is good Ferrothron repellent and fills any holes that Rock and Ground do not cover, Stealth Rock is always a good option so the opposition feels the entry damage long after Gigalith is gone, Gravity pairs well with Stone Edge and Earthquake since it makes the former 100% accurate and the latter able to hit Flying types and Levitators, and Rest is your only recovery option if you are truly invested in keeping Gigalith around longer. Ability goes to Sand Stream since it serves as a means to inflict residual damage and provide an extra 50% boost to its special defense when active, item obviously goes to Leftovers to make Gigalith last as long as possible, and nature and EVs are focused on HP and special bulk to shore up defenses in its weaker stat.

Set Details:
Now to focus a set that's more offense and less set up. Assault Vest shores up Gigalith's special defense which in tangent with Sandstorm allows it to take special attack incredibly well. In an all-out offensive assault we obviously have Stone Edge and Earthquake in prefect harmony, Body Press or Superpower handles Ferrothron and most threats that can take the Rock/Ground combo, and the last move is your choice of coverage. Iron Head punishes the Fairy types, Throat Chop gives Psychic and Ghost types a nasty surprise, or you could just kamikaze yourself with Explosion if you want to throw reckless abandon at your opponent. Nature and EVs this time are focused on HP and Attack.

Sandstream was an Arceus send for Gigalith, patching up its less than stellar SDEF, and providing chip damage on what is already a powerful, if slow offensive pokémon. Base 135 ATK and 130 DEF are nothing to scoff at and Gigalith's movepool is surprisingly wide, especially with the addition of Body Press this generation.

Gigalith has two distinct advantages over Tyrannitar: Fewer weaknesses due to being mono-rock (including no crippling 4x weakness) and being much slower than godzilla-lite. This enables Gigalith to thrive on Trick Room Sandstorm teams, able to outslow the competition and crush everything in its path. Protect is mandatory doubles fare. Rock Slide is STAB of choice, hitting both targets in doubles and under Trick Room, having a nasty flinch chance. Stomping Tantrum and Earthquake are great as the Rock/Ground combo is well known for its great type synergy. Stomping Tantrum is single target and doubles in power if the move is nullified by Protect the previous round, while Earthquake is another spread move, and has a higher base power in the 1v1 situations. Body Press rounds out the set with fantastic coverage, coming off of Gigalith's nearly as impressive Base DEF, hitting targets like Ferrothorn, Porygon2, and Kartana hard.

Sitrus Berry is for some spot recovery, while Weakness Policy synergizes well with Gigalith's bulk, as it can often stomach a super effective hit and go to town with boosted attack.

As for EV spread, max out HP to make Gigalith as bulky as possible, and either Max out ATK for consistent damage or Max out DEF for Body Press and rely on the Weakness Policy Boost.

Other Options
Air Balloon -Good when partnering with an Earthquake user... though any priority will cause Gigalith to come crashing to the ground.
Wide Guard -Blocks the Earthquakes, Surfs, and Muddy Waters that Gigalith hates. Can completely shut out some pokémon depending on the move set.
Gravity -Works great in doubles when you want to whack Celesteela and Zapdos with a ground move and ensures the oft unreliable Rock moves don't miss.

Dynamax Corner
Gigalith is a good contender for a bulky Dynamax variant: its high base DEF and the Sandstorm from its ability and Max Rockfall patching up its SDEF make Gigalith stupidly bulky when you double its HP when Dynamaxing. Max Quake and Max Steel Strike further bolster Gigalith's insane defenses while Max Knuckle buffs up Gigalith's ATK to new heights. However Gigalith has no recovery and will move second outside of Trick Room, so be wary of it getting worn down before dynamaxing.

Checks and Counters
Burning Gigalith will stop most of its offensive presence in its tracks, though Sand Stream is the real problem as Gigalith will likely have teammates to abuse it. A counter weather strategy will nullify the setup and will force Gigalith to come in more times, which combined with often acting as a defensive pivot and entry hazards can cause Gigalith to get worn down quickly.
I was once routed by a Gengar who critted 4 times in a row on my team. Morale of the story; Crits happen and Sucker Punch is good Gengar repellent.