Staff member
Admin
Time for the next Pokémon of the Week and this week we're going to Kalos! 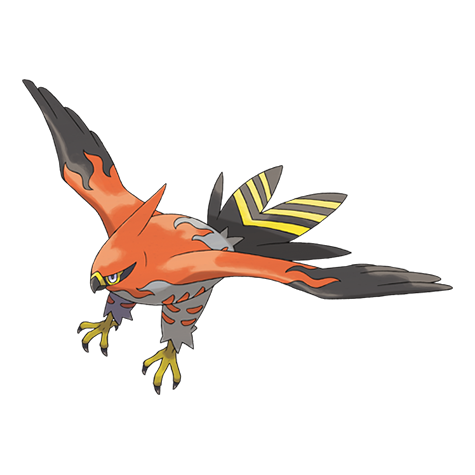 Ah yes, the bane of X/Y. While Stealth Rocks have hindered a lot of Pokémon, the change to Gale Wings in ORAS really hurt Talonflame’s viability. You either need to have a method of dealing with the rocks beforehand, or run Roost to bring its health back up. (Since you will not be at full health, Roost won’t have the increased priority)
Also, all of its best STAB moves have recoil. This means if you want to maintain Gale Wings, you are stuck with Flame Charge as a Fire STAB; and your best Flying options are either Dual Wingbeat or Acrobatics (no item to maximize power).
Overall, I wouldn’t say Talonflame is bad, but it is now somewhat situational and requires some outside help.
Last edited: Jan 31, 2021

The Gale Wings nerf was stupid and really screwed Talonflame up. They should have made more counters if they thought it was so balanced rather than a nonsensical meme. It's not even that bulk and has the crippling rock weakness.
Goh Club Member. Are you a Goh fan? Come visit us!

When Talonflame was introduced it redefined what it meant for an early game bird to be good in competitive. Gale Wings, an utterly broken ability that gave the wielder Priority to all Flying moves turned what was an unimpressive bird Pokémon into a member of Gen VI's bird spam, throwing out priority Brave Bird after priority Brave Bird, ripping chunks in the enemy team and healing off the recoil with Roost before anyone could react. Well Game Freak took notice and nerfed Gale Wings with a very crippling restriction of requiring the user to be at full health, thus only allowing one turn of Brave Bird and no priority healing. And thus Talonflame has fallen out of favor. At least Heavy Duty Boots prevents Talonflame from being wrecked by Stealth Rock.

This set works as a late game cleaner. Come in late game when all of Talonflame's checks have been removed, preferably on something Talonflame scares out, Swords Dance, and then start smashing the opponent with STAB Brave Birds and Flare Blitzs. Talonflame actually possesses some respectable power after a Swords Dance:

In short, anything with defensive investment or resists will be able to stomach a hit, but almost certainly not two.

Dynamax
This set was specifically built in mind to abuse Dynamax. Come in, Swords Dance Up and proceed to smash the opponent with 3 consecutive turns of a +2 Gale Wings Base 140 before STAB Max Airstream, enabling Talonflame to relive its glory days and be nigh unoutspeedable once Dynamax drops.

Talonflame has a near unique niche in VGC in that it is one of only two Priority Tailwind setters in the game, the only other being Whimsicott, which Talonflame naturally outspeeds. This enables Talonflame to easily setup a Tailwind with little to no counter play outside of using Extremespeed, Feint or Fake Out. Having one of the fastest Taunts in the game does not hurt either, and enables Talonflame to stop the opposing team's setup before it starts. Remaining moves are up to personal preference. Will-o-Wisp can mitigate several physical attackers that may not be bothered by Intimidate or other attack lowering shenanigans, while Quick Guard is great Anti Priority that can block Fake Outs and other attempts to pick weakened targets off. Last move is whatever STAB move floats your boat and ensures Talonflame can provide a little offensive pressure if need be.

Focus Sash is to ensure that Talonflame survives at least one hit, while Safety Goggles prevents Sandstorm and Hail from breaking Gale Wings as well as completely shutting out Amoongus and its attempts to redirect or Spore.

Checks and Counters
Rock types are a consistent thorn in Talonflame's side, having high Defense and a resist to both of its STABs and able to easily threaten the OHKO. Rotom Wash and Heat are similar, though they do get chipped a bit hard by U-Turn. Knock Off will remove Talonflame's Heavy Duty boots, so if it pivots out, it will get eaten alive by Stealth Rock, especially dire if Talonflame is your opponents only Defogger, though watch out for Flame Body variants that can punish the knock off. Zeraora and Regieleki are other noticeable checks, resisting Gale Wings Brave Bird, natively outspeeding Talonflame and crushing it with their STAB electric moves. Psychic Terrain setters work well in stopping Gale Wings assaults as they null out priority (including Gale Wings Defog) though none naturally outspeed Talonflame and even an unboosted Brave Bird/Flare Blitz will sting. Priority is an answer when Gale Wings is not a factor, able to seriously wound it if not KO it if Talonflame has taken prior damage

Overall, Talonflame still has the potential for greatness. However, its frailty, compounded by its love of recoil moves means that Talonflame offers almost no defensive synergy to a team. Furthermore, its one selling point, Gale Wings requires high maintenance, including opportunities that your opponent may not provide. Overall it can difficult to justify Talonflame over another Flying type that can perform similar duties.
Last edited: Feb 3, 2021
I was once routed by a Gengar who critted 4 times in a row on my team. Morale of the story; Crits happen and Sucker Punch is good Gengar repellent.

Just a quick mention to a few moves that may be worth a mention.
Dual Wingbeat: Another Flying type STAB. Weaker, but it doesn't have recoil and can break Substitutes.
Acrobatics: If you can manage a set that consumes your held item, it has nearly as much power as Brave Bird only without the recoil.
U-Turn: Allows you to damage and swap out against undesirable threats (So, Rock types basically).
Steel Wing: Your best offensive option against Rock types.