Staff member
Admin
Time for the next Pokémon of the Week and this week we are going to Hoenn! 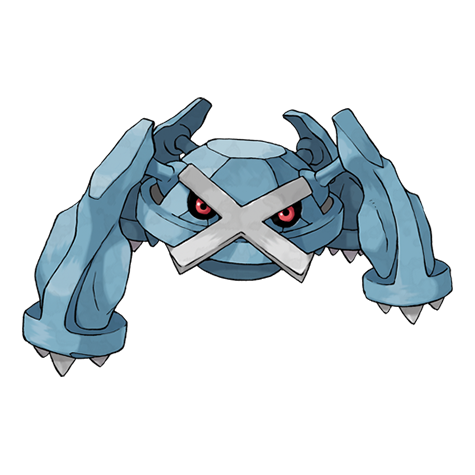 What, you're gonna ignore the other legendary birds?

Pokemon Power said:
What, you're gonna ignore the other legendary birds?
Click to expand...

I would have said the same exact thing, but you beat me to it.
Leader of the Totodile Army

Metagross, Steven Stone's Ace and the one of two (thanks KyogreThunder) non-Dragon Pseudo Legendaries. Despite such lofty accolades, Metagross' tale is one of woe. Each and every generation since Gen IV, Metagross gets nerfed while everything around it gets stronger. The Explosion Nerf in Gen V removed a powerful out from Metagross' arsenal while Scald was introduced exasperating Metagross' Bulky Water woes. Gen VI removing Steel's resistance to Dark and Ghost meant that Metagross had its weaknesses doubled from 2 to 4, and Knock Off's new increase in power meant that Dark was everywhere. Gen VII introduced Z-Moves, which Metagross had difficulty using but gave everything else a one time nuke to blow Metagross away before it could do anything. Gen VIII removed its best trapping option in Pursuit and its Mega Evolution.

Yet still, Metagross persists. While its weaknesses are common, its resists are numerous, and with Clefable, the Tapus and many other fairies being as popular as ever, there is no lack of targets for its famed Meteor Mash. Metagross' Defense ensures that it is not easy to OHKO, even when striking its weaknesses. Dynamax doubles Metagross' good HP to staggering new heights and gives it many more setup options. While Metagross has its flaws, it is a Pokémon to be respected and will run roughshod over a team given a chance.

A Metagross set designed to abuse Dynamax. Max Steelspike and Max Quake are great on Metagross, boosting its defenses to even greater heights, while Weakness Policy gives Metagross a one time setup from a tanked super effective hit. Meteor Mash, while inaccurate has a chance for an ATK buff, making Metagross even harder to wall on top of its immense power. Earthquake provides wide coverage, hitting many Pokémon (Toxapex, Excadrill, Tapu Koko, and Regieleki) for massive damage. Ice Punch hits Landorus-Therian and the many Dragon types (Dragonite, Garchomp, etc.) for damage that can even surpass Meteor Mash. Last move slot is up to choice. Agility pairs well with Weakness, enabling Metagross to pull off a late game sweep. Thunder Punch hits the many bulky Water types along with Skarmory and Celesteela was considerable damage, while Bullet Punch gives Metagross some badly needed priority.

EVs and Nature are dependent on your fourth moveslot. If you are running Agility, you want Jolly and significant speed investment to make sure you outspeed everything in the game after the Agility. Otherwise, maximizing Metagross' bulk is a great way to get consistent use throughout the game and makes Metagross nigh unbreakable after a Dynamax.

Checks and Counters
Bulky Waters can tank everything an unboosted Metagross throws at them, burn it with Scald and do considerable damage on top of it considering Metagross' lower SDEF.

Zapdos fears nothing except Ice Punch, can easily Roost the damage off and fry Metagross with STAB Electric moves/Heat Wave

Hippowdon is in a similar boat, replacing the STAB electric moves with STAB Earthquake.

Skarmory doesn't do much damage to Metagross, but can wall unboosted Metagross and setup all day.

At the end of the day, Metagross is extremely vulnerable to being worn down. It has no reliable recovery outside of Leftovers and RestTalk and is exposed to every entry hazard except Toxic Spikes and Sticky Web. Sure, it resists Stealth Rock and Steelsurge, but with no recovery and Metagross' relatively low speed means that even that small bit of chip damage adds up quickly.
Last edited: Mar 7, 2021
I was once routed by a Gengar who critted 4 times in a row on my team. Morale of the story; Crits happen and Sucker Punch is good Gengar repellent.

What I don't understand is the process of how the Serebii.net staff select their Pokemon of the Week.

Mestorn said:
the only non-Dragon Pseudo Legendary.
Click to expand...

Pokemon Power said:
What I don't understand is the process of how the Serebii.net staff select their Pokemon of the Week.
Click to expand...

The selection process is completely random. One week, it could be something as useless as Wobbuffet or something as useful as Gengar the very next week.
Leader of the Totodile Army

Pokemon Power said:
What I don't understand is the process of how the Serebii.net staff select their Pokemon of the Week.
Click to expand...

The way I see it, Salamence and Metagross were intended to counter each other with neither of them having an obvious advantage over each other.
Leader of the Totodile Army
L

The way I see it, Salamence and Metagross were intended to counter each other with neither of them having an obvious advantage over each other.
Click to expand...

It was probably to expand on the Competitive aspect of the game (since it was from 3rd Gen onward that the Pokemon games became more of a competitive game). With just Dragonite & Tyranitar, as Pseudo-legends available prior to it, the balance wasn't really that good.

There is a possibility that, they wanted Tyranitar & Metagross to cancel each other out (as the only 2 non-Dragon Pseudo's), or Metagross having advantage over Tyranitar (i mean, Metagross until Gen 5 took ½× damage from Rock type and 1x damage from Dark type moves, while Tyranitar took 2x damage from Steel Type, and had immunity from Psychic; but both of them had access to other type moves which were commonly used and effective against each other, like Metagross with Brick Break or Tyranitar with Earthquake).
Last edited: Mar 8, 2021