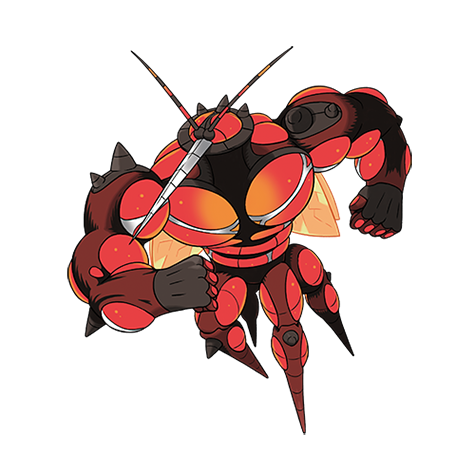 Good Coverage Moves:
For Bug STAB, use Lunge or Leech Life. The latter is better for a more bulky set, giving some survivability. Fell Stinger is a gimmick and you don’t want to rely on “almost” killing your opponent.

Ultra Beasts are an interesting series of Pokemon. Some are beautiful like Nihilego and Pheromosa. Some are creepy like Zurkitree and Guzzlord. Some look pretty freaking cool like Kartana, Celesteela, and Naganadel. Buzzwole on the other hand can be summed up in one phrase:
I'M SEXY AND I KNOW IT

Set Details:
A set up tank that recovers damage as it inflicts it. Bulk Up increases power output and bulk whilst making it easier to sweep and accrue attack boosts with Beast Boost, while Leech Life inflicts reliable damage and heals back some to keep Buzzwole in the game. Drain Punch also helps in this regard providing a secondary STAB that heals as it hits, but Close Combat will give you that extra oomf against sturdier targets at the cost of defenses. The last slot is up to what you fear most since 3 attacking moves won't hit everything for neutral damage. Darkest Lariat has the widest coverage and bypasses opponent defense boosts, Iron Head keeps Fairy types at bay, Stone Edge surprises Flying types that think they are safe against both STAB, and Ice Punch is there to handle the miscellaneous Dragon types. Pump EVs into HP and attack to make Buzzwole as tanky as possible, and your item choice is a matter of preference. Leftovers is consistent recovery, Life Orb increases power output and synergizes with the HP drain from Leech Life and Drain Punch, as does Big Root if you want to amp up your offensive recovery rate.

Set Details:
Pretty sure every regular mosquito also hold Choice Scarves with how impossible they are to hit...Anyways, as above, so below. Same principle as the tank set only with max speed and attack investment along with a Choice Scarf. Pick an attack, knock out the opponent, and see if you can steam roll the opposition with each Beast Boost attack bonus.

If you have any other questions as to why you should put Buzzwole on your team, let me answer your question with another question...
WANNA SEE ME DRINK THIS GUY!?

Buzzwole immediately draws comparisons to Heracross, being a massive physical threat with the same typing. The key point of difference between the two stat wise is that Heracross has much better SDEF than DEF (and Buzzwole having a lot more HP...). Overall, I say Buzzwole got the better end of the deal here. Bug/Fighting has some valuable resistances in Grass, Ground, Dark and Fighting. All of these types are predominantly Physical, so Buzzwole sees a lot of mileage out of its resistances. Shame that its weaknesses are all common and predominantly Special based (bar Flying which Buzzwole is not going to want to take regardless).

So I wear a vest instead. Jokes aside, Buzzwole has quite a bit of staying power with Assault Vest on, able to take a myriad of hits on both sides of the spectrum and able to heal up with its STAB Leech Life and Drain Punch.

Assault Vest and serious investment gives Buzzwole rather respectable special bulk, enabling it to take a hit it otherwise couldn't have and strike back for the KO with the appropriate move. Ice Punch hits the many Flying types that would love to switch in on Buzzwole alongside the Myriad of Dragons. Iron Head dispatches fairies, Darkest Lariat hits Ghosts and Earthquake deals with many Electric and Fire types.
Speed investment is recommended so that Buzzwole isn't outsped by as many targets. Adamant Nature is to give Buzzwole more oomph in its attacks (and thus more healing from Leech Life and Drain Punch).

Fun Fact: If two stats are the same Beast Boost will prioritize stats in this Order: Attack > Defense > Special Attack > Special Defense > Speed. So if you don't invest in Attack or Defense at all and have a neutral nature for both, Beast Boost will always prioritize Attack on Buzzwole.
I was once routed by a Gengar who critted 4 times in a row on my team. Morale of the story; Crits happen and Sucker Punch is good Gengar repellent.