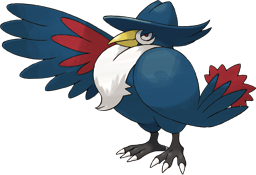 Honchkrow is an interesting Pokémon. Respectable offenses and HP, but poor Speed and Defenses leave a muddled picture of its desired role... okay, that's a lie. One thing that Honchkrow's stats scream is to spam powerful Brave Birds using that delicious base HP to suck up the recoil. Honchkrow is also a best selects of the dark type, having all of their best non-Darkrai moves and able to use them to great effect for mind games.

Gimmick set. Use Taunt on anything and force it into a catch-22: Does it attack and eat a STAB Sucker Punch? Or does it run and eat a STAB Pursuit? Requires excellent prediction and maybe a bit of mind reading. Brave Bird is so that Fighting and Fairy types don't walk all over you. Moxie has you steamroll and put more pressure on your opponent during the catch-22. Item is to either buff up your catch-22 for free or get a one time nuke for the more bulky targets that don't mind your STAB Pursuit or Sucker Punch.

...attacks from a distance. Shame that Honchkrow does not get Air Slash... However that decent SATK becomes painful after a Nasty Plot and subverts the common Honchkrow sets for a surprise factor. Dark Pulse is your STAB move of choice. Heat Wave and Psychic are coverage moves covering a wide variety of Pokémon. Psychic in particular gets important Fighting targets along with some of the bulkier Poison types like Tentacruel. Heat Wave gets Escalvier, Forretress, and Rhibombee hard.

Other Options
-Haze -Stat boosts? What Stat boosts? Unfortunately most Honchkrow varients like setting up, so this can hurt as much as it can help.
-Tailwind -Patch up Honchkrow's shoddy speed stat, as well as that of its teammates.
-Snatch -Steal your opponents boosts
-Mirror Move+Flynium Z -+2 Attack plus the Z-Move of whatever your opponent used last. Requires good prediction. The Flynium Z also syncs well with Brave Bird
I was once routed by a Gengar who critted 4 times in a row on my team. Morale of the story; Crits happen and Sucker Punch is good Gengar repellent.

Forget Honchrow, Murkrow is where it’s at! As one of the few Prankster Pokémon who is also a Dark type, it can’t be Taunted by other Prankster Pokémon like Whimsicott. And with the introduction of Gen2 virtual console, a terrifying set becomes available.

I ran this in an all-Status team, and it was dangerous in the Legendary Battle Spot Doubles, only losing once in over 20 battles. After one Shuckle Guard Split, it gets a little more tanky than Snorlax. Curse and Calm Mind increase your defenses further, while your offenses go up and your unimportant Speed (Prankster!) drops. Roost or Rest is for recovery.
Mirror Move is a priority (Prankster!) attack that returns what your opponent used back at them, and both Curse and Calm Mind will boost their damage. But Dark types are guaranteed to be immune, and the opponent may wise up and only use attack’s they are immune to, such as (random example) a Gastrodon with Scald and Storm Drain.
If you fear any non-Prankster Pokémon using Taunt, or opposing Dark types, Payback is another option. With the low speed, it’s guaranteed to move second for doubled damage on top of STAB.

A Doubles supportive set. Tailwind/T-Wave are easy speed control; one temporarily raises speed for your side, the other lowers 1 target permanently with a chance of inaction. Icy Wind is if you fear Taunt, don’t mind Prankster’s priority, or want to break a Sash.
Feather Dance and Snarl lower the offensive threat of opponents.
If you want to finish off opponents quickly, Sucker Punch is priority. For sustain, Roost will heal.
Since this set focuses on lowering offensive pressure, DO NOT RUN Foul Play! And since Swagger was nerfed to have lower confusion rate, I wouldn’t recommend using it against opponents when combo’d with Foul Play.
Other moves can be Spite, Snatch, or Screech. Spite ruins Pokémon who use low-PP moves. Snatch prevents opposing self-buffing moves like Synthesis or Cosmic Power, and steals them for its own use. Screech can be used next to a physical ally to demolish a single target.
Last edited: May 21, 2018

I figured i should give this mixed Honchkrow set a try. Heat Wave will do well as coverage. Foul Play abuses opponents's stat boosts. Drill Peck is a solid STAB move. For now i run a Flyinium Z - Sky Attack combination, but when the time comes i can go back to using Psychic.
L

With a Scope Lens and Super Luck, all moves have a 50% chance of a Crit; 100% if it’s Night Slash or Air Cutter (Transfer Gen4). Meaning any Attack-lowering or Defense-raising Abilities/moves the opponent has are null and void. Intimidate Lando-T? Cotton Guard M-Ampharos? Hit like they did nothing!

Night Slash will always Crit. Roost is sustain, especially if you run Brave Bird. Drill Peck is also an option should you dislike recoil. Icy Wind may seem weird, but can be useful in Doubles and allow you to outspeed for a safer Roost (and thematically, Raven can wield Ice).
As for additional moves...Since Crits ignore attack drops, Superpower is okay coverage 50% of the time. Sky Attack will always Crit, but needs charging. Air Cutter is Special, but will always Crit.
Last edited: May 21, 2018
D

For the positives and negatives section (my favourite section):