Staff member
Admin
Time for the next Pokémon of the Week and this week we go to Hoenn! 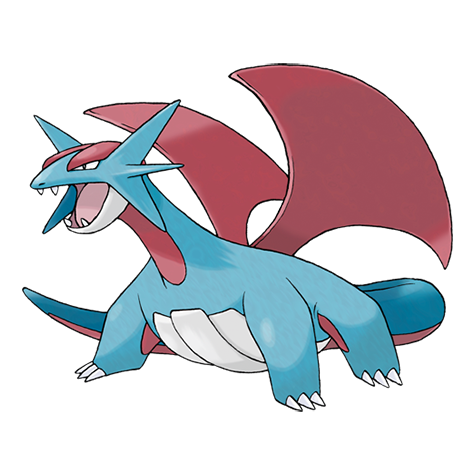 Oh no I lost my mega stone whatever shall I do against the likes of Dragapult, the Tapus and many more.

Before I begin my reign of terror I need an ancient exercise. Doing this let's me outpace many of the competitors that may strike first due to their speed while giving me added strength. Raging like a Karen is the only stab I have against the other dragons, but it hits harder than listening to Gen 5 music. For the boys in armor I shake the earth making sure they don't wall me. Worst of all are the fairy tale creatures that not only hit hard, but are immune to my dragon attacks. So what do I need to do handle this situation? Slap my tail made of iron of course. I can power up my attacks in return for health thanks to my life orb.

Buddies:
Tapu Fini is a pretty chill gal. She takes an ice beam like a champ. Her perfumes are so strong they strengthen fairy type attacks and reduce the damage from dragons like me so keep that in mind.

Tapu Lele: If Fini ain't ya girl then Lele is a good alternative. Her perfumes allow those with priority to be stopped dead in their tracks.

Ferrothorn is a sturdy boi that needs no introduction. He can lay down booby traps that help cripple the army to bits least they have a spinner.
Last edited: Jun 6, 2021

Cynical me again, but I was really hyped to use Steam Engine Golurk.. sad to see the concept shot down so soon in the topic.

"Golurk finds itself shoehorned into a defensive role in Singles, with Steam Engine and Weakness Policy being too unreliable as not every team carries a Water move and the general difficulty of surviving a Water attack in the first place. However, even at this role, Golurk struggles."

Who knew..
Answer to all the bad things in the world: Give up on trying to make everything better. Hence, accepting it for what it is. YOLO! <- Click the link and daw.. -.-

Oh how the mighty have fallen. For generations 3-5, Salamence was the king of Dragon Dance and just a threatening sweeper that every had to look out for. Then XY came out with the Fairy type, and suddenly Salamence couldn't spam outrage any more. So what does Gamefreak do? Release an utterly bonkers Mega Evolution that terrorized the metagame and could even hold its own against the biggest monsters in Pokémon. However, with the removal of Mega Stones, Salamence has had to fight on its own merit. Unfortunately, the environment has gotten even more hostile to Salamence in the intervening generation with stiff competition in all its roles.

However, note that even Salamence's lowest low is still terrifying high. Two excellent abilities in Moxie and Intimidate means that Salamence can either naturally snowball as it racks up KOs (especially with Max Airstream) or regularly pivot in and provide team support. Sitting at Base 100 Speed means that Salamence does get the jump on slower Dragons like Dragonite and Hydreigon and having workable Special Attack makes Salamence difficult to wall as it can viably run both Special and Physical sets. A new viable physical STAB in Dual Wingbeat is a welcome boon to physical sets, as is Hurricane to special sets.

A support Mence in Doubles. Use Bulldoze on your opposing team to slow them down, while either dodging with a partner, or triggering your Ground weak partner's Weakness Policy (Rhyperior, Tyranitar, Metagross for example). Intimidate drops your opponent's attack while Assault Vest makes Salamence annoyingly durable on the Special Side, ensuring Salamence sticks around. Air Slash is reliable flying STAB that can nab a flinch, While Draco Meteor makes for a good one time nuke. Or if the drawback of Draco Meteor is too big, stick with Dragon Pulse for Dragon STAB. Heat Wave is a spread move that melts opposing Steel types.
I was once routed by a Gengar who critted 4 times in a row on my team. Morale of the story; Crits happen and Sucker Punch is good Gengar repellent.

Fun Fact about Salamence:
It is the same height as Dunsparce. 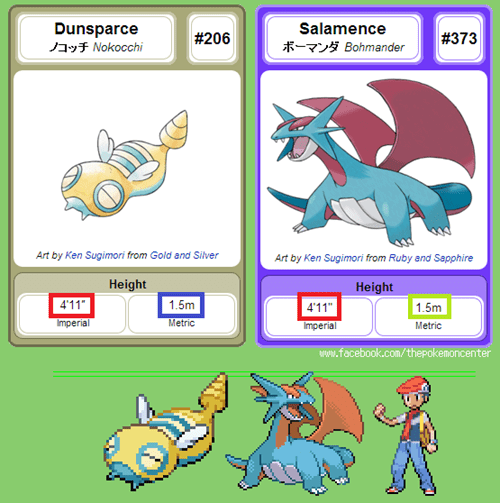 Guys, I love you, but this week’s mistake is just goofy:
“Golurk finds itself shoehorned into a defensive role in Singles, with Steam Engine and Weakness Policy being too unreliable as not every team carries a Water move and the general difficulty of surviving a Water attack in the first place.”
~FYI, Golurk can’t get Steam Engine. This is a good laugh for a really bad copypasta. Reminds me of two years ago with the “Torkoal with Shadow Sneak and Technician.”

Also, for Salamence, I have some additional options:
Wish passing ‘mence has always been an odd but surprisingly reliable choice. While on Salamence it might be easier to Roost your health back, Wish has great synergy with Intimidate to force switches. Another fun fact- now that Crown tundra brought in the Ability patch, you can now use Wish with Moxie, sorta like a wrecking ball that can heal a teammate when it has nothing left to do. Like a discount Mega Lopunny Healing Wish set.
Defog is nice, but there are better defoggers.
Breaking Swipe- this may seem like a good strat, especially in VGC where Intimidating opponents can hinder them well enough, and you don’t need to switch, plus Intimidate was nerfed against certain abilities, so it seems great. The catch? The same problems that intimidate can cause, such as Adrenaline Orb + Defiant/Competitive are still there. The fact that doesn’t work on Fairies like Azumarill, the Tapu(s), or Zacian. Also, because Dynamaxing is allowed in VGC, all dragon moves drop attack of both opponents, regardless of who it hits. Salamence is better off using other doubles options like Rockslide.
The craziest battle I ever had- Toxic spikes supported baton passing team, with a Splashing Wailord. And won. You have to try it!

Ah, Salamence. A terrifying Pokémon capable of nothing but sheer destruction. In the past, such as in Generations IV and V it would fire off a Dragon Dance or two before causing havoc with Outrage. Then in Generation VI the fairy type was introduced greatly reducing its capabilities. But later in the generation it was gifted with a mega evolution and an amazing ability to boot. But all good things must end and mega evolutions we’re removed in Generation VIII which made Salamence just another dragon/flying type in world full of fairies and Pokémon capable OHKO-ing it with a solid Ice Beam. How the mighty have fallen. However, Salamence is still a solid choice with the right team. It’s hard to fit in a meta game that also features Dragapult, Dragonite, Dracovish, among other capable dragon sweepers.

Since Salamence is viewed mostly as a sweeper it is easy to forget that it can also carve out niche roles defensively. It can be a great Defog user (both offensively and defensively). It can also be used as Wish support (from an obscure Bagon event from RSE).

In Generation VIII, I have had the most success using it as part of an offensive stall team providing support to my other stallers and sweepers. And since others provided their sweeper sets I’ll share my defensive set.

With this set I am able to keep Stealth Rocks off the field with Defog while not having to worry about them hurting me with the boots. Toxic provides additional stall support (one of 3 Toxic users on my team) and Roost provides valuable healing. Dual Wingbeat is there so I do not become Taunt bait.

This is nowhere near the best set of Salamence and is a clear niche role that it provides for me but it just shows where it has fallen given the removal of megas.