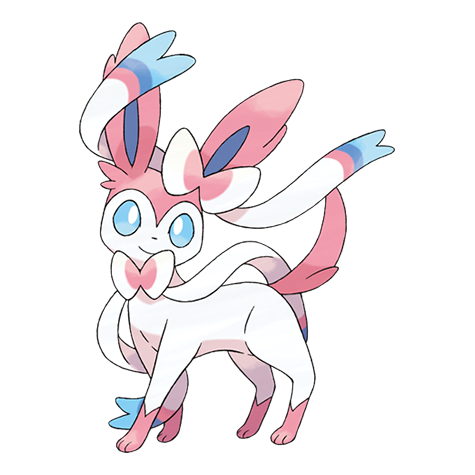 Anyone else remember the collective s***storm when back at the start of gen 6 this new Eevee evolution was revealed to be a totally new type that was immune to Dragon attacks? It was a great day for competitive players, and hell on earth for hardcore Scrafty and Hydreigon players. 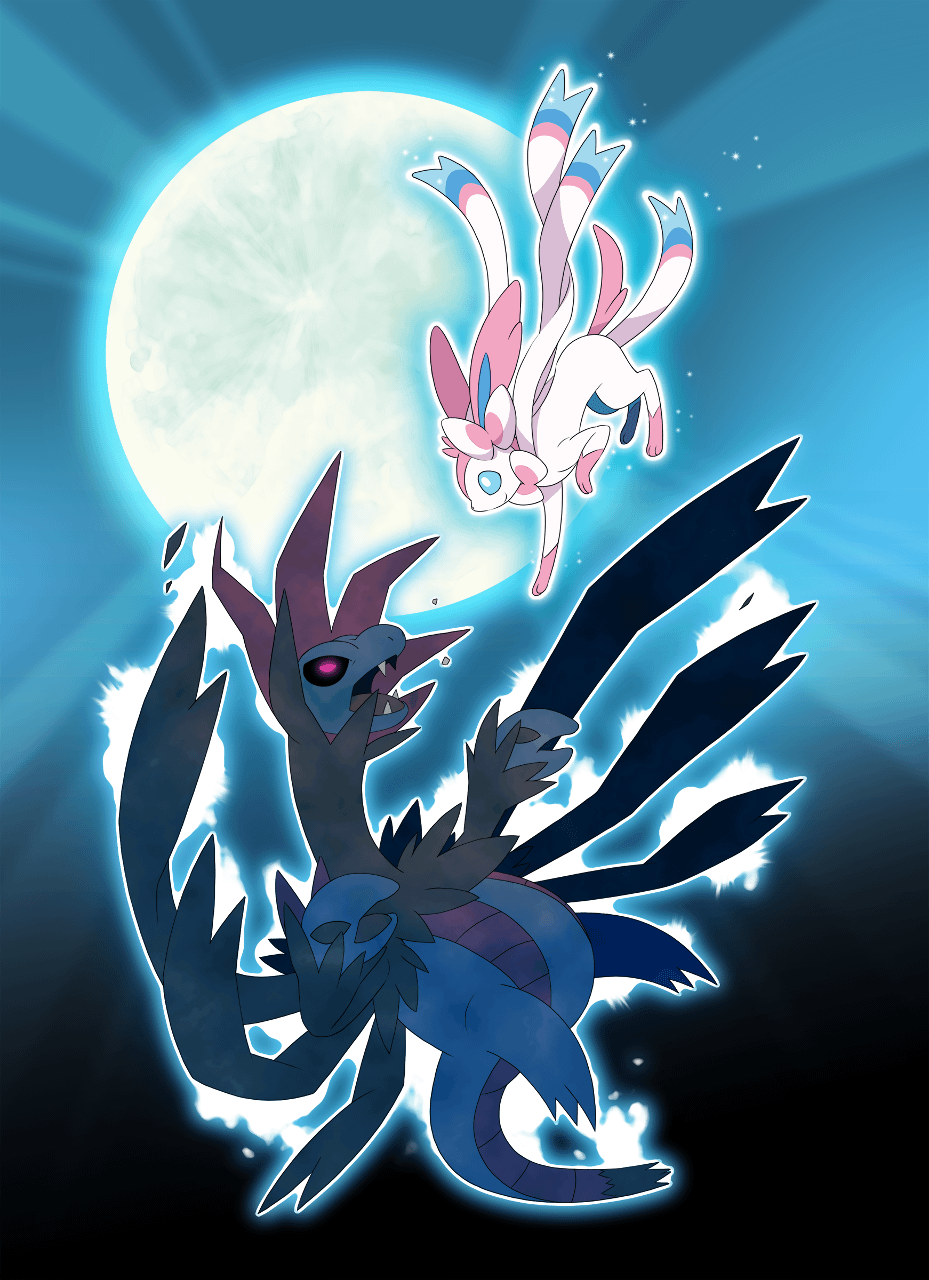 Every even numbered generation (Sans this one for some reason) we have gotten a new Eeveelution, providing more opportunities to create a pure Eevee team that can serve a variety of roles. Jolteon, Espeon, and Leafeon function as sweepers. Vaporeon and Umbreon are the defensive ones, and Flareon and Glaceon are...underused no thanks to low speed and poor typing/defenses. Where does Sylveon fall under this spectrum? Honestly, Sylveon went a different direction opting to function more as a tank/cleric for your team. It's pretty bulky, has good special attack, and is blessed with pure Fairy typing that makes it an excellent choice both offensively and defensively. However Sylveon doesn't really have quite enough to make it into the highest tier no thanks to poor speed and 4 slot move syndrome which keeps it from running everything it needs to handle any threat thrown its way. But its still incredibly useful and adorable to have on your team.

Set Details:
A set up tank set that capitalizes on Sylveon's bulk and power. Use Calm Mind to boost your special attack and special defense allowing you to hit harder and tank special hits better, use Wish to recover health and supplement it with Protect to burn the turn needed all while scouting and netting extra recovery with Leftovers, and Hyper Voice is your sole attacking move since it becomes a boosted Fairy attack with Pixilate and offers a means to get around Light Screen and Substitute. Invest everything into HP and physical defense since Sylveon already has naturally high special defense that will only get boosted higher with Calm Mind.

Set Details:
Another tank set, but this one trades in the recovery options for wider offensive coverage and higher damage output. Once again Calm Mind boost your special attack to make your moves hit harder and bulk up your special defense, Hyper Voice remains Sylveon's best STAB option with its Pixilate damage boost and sound-based bypassing of Light Screen and Substitute, however you can opt to replace it with Draining Kiss if you need that extra recovery and don't mind halving your STAB's power and trading in Pixilate for Cute Charm. This time however we also have options to handle the types that can take a Fairy attack. Psyshock counters any Poison types that make them think they have the advantage, and to a lesser extent Fire types that also resist Fairy attacks. And finally we have gen 8's gift to Sylveon in the form of Mystical Fire that gives it a means to counter Steel types which it had always had problems dealing with in the past. Leftovers remains as your item since keeping Sylveon in the battle as long as possible is key, though this time you can divert your nature and EVs to HP and special attack instead to maximize your bulk and power.

While maybe not the best Eeveelution, it was still Sylveon and all its adorable ribbony glory that ushered in generation 6 as well as the Fairy type as a whole...not to mention a fair share of weird fanart depicting a biziarre relationship between Sylveon and the now dethroned Hydreigon: 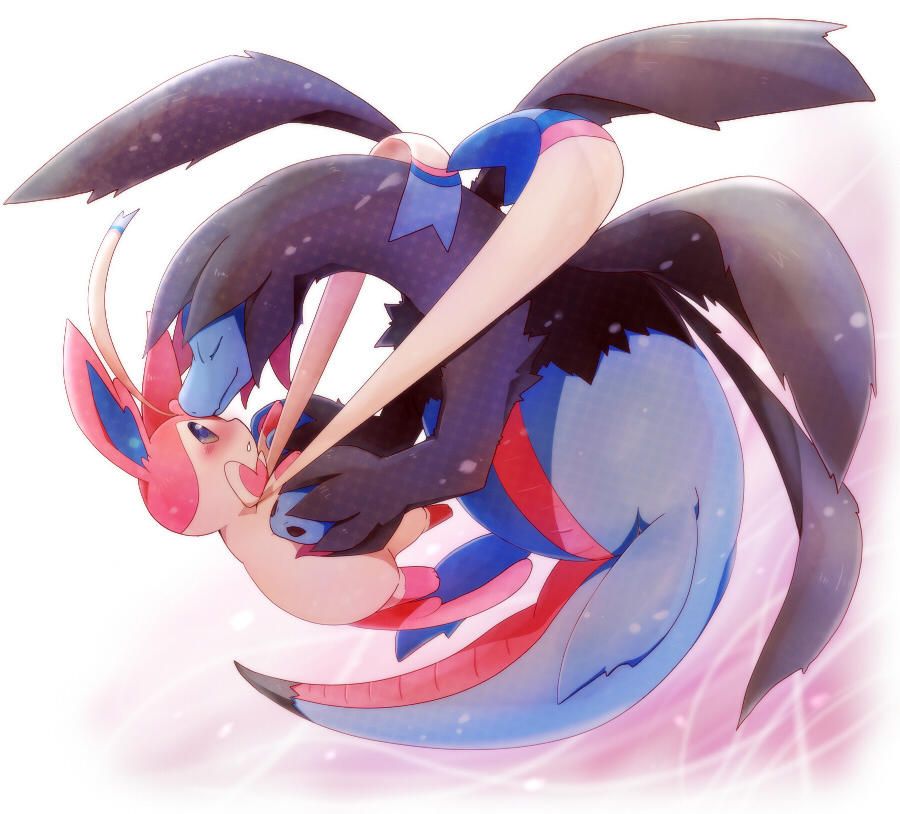 The sheer level of shipping was absolutely ridiculous I tell you:

"But Sylveon and Hydreigon aren't in the same Egg Group!"
"Fool! Love transcends the boundaries of Egg Groups!"

Joking aside, the generational shift was rough for Sylveon. Not that it had its tools removed. I mean Heal Bell is now transfer only, but otherwise all of Sylveon's moves are still there and it even gained a valuable coverage option in Mystic Fire. What made the generational shift rough was the rise of the Steel type. Steel types have always been popular thanks to their wide array of defensive attributes, but this generation has been taking it to the next level. More Steel types have been seeing play than ever before, and even with its new Mystic Fire, Sylveon struggles against them. Additionally, Sylveon's flaws are more apparent in the face of stiff Fairy type competition at all levels. Clefable, Florges, Primarina, Comfey, Hatterene and Gardevoir all fill a similar niche to Sylveon and often have a trait that makes them better than Sylveon at it.

Sylveon still holds its own. Thanks to the loss of Mega Evolution, Sylveon is one of two Pokémon that still has one of the powerful -ate abilities which it puts to great use with Hyper Voice doing obscene damage even uninvested. Its special movepool is tied with Espeon for having the widest coverage of all the Eeveelutions and like Umbreon and Vaporeon, it shares the same clerical abilities.

Dynamax
Sylveon doesn't make the greatest Dynamax sweeper. While the above average HP equates to a massive bulk boost, Sylveon's moves lack synergy. Pixalate Hyper Voice and Psyshock both setup terrains, Shadow Ball does nothing to support Sylveon and Mystic Fire setting up Sun only improves Sylveon's Fire moves. Sylveon can't ramp up and only use the increased bulk and power to be better a sweeper, but that is about it.

Preferred Partners
Like any Fairy type, Sylveon likes Ground type partners that easily dispatch the Steel, Fire and Poison types that trouble it while having high Defense to compliment Sylveon's Special Defense. Gastrodon, Quagsire, Mudsdale and Rhyperior make good examples of this, the former two punishing physical sweepers with Scald while the latter two enjoys Sylveon's clerical abilities and can easily take care of sponges that stymie Sylveon's offense.
Staple defensive walls without recovery always enjoy Wish and Heal Bell support to keep them healthy throughout a match. Bronzong, Muddsdale, Stakataka and Registeel all love the cleric support and Sylveon's ability to check Dark (Bronzong), special (Muddsdale), and Fighting (Stakataka/Registeel) moves while being able to pivot into Sylveon's own weaknesses for a rather solid defensive core.
I was once routed by a Gengar who critted 4 times in a row on my team. Morale of the story; Crits happen and Sucker Punch is good Gengar repellent.

Yeah not much to say here. With its Hidden Ability, there is no reason to run Fairy STAB when Pixilate-boosted Hyper Voice is strictly better.
Really the only other possible option is running a Baton Pass set, along with Stored Power over Psyshock to take advantage of the starched boosts (though this may be illegal depending upon the format)
S

I think that your moveset is pretty interesting in that it lulls players who know Sylveon's Defense stat is terrible into a false sense of security. Do you think that Cute Charm would be better as Sylveon's Ability for this set as it further restricts the capabilities of physical attackers (assuming that Hyper Voice is replaced with an actual Fairy-type move to compensate for the loss of Pixilate)?

Starspinner said:
I think that your moveset is pretty interesting in that it lulls players who know Sylveon's Defense stat is terrible into a false sense of security. Do you think that Cute Charm would be better as Sylveon's Ability for this set as it further restricts the capabilities of physical attackers (assuming that Hyper Voice is replaced with an actual Fairy-type move to compensate for the loss of Pixilate)?
Click to expand...

I feel Cute Charm is far too unreliable. There are Physical moves that don't make contact (Earthquake, Rock Slide, Gunk Shot, etc.), and Attract is a very weak status. Yes it still has the 50% of not attacking unlike Confusion, but it is easily blanked by same gendered Pokémon and pokémon that don't have a gender. And you or your opponent switching out will end Attract as well (which, since this is a Wish set, is pretty likely that Sylveon is going to switch out)

Admittedly, Pixelate is only a slight advantage. The only benefits you get are a stronger STAB move to make up for the fact you are uninvested and the ability to bypass Substitute with Hyper Voice. The stronger STAB move tends to be more reliable and makes Sylveon less passive. Pokémon is often a game of inches, and every little bit helps. To compare damage:

BillyBobJoe said:
Yeah not much to say here. With its Hidden Ability, there is no reason to run Fairy STAB when Pixilate-boosted Hyper Voice is strictly better.
Really the only other possible option is running a Baton Pass set, along with Stored Power over Psyshock to take advantage of the starched boosts (though this may be illegal depending upon the format)
Click to expand...