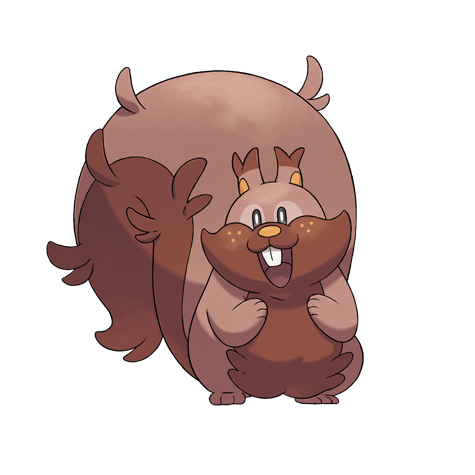 The starter rodent. Historically it's always been a great HM slave as well as usually not being useful in the competitive scene. But with HMs having been killed it seems they can't even serve that role anymore. And sadly Greedent also fits the bill as useless in the competitive scene, which is a real shame since unlike other starter rodents before it, Greedent actually had a lot of potential. High HP coupled with good defensive stats, abilities that synergizes well with recovery berries, a wide offensive movepool, even a few useful stat boosting options. What stops Greedent from succeeding in the competitive scene is that it lacks one or two moves that could have made Greedent a true threat. No Curse to run a tank set, no recovery moves or even Recycle since it would have paired well with Cheek Pouch or Gluttony, and no Trick Room to bypass that non-existent speed. Gamefreak seemed to go out of its way to give this rejected Disney woodland character some viability, but then tripped on the last hurdle.

Set Details:
This set requires a teammate to use Trick Room, but when this set works it is devastating and humiliating to be on the receiving end. Coming in on Trick Room, proceed to set up Belly Drum and then heal off all HP lost automatically thanks to the combination of Sitrus Berry and Stuff Cheeks. With your attack maxed out and your abysmal speed now becoming an asset, proceed to sweep with Body Slam, counter Rock and Steel types with Earthquake, and Fire Fang is your nasty surprise to the Bug/Steels as well as Ferrothorn. Dynamaxing also helps this set since it grants Greedent the extra power and bulk it needs to plow through opposing teams. Invest everything into HP and physical attack, and make sure to use the proper nature and IVs to drop your speed as far as possible to benefit from Trick Room.
Last edited: Aug 21, 2022

Ah, the early game normal type. Normally only good for the early game, they evolve fast, and have the base stat total you'd expect. Good utility with HMs, but otherwise underwhelming. However, Gamefreak has been changing gears. Trying to make every Pokémon have a niche. And that is no where more apparent than with Greedent. Turning what would be a normally lackluster early game Pokémon into a fearsome Trick Room sweeper thanks to Belly Drum.

However, even with that design philosophy in mind, Greedent still falls short. Trick Room and Belly Drum individually are inconsistent strategies in Singles, the short timer for the former and the inherent risks of cutting your HP into half for the latter make both easy to disrupt. Putting the two strategies together? You have 3 turns to make an impact. All the setup and jumping through hoops for 3 turns of pure offense. In previous generations, this might have had merit, but with the loss of Return, Greedent's best STABs are Body Slam and Giga Impact if Dynamaxing. Luckily the Dynamax timer matches up with Greedent's ideal 3 turns of Trick Room, and Greedent's great HP makes it immensely bulky when Dynamaxed. However, getting to that point without using your Dynamax can be even more difficult. And outside of Dynamax? Giga Impact would be a death sentence while Body Slam's lack of power is all too apparent.

Greedent has some incredibly high highs, but its cripplingly poor Speed outside of Trick Room and only decent defenses with no recovery (since the Sitrus + Cheek Pouch would Ideally be used to recover from Belly Drum), vulnerability to both Status and Priority, and the work needed to get to those highs leave Greedent a gimmick. Which is still miles better than the competitive viability of Raticate, Furret and Bibarel.
I was once routed by a Gengar who critted 4 times in a row on my team. Morale of the story; Crits happen and Sucker Punch is good Gengar repellent.