Staff member
Admin
Time for the nextP okémon and we are going to Galar! 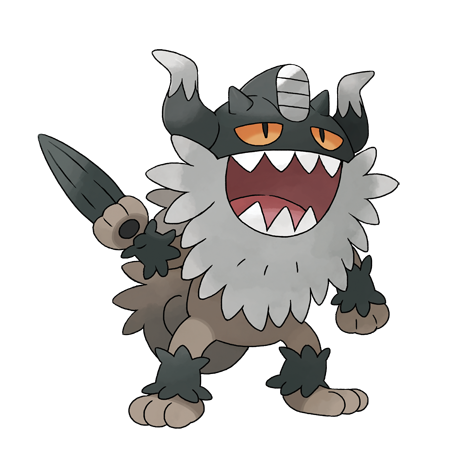 Set Details:
Boost offense with Swords Dance, spam your Iron Head STAB which takes advantage of your psuedo Adaptability ability Steely Spirit, Close Combat offers the best coverage/power and a means to counter Steel types, and your last move is up to you as Crunch has perfect neutral coverage against all other types alongside Steel and Fighting, but Seed Bomb counters Water types that can wall Iron Head. Life Orb gives you further damage, and invest everything into attack and speed. You can also opt to replace Steely Spirit with Tough Claws if you would prefer a x1.3 boost to all direct attacks instead of a x1.5 boost to just Iron Head.

Perrserker struggles to find any niche in more inclusive Singles formats. Its bulk is awkward, with a passable physical defense undermined by underwhelming HP and terrible Sp. Def, and it's very slow. It does boast pretty good offensive presence with 110 base Attack, further bolstered by access to two solid offensive abilities in Tough Claws and Steely Spirit, but it struggles to use that offensive presence against many teams, and mono-Steel is not the best offensive typing.

In the lower tiers, it can be a pretty threatening offensive pivot and wallbreaker that is more resilient to chip damage than other Pokemon who usually fill that role. It's not a huge niche, and Perrserker's negative aspects still absolutely apply, but it's something.

Choice Band + Tough Claws gives Perrserker as much overall power as possible. Steely Spirit can be used for a stronger Iron Head specifically, but Tough Claws also boosts Close Combat and U-Turn, which makes up for the slight loss in power suffered by Iron Head. Max Speed might seem weird on a Pokemon with base 50 Speed, but its intended purpose is to outpace as many defensive Pokemon as possible. Iron Head is your main STAB; it's reliable, it's reasonably strong, and it packs a nice Flinch chance that can let you break through some threats in a pinch. Close Combat smacks opposing Steels which otherwise wall most of his movepool. U-Turn is used for pivotting, which this set does very well against bulky teams. Finally, the last slot can go to Seed Bomb, which hits bulky Waters like Quagsire hardest, Crunch, which does more damage against certain Ghost-type threats like Gourgeist and Palossand, or Double Edge, which is your strongest weapon against certain Fire-type opponents who might switch in like Charizard and Centiskorch, OHKOing both with a Tough Claws boost.

While Perrserker can go berserk against slower defensive teams, it's going to struggle to pull its weight a lot more against offensive teams. Partners who can cover this weakness are necessary for this set. This can include priority users like Absol and Lycanroc, as well as fast breakers like Ribombee, Hitmonlee, and Cinccino. Other pivots are great to get Perrserker in safely, such as Mesprit and, again, Cinccino.
​
Only when the last tree has been felled, the last fish caught, the last river poisoned, will we realize we cannot eat money.​
You must log in or register to reply here.
Share:
Facebook Twitter Reddit Pinterest Tumblr WhatsApp Email Share Link
Top