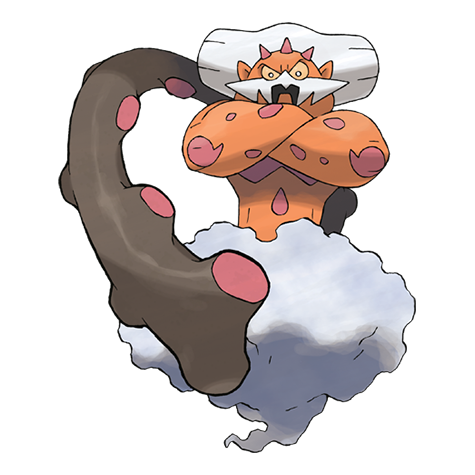 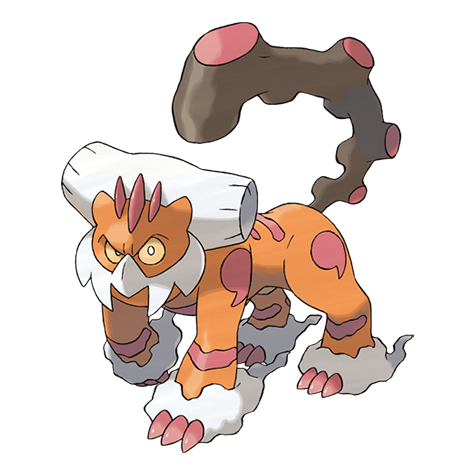 If you ask a lot of competitive players what the single best Pokemon in its given metagame is, a lot of them will answer Landorus-Therian. A staple of OU since its inception, it doesn't take a genius to see where Landorus's success comes from in either form. Both forms are blessed with fantastic Ground/Flying typing, good overall bulk, and great (and efficient) coverage. Its Therian form has Intimidate, one of the most useful utility abilities in the game, and a fantastic base 145 Attack stat. This combined with its naturally decent bulk, great typing, and access to many important support moves like U-Turn, Stealth Rock, and Knock Off, makes Landorus-T pretty much the premiere pivot for Singles, and allowed it to top the viability ranking charts for 3 and a half generations now.

Landorus-Incarnate takes a slightly different approach than its Therian form. With its somewhat lower offensive stats, you might, at a glance, expect it to pack less of a punch than Landorus-T. You'd be wrong. Sheer Force makes up for the slight difference in stats, turning Landorus-I into a frightening breaker that is incredibly difficult to switch into, and the fact that it still has a usable Attack stat backed up by moves like Knock Off and Superpower prevents dedicated Special walls like Chansey from switching in with impunity. It also crucially sits just above the base 100 Speed mark at 101, where Landorus-T sits slightly below it at 91. That 10 point difference might not seem like much, but there are a ton of Pokemon that sit between it that Landorus-I can outspeed while Landorus-T cannot.

Both Landorus forms are highly customizable Pokemon that can run a huge number of different sets, with many variations on those sets to deal with specific threats. This is especially true for Landorus-T in unofficial formats; the "standard" Landorus-T set shifts so often to keep up with the metagame (which in turn shifts around it) that trying to keep up with it means analyzing usage statistics for the high ladder and high-level tour games. It can sometimes be difficult to play around Landorus until you've identified its set; assuming that your opponent is using a defensive set as a bulky pivot can be disastrous if it turns out to be Scarf, for example, and unlike many other Pokemon there really isn't a safe assumption to make either way.

I'm not really a Doubles player, but with a strong Earthquake and Rock Slide and access to Intimidate, one of the best abilities in Doubles, I understand that Landorus-Therian made quite an impact in VGC as well.

As for what holds it back, Landorus famously lacks a reliable Flying STAB, having access only to Fly. This prevents it from leveraging its Flying typing offensively. It also lacks recovery, which can leave it prone to getting worn down if it's used to check multiple different Pokemon over the course of a match, and its bulk, while decent enough especially when bolstered by Intimidate, isn't amazing by any means, which forces it to rely on offensive pressure to deal with many Pokemon instead of just walling them indefinitely the way a bulkier defensive Pokemon might be able to do. Despite all of these flaws, Landorus is still one of the best Pokemon in the entire game.
Only when the last tree has been felled, the last fish caught, the last river poisoned, will we realize we cannot eat money.​

Landorus. What isn't there to say about it? Fantastic typing from both an offensive and defensive standpoint. Fantastic abilities in either form. Base 600 Stat total tweaked just so for either a balanced attacker (Incarnate) or physical power house (Therian). 90% usage in Gen 7 Smogon OU at one point, yet "not a problem". Landorus has been an all around fantastic pokémon, and the generational shift was kind to it. Landorus loves Max Airstream, giving it the Flying STAB it always wanted while bolster its lackluster speed.

Landorus-Therian has made quite the splash in Doubles as well. As the second best Intimidate user in the game, Landorus-Therian provides invaluable role compression, combining damage control [Intimidate + Max Quake], Speed control [Max Airstream], and just all around great damage [Rock Slide + STAB Earthquake having great coverage and spread]. Being immune to Electric moves is quite the boon as well, utterly stuffing the otherwise oppressive Regieleki and immune to both it and Thundurus' Electro-Web. Main thing holding it back is stiff competition with Incineroar (best Intimidate user in the game while sharing a Water weakness), Groudon (another Ground type so a bunch of shared weaknesses and benefits there), Thundurus (another Max Airstream user that punishes Intimidate).

Landorus Therian Doubles set. This is completely meant to abuse Dynamax, with STAB Max Airstream providing insane damage and speed control, Max Quake to bolster Special Defense after cutting down on the opposing sides Attack while not needing to worry about hitting your partner or getting its power further dropped by Rillaboom's Grassy Terrain and Max Rockfall providing extra chip damage. Out of Dynamax, Fly becomes a pseudo Protect, and while it can be easily blocked by Protect, it is good for Lando-T to stall out turns. Earthquake and Rock Slide spread damage around very quickly, and while both are blocked by Wide Guard, it is great for putting on the pressure. Swords Dance rounds out the set. Lando-T has no defense against opposing Intimidates, Parting Shots, etc. and thus helps address the issue while enabling Lando-T to stay in.
I was once routed by a Gengar who critted 4 times in a row on my team. Morale of the story; Crits happen and Sucker Punch is good Gengar repellent.

Landorus-I is a terror in formats where it is both allowed and doesn't have to compete with title legendaries like Groudon and co. Thanks to its expansive movepool and devastating power, Landorus-I has very few safe switch-ins. This set is a pretty simple wallbreaker / balance breaker that maximizes overall coverage and exploits Landorus-I's potential as an offensive pivot. Earth Power is your main STAB move and what you'll be using to do damage 90% of the time. Focus Blast nails Ferrothorn and is your best option against Corviknight, Celesteela, and Skarmory in most circumstances, 2HKOing Skarmory and most Corviknight sets and at least taking a solid chunk out of Celesteela. Sludge Wave nails Grass-types like Tangrowth, Tapu Bulu, and Rillaboom. Finally U-Turn is... well, U-Turn. Lets you pivot and scout switches and such. With that said, there are a metric crap ton of other options to choose from as well, so let's go over those.​
​

This bulky pivot set is arguably the most common and consistent set you'll see Landorus-Therian running. It capitalizes on Landorus-T's strengths (Intimidate, good typing, good natural bulk, etc.) to blanket check a huge array of different physically-oriented sweepers. Earthquake still does respectable damage even without investment thanks to Landorus-T's high base Attack stat. U-Turn lets Landorus-T scout switches, which it tends to force a lot. Landorus-T is one of the most consistent Stealth Rock users in the entire tier, and is often the go-to user of the move for many teams. Finally, Toxic punishes bulky Waters, Grasses, and Grounds (including opposing Landorus-Therian) that want to switch in on him, and synergizes well with Landorus-Therian's strong Earthquake as most Poison and Steel types don't want to stay in to take it. As with Landorus-I, there are plenty of other options to look at.
​
Only when the last tree has been felled, the last fish caught, the last river poisoned, will we realize we cannot eat money.​
You must log in or register to reply here.
Share:
Facebook Twitter Reddit Pinterest Tumblr WhatsApp Email Share Link
Top