Staff member
Moderator
Satoshi and Go have have gone to Shoot City Station to catch a train to Lateral Town in the Galar region. But when they board a train while running after a masked boy that dropped his ticket, Satoshi touches a mysterious stone that was left behind in a reserved seat which turns him into a "mean Satoshi"....?!

As they move through the cars in search of the masked boy, they discover a lot of Fuwante. Go is cautious, but Satoshi sets the Fuwante loose on Go and explodes with laughter when he sees him run away in fear! Go gets frustrated at how Satoshi calls him a coward and is acting uncharacteristically mean in general, but is also starting to feel supicious. However......?

Just then the masked boy appears before them, but immediately afterwards the train is shaken by an impact. It turns out that the Mikaruge that had been sealed inside the "Keystone" Satoshi touched has woken up and is going on a rampage, angrily demanding the return of the "ill-natured spirit" that has entered Satoshi. Will the group be able to return the "ill-natured spirit" to Mikaruge without any trouble arising, thus returning Satoshi to normal......?

Lots of Ghost type Pokémon are gathered in the train; Not just Fuwante, but also Nukenin, Yabacha, Mikaruge and more! And Satoshi's Gangar will appear as well?!

Onion, the Gym Leader of the Galar region Ghost Gym, is going to make his debut in the Pocket Monsters TV series, which airs every Friday at 6:55PM on the TV Tokyo Network! Onion, the mysterious boy that has an emotional bond with Ghost Pokémon, is going to play a major role for two weeks straight! Our spotlighted cast member is voice actress Chiyuki Miura, whom we've got a comment from! 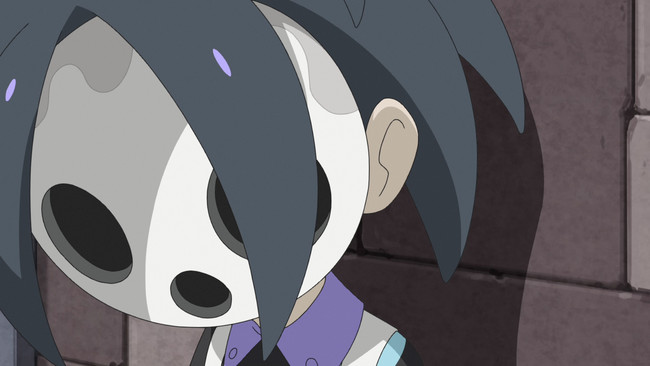 In "The Ghost Train Departs...", which will air Friday December 17th, Satoshi and Go have gone to Shoot City Station to catch a train to Lateral Town. After seeing a masked boy drop a ticket, they decide to get on the somewhat creepy-looking "Ghost Train" in order to return it... But as they make their way through the train searching for the boy, Satoshi bumps into a mysterious stone, which seemingly leads to him starting to act weird...? 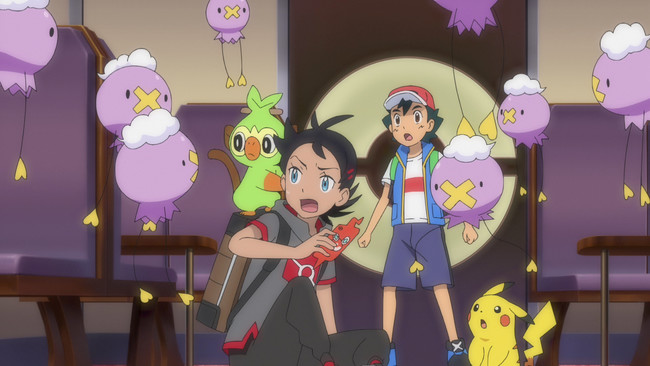 Then, in "Gangar Does Its Best! The Road to Kyodaimax!!", which will air Friday December 24th, Satoshi and Go visit Onion, the Gym Leader of the Ghost Gym in Lateral Town, in order to make Gangar Kyodaimax. Onion tells them that Kyodaimaxing Satoshi's Gangar requires having it drink Dai Soup made from Dai Mushrooms. Will Gangar be able to gather Dai Mushrooms from the forest where lots of unique Ghost type Pokémon live without any problems arising, and then Kyodaimax?! 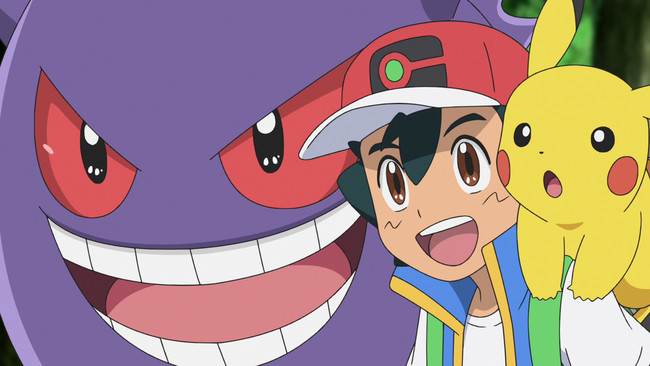 What kind of role will Onion play in the story of Satoshi, Go and their friends?! This arc is a must see for Pokémon fans, so make sure to keep your attention on it!


We have received the following comment from Chiyuki Miura, the voice of Onion! Allow us to introduce her: 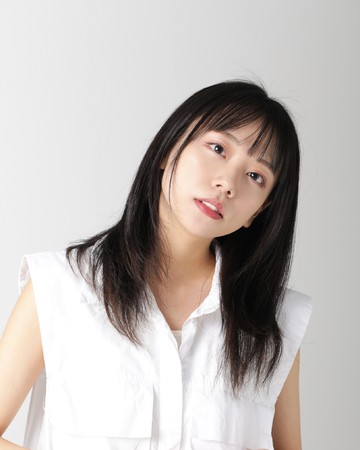 I was extremely happy when I learned I got cast. I've watched the Pocket Monsters TV series ever since I was a kid, and I have more memories tied to it than almost any other anime, so I can't believe I've going to be in it as THE Onion-kun! I gave the role my all, knowing that this is an extremely appealing character that lots of people really fell in love with when they played the video game, so he has to be portrayed with extreme care.
Onion-kun is so reticent it seems he's straight up bad at talking to people, which is precisely why I played every single word of his with great care while talking them over with the sound director. I'm looking forward to being able to bring you a new side of Onion-kun you didn't get to see in the video game, and I hope it will make you love him so much more. Please keep an eye on him as he tries his best in his own little way.
-Chiyuki Miura, voice of Onion
Last edited: Dec 8, 2021

Arent Emmet and Ingo train leaders and doesnt one of the two use Chandalure?
Eevee is the best

KenzeyEevee said:
Arent Emmet and Ingo train leaders and doesnt one of the two use Chandalure?
Click to expand...

Ash sure is getting a lot of focus episode lately. Well I'm curious about who is going to be his opponent this time, assuming it's the arc where his gengar well Gigantamax its probably going to be Allister.

Gengar is temporarily leaving Ash? Guess all of our jokes about Gengar getting shafted is finally coming to fruition with an arc.

Wonder if they will somehow try to tie in it's previous trainer?

Feel free to add me
M

Hopefully Gengar is a focus in this episode or at least involved in some way.

KenzeyEevee said:
Arent Emmet and Ingo train leaders and doesnt one of the two use Chandalure?
Click to expand...

Would be great if they appeared again

Biff calm down you're back with us now.

Didn't we have a ghost train years ago?

What is this now? A Demon Slayer arc?

"Pokémon Journeys sucks and then you die"

If there’s any legacy character that I would wanna see who uses Ghost-types it’d be Agatha. And if this is a start to Gengar’s redemption arc she’s the one for the job

nuzamaki90 said:
If there’s any legacy character that I would wanna see who uses Ghost-types it’d be Agatha. And if this is a start to Gengar’s redemption arc she’s the one for the job
Click to expand...

Phoebe, Agatha, Shauntal, Allister, Fantina or Morty would all be great options.
Leader of the Totodile Army
D

Chauntal? There was some speculation about how one of those silhouttes could be shauntel
W

Zoruagible said:
Hope this is Allister's debut, perhaps he can give the Galarian Yamask line some actual spotlight!
Click to expand...

His ace would probably be Cursola tbh

Also interesting to note that Ash's Gengar has a unique color scheme so that may differentiate it from Allister's Gengar if he also has one.

Rune Knight said:
Also interesting to note that Ash's Gengar has a unique color scheme so that may differentiate it from Allister's Gengar if he also has one.
Click to expand...

stop giving Teravolt hope
"Come aboard and bring along all your hopes and dreams! Together we will find everything that we're looking for...........One Piece!" 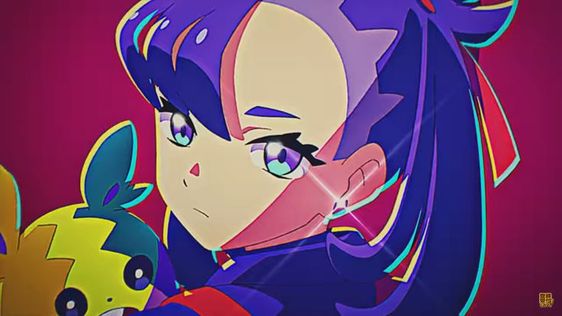 Wait, wrong franchise
"Everyone creates the thing they dread. Men of peace create engines of war. Invaders create Avengers. People create... smaller people? Er... children! I lost the word there. Children. Designed to supplant them. To help them end."

I wonder if Gengar dies at the end of the episode? 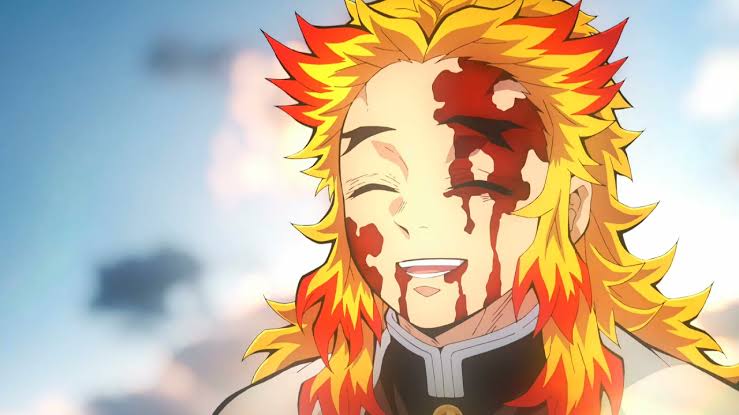 don't forget the real infinity train, where the possibilities are endless! including the chances of pain and suffering

"Come aboard and bring along all your hopes and dreams! Together we will find everything that we're looking for...........One Piece!"