diakyu said:
Cynthia getting new team members so we can one day see the greatest thread this forum has ever seen from the sheer amount of cope. When Leon beats Cynthia.
Click to expand...

Tons of fun will be had on that day...

Staff member
Moderator
Be careful. Too much sodium is bad for you.

diakyu said:
Cynthia getting new team members so we can one day see the greatest thread this forum has ever seen from the sheer amount of cope. When Ash beats Cynthia.
Click to expand...

Where’s the correlation? Also implying anything will ever surpass the Kalos League in terms of salt lmao

Tons of fun will be had on that day...
Click to expand...

Make sure you have some Popcorn ready for that day

Ignition said:
Where’s the correlation? Also implying anything will ever surpass the Kalos League in terms of salt lmao
Click to expand...

Yeah I think Ash beating Cynthia could finally be the usurper. Especially if she isn't even Ash's final opponent there

Red and Blue said:
Make sure you have some Popcorn ready for that day

Yeah I think Ash beating Cynthia could finally be the usurper. Especially if she isn't even Ash's final opponent there
Click to expand...

Ash has been set up to defeat Leon for most of Journeys so I don’t think people will get too upset if beats Cynthia. I’d agree if she was being set up to be his final opponent but I see the “controversy” being tame especially with a lot of fans wanting Ash to be the first to beat her since DP mentioned the Champion League. If there’s any loss this saga that would come somewhat close to it, it’d be against Leon in the finals.

Cynthia has Kommo-o. Neat-o. It's interesting that they decided to give her a Gen 7 Pokémon. If that's the case... do you guys think that she will be using Z-Moves in her Championship matches? Someone other than Ash has to and the others seem to use G-Max like Leon and Raihan and others have potential for Mega-Evolution like Cynthia and Garchomp and Leon and Gyarados.

We don't even know who are the remaining Top 8 members so if it's Diantha and Steven, then they also have Mega-Evolution.

Just some things are interesting to think about.

Mythical-Moonlight said:
Arceus Christ that first post has got to be the longest page any thread on this site has ever had
Click to expand...

(It's going to get even longer, I have more stuff to add)

I'm actually glad she has Kommo-o seeing as it never got good spotlight in SM.

Dephender said:
(It's going to get even longer, I have more stuff to add)
Click to expand...

More?! How much more could there possibly be?!
Youtube Channel

Dragalge said:
I'm actually glad she has Kommo-o seeing as it never got good spotlight in SM.
Click to expand...

It literally got spotlight a dozen episodes ago in Alola.

~ When you know you could've gotten a Sitrus Berry instead. ~
Youtube Channel - Pokémon Brilliant Diamond
The Bond of Aura - Chapter 17: A Christmas
~ As December arrives, Lucario experiences the thrills of the most joyous of times, though not without its share of personal growth... ~
​
B

Shirona has a Jyararanga, pretty cool I've been super tired of Gablias and this line needed some more representation.


Dephender said:
HERE'S WHAT MAKES SATOSHI AN ANGEL:
HE ACTS EVEN WIHOUT PERSONAL STAKES! SATOSHI'S PURITY
Satoshi is really pure, especially when it comes to Pokémon. One episode that really made me go "Wow, he sure is giving it his all" was episode 10, "The Kairyu Paradise and the Hakuryu Trial!", where he put his life on the line for Hakuryu's sake by participating in its training. His purity and dedication really stood out here. What's so nice about Satoshi is that he's willing to do thing without any personal stake in the matter. Later in that episode, he also just abruptly proclaimed that the reason Hakuyu grow hands when they evolve into Kairyu is so that they can help others; He's normally pretty bad with words, so it was nice to see to him say something that inspired
Click to expand...

I really like that last line? That was a very memorable dialogue and well-spoken for Satoshi actually. I still remember it to this day, Kairyu really is the best of his PM2019 team for me and I hope we get more screen for the barney-looking sweetheart. He's thematically the closest to Satoshi, how fitting Hakuryu has angelic looking wings on its head.

Dephender said:
HERE'S WHAT MAKES GO AN ANGEL:
GO ACTING LIKE A DOTING PARENT IS JUST TOO ANGELIC
Go is extremely affectionate with his Pokémon. A very good example of this is episode 69, "I'd Like To Keep An Eye On Their First Errand!", which starts with a scene where he and Koharu are acting like doting parents arguing over whose children are the cutest. It's so nice to see Go be this enchanted by Sarunori nowadays when you think about the stern refusal to get anything but Mew that he used to have. You could say that the way he gets influenced by how cute his Pokémon are is pretty realistic; Maybe everyone would act that way if they became Trainers.
Click to expand...

Parent!Go with his children-teen-adult 'mons was something I always adored that I'm glad they're actually acknowledging. His starters are his lovable children and troublesome teens. Funny how Sarunori seems to be his most troublesome spoiled compared to mild mannered Messon and more independent Hibunny.

Dephender said:
A KEY MOMENT WHERE ANOTHER CHARACTER WAS A LITERAL ANGEL:
IRIS IS NOT AN ANGEL, SHE'S A CELESTIAL MAIDEN!
Iris from episode 65, "Dragon Battle! Satoshi VS Iris!!", is lovely as well. Since she's become Champion and switched clothes, she stands out from all the other returning past series characters as the one who's changed the most. The art in the episode was great, and even though Iris kept moving around and changing expressions all the time, she got to show some mature ones as well.
Click to expand...

Why Iris? Why not Hikari or say Shigeru (a more recent return) is it to take a chance to reference how her Champion clothes are based off celestial maidens clothing? Either way I love they acknowledge how pretty that episode looked with that one wicked key animator and her progress/change being the craziest. They animated the movement of the dress and facial expression super dynamically. Glad they pulled that off with COVID-19 eating them alive.
Last edited: Nov 30, 2021

Cynthia has two pseudos on her team now, no wonder Ash is going to need to step up his game 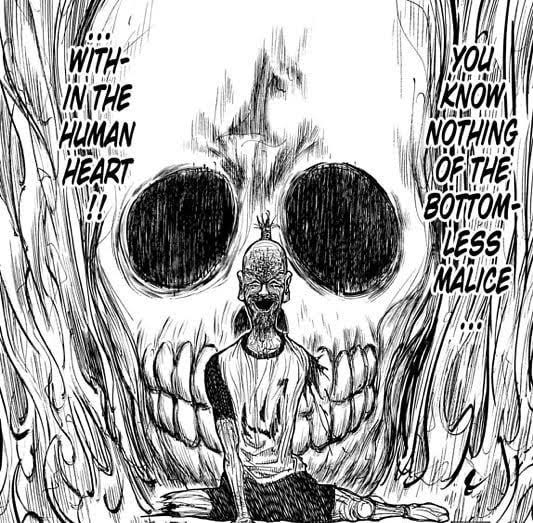 Wow I had never seen the manga version of the panel. It looks even more sinister than the anime's
"Come aboard and bring along all your hopes and dreams! Together we will find everything that we're looking for...........One Piece!"

mehmeh1 said:
Wow I had never seen the manga version of the panel. It looks even more sinister than the anime's
Click to expand...

"Do not underestimate humanity's infinite potential for malice!"

HXH is timeless. Damn you Togashi, just hire someone to draw the manga at this point and so we can get back to rolling. I want to see this manga through before I'm 30.

Well why dont they just spoil everything?
Eevee is the best

mehmeh1 said:
Wow I had never seen the manga version of the panel. It looks even more sinister than the anime's
Click to expand...

Togashi can drew pretty neat when he’s in the mood : 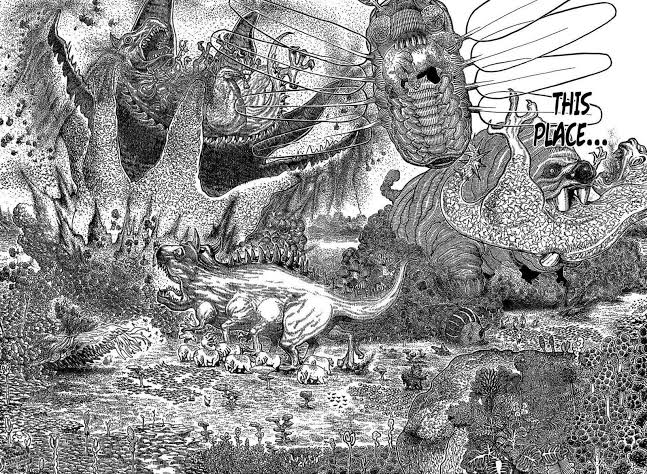 And when he’s not feeling it : 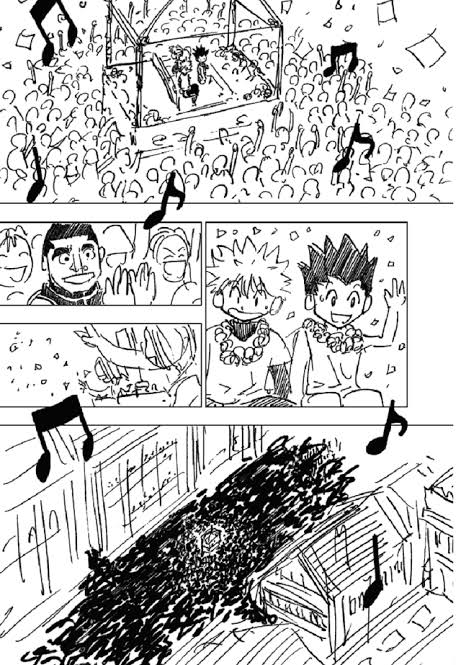 I'm quite worried about the alternative versions of the TRio. Not only because they look like competent and dangerous, but the way they talk in the trailer... It's like they have no emotions, as if they were robots. They are wearing battle armors, but do you think maybe they have cybernetic implants or something? It's really creepy.