I always have wierd dreams ...I had a dream once ....2 years ago in which my boyfriend left me for a pig...

I finally dreamt a Pokemon-related dream again \o/ Haven't in a while, I don't think. It was about my younger sister (I don't even have a younger sister, let alone a sibling) getting married to Brock (if this was real I'd be so mad at my sister), who then turned into a Cobalion, Sacred Sworded everyone somehow with the exception of me and my sister, and skipped off to Floaroma Meadows with one of the bridesmaids, who turned out to be Misty from the anime.

i had a dream about Luigi's mansion and wario land and pokemon it was scary because then it switched to a dream about me running away from a Minotaur that had a gun that shot giant marshmallows with spikes. weird.
the year 20poke [two thousand pokemon] :

AND HERE IS THE MASCOT!!![with girlfriend]

I dreamt that Harry Potter and Voldemort teamed up to save Christmas.

Apparently the Grinch is a wizard's mortal enemy.

I wish I could always remember what I dream. I usually don't. 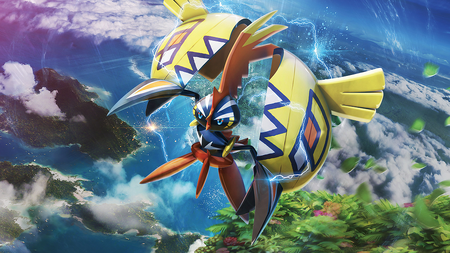 Dreams are weird. What are they exactly?
I've had two dreams that stick out in particular:

One was....scary, to put it in the least. My friends were being attacked by fleshy skeletons with the look of Giygas on their face while the Devil swept up blood. 'twas scary....

The other was weird but MUCH nicer. I was in some facility that reminded me of Portal. I don't recall much except for MLP, a weird receptionist, a moving platform, and then going down an elevator to... I can't recall what happened next.
Ummm..... Hi! I'm new!

I had a dream that Serebii invited a lot of his forum goers, including me, conveniently near where I live. During this, we were having a game during which Serebii sadistically puts someone in an ice cream freezer.
I'm a Greninja fan. Best Pokemon and Smash Bros. character.
G

I had a dream I was kidnapped and they put me on the hood of their car then drove away. I had to jump off and for some reason ran back into my house, to my room, and jumped out the window. I ran to my friend's house and nobody was there and they came driving down the street and kidnapped me again. I woke up the second time. ;-;

Moonlight Absol said:
My best friend has dreams where I die
Click to expand...

Sad. I don't like dreams where people die, its just...*shivers*
M

Me neither. Especially when its an infant...like this one nightmare I had *shivers*...
[img139]http://i.imgur.com/4Gisy0X.png[/img139]
FF.N★ Author Profile ★dA★ MAL★tumblr★writing blog​

I have some rather disturbing dreams sometimes. >.<
R

He is already here.

I always have happy kid dreams, like this one where I went to the pool and my friend was eating a copper necklace and my other friends were eating willow trees... and then I drown.

I'm just going to go with my wierdest dream ever:

About a month ago I had a dream where me and my best fiend were taking a tour of a Cheeto factory (it gets wierder). Halfway through the tour the Cheeto's all came to life and started attacking the factory workers. Me and my friend randomly got pistols and started shooting the Cheetoes, which exploded when we shot them. A couple minutes later they started pouring down a hallway to the left like a flood of water, so we climbed onto a scaffholding nearby and waited there. Then I woke up.

Thanks to pkmnfn for the awesome Team Pose!

I'm always having weird dream's some are inappropriate other's just scare me,like people being killed or if I get killed.One time I dreamed a satellite fell from space and crushed me and my family.Enough nightmare talk for me time to move on to weird dream's...last night I dreamed I was arrested by the American idol judge Steven Tyler and instead of going to jail I was locked in a grocery store freezer however they let me out because as long as I was in the freezer they couldn't watch their television's? I have to say that was the one of the weirdest dream's I ever had.

I am the leader of the pok'emon clan known as the fullbringer's. If you're interested in joining my clan or warring with us please pm me and I will reply as soon as possible.

Last night I had a strange dream about the Pokemon Diamond and Pearl anime 0_o;

In the dream...MAX was traveling with Ash, Dawn, and, Brock. Yes, THAT Max. As in May's younger brother.

Also, Ash had his Torkoal on him. I don't think he ever used Torkoal even in the Sinnoh League, now that I mension it...What happened to that tortoise, anyways? @_@;


Anyways...It had something about.....A wild Driftloon following Ash and his crew. ; Because it made friend's with Ash's Torkoal.

And Ash and Brock were apperently training it together (k...).

And Max had psychic abilities like Rui from Pokemon Colloseum and knew when Team Rocket was coming (; umn...wow! XD; ).

And, then, later on, it's reveiled that Driftloon evolved into a Driftblim and Ash captured it and added it to his team afterwards (and said training it felt like a waste of time cuz it toke FOREVER to level up...0_o; even though everyone like toke turns training it?...yeah, didn't sound much like something ash woulda said, though....i think anyways. not sinnoh ash probably/possably most likely XD; )...and Dawn had a Mismagious. And they hug their ghosts and say that they both h*te Team Rocket's Meowth and Brock say's he does too.

Then there was something about....All of Dawn's Pokemonin in UNOVA being....Balloons with her Pokemon's faces on them?....And it showed the picture of this too where her regular B/W2 picture was on serebii's website and I could zoom in on it. One of the 'balloons' looked like a wooper face with Shinx/slightly enlongated Teddy Bear ears.

Well one of my dreams consisted of eating until I puked.

all of you posting about having dreams on SPPf, pokemon anime and pokemon games, your all obsessed and need help.

Did you seriously just bleep out hate? >.>

I have this recurring dream where my family takes a celestial boat to a house that's completely identical to ours. I run away from a very slow-moving living bar of soap. I go into my room and build an army made out of Legos. Not minifigures, but kind of misshapen monsters and dragons and stuff like that. And I build a giant lego sword. Right when I finish building, the bar of soap gets to my room. After a long battle, we capture the soap and flush it down the toilet. And all the while I'm slowly turning into a minotaur.

Top THAT.
Oh hey, I have a Nuzlocke story.​

I also had a bunch of other dreams too about my Pokemon Pearl game. One had something about blowing up this cave to escape Team Galactic....I do not enjoy violence very much but it was kinda epic.

The other dream wasn't as epic, though....I kept losing my Pearl game/other DS games of mine @_@;
J