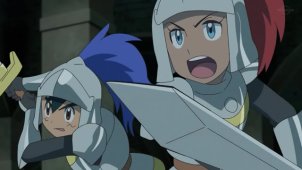 While training Farfetch'd, Ash learns that the Kalos Elite Four member Wikstrom is currently helping train various Pokémon and trainers that want to show their true strength. Ash is enthused and he takes Farfetch'd, while Goh takes Scyther, to Wikstrom's training grounds in Kalos. Will the training succeed?

Has Ash's G Farfectch'd evolves in Sirfectch'd and Go's Scyther evolves into Scizor?
And Mega Scizor Debute?
And about Honedge and Dedenne?

TomRC121991 said:
Has Ash's G Farfectch'd evolves in Sirfectch'd and Go's Scyther evolves into Scizor?
And Mega Scizor Debute?
And about Honedge and Dedenne?
Click to expand...

We do not know yet. The episode has not aired in Japan yet.
M

TomRC121991 said:
Has Ash's G Farfectch'd evolves in Sirfectch'd and Go's Scyther evolves into Scizor?
And Mega Scizor Debute?
And about Honedge and Dedenne?
Click to expand...

Yes Goh's Scyther evolved into Scizor and Ash's Farfetch is still Farfetch but it learned to fly! Wow

What the? So neither is defeated, not even Farfetch'd nor Scyther... I know everyone is not battling seriously, but that's something...

Glad to see a trade simulator though... Probably the Link Cable counterpart...

I wonder when will Farfetch'd will evolve...

Well I thought it was going to be a good episode, but then they pulled that Scyther -> Scizor crap.

Don't get me wrong, I'm fine with Scyther evolving, what I'm not fine is that this was the perfect set up to evolve Farfetch'd even more than Scyther.

But then the episode was like: Nah Farfetch'd learns Detect, and oh yeah by the way Go let's give YOU the evolution even though there was MORE focus on Ash and Farfetch'd.

And by the way LMAO at those who said traded Pokemon needed to be permanently traded to evolve trade Pokemon. I knew the anime wasn't going to stick with the ridiculous game limitation.

So objectively the episode was good, Farfetch'd appreciates Ash more, learned detect. But narratively it was beyond garbage, I really hate that Tomioka is probably going to be responsible for the evolution of Farfetch'd, when he should've focused on Riolu into Lucario.

Now we wait 20 episodes for Rinto to show back up, this anime sometimes pisses me off......or a lot....lol.
Youtube Channel: https://www.youtube.com/channel/UCIVifm39zQmjiKXviwVdSiQ/videos
Favorite Pokemon (Up to 8th gen): Favorite Pokemon

The writers respected the Elite Four level, that was good news

Welp, I enjoyed the episode, mainly thanks to Goh just disappearing from the screen on two occasions. Still, I'm kind of bummed that Farfetch'd didn't evolve here, as it means that we'll most likely have to wait a long time for the next duck-focused episode.

Didn't take long for the negativity to roll on in.

Ragnarok4 said:
The writers respected the Elite Four level, that was good news
Click to expand...

Not really... Kalos E4 still has "that" reputation of being the "softest"...

Great episode, farfetch'd didn't beat an e4 so people can't complain about that, instead it progressed it's bond with ash, really nice to see.

Ash jumping for that leek reminded me of him jumping from the kalos tower for pikachu, and seeing farfetch'd fly was pretty funny. Great episode, can't wait to watch wikstrom's remarks on best duck later today

I hope to see scizor more often now, although the boy will most likely be forgotten

thedarkdragon11 said:
Not really... Kalos E4 still has "that" reputation of being the "softest"...
Click to expand...

So Farfetch'd can fly. Nice.

I wonder if Ash gets to battle Wikstrom later on?

Nah, even in the anime... Malva was beaten by a conference trainer...

thedarkdragon11 said:
Nah, even in the anime... Malva was beaten by a conference trainer...
Click to expand...

GhostWallker98 said:
Didn't take long for the negativity to roll on in.
Click to expand...

Of course not, the bitterness that they didn't do this for Ash's Riolu but Farfetch'd, is going to be extremely bitter. And the fact is it will have even MORE time than Riolu, and all we got was Bea episode after Bea.

Instead of ONE damn training/focus episode on Ash and Riolu's relationship.

It makes me even MORE upset they gave Ash Farfetch'd RIGHT after Riolu. They really wanted to shove Lucario down our throats while crapping on Riolu's development, but because it's a past generation Pokemon, god forbid it get the focus it deserved.

I don't know if this Farfetch'd stuff was in development from the beginning or if someone raised fuss, and wanted more plot heavy stuff. If it was the former, then yeah I am PISSED, if its the latter, then its more forgivable but still Riolu deserved A LOT better than what we we're given. I'd say Raboot as well but at least with Raboot it was more on par with Go's character to at least get something in an episode I just don't like it because its his starter and deserved the a full focus episode.

But if we ignore how pissed I am about certain elements, this episode can still be enjoyed in of itself. I'm not that cruel. Its unfortunate that I have to look at it from the narrative perspective, and then I lose my damn mind.
Youtube Channel: https://www.youtube.com/channel/UCIVifm39zQmjiKXviwVdSiQ/videos
Favorite Pokemon (Up to 8th gen): Favorite Pokemon

Staff member
Moderator
So Farfetch'd takes 20 odd eps to finally show a full moveset only to immediately lose one come its next focus ep? I sure hope it was Focus Energy. It didn't even use it this week.