Getting, Skipping or Canceling Pre-Orders (Poll)

Skipping these games. Even if I had a Switch. They're just not for me. Every little bit I see that's released reaffirms that - despite me very often still replaying GenI even up to GenV - the apparent target demographic for Pokémon has changed and apparently excludes me.

Would I play GenI? Yes, I'm a bit tired of it, hence why I'm playing Emerald and Black atm, but yeah, I like those games and probably spent thousands of hours in Kanto.
Would I buy LetsGoPikachu/Eevee based on the material they've released what they're using to sell these games? Hell No.

In everything, the visuals seem very nice and that's great. But if the promotional material is to be believed, the core focus of these games isn't the adventure or the game aspect at all. It's just about being with your starter, grooming it, customizing it, petting it, feeding it, getting gifts from it, walking it. And that's fine. I've just come to realize that if that's what they're using for the promotional material, then I'm not the person they're wanting to buy their products any more. If they bring out a new Gen that's like GenV, hey, I'll be it! It's not me. It's them.

They're focusing on everything that pre-GenVI wasn't even a thing in pokémon games and they've definitely changed their target audience.

So that's pretty much the end of it for me.


BCVM22 said:
Which is absolutely what I said. This baseless fear that LGP/E will "infect" future iterations, and so people are begging for it to fail, even though there's no reason to think the former. It's precisely what I said - baseless, petty, and bitter. I'm aware that "fan" is an ugly enough word now that it means "selfish enough to demand the franchise cater only to them," but what if it didn't mean that for five minutes?

It would be a valid argument if these games were replacing the more traditional entries, but they aren't. Not even a little bit. They've said repeatedly that 2019's entries will be more traditional, and less like the changes being made for LGP/E. But even putting that aside, of course we don't know anything else about the games yet. They aren't going to reveal that until LGP/E have arrived and settled in for a few months

Kanto didn't headline its appearances in Generations II or IV, which was the precise wording I used - "headlining," as in "not the focus." And even if you do count that, HG/SS were a decade ago, which doesn't change my point much.

They've gotten rid of wild battles and...?
Click to expand...

It's not my thing to reply to page1 comments while we're on page5, but I just have to.

1. If being a fan doesn't allow for expressing personal hopes in the sights changing directions if one doesn't like the one franchise is currently following, then that person can only be called a criticaster and not a fan. If that person still sees him/herself as a fan, than that person must get a reality check to see that the current state of the franchise might not be geared towards him/her anymore. It's a sad truth. I love the pokémon games, GenI-IV, V a little bit less, XI is barely playable but in truth, it gets on my nerves, and GenVII is just downright not my cup of tea/unplayable for me. I can honestly say that I'm a fan of GenI-V, but that I'm not a fan of the main outings of GenVI and GenVII - and LetsGo as per what they've released thus far. Omega Ruby was nice though, mostly because the DexNav, which was gold.

2. These games indeed aren't replacing the "traditional" entries, the problem lies in the overarching differences made. Ever since GenVI (GenV arguably, because linearity), the games have been becoming simpler and simpler and simpler. Heck, the words used to describe LetsGo were to make it all simpler. In terms of overarching direction the franchise is becoming dumbed down and LetsGo looks like you only need one braincell to play. I think it's very fair to hope (even wanting to send a message, as childish as that is) that GameFreak at least tries to listen to fans that still want a challenge and don't want a repeat of the glorified handholding from start to finish that was Sun and Moon and pressing a Z-move to win almost every battle instantly.

3. You have to be living under a rock if you haven't seen the Kanto Spam everywhere. Yes, they didn't headline a game, and they weren't the second region since HGSS, but XY gave out Kanto Starters, had mostly GenI Mega's, Santalune Forest was basically Viridian Forest, SM only had Kanto Pokémon as Alolan Forms, etc. The list goes on.

4. They've gotten rid of wild battles and...? AND?! They've gotten rid of wild freaking battles, that's about 40-60% what you spend doing in a normal game! You're acting as if that's nothing but that's huge.
Answer to all the bad things in the world: Give up on trying to make everything better. Hence, accepting it for what it is. YOLO! <- Click the link and daw.. -.-

The first Pokemon game in.... what year was Black/White released again? lol Regardless it's probably the first game in 10 years that I'm not pre-ordering. I need to get a Switch for one, and until a main series Pokemon game is out there isn't a major rush to get one. I'm waiting on a good Bundle deal with Odyssey to swipe up, one that actually goes below $300. Within a year you could buy a Xbox One or PS4 and get TWO AAA titles for free with it.... Greedtendo is a different story.

Let's Go trailers aren't doing much to convince me it's a good game, it just looks like a reboot that is far inferior compared to HGSS and ORAS. Wake me up when DP get remakes, nobody asked for more Kanto remakes..... apart from gen wunners.
Fanfic Corner:
Pokemon Excalibur - Ash's Galar adventure
Pokemon Chronicles season 2 - Stories with May, Misty, Tracey, Lyra, Gary, Dawn, Paul and various others after they parted ways with Ash

Definitely skipping these games, hopefully Gen 8 games do not disappoint. 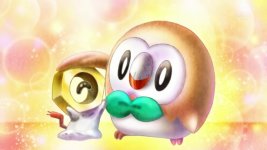 These games pretty clearly seem designed for an entirely Kanto experience, and I'm not sure I can see them adding the other 700-some Pokémon. If the Pokédex is your dealbreaker, you're probably going to find yourself waiting for Generation VIII.
​

While having the full 808 roster be accessible be more favorable, I think having just (pre)evolutions of Kanto Pokémon would've been nice as a "meet me in the middle" compromise.

Frankly, even if there was a way of getting the other 650 Pokemon at some point in LG: P/E, I'd still be hesitant to purchase these games since I can have every Pokemon in US/UM and have a better gaming experience without shelling out another $50.

Ironically, if post-Gen 1 pokemon were in this game, particularly those not connected to Gen 1 pokemon, I likely would have been hesitant.

For, Let's GO is the experience I've been wanting for Kanto since Lillie set off for the region at the end of Sun and Moon. I wanted to see Kanto with today's graphics (preferably with Lillie, but yeah), and the region is absolutely beautiful.

I will admit, having the Baby and evolved forms of Gen 1 pokemon would have been nice, but thay would've been the limit for me. Having Volcarona in this game would've been just weird.

I'm skipping this game because they take away many core mechanics (eg., wild Pokemon battles, held items, abilities) that make Pokemon interesting and fun for me.
https://youtu.be/PZC5p9xONvM

I’m definitely passing on these. I don’t have a Switch but even if I did, these games sound bad to me. They get rid of too many mechanics and I’m bored of Kanto,

Staff member
Moderator
Not pre-ordering either. But I'm interested in probably picking up Let's Go Pikachu (most likely -- depending on which version has the better exclusives, just like in the old days!). Hoping that Black Friday has good Switch offers and lets people pick a game. It'll be nice to move some guys over to the new games from Go. Got a new Lapras today that I want to move over when I can.

I was going to skip them at first, but ended up pre-ordering. First the bundle with the game, then cancelled that for the switch bundle... I don't know, it just looked so adorable! Few reasons I'm not skipping them is that I actually picked back Pokemon Go and I've been having fun. I would love to transfer some of them over to the game. One of my friends pre-ordered the Eevee version and we kind of want to go into the game together since we like Pokemon. Also, it feels weird skipping a game without not giving it a chance first.

Fire and Lightning Race Across the Heavens​
S

Definitely skipping this travesty of a game... I hope it flops

I've been so up and down with these games. The Kanto aspect keeps pulling me back. I feel like Spongebob at Sandy's house.
Go watch my stuff please.

Locormus said:
They're focusing on everything that pre-GenVI wasn't even a thing in pokémon games and they've definitely changed their target audience.

So that's pretty much the end of it for me.
Click to expand...

I just wanted to inform you, as it seems you may not have known, the Gen 8 title is coming out next year, and will continue in the vein of the main series.

Let's GO may not be for you, but the game you do want is coming, so you needn't worry about that. Game Freak hasn't forgotten you.

I have voted for LGE, as the Eevee version is going to be my main copy. But, I can't decide whether I should pre-order the PokéBall Plus Bundle or not...

If you intend to get the Poké Ball Plus, then yes - it actually saves you a few dollars.

I’m actually exited to try out the pokeball plus as it will be interesting to play the game almost using a pokeball. It’s also useful to use with Pokémon go from what I understand.
Sword and Shield Teams (teams sentenced to change until games release)

WhiteBlair said:
I have voted for LGE, as the Eevee version is going to be my main copy. But, I can't decide whether I should pre-order the PokéBall Plus Bundle or not...
Click to expand...