Just watched the subs. This was a busy Goh episode. I like how it serves as a nice bookend to his development, and it showcases just how much he’s grown from when we first met him. The flashbacks to the early episodes were a nice touch.

That said, I’m not a fan of how they handled the episode’s first act. I’m not opposed to Leon taming and eventually receiving Eternatus. But it was handled just so…weird. This should have been set up earlier with Goh at least knowing they were going to try taming it rather than doing it secretly behind his back.

I do like that he willingly gave it up to Leon, knowing that he wasn’t a good enough trainer to continue taming it and that Eternatus was extremely important to that region. It does show how much he‘s grown as a trainer.

I don’t really have any complaints about the rest of the episode. Team Rocket was used well here, and their role builds off of the last episode when they remembered why they were in Wyndon. I also liked that JJ knew they couldn’t steal Ash’s Pokemon until after the finals. I also like how Goh stood up on his own here and asked to handle things himself. Again, this shows some good character growth.

The only thing I wished we would have had in the later acts is Meowth translating for Perserker and the Galarian Meowth. I find those moments to be one of the highlights of the episodes where TR works with local “evil” Pokemon.

The Ash/Goh departure didn’t have a lot to it. It definitely doesn’t seem like an end-of-series departure. So I wonder what they have planned…

If I were writing this episode, I probably would have changed up the narrative order. I would have had the Nickit/Galarian Meowth/TR story first, then had the Eternatus segment, and finished with Goh departing for Project Mew. I think this would flow better, and it would allow them to set up the Eternatus reveal by having Sonia calling Goh asking him to come to the stadium for something.
Fanfiction Corner

I think by giving Eternatus to Leon Goh just screwed Ash out of winning the PWC. Ash then takes his anger out on Goh knowing he cost him the world title.
P : Please
A : Amour not
N : Need to be erased
K : (This letter is a symbol of rebellion in Thailand or whatever)
Y : YEAH!!! NEED HELP!!!

Goh: ‘So Ash what are your plans for today? Are you training for tomorrow?’

Ash: ‘Nope I won’t be doing anything’

LOL was not expecting to hear that

SatoSereFan224888 said:
I think by giving Eternatus to Leon Goh just screwed Ash out of winning the PWC. Ash then takes his anger out on Goh knowing he cost him the world title.
Click to expand...

Take a shot every time SatoSere brings up a situation involving contrived conflict and/or someone getting injured, or Ash not being in Paldea. We’d all die.

Decent ep for showinf Goh’s progress and having him reflect on how far he’s come. Nice seeing Cinderace reunite with the Nicket again. Nothing spectacular but the gatcha battle was better than I expected

It’s the type of ep that’s not bad by itself but annoying where it’s placed. Goh leaving was sudden but they kinda foreshadowed it in 122

Ryker101 said:
Goh: ‘So Ash what are your plans for today? Are you training for tomorrow?’

Ash: ‘Nope I won’t be doing anything’

LOL was not expecting to hear that
Click to expand...

Well, It has worked for him so far.

Otto's said:
Well, It has worked for him so far.
Click to expand... 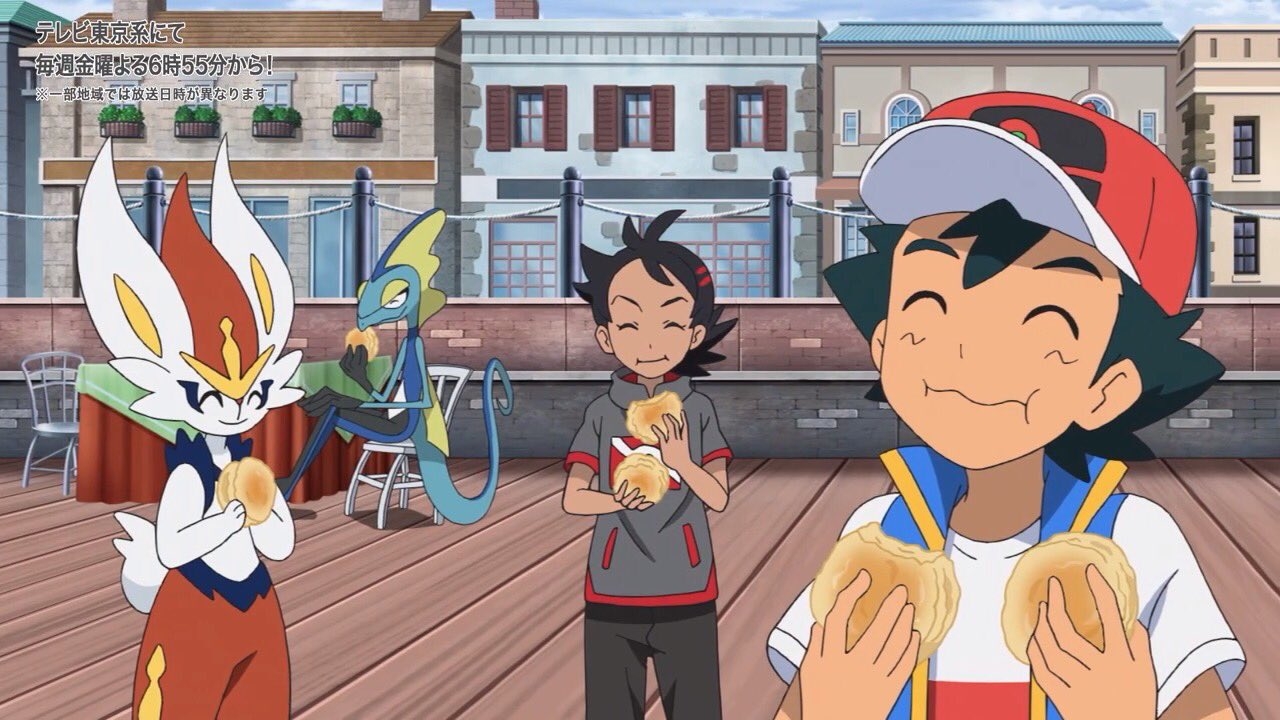 Me: "Inteleon you are a Pokemon. What the hell are you doing sitting at a Table?"

Inteleon: "Screw You! I am too Fly and too Fabulous to be sitting on a dirty ass floor!"

Episode went about how I expected. The Nickit have integrated themselves into the town so they weren't caught, and while it was nice to see their development, them not being caught makes me doubt we are ever seeing them again. Still Tokio and the Nickits have shown up so 'yay...?'

Eternatus leaving Goh's possession also isn't surprising, it was either going to be set free or go with Leon. Goh rationalizing that Leon should be able to handle Eternatus, and that is an important part of Galar's history both make sense, but the build up to, and the execution itself both lack weight. This really should have been a decision that Goh came to after working with Sonia and Magnolia (maybe Leon as well), but they really dropped the Goh working with Sonia plot, witch is a shame as it was my favorite part of the DD arc.

It was nice seeing both Cinderace and Inteleon, especially seeing both back were Goh first met them, but at this point they have both been so ignored by the writers that I don't know how I'm supposed to feel.

The episode did have some fun moments: Goh and Ash's reactions to the Trio being Perserkers underlings, G-Meowth for more pulls, the reactions to Arrokuda being swallowed, and the combination Pyro-ball at the end.

Debuting and underutilizing so many Galar pokemon was definitely not something I enjoyed (Cramorant and Arrokuda alone could have been fine), and Goh doing it on his own, while something I understand doesn't really carry any weight when the opponents are Trio and Pikachu could have soloed everything easily. That being said the episode was better than I expected.

Now Goh leaves for PM, witch will probably end up just being a raid against Regigigas. I was sort of interested in the raid as a precursor to the final expedition on table mountain, and was more excited for an expedition using different pokemon rather than a simple raid against a fairly boring legendary.

Though even if the raid turns out well, and the JN's staff have given me no confidence that they can do multi-battles well, and if Goh catches Mew, with what happened to Eternatus, I can see Goh just saying 'Regileki and Mew are so important to the team and understanding all pokemon, why don't you just take them.'

Really Goh just peaked early; catching multiple pokemon that we then either see in the lab or he takes with him, Sobble and Raboot getting screentime and development, battling against Flygon, Aeraodactyl, (weakend) Zapdos, Oleana and her goons, the Suicune poachers, Karate master, etc.

Then Grookey and Project Mew happened, and he was suddenly reset to rookie status. They should have just kept their original plans to have Goh and Gary battle each other.

As much as I like the idea of a Project Mew organization, the question of ownership just doesn't mesh with Goh's goal, at least not in a way that is appealing to me as a viewer.

TLDR, Goh actually catching and battling pokemon (and trainers) at his own pace in the first half of Journeys was far more interesting and enjoyable than his current disinterest in captures, or the Project Mew arc (at least in the overall manner that said arc has been blitzed through).

Rant over, LOL. Sorry for the negativity.


MetaMantis said:
It's as if these "fans" want a dedicated development episode centred around each and every pokémon.
Click to expand...

Every pokemon having an episode that explores its lore in a creative way actually sounds great. I am interested in pokemon because of pokemon after all.

Goh is off to gathering Ash’s friends for the finals, he’s using Project Mew as a cover up to surprise him.
Gen 4 fan
Top 3 favourite Pokemon:
Minun, Turtwig and Cyndaquil

AuraChannelerChris said:
Ash is way too much of a pollyanna since BW that "hatred" is such an archaic emotion to him.

In fact, there really hasn't been an episode where he and Goh hated each other from start to finish, and it's impossible for one to happen for plot reasons.
Click to expand...

What the hell’s a pollyana? What is that!

I hope Goh stays for the next anime. Even though the execution of his goals was sometimes quite wonky, his bromance with Ash was one of the highlights of JN and the PM subplot was the best companion goal (and it can be easily brought over to the next season, too).

I think (or rather hope) that he’ll get to the stadium during the climax of the battle to give Ash one final push.

Wow, so I totally forgot there was an episode this week. Goh gave Eternatus to Leon? Why…?

Blood Red said:
Wow, so I totally forgot there was an episode this week. Goh gave Eternatus to Leon? Why…?
Click to expand...

Ace-Barn said:
Every pokemon having an episode that explores its lore in a creative way actually sounds great. I am interested in pokemon because of pokemon after all.
Click to expand...

Not to me. That sounds hella boring, cause not every pokémon has some sort of lore that can be expanded upon to fit a single episode. You'd just get a ton of:
1. Oh look at this pokémon and how it does this thing
2. Exploring
3. Oh dear. Team rocket tries to steal it
4. We're blasting off again

Blood Red said:
Wow, so I totally forgot there was an episode this week. Goh gave Eternatus to Leon? Why…?
Click to expand...

Maybe actually watch the episode to find out?

SerGoldenhandtheJust said:
Maybe actually watch the episode to find out?
Click to expand...

SerGoldenhandtheJust said:
Maybe actually watch the episode to find out?
Click to expand...