So, basically, where exactly is the line between being inspired by another work and stealing an idea? Discuss.

And here's an awesome RPG. It has dinosaurs!

And a sprite comic, because I can't draw!

I personally believe that using another person's ideas is okay, as long as you have that person's consent. Currently, I'm writing a fanfic that uses plenty of Missingno. Master's ideas, but he's cool with that, so I don't think it's considered stealing.

Although, come to think of it, the whole idea behind fanfics is using someone else's ideas. We're using the ideas of the Pokemon company, but they really don't mind, so it's okay.

In very brief terms: Getting inspiration is when something you see in another story gives you an idea. Stealing is when you just take somebody else's idea (or prose, or character, or whatever) wholesale and hope nobody notices. Homage is when you take something reasonably small from somewhere else specifically because you want people to notice and surround it with your own ideas. Lengthy fanfiction reviewing guide / A more condensed version
Read and I will be very happy for a large number of reasons.​
P

I think inspiration is when someone or something influences your story. Stealing is taking most if not all of the story and claiming it's yours.
http://i48.*******.com/2hxbrbp.png

Inspiration doesn't even necessarily have to be related to said inspiration. You could be inspired by a popstar to become a rock-and-roll artist, for example. But as for writing; if someone sees your idea and says, "Hey, that's cool," and starts to write something with the same type of theme, it could be the exact same story with different names. This is stealing. Meanwhile the mentioned similar story is exactly that, similar, therefore is not theft.

A lot of it depends on how deep you go and how much you decide to "borrow." Let's say you like Final Fantasy's aspect of summon magic, where you call in different monsters and creatures of legend to attack your enemies as spells before they are dismissed. But, you don't want to steal the idea in a way that Final Fantasy fans will chew you out for. The trick is to take the idea as a catalyst and change almost everything about it except for the very core component that you like.

So for example, instead of calling in creatures as spells (which only certain characters can do in most Final Fantasy games), perhaps each person has a mythical creature inside them that represents their soul and spirit. And maybe instead of a spell, people can call forward this spiritual being by means of an artifact such as a special ring or armband, or the summoner has to do something a bit more on the macabre side, like shed a bit of their own blood while focusing their thoughts or speaking an incantation. And instead of using the same summons that Final Fantasy uses, you decide to use your own with names you made, such as a sun dragon that goes by the name of Sytranix, or a massive steel golem called Jagharal.

After that, you decide to write your own "rules" for summoning, different from what Final Fantasy dictates. In the universe you're creating, anyone can summon, but they need to discover who or what their spiritual creature is first. And maybe that creature forces that person to pass some kind of test first before they would be willing to aid that person. Lastly, the person and their summoned creature form a bond, and if something happens to one, it happens to the other.

So, in this case, Final Fantasy inspired you, but you changed so much about the concept that a Final Fantasy player would be pretty hard-pressed to tell and prove it was exactly Final Fantasy's summon magic that inspired this idea. When you strip things down to very core components and you change everything else, you're not stealing. Stealing would be using the exact same idea, all of its aspects, using it the same way, and proving you did nothing original with it.

Every artist and writer gets inspired by something, but you need to take advantage of the opportunity to bend and totally reshape it into something unique and different.

Well, I know when I'm inspired by something, I try to work with whatever idea that might be and morph into something that is my own. I'll try to use a music standpoint to illustrate what I'm saying. I generally produce pop music, because that is the type of music that I would like to sing. When I try to find my own ideas whether it be for song content or the actual instrumentation, I listen to artists like Lady Gaga, Britney Spears, or Ke$ha to retrieve ideas. I then take whatever inspiration I get, and mold something that is my creation.

Stealing, however, would be replicating something that has already been created and then claiming that it is your own idea. If I basically took the lyrics written by another artist or if I imitated the instrumentation of a song, I would be stealing, because it is not my idea, it is someone else's.

Did that make any sense whatsoever?
You gotta step into the daylight and let it go.​
R

Whoever said "everything original has already been done" has my full agreement. That said, you can only use so many elements that are similar to one other thing before people start taking notice. Eragon = fantasy!Star Wars, an observation that many others besides me have figured out. If people start making the same equation for your work (in your instance, a fanfic would be even just one person), you're doing something wrong. Inspiration is okay, but at least synthesize from many different sources.
[SUB]
Shiny Hunt Status
Darumaka (W, random) - found!
Tranquill (W, random) - found!
Maractus (W, Masuda) - 660 eggs hatched
Oshawott (W, Masuda) - not started
​
[/SUB]
F

It could be argued that my transposing of showtunes from Wicked, Les Miserables, Pippin and Hello Dolly is stealing. I do try to write them verbatim, but the situations tend to be a little different, or at least it's my characters singing and doing the actions.
For example, in Dancing Through Life, instead of Fiyero inviting his friends to go clubbing, a circus ringleader is goading the protagonist into a fistfight, trying to get Cole to eamine his worldview.

However, when I used One Day More, characters named John, Marcus, Epiny and Colette were standing on a barricade, preparing for war. And in A Little Fall of Rain, Marcus holds the dying Epiny in his arms lamenting her loss. Those are rather close to the actual Les Mis.

Well, I think that using general ideas that you see someone else use counts as inspiration (ie: including a youtube link to Miror B.'s battle music when Jack and the narrator battle Miror B. because bobandbill provided a youtube link to the same music when Wes and Rui reach Miror B. in his fic (which, btw, is extremely funny, and one that I highly recommend); or for that matter, having said chapter inspire me to write Miror B. into my story at all), whereas taking specific plot points would count as stealing (for instance, if I were to see a story where the main character is written into a crappy 3-line fanfic that consists entirely of him throwing a Master Ball at a Shiny Landorus and catching it, then teams up with the storyteller to get revenge on the author, I would call it stealing). Another way to differentiate for those instances that are more of a grey area involve giving credit where credit be due. For instance, I fully admit that Miror B.'s chapter of The Retelling of Pokémon Colosseum (seriously, if you haven't read it, you're missing out) where Miror B. is battled inspired me to write Miror B. into my own fanfic, complete with Youtube link to Miror B.'s battle music. However, I handled Miror B. rather differently in my story, making his afro essentially a black hole that he can store absolutely anything and everything inside. Also, Articuno_rocks is writing a fanfic that incorporates quite a few ideas that she got from my fanfic, but openly states that the ideas came from me (and for the record, yes, I'm cool with it), so that wouldn't be considered stealing.


PikaPika677 said:
I think inspiration is when someone or something influences your story. Stealing is taking most if not all of the story and claiming it's yours.
Click to expand...

You know what? I'd say that sums it up perfectly. 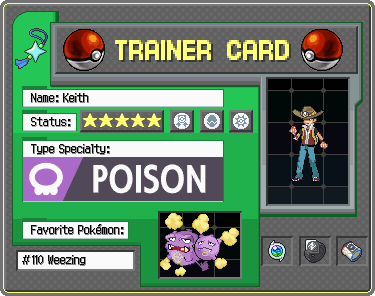