Staff member
Moderator
The fifth match in the first stage of the knockout round is Māmane VS Matsurika. And then, believe it or not, a Rocket Gang showdown between Musashi and Kojiro takes place in the sixth match. 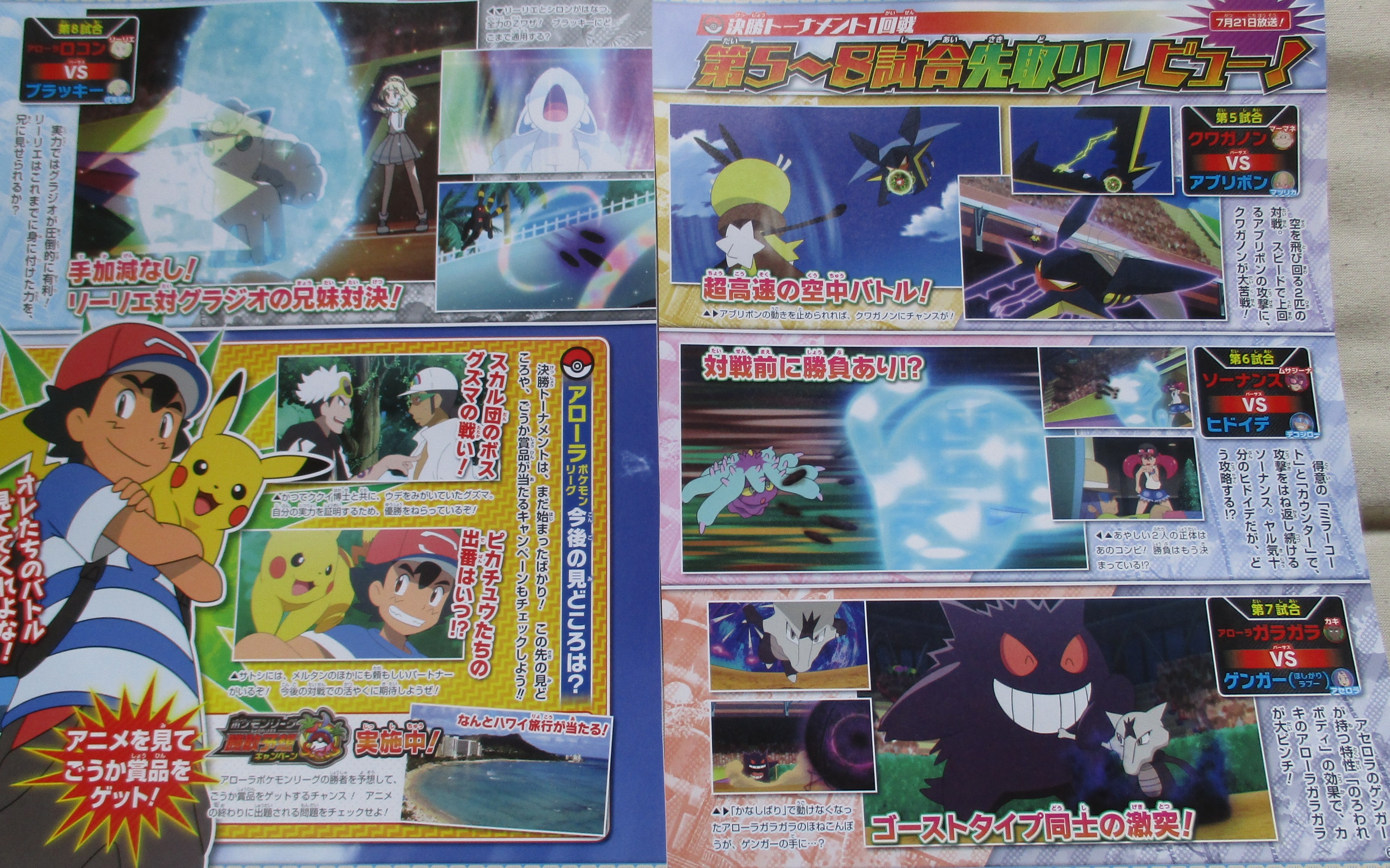 A sneak peak review of match 5 through 8 of the knockout round!
These will air July 21st!

Match 5: KUWAGANNON VS ABURIBBON (Māmane VS Matsurika)
A high speed battle in the air!
The two fight each other as they fly around in the sky. Kuwagannon has a hard fight on its hands as it takes on the faster Aburibbon's attacks!
(Blurb: Kuwagannon has a shot if it can stop Aburibbon from moving!)

Match 6: SONANSU VS HIDOIDE (Musasina VS Dekojiro)
The outcome is given before the match even starts?!
Sonansu keeps returning Hidoide's attacks using its specialties "Mirror Coat" and "Counter". Hidoide is extremely determined, but how can it overcome this opponent?!
(Blurb: The true identities of this suspicious duo is that of a certain twosome! Is the outcome of the match already a given?!)

Match 7: ALOLA GARAGARA VS GANGAR (GREEDY LAPU) (Kaki VS Acerola)
A showdown between Ghost types!
Kaki's Alola Garagara is in deep trouble thanks to the effect of Acerola's Gangar's Ability "Cursed Body"!
(Blurb: Alola Garagara is made unable to move by "Disable", and Gangar makes it so its Bone Club...)

Match 8: ALOLA ROKON VS BLACKY (Lilie VS Gladio)
No holding back! It's Lilie VS Gladio in a sibling showdown!
Gladio has the clear advantage when it comes to pure ability! Will Lilie be able to show her brother the strength she's gained thus far?
(Blurb: Lilie and Snowball unleash a fully powered Z-Move! How far can they push Blacky?)

What are the upcoming highlights of the Alola Pokémon League?
The knockout round has only just begun! Check out the upcoming highlights and the giveaway campaign where you can win extravagant prizes!!
SKULL GANG BOSS GUZMA'S BATTLES!
Professor Kukui's former friend Guzma has been training. He's aiming to win the league in order to prove his prowess!
WHEN WILL IT BE PIKACHU AND THE OTHERS' TURN?!
Satoshi has other reliable partners in addition to Meltan. You should have high hopes for the roles they'll play in their upcoming matches!
THE ALOLA LEAGUE OUTCOME PREDICTION CAMPAIGN IS CURRENTLY UNDERWAY!
Believe it or not, you can win a trip to Hawaii!
By predicting the winners in the Alola Pokémon League, you get the chance to get extravagant prizes! Check out the question asked at the end of each anime episode!
Watch the anime and get extravagant prizes!

Oh no.. Trouble
Love and be loved! Shower the world with kindness

Omg I’m so excited for this episode now. I have a feeling Jessie is gonna take down james if mimikyu will fight anything but Pikachu or James could take this!

You're so zetta slow

Wow, iwane is animating this episode? This is either a waste or this league will last much longer than expected
"The story of Dragon Ball has come to an end"

lemoncatpower said:
Omg I’m so excited for this episode now. I have a feeling Jessie is gonna take down james if mimikyu will fight anything but Pikachu or James could take this!
Click to expand...

I dont understand the love and truth part tbh
Love and be loved! Shower the world with kindness

You're so zetta slow

To denounce the evils of truth and love!
"The story of Dragon Ball has come to an end"

mehmeh1 said:
To denounce the evils of truth and love!
Click to expand...

Or confess their love to eachother lol? Just kidding
Love and be loved! Shower the world with kindness

Oh wow, Jessie and James survived. Go figure. I think Jessie will win and lose in the top 8. I could see Sophocles beating Mina as well. Though that might depend on her second Pokemon

mehmeh1 said:
Wow, iwane is animating this episode? This is either a waste or this league will last much longer than expected
Click to expand...

Well Sophocles vs Mina is also happening so I guess some air battle between Vikavolt and Ribombee may commence.

Hold on. A competition where in the end 16 people face off against each other out of a slew of a bunch of people? A person named Mina facing off against a yellowed haired guy? Mina confirmed to beat Sophocles like how the MHA Mina defeated Yuga!

Anyways, I'm actually excited to see this. I know the writers will probably have Jessie win, but I'd really like to see James pull through for this one. He deserves some spotlight since Jessie has competed in Pokemon Showcases and Contests and has managed to do okay for herself.
† I am a Christian, and not ashamed to admit it! Copy and paste this if you are too.†

So we have confirmed top 16 so far

xinfernapex said:
So we have confirmed top 16 so far

Oh boy, imagine if Kiawe is paired against Gladion instead of Lillie.

xinfernapex said:
So we have confirmed top 16 so far

I hope James wins this just because I really like James as a trainer. It could also end in a draw just to not have one look better than the other.
K

It does not seem fair Mimikyu vs Marinie
Love and be loved! Shower the world with kindness
T

That sucks if kiawie or lilie is eliminated in this round. And with 6/8 confirmed and gladio still in the rest 4 people to battle.... F

Red and Blue said:
Oh boy, imagine if Kiawe is paired against Gladion instead of Lillie.
Click to expand...

That’d be a pretty cool matchup.

That just leaves Lillie’s opponent. Least if it’s the Mudbray guy then Snowy would have the advantage, but it’d be cool to see Acerola or Plumeria IMO

This could mean this round is 1vs1. I was expecting 2 vs 2 at least. Can James use stufful or bewear if it's 2vs2?

I called this ironically in another thread so this was a surprise. I swear if Bewear comes to get them before the match ends. Also curious on who’ll get the Z Ring. James would have a better use as Mareanie resists Let’s Snuggle Forever

KenzeyEevee said:
It does not seem fair Mimikyu vs Marinie
Click to expand...

Ignition said:
I called this ironically in another thread so this was a surprise. I swear if Bewear comes to get them before the match ends. Also curious on who’ll get the Z Ring. James would have a better use as Mareanie resists Let’s Snuggle Forever
Click to expand...

Could you imagine if Jessie has the Z-Power Ring in this battle which puts James at a disadvantage, and at first Jessie seems to have the upper hand and is winning the battle however just when she thinks she's won and is about to finish James's Mareanie off to win the match, James's Mareanie sheer will power to not lose and to impress James winds up causing it to evolve into Toxapex which leads to the tide of the battle changing to James's favor and he and his newly evolved Toxapex win the match.