It was announced on the 6th that popular voice actor Aoi Yuki will be appearing in the anime "Pocket Monsters", which is currently airing on the TV Tokyo Network (on Fridays at 6:55pm), for the first time in the about 7 and a half years since the October 2013 broadcast of "Pocket Monsters Best Wishes". In "Dragon Battle! Satoshi VS Iris!!", the episode airing May 7th, she will be appearing in the role of Iris as a battle between her Kairyu and the Kairyu belonging to the protagonist Satoshi plays out.

This May 7th episode is a story where a battle between Dragon type Pokémon plays out. Satoshi is participating in the Pokémon World Championships, aiming to get a battle with Dande, the Greatest of Them All, and has now won against many strong opponents and advanced to 184th place in the Super Class. He then receieves a battle invitation from Iris, a former travel companion of his. Iris had set off on a training journey together with her partner Pokémon Kibago, aiming to become Dragon Master, but it appears she has now returned to the Isshu region. As it also seems she has registered for the Pokémon World Championships, Satoshi and Go immediately head for the Soryu Gym in the Isshu region.

Wielding the powers she and her Partner Pokémon have now gathered, Iris challenges her former travel companion Satoshi to a no-holds-barred battle! The episode then shows us what happens in this battle, which has advancement to the Hyper Class on the line.

This is Yuki's first appearance in the Pokémon anime in quite a while. "I feel really honored to once again participate in the "Pocket Monsters" anime as Iris for the first time in about 7 years", she said with joy, "and while I believe there are going to be people that will be encountering Iris for the first time in this episode, it's absolutely packed to the brim with the things that make Iris and Dragon type Pokémon so appealing, so I hope it manages to make them love her and her Partner Pokémon."

"As for those of you who are looking forward to seeing her again, I can tell you that you can REALLY feel how much Iris has grown, so I really want you to pay attention to that! More than anything else, the interaction between her and Satoshi after all this time is going to be something that will really resonate with long-time viewers. This episode is one that can make you once again feel just how fun Pokémon battles are, so I hope it will deepen your "Pokémon love" even further."

The Pokémon anime currently on the air is the 7th in the series. It's a story set in all the regions that have appeared thus far, with all kinds of Pokémon that live in these regions appearing as well as the double protagonists Satoshi and Go adventure around various places alongside their Pokémon.

One day a letter arrives for Satoshi. It's a battle invitation from his former travel companion Iris!!
FOCUS ON THIS:
Satoshi and Iris' emotional reunion...!!
Satoshi has a Dragon match with Iris, the girl who aims to become Dragon Master!!

One day a letter arrives for Satoshi. It's a battle invitation from Iris, the girl who aims to become Dragon Master. He and the others immediately head for Soryu Gum in the Isshu region. Iris can understand how Dragon type Pokémon feel, so she detects Satoshi's Kairyu's feelings. And now a passionate battle between Satoshi and Iris with advancement to the "Pokémon World Championships" Hyper Class on the line begins! 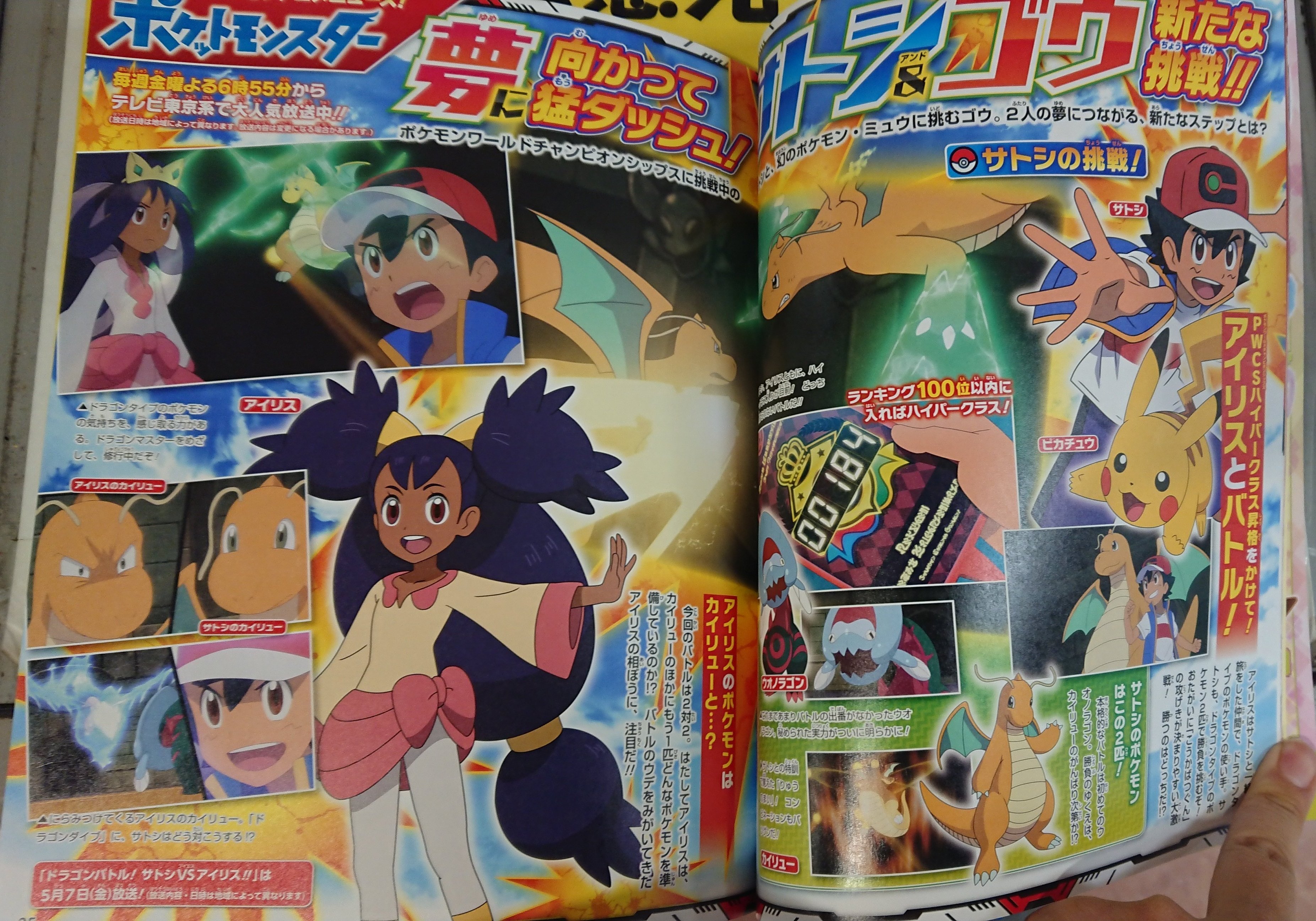 A MAD DASH TOWARDS THEIR DREAMS!! NEW CHALLENGES FOR SATOSHI & GO!!
Satoshi is in the middle of challenging the Pokémon World Championships, and Go challenges the Mythical Pokémon Mew. What are the new steps connected to their dreams these two will take?

SATOSHI'S CHALLENGE:
A BATTLE AGAINST IRIS, WITH ADVANCEMENT TO THE PWCS HYPER CLASS ON THE LINE!
Iris is one of Satoshi's former travel companions and uses Dragon type Pokémon. Satoshi takes her on using two Dragon type Pokémon himself as well! This is a super fierce battle where landing "super effective" attacks will be really easy! Who will win?!

IF YOU ARE WITHIN THE TOP 100 IN THE RANKING, YOU'RE HYPER CLASS!
(cut-off blurb)

SATOSHI'S POKÉMON ARE THESE TWO!
This is Uonoragon's first time battling for real! Will the outcome depend on Kairyu's endurance?!
UONORAGON: It has never really been Uonoragon's turn to battle before now. Now it will finally be made clear what kind of prowess it hides!
KAIRYU: It has learned "Dragon Dance" through its training with Satoshi! Their teamwork is perfect as well!

IRIS' POKÉMON ARE KAIRYU AND...?
This battle is going to be 2 on 2. Which Pokémon has Iris prepared in addition to her Kairyu?! Keep an eye on Iris' partner, who has been polishing up its battling skills!!

Hmmm. Hyper class on the line. I am excited
Eevee is the best

BOY it's finally happening! I would prefer if the battle was a 3v3 but oh well. Very happy for Iris' return and really looking forward to the Fraxure/Haxorus accompanying her
K

I think she still has Axew

Katiegross said:
I think she still has Axew
Click to expand...

Nah I dont.
Eevee is the best

Katiegross said:
I think she still has Axew
Click to expand...

Pokemon Salisbury Steak Bread is switching its design to this one: 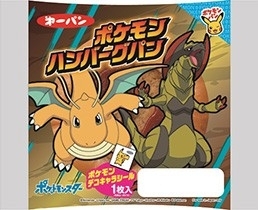 So yeah, I think someone's evolved in the meantime.

Looking forward this episode. Bonus points if Axew evolved all the way. Will be interesting to see if she has Garchomp as well already or if she got something new (like Dragapult).
Goh Club Member. Are you a Goh fan? Come visit us!

Dephender said:
Pokemon Salisbury Steak Bread is switching its design to this one:

So yeah, I think someone's evolved in the meantime.
Click to expand...

Yes please. Axew not evolving in BW made sense but not this time.

"I don't care if no one likes me. I wasn't created in this world to entertain everyone."
|MyAnimeList|​

So hyper class is on the line.

Ash just getting in his current class and now possibly jumping forward AGAIN this episode is pretty funny but it's been talked to death about the rushed nature of his goal at this point so I'll leave it at that. I hope he loses in that case since he just had a big victory with Sir Fetched and Dragonite could use the growth anyway from a loss.

Very excited for this episode, the month wait will be a long one
;254;

Why the hyper class already? It this like too soon?
Eevee is the best
L

Dephender said:
Pokemon Salisbury Steak Bread is switching its design to this one:

So yeah, I think someone's evolved in the meantime.
Click to expand...

Or it could just be Drayden's Haxorus, considering as per the summary Ash is going to Soryu/Opelucid Gym in Isshu/Unova to meet and challenge Iris.

Basically, Iris has done a Flint and I reckon the training trip is an excuse for her Axew to be fully evolved. The part saying 'wielding the new powers she and her partner pokemon now have' makes me feel like Axew has finally achieved its dream .
B

I wonder how much of Yuuki’s words are fluff and hype versus genuine feelings. She is an actual Pokémon fan herself so I can’t discount her summary. Once again another statement regarding Iris’s growth as a trainer. One episode was expected but possible continued appearances would be great if something akin to Saito or Kibana.

Ash losing could actually mean another appearance for iris tho. Since from the summary the episode sounds very self contained, iris might just be a one and done.

Wonder if we'll get to see Iris' Gible. If Axew indeed evolved all the way to Haxorus, it will be like May's Bulbasaur. We'll never get to see it as a Fraxure.
IcySealeo "I don't care if no one likes me. I wasn't created in this world to entertain everyone."
|MyAnimeList|​

He has spent one year in the Super Class.
Eevee is the best

Eh they’ve shown they don’t give a damn about the super class anyways, so i already assumed he was 1 battle, or at most 2, away from hyper the moment he reached the 100s.

KenzeyEevee said:
He has spent one year in the Super Class.
Click to expand...

Seriously? Okay I guess the number placements is what he jumped quickly through but the class stayed the same all that time lol
;254;