Night Of The Living Tuesday 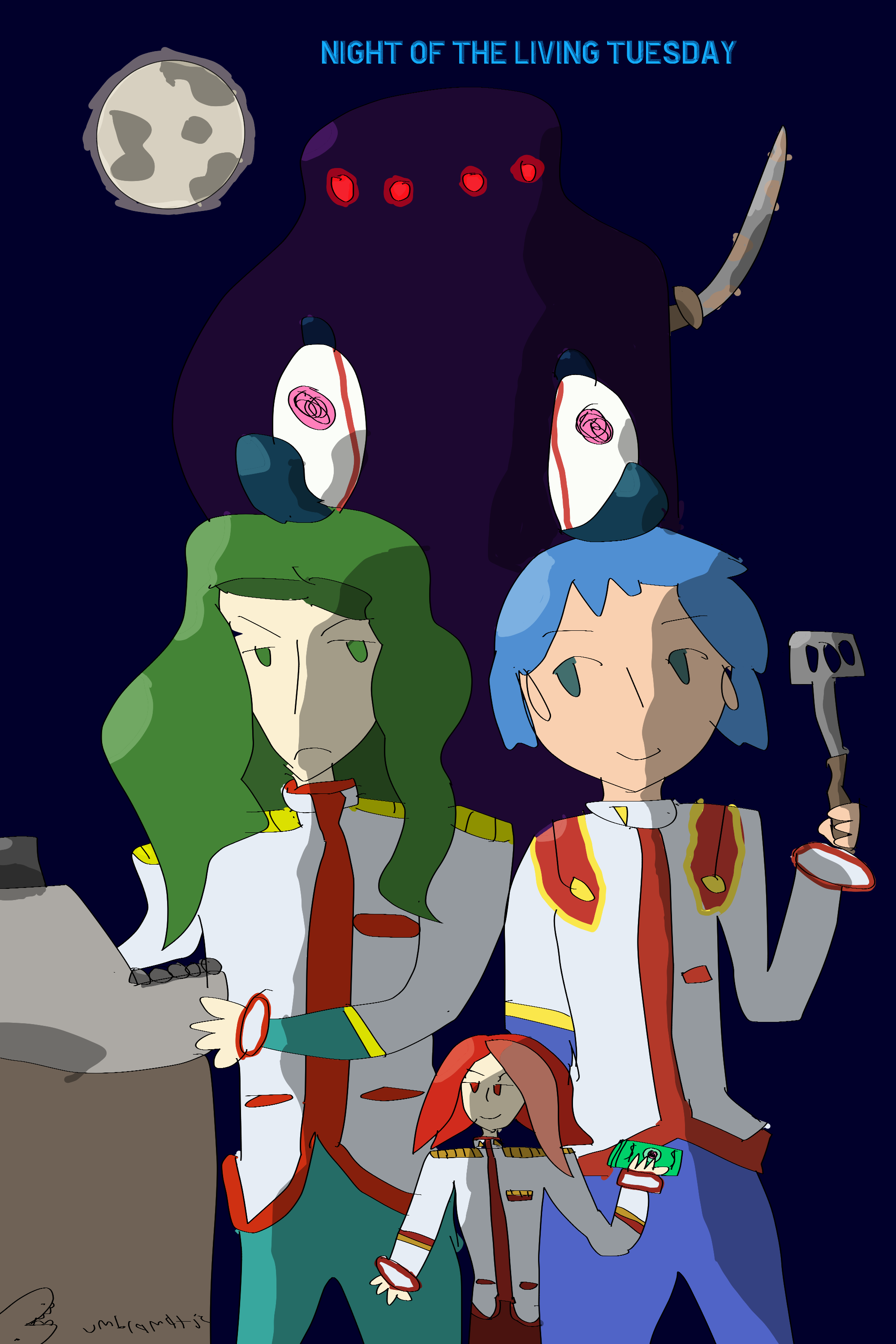 It was evening at Ohtori Academy. The setting sun's rays dappled upon Student Council Burger, the campus' premiere restaurant. A green haired, slender young man excitedly approached the doorway from the inside and changed the sign from "open" to "closed."

It was then he noticed another student standing at the door.

"Saionji is the restaurant open?"

The student glanced over, then continued. "I want an Ohtori burger deluxe and double smashed egg fries."

The other student frowned. "Well fine, if you don't want my money..."

"Did you say money?"

"Are you saying if this venture stayed open later you'd give us more funds for the student council?"

The student smiled and nodded as he pulled out money. More students came to join him. The redhead smiled back, pulled out a katana, and sliced the "closed" sign in half.

"Ladiies, gentleman, nonbinary fellows, welcome to the night shift. From now on Student Council Burger is open 24 hours a day."

Saionji's eyes widened in horror. "What? No, Touga, you can-"

He was interrupted by the other students barging in the restaurant eagerly. There was the click of a stopwatch as a blue-haired, wide-eyed boy approached from further inside, eyes sparkling. "Wonderful! We can do so much for the Student Council this way!"

And he strode off into the sunset.

"Isn't this great Saionji?" said Miki. "Just you and me together for hours and hours and then the sun will come up and we'll have help[ed the student council so much!" He clicked his stopwatch. "Are you ready to do this Saionji?"

They took their places, Saionji at the counter and Miki in the kitchen. Saionji produced a wooden sword, handed it to the nearest customer, and gestured to his chest.

"Please stab me as hard as you can."

"SAIONJI I CUT MYSELF ON MY SWORD! At night!"

Not even by plugging his ears could Saionji drown it all out. Now Miiki was - he was marching around the counter in a circle, chanting "night night night" over and over to the tune of... Never Gonna Give You Up? That song was like ten years old. Weirdo.What had gotten into him? He needed a distraction.

"Miki! Stop your prattling and get rid of this!"

He hurled a bag of garbage toward Miki, which he caught.

"Oh! Good idea! I can take out the trash at night too!" said Miki.

He approached the door and then promptly froze.

Saionji sighed. "Where else would it be?"

"...Are you sure you don't want to do it? It's unusually dark out tonight."

Saionji smirked. "How unbecoming of you. Your sister certainly wouldn't approve."

Miki scowled. "...Fine." He lifted the bag over his head.

"FOR THE WORLD REVOLUTION! AND MY SISTER!"

And he barged out the door.

For the next several seconds Saionji heard loud screaming from outside. Then Miki barged back in and started heaving breaths like he had almost drowned before standing straight and clicking his stopwatch like nothing had happened.

"So you're not really afraid?"

"You're braver than I am. Especially after..." He shuddered.

"After what?" Miki said, eyes widening.

"You haven't heard? They've been gossiping about it for weeks!" said Saonji, throwing up his hands.

"I haven't! Gossiping about what?"

"I shouldn't tell you. It'll RUIN the night shift for you," Saionji said with a grin.

"You mean... You've never heard the story of the Shambling Duelist?"

Saonji sighed. "...Alright, the Shambling Duelist. But most people call him-" he screamed, eliciting several odd looks from the patrons - "because that's all they have time for before he robs them of their manhood!"

"W-what is the story of this fearsome duelist?"

"Years ago at this very academy, the Shambling Duelist used to be a Student Council member just like you, only CLUMSIER. And then, one night, during a climactic duel, it happened..."

"He forgot his Rose Seal?"

"He forgot to turri on the Dueling Arena?"

"He learned to respect women?"

"Of course not! His opponent cut off his hand!"

"And then he replaced his hand with a rusty sword! And then, he got run over by a runaway elephant! And then at his funeral they expelled him! So now every... What day is it?"

"Every Tuesday night, his ghost returns to Ohtori to destroy the patriarchy!"

"There are three signs the Shambling Duelist has returned to Ohtori. First, the lights will flicker on and off. Next -"

A student approached the counter. "Hey can I have some ketchup?"

"Oh, sure," said Saionji, handing the student their ketchup. "NEXT, the phone will ring, and there will be no one there!"

At this point Miki was nervously biting his fingernails.

"The final sign is the Shambling Duelist showing up in front of this very restaurant, atop the ghost of the elephant that trampled him! Then he gets off and crosses the street without looking both ways because he's already dead! Then he taps on the window with his rusty sword hand..."

"He opens the door..." he leaned in very close to Miki. "He slowly approaches the counter... And you know what he does next?"

Saionji suddenly appeared behind Miki. "He ROBS YOU OF YOUR MANHOOD."

It was then Miki started screaming.

...And screaming and screaming and goodness he wouldn't stop screaming. Saionji just laughed at it for a while but once he stopped laughing and Miki was STILL screaming he realized he should probably do something maybe.

"Of course not! I just exaggerated an old schoolyard rumor. It's all baloney."

Hours later, in the dark of the night, Saionji was reading a book, and by that I mean writing in his exchange diary, when something dripped on his head.

The drip was accompanied by strange noises.

"This is wonderful Saionji!" said a voice.

Saionji screamed and whipped toward the source of the voice to find Miki cleaning the ceiling with suction cups.

"I never have time to clean the ceiling during the day!"

Saionji turned back to his post and sighed. "Why did Touga even bother opening this place 24/7? No one wants an Ohtori burger at 3AM!"

It was dark in Nanami's room. She was sleeping soundly. Then her alarm clock rang and she bolted upright.

She pulled an Ohtori Burger from an expensive minifridge next to her bed, fought off intrusive thoughts about cannibalism, and chowed down.

"I mean look around!" Saionji said. "This place is deserted!"

It was then the lights started flickering on and off. Saionji rolled his eyes.

"Thank you! But good what?" said Miki, now on the ground.

"The lights, you're flickering the lights, just like I sai-"

He looked over to the nearest light switch and to his horror saw it wasn't moving even as the lights changed. Miki looked too, a puzzled expression on his face.

"How are you doing that, Saionji?"

"It's not me! It must be- must be a power surge through campus-"

It was then the phone at the desk started ringing. With dread, Saionji picked it up. "H-Hello?"

All he heard from the other side was strange moans. Miki giggled.

"Good one yourself Saionji!"

"Your fable said the phone would ring and there'd be no one there! So you're making the phone ring somehow."

"Miki I'm not doing this!" Saionji slammed the phone down. "Okay breathe, breathe... what was the stupid story, it had the lights -" they flickered, "the phone-" it rang, "and-" He looked out a side window and gasped.

"And SHADOW GIRLS WILL PUT ON ALLEGORICAL PLAYS!"

He paused. "Oh, wait, they always do that. What WAS that third thing?"

He heard a trumpeting and froze, slowly turning toward the entrance.

There, outside the glass doors, wass an elephant.

The elephant stepped aside to reveal a shadowy figure, nebulous, with four glowing red eyes.

"Hey, that must be the elephant's handler!"

It was at that point Saionji started screaming.

"No, no, I'm honored! You dressed up as this mythical duelist so you could beat me in a duel!"

"First off, I could beat you in a duel anyway. Second off how could that be me when I'm right here?!"

By then the Shambling Duelist had opened the door.

The Shambling duelist approached the counter.

"M-Miki, deep down, I always kinda felt I should respect women..."

"Saionji I used your katana to pick my teeth."

"YOU!" said the Shambling Duelist, in a booming voice that sounded like multiple. "I CHALLENGE YOU TO A DUEL!"

Saionji hastily got up and drew his sword. Miki stood back to watch.

The Shambling.Duellist laughed a booming laugh and tossed its shawl aside, revealing a pink haired, fair-skinned girl and a purple-haired dark-skinned girl, laughing in unison.

"We overheard your story when we were here earlier and decided to pull a prank," said Utena.

"IIt was my idea," said Anthy with a giggle.

"Well, at the very least, you sure fooled us!" said Miki.

"So that was YOU the whole time?" said Saionji. "With the elephant and the phone calls and the lights?"

Utena raised an eyebrow. "What lights?"

The lights flickered again and everyone turned to see a tiny monkey flipping the light switch.

"Chuchu!" everyone said in unison in mock scolding.

Chuchu winked and turned off the lights.

The whole reason this ABOMINATION exists is because I've been rewatching Utena with a bunch of people who have never seen it before. The watch parties were usually on Tuesdays, I kept making jokes about the Tuesday Night line from the original Spongebob episode, and that snowballed into... This. Happy Halloween.
Last edited: Oct 31, 2020 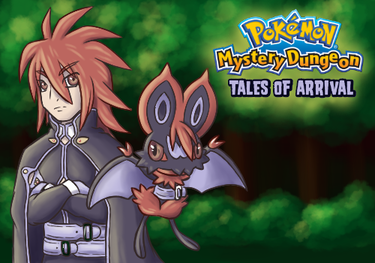