Not For the Weak Hearted...(First RMT here @ Serebii) 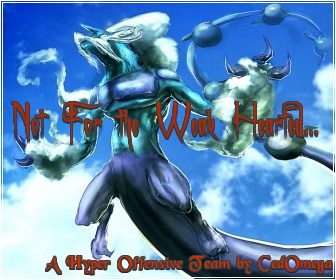 Now that I've finally gotten my account activated, I'd like to start off my first post here with my more successful team featuring the infamous Thundurus-T. Like many competitive battlers, I fancy using Hyper Offensive teams to wipe the floor as quickly as possible. That said, the balance of the team is often shifted when one of my Pokemon have been taken down. Before I begin to ramble, here is the debut of my newest team, "Not For the Weak Hearted..."

So we begin with Deoxys-D, one of the bulkiest setters in the current OU meta. Complementing its bulk is Taunt, as it stops common setters like Forretress, Ferrothorn and Skarmory in their tracks. In addition to this, Magic Coat can both bounce back opposing hazards and status predicted T-wave, Toxic, and Will-o-Wisp users. Stealth Rock is the main set up hazards, as the team seldom depends solely on Spikes at all in most cases.

Now, we come to second in command. When Terrakion comes out, everyone holds their breath in contempt. Its unpredictability makes it very easy to come in on something vulnerable to is Scarf using brothren and scare swithc the opponent while it sets up a Sub, followed by either a direct attack or Swords Dance. With its Sub intact, Terrakion becomes an unbelievable threat to everything. After a few repeated Sub(s), Salac kicks in and increases its Speed, making it even deadlier. Dual STABs are provided by Close Combat + Stone Edge, hitting everything for super effective and neutral damage.

Thundurus-T comes along as the teams main sweeper. The team's objective most of the time is to keep all hazards off the field and to dispose of all Thundurus-T's threats. Anyone familiar with Smogon, it's pretty much the standard Agility set. Ultimately, this set is Thundurus-T's most deadly. It makes the best of its limited movepool while scoring sweeps throught the game after setting up. Thunderbolt + HiddenPower(Ice) form somewhat of a pseudo-BoltBeam. Focus Blast is there for coverage against Steel types, though I rarely ever find a situation where I've needed to use it.

Again, another standard set. Scarfed Jirachi utilizes Serene Grace with STAB Iron Head on steroids. Like other scarf users, Jirachi doesn't have to worry about being outpaced by faster threats outside of Base 100 Speed and slowwer Pokemon. Fire Punch and Ice Punch are used only as coverage move. Fire Punch deals with opposing Grass, Ice and Steel Pokemon, while Ice Punch handles those pesky Dragons like +1 DD Dragonite and Haxorus, Scarfed Salamence & non-scarf Garchomp. Ice Punch also helps in dealing with the occasional Landorus-T and Gliscor threats to the team. U-turn's purpose is more obvious than anything; being used for scouting the opposing team and hitting Alakazam and Lati twin for decent damage. Iron Head spam is used to tear down the opponent as much as possible.

The highly underestimated, very deadly Flame Charge Heatran. Often used as the lead when I suspect Scizor threats to be the opponent's team lead, Heatran sets up Flame Charge and goes to work. Fire Blast is used more often that Flamethower because I don't really care for being inaccurate much. Though it has shady accuracy, it hardly ever misses, meaning Heatran can rack up a few KOs before [maybe] being revenged the following turn. Earth Power and HiddenPower(Ice) are used for better coverage against its more common switch ins, like opposing Heatran and Dragons. When Heatran manages to keep Air Balloon in tact, he stays a solid threat.

Last, we come to the team's final special sweeper. Again, standard Specs Latios set here. Draco Meteor spam is its most common threat to any team. Psyshock is used for bulky walls like Eviolite Chansey and Blissey, along side the efforts of Trick'ing their source of Leftovers[Blissey] and bulkiness[Chansey] away. Surf is for coverage against such threats as Roar+Protect Heatran with FireBlast and Earth Power. Sp. Defensive Jirachi also have to fear Latios, as being locked into using one move can be very annoying for them. It's only real threat is Scizor, which as easily handled by the Heatran switch in.


So, to close this RMT up, I want to thank everyone who took the time to read my team's description. Feel free to use the team as you please, though I appreciate credit for its use. The team was really fun to use and has brought me much success. Enjoy everyone!
​
​
When in doubt, fight harder...Never accept defeat as temporary satisfaction...

Feel the Heat
Check out my latest RMT

nice team, nice to see something thats not rain, also hyper offensive is 5 physical or special sweepers, your team is more heavy offensive, which is basically the same thing without the restriction

As for threats i see

Landorus i- Landorus doesnt have a lot of trouble coming in and sweep with ease, OHKOing everyone besides deoxys def and latios, whos a 2hko (hp ice hits for around 70%). Latios is the best option, but if its weakened its game over if its useing rock polish, tho some now favor u turn, which is equally as threatening.

Tyrannitar- Choice tyranitar is a big threat as nothing can easily switch in, in fear of superpower, stone edge, or crunch, while latios and deoxys def give it an easy switch in. Scarfed tyrannitar is as threatening as it outpaces everyone, notably terrakion, and still has a lot of KO potential

Thunderus therian- He runs the same as landorus, same check on your team, easy set up and sweep potential. Latios is the best answer, while terrakion and heatran can hope for a miss with focus blast

Dragonite- He can set up easily on deoxys def and threaten your whole team. While jirachi outpaces him, he cant OHKO because of multiscale, same for heatran, tho if its balloon has been popped priory to the set up, and multi scales are still there its game over

Kyurem black- The best wall breaker in OU, his sub mixed set is devastating here as it can sub on deoxys or a switch and threaten super effective moves on everyone depending on its set, tho standard is ice beam, fusion bolt, and dragon claw which is still threatening. Terrakion can handle it if it doesnt sub or have earth power, but dragon claw can KO after cc, latios is the same. Jirachi can force it out with iron head, but cant take repeated hits.

Kyurem- Sub roost kyurem runs similar to black, but earth power and ice beam threaten everyone. He is handled basically the same as black, latios, heatran with its balloon, or terrakion.

Mamoswine- Arguable the biggest threat as nothing can switch in on it as he threatens to OHKO everything with earthquake and icicle spear. Ice shard lets him revenge thunderus if it boost, and superpower gets around heatrans balloon. Something will probably need to be saced or predict its move, however, he has trouble coming in as terrakion and rachi force him right out

Celebi- celebi looks threatening to the team as he stops thunderus`s sweep, as it cant be OHKOed and can KO back with HP ice, earth power handles rachi and heatran, while terrakion fears giga drain. Any non-bulky set, latios can KO with speced draco meteor and if heatran has its balloon he can force it out.

For suggestions i would say try latias>latios as it provides more bulk and choice band scizor>jirachi as the priority will help handle dd pokes, jyurem, and mamoswine.

This is hyper offense and as I have said on almost every hyper offense team I have looked at lately, the point of Ho is to minimize prediction. I realize you have ways to get around your choice items (u turn and trick) but you still have 2 choice items that give you a lot more trouble because you have to predict. I'm going to second McDanger's suggestion about adding a latias and I am going to go a step farther and suggest this set;

So this is a pretty standard calm mind Latias. You could put in some sp atk Ev's into def or hp to tank hit's better since you will be boosting with calm mind anyways. Leftovers vs life orb is survivability vs damage. Recover and calm mind let you set up against a lot of special attackers. Dragon pulse is your primary stab while hp fire can give you coverage psyshock beats certain pokemon such as calm minders

If this is being played on PS, DeoD was announced banned.
In order to understand my train of thoughts,
you'll have to put yourself in my position. You can't expect me to think like you because my life ain't like yours; You know what I'm sayin?

@Mcdanger & Dragonicwar: I've found the change of Latios>Latias helped fend off alot of threats to the team. Thanks for the suggestions!

P.s. Mcdanger: For Kyurem-B, Mamoswine, Kyurem, & +1 DD Dragonite, I often use Jirachi to spam IronHead enough to weaken them to a point where something else can deal with it. I do agree that Scizor helped with them. I tried out SD + Roost + LO Scizor and it did splendid work. Thanks for your suggestion.

To reply to your comment, Azeem40, I use this team against other standard Smogon Facebook battlers.
​
When in doubt, fight harder...Never accept defeat as temporary satisfaction...