I hope you didn't just jinx yourself!

Tornadus is still being a mild pain. Am approaching 5,900 SRs.

I am about to attempt another shiny hunt which next up on my mm list is shiny oddish so once I finish hatching the rest of these goldeen eggs I will start breeding :3

good luck to all shinies obtained and congrats all the new shinies since my last post and hopefully there not stubborn like cyberra's dialga >.> I would of gone mad...

Just finished hatching all 540 eggs I collected and got 2 shiny gastly both female one -ATK the other -HP, I will try for a Male another time but onto my next hunt which will be a porygon which I'll evolve into porygon-z, I just got a 6iv porygon on my 4th egg which is by far the quickest I've gotten a 6iv mon to start a MM hunt so I'll start collecting eggs tomorrow morning will collect about 300ish this time since after box 6 of the gastly eggs I didn't get a shiny and I had 18 boxes full so the last 12 boxes had no shiny
Good Luck to those still hunting

Been hunting for a shiny Mewtwo for over 6 months now. Still nothing.
So I decided to take a break and breed a Timid Perfect 5IV shiny Ghastly. After 15 eggs I allready have my perfect Ghastly!
I guess I'll get back to Mewtwo then, sigh....

I got sent a shiny gulpin over Wondertrade the other day


How do people think Shinys will look in the alolan forms
MEGANIUM​
"The Aroma that arises from its petals contains a substance that calms aggressive feelings" ​
;154;​
Friend code 3ds: 2492 -5243 -1059 Add me for friend zone and inbox me yours once done

Got Uxie at just about 4k. Bold sync worked and she has 3 perfect IVs, including SpATK yay!

Next project I am starting already is Spiritomb. Reason is because I am a fire/medic in central east coast FL, and am currently on duty (for at least 48 hours, maybe more), and Spiritomb looks quite a bit hurricane-y.
Default Signature: I need to make a new one! Mebbe a banner? Too many shinies to properly post. /sad face on

KatieIsGreen said:
I got sent a shiny gulpin over Wondertrade the other day


How do people think Shinys will look in the alolan forms
Click to expand...

not sure but seriously I might be crazy enough not knowing what the shiny looks like do a badge quest moon XD it may be fun I never did a badge quest before and I think I might give it a whirl...

anyway still emptying these boxes of goldeens grrr....I will start my shiny hunt soon though I got like two more boxes to go to get rid of the goldeens and then start breeding oddish

good luck to all that is hunting and congats to all the new shiny that were posted found :3

RedJirachi said:
Does anyone have a favored shiny Pokemon that, color wise, isn't much different from its normal form? I like the more white-colored Glaceon. It really exentuate's its nature as an Ice type
Click to expand...

Regice. Try telling that bugger shiny from the regular without seeing sparkles.

At 6,400 SRs, tornadus continues to annoy me. I took a break and tried to dexnav klefki, but dexnav apparently hates me, too.

Congratulations to everyone else!

So I recently collected another 400 eggs from my hunt.
I was near the end of this group when one shined.

A second shiny Fletchling.
Time to check its IVs.
First- DARN. Big Pecks ability.... Seriously? I wanted Gale Wings.
Time to keep hatching, despite whatever its IVs are...
IV spread is 31/31/31/x/31/x, with a low Speed IV. A bit disappointed, but not too much considering I already knew its ability.

RedJirachi said:
Does anyone have a favored shiny Pokemon that, color wise, isn't much different from its normal form? I like the more white-colored Glaceon. It really exentuate's its nature as an Ice type
Click to expand...

That would be kecleon for me, its shiny form has a minor change in its design which is its belly colour turning in blue but heck I am kecleon fan so I found its shiny form fantastic too.

Interested in gen7 Multi battles and Battle Royales?
Join our DiscordChannel and MultiBattleFanClub for some jolly coop!
​

Congrats all are your recent shinies!
I collected 300 porygon eggs yesterday and now I'm about to start hatching them, hopefully one shines out of these
GL to all those hunting especially those going for shiny legends I know they can be a pain I've only SR one myself which was thundurus took nearly 2k resets

Little Tricera hatched in like 23 eggs. What a luck I have, I decided to stop my beldum hunt and went to breed Aron..
its Stats are nice too but its not perfect.

But hey Sun and Moon is on the way so I dont mind this at all, plus I am just digging the Premier ball plus Female combo on Shiny aron.. the colour scheme is just perfect.

Interested in gen7 Multi battles and Battle Royales?
Join our DiscordChannel and MultiBattleFanClub for some jolly coop!
​
C

Congrats to Team Volt Grunt on Honedge, scififan21 on Bulbasaur, TheMaster327 on Kabuto, 955561976 on Grimer, scififan21 on Chimchar, Charizard_Rulez84 on Charmander, wobbanut on Garbodor, FairyWitch on Goldeen, oarfish on Heracross and Aerodactyl, Conquering Storm on Roselia and Fletchling, RedJirachi on Registeel, maldoror on Misdreavus and Tentacool and Shroomish, Conquering Storm on Vulpix, Charizard_Rulez84 on Gastly, TheMaster327 on Psyduck, AmethystLeslie on Porygon, LilyValley on Eevee, Charizard_Rulez84 on Gastly, RightClick on Rotom, Laurelai on Uxie, oarfish on Fletchling, Azulart on the haul, and everyone else on your shinies!


RedJirachi said:
Has anyone her got a favorite or one of their favorite shiny? I'm quite partial to shiny Porygon, and generally like golden shinies such as Steelix
Click to expand...

Mine being Umbreon, I certainly do! It was my first hunted shiny and my second shiny overall. And I’ve gotten a bunch of other favorite shinies since then.

Not only is it my 4th, which is SUPER unnecessary, it’s also around a 10% appearance rate, so I wasn’t even likely to get it…This one is Female and Adamant and I’ll find out her IVs later…UGHHHH this could have been a Vulpix and I could be onto a different hunt -_- Meanwhile, my other hunts are also over odds so I'm hoping they'll at least give me something I want soon.

Nice shiny Aron Azulart love those red eyes! and even though it's your 4th Cpchris altaria shiny is cool
I hatched all 300 porygon eggs and got no shiny I'm gonna hold off for now just cuz I hate seeing same mon pop up on my screen 300+ times lol so I'll try another time now I'm gonna try for a shiny sableye I just caught one in friend safari with prankster and in a dusk ball so I'm gonna try and breed for a 6iv now GL to those wanting something nice to shine!

Azulart said:
That would be kecleon for me, its shiny form has a minor change in its design which is its belly colour turning in blue but heck I am kecleon fan so I found its shiny form fantastic too.

Currently for shiny Beldum, good luck everyone !
Click to expand...

I'd like it better if there wasn't already a better looking alternate coloration with the purple Kecleon. And before you say anything, it appeared in the Johto anime so I don't know why they didn't design it to have that coloration as a shiny
Favorite Generation: V
Favorite Pokemon per generation: Mewtwo, Jirachi, Giratina, Ferrothorn, Klefki, Mimikyu
Favorite type: Water
Favorite team: Plasma
Most recent shiny: Bulbasaur(Pokemon GO)
Recent GO legendary: Kyurem
Switch Friend Code: SW-1509-3691-0315
GO: Redjirachi93, 3853 8382 6220

oh my God. Finally a shiny torchic hatched after 922 eggs. Literally the last egg before I was going to go to bed.
Adamant, speedboost, male, 5 IVs (unfortunately missing Atk).... 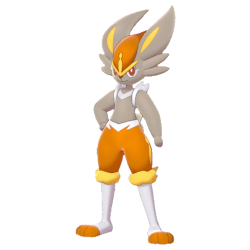 Congrats to all recent Shinies

On september 25th, a shiny Riolu hatched after 270-ish - 290 ish eggs. Male (Nicknamed Connor). Jolly Nature through everstone with perfect IV's in DEF, Sp. ATK and Speed with the ability Inner Focus while I was breeding for it to have it's hidden ability prankster (Because it would become Justified if it evolved into Lucario)

This past week I hatched 4 shiny Pokémon.

The first Magikarp hatched after a mere 28 eggs. It's female (Nicknamed Jasper, a cookie for anyone getting the reference), Adamant Nature through everstone with 5 perfect IV's (Just missing out on HP) with the Swift Swim ability.

The first Helioptile hatched after 21 eggs. It's female (Nicknamed Kibi, after an area in Japan where I got badly sunburned last May and because shiny Helioptile looks sunburned). Timid nature through everstone with 4 perfect IV's (ATK, DEF, Sp. ATK and Sp. DEF) with the ability Sand Veil.

The second Helioptile hatched 6 eggs after Kibi. It's also female (Nicknamed Shiki, after the Japanese city of Kurashiki). Timid nature through everstone with 4 perfect IV's (HP, ATK, DEF and Sp. ATK) with the ability Sand Veil.

Good luck to all future shinies