So, second Growlithe obtained after a considerably shorter 166 eggs! This one also got Intimidate, like the first, and is 5IV missing Attack (which is still Very Good). Think this one will still be the Arcanine.

Edit: Just got a third in the 12 leftover eggs I had. 5IV missing Speed, so will be Wonder Traded.

Edit2: Well this was bound to happen at some point. Shiny Chansey after 27 SOS calls!

Actually got its HA of Healer as well. Relaxed nature with 3IVs and a No Good Sp. Def lol.
Last edited: Aug 24, 2018
Current Hunt for Shiny Living Dex

Congrats to all on your recent shinies and good luck in your ongoing hunts!!

I haven't posted here in ages, but the past week my luck has been insane so I had to share. Last Saturday, I caught a shiny nighttime Lycanroc, followed by Mudbray on Sunday, Elekid on Monday, Chansey (via SOS training) and Charjabug on Tuesday, and yesterday I got Dedenne (via SOS) and Turtonator (via MM). I am particularly happy with the Turtonator, as that was a fairly long MM hunt broken up by the above RE hunts.
Soulsilver Badge Quest

First Poliwag shows up after only 55 SOS calls! Ended up Brave and very close to 5IV missing Speed. Time to catch another two! (Will return to Politoed later on)

Started a new game of X yesterday, and I was just going through Reflection Cave for the story, when, to my surprise, a SHINY FREAKING CHINGLING pops up! Full odds, completely random! I'm just flabbergasted at my luck!
NEW!!! FC: 2767-4780-6652
IGN: varies between games

So I got the second Poliwag tonight after 704 SOS calls. Certainly didn't take after the quick first one! This one is Adamant 4IV missing Sp. Atk and Defense, a likely candidate for Poliwrath.

Edit: Third shiny Poliwag after only 54 SOS calls! Quickest of the three! 4IV Adamant missing Defense and Speed, so this one will be the Poliwhirl, I think.

It's kind of strange to make a post on here - it has been so long since the last time I posted, and since the last time I did any proper shiny hunting. It's really heartwarming to see that there is still a community here, and that the same old thread is still going strong! I also see quite a few familiar names, wouldn't have thought but there are a lot of dedicated people! Congrats to everyone on their most recent shinies

I remember posting here regularly back in 2014 when I started hunting properly - I begun my first ever and still only badge quest and managed to acquire the five first badges that I've got in my signature now.

Since then I have had a break from hunting, though I have still certainly played a lot of pokemon - the sun and moon and ultra versions particularly! But I haven't been purposefully hunting, though I have been lucky here and there. I hatched a random shiny Rowlet when trying to breed a competitive Decidueye, and it appeared after less than 10 eggs (no MM'ing). I also ran into a random shiny Ledyba in HeartGold.

The reason I'm posting though, is that during the last couple of months the urge to hunt has been coming back to me.
To start out easy I began MM'ing for one of the coolest shinies in gen VII in my opinion - Bruxish!
This one showed up after 828 eggs. 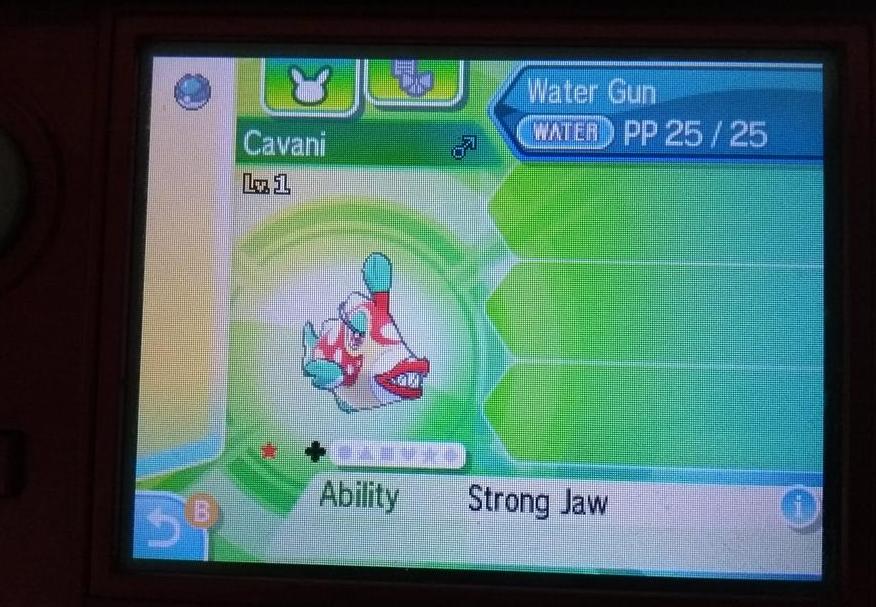 Now I'm trying for a Mareanie, and this hunt has also gone above the odds but it's kind of on hold at the moment.

I also started up my HG BQ again, which has been idle for many years. I'm still in the gamecorner, this time trying for a Dratini after that disastrous Ekans hunt which went above 29,000 seen!
I'm currently at 2000 seen for this cute little dragon snake

I also decided to start a Nuzlocke on my Y cartridge. I had previously begun a playthrough with an all-out shiny golden team consisting of Azumarill, Arcanine, Swablu, Mightyena, Meganium and Meowstic. It was fun to hatch them all but I lost interest in the playthrough. Now I've got my first badge - it's been ages since I've visited the Kalos region and although it's not among my favourites it's still a lot of fun! I'm writing a little silly story to go along with it while tracking my progress - the link to the first chapter is in my signature. Anyway, I was just grinding a little on route five when this pretty thing popped up out of nowhere! 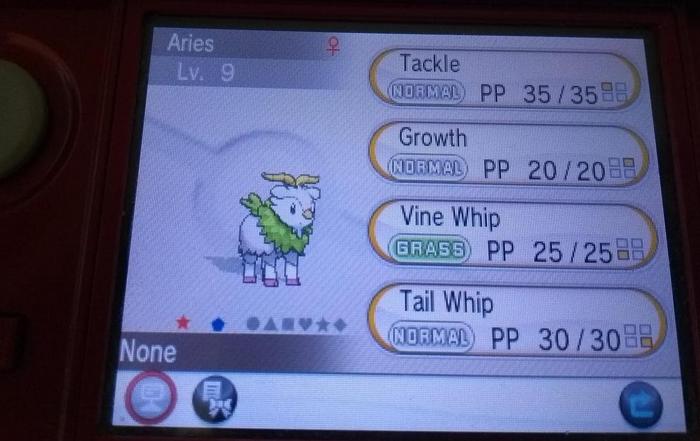 Skiddo is a repeat shiny for me, but I don't mind because it is one of my all-time favourite, and now I can evolve it and have a gogoat too. Also, the previous one was a random encounter in X but I had the shiny charm at that time. This one is full-odds 1/4196.

One of the exceptions to my nuzlocke rules is that if I find a shiny I can add it to the team regardless of whether it was the first pokemon encountered on a route - so this little ram is joining the adventure!

Anyway, that was a pretty long post - I promise the next one won't be nearly as long! It's good to be back. Happy hunting everyone!
Current HG BQ

So I got my first shiny Abra after 323 SOS calls. I used the Attract PP Delaying method of SOS to get it, which I'll explain. Basically the objective is to Mean Look and Attract the caller. So to start, you find an Abra (preferably opposite gender to you, but it can call the opposite gender in) and Mean Look it to trap it. When it calls in an opposite gender to what you'll be chaining with, switch to your LeppaHarvest mon and Bestow/Skill Swap the Abra you'll be Attracting. Next, bring in your False Swiper and bring it to 1HP. After this, switch in your Mean Looker/Attracter and Mean Look/Attract the 1HP Abra (these three steps have to be when two Abra are on the field as Teleport will fail). As the caller is now infatuated, it will be less likely to lose PP because it can't attack 50% of the time, and the rest of the time Teleport fails due to Mean Look. This also gives Harvest a lot longer time to kick in as this is a 50% chance in normal weather. This buys you more than the standard 10 turns of Teleport a non-Attracted Abra would have for Harvest to kick in. When the shiny pops up, Mean Look it immediately as it will Teleport away the instant you KO the caller.

This one ended up Modest (Sync Umbreon did its thing) with 4IVs missing Attack and Defense which are both non-existent anyway.

Edit2: And that makes three after 280 SOS calls

Not a fan of link trading.
E

3080 and counting for Articuno. This would be so much less painful if I didn't have to sit through the gen 1 "new dex entry" screen every time, lol. Having to check the stats doesn't really annoy me.
Guzzlord has stolen my heart. Or eaten it. I'm not sure.
Most recent hunted shiny: 5250 SRs

Adamant sync worked and ended up 4IVs with a very close 5IV with a presumably 29 in HP, missing that and Sp. Atk. That's definitely a Machamp in the making!
Current Hunt for Shiny Living Dex

I'm about to hit double odds for mewtwo. Found it in my first legendary green hole, about two runs after I got that swanna. Been SRing the snot out of it since... Am at 8,040 and counting.

Currently MM'ing for a shiny Phione, I'm at 25 hatched eggs so far, with no luck...

Second Machop didn't take long to show up. Only 21 SOS calls, so only 3IV. Sync failed and ended up Brave. This one got its HA of Steadfast though.

Edit: Third Machop took it's time, but finally shows up after 389 SOS calls!

4IV yes, but failed to top the first one. This one will be a Machoke.
Last edited: Aug 30, 2018
Current Hunt for Shiny Living Dex

Looks like mewtwo has decided to challenge heatran for my longest Gen 7 wormhole hunt. I just hit 10k SRs for the green-tailed nuisance. Heatran took me 10,225 SRs; by tomorrow I'll know if it retains that title or if mewtwo decides to be uber-stubborn.

Hatched a Modest shiny Exeggcute whilst breeding for what would become my newest BRdex entry (and the first to be shiny!). It is now a Lv.100 Exeggutor! No idea how many hatches it was but couldn't of been many at all.
N3DS FC: 2037-1386-8185
US/UM IGN: Jason
Event Trades accepted
Battles (6v6 Battle Spot Singles and Doubles) and all other trades accepted
Time Zone: GMT/UTC

For Trade: Anything off my Google Document

Went to start EV training my Shuckle on Route 1 and found a shiny Bonsly on a SOS chain of 1...

Update: I am on a roll this week, leveling in the Poni Wilds and find a shiny Blissey in an SOS chain of 11.

First of the two Bellsprout to complete the line shows up after 67 eggs! Using the shiny Weepinbell from the SBQ in this game to breed for these.

Mewtwo has definitely decided to be a stubborn bugger. I'm up to 13,300 SRs for his green-tailed arse and counting.

Cyberra said:
Mewtwo has definitely decided to be a stubborn bugger. I'm up to 13,300 SRs for his green-tailed arse and counting.
Click to expand...