Raicario said:
Bummer.
I hope you don't go more than double odds on it. I wouldn't want to be in the room OR your DS if that happened...
Click to expand...

Cyberra said:
Full odds for Gen VII is 1/4,096. I'm already over triple odds for this psycho-cat.
Click to expand...

After becoming unemployed because of a very bad, very not-nice, very not-professional former employer, I have been passing the time breeding for a shiny Porygon in-between not hearing back from companies. All well. Take your little victories where you can. Took about 850 eggs. Casual battler who also moonlights as a Red Mage on a dying MMORPG.

So after a very long 277 eggs, the other Bellsprout required for the line popped out an Egg

Whilst hatching a few boxes of forgotten unhatched eggs I came across not one but TWO shiny Sandshrew! Best thing is these Sandrew were the last I needed to complete Box 1-30 of my Shiny Livingdex (my first fully complete box out of about 9 overall)!
N3DS FC: 2037-1386-8185
US/UM IGN: Jason
Event Trades accepted
Battles (6v6 Battle Spot Singles and Doubles) and all other trades accepted
Time Zone: GMT/UTC

For Trade: Anything off my Google Document
W

I had some shiny luck this week. While doing my horde spams in AlphaSapphire, I got a shiny spoink for the first time. I love the pink pig/grey pearl combo! ^_^ I then switched from Fallarbor to the route heading up to Fortree to start a horde hunt for kecleon, and after two hordes I got my umpteenth shiny wingull. But hey, it was two shinies in three hordes, so not bad.

And in the best news this week, I added another pokemon to my roster of Team Rocket shiny pokemon. I tried SOS hunting for a shiny lickitung in UltraSun, but I got frustrated when help was reaaaallllly slow in coming, so I decided to switch to SOS chaining mareanie again. Shockingly, I found a shiny mareanie pretty quickly, in probably 15 or less calls. So yay, I've added another shiny Team Rocket pokemon to my roster. Pretty soon I'm going to have to devote a whole box to them so I can make sure which ones I still have to get (Arbok, Lickitung, male Wobbuffet, male Woobat, Carnivine, etc.).
New shinies week of 1/13-1/20: Ralts, Clefairy, Slugma (evolved into Magcargo) (Pokemon Go)
New shinies week of 1/20-1/27: Larvitar x2 (evolved one into Tyranitar), Zigzagoon (Pokemon Go)

So I got my first Tentacool after only 59 eggs yesterday. These are hatching Bold, with egg moves Acupressure, Aqua Ring and Muddy Water.

Currently at 290 eggs for the second one.
Current Hunt for Shiny Living Dex

Good luck, everyone. I'm just over 1,000 SRs for Heatran, but to be honest, I don't think I'll get a shiny one by the end of November. I'll probably come back to it later, though
Drastic DS Emulator APK Download for Android and GTA 5 Mobile

Shiny bleeping mewtwo after a total of 17,227 SRs!

Back to eggs for a while. Next target is scyther.

Cyberra said:
Shiny bleeping mewtwo after a total of 17,227 SRs!

Back to eggs for a while. Next target is scyther.
Click to expand...

Raicario said:
Wow............................... I hope you have better luck with the egg hunt. I'm genuinely surprised that you went THAT far over odds! My own Shiny hunts are taking a while, but I would NEVER wish a hunt THAT long on anyone! Still, congrats on Shiny Mewtwo! I've been after one of those since HGSS! Still haven't gotten up the nerve to hunt for it!
Click to expand...

XD You replied to my post just before I edited it... Check again

I've had worse hunts than this mewtwo. That Damn Ledyba in Y (SR at the berry fields, route 7) took me damn near 28,000 resets. And dialga in AS was only just slightly less bad

Second Tentacool after 701 eggs. One of which is now Tentacruel Onwards to Geodude!

Shiny Cresselia in under 50 SRs this morning! 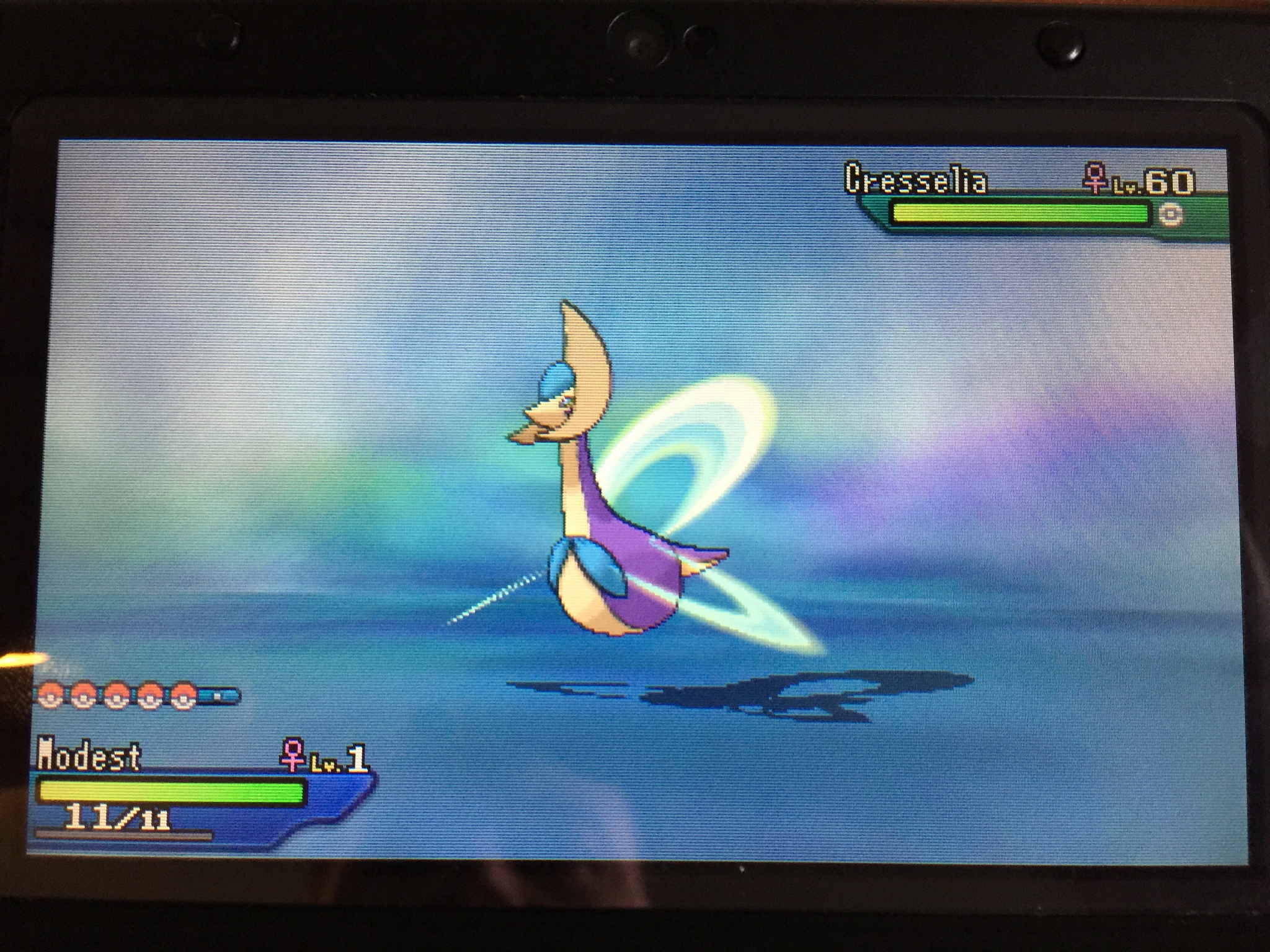 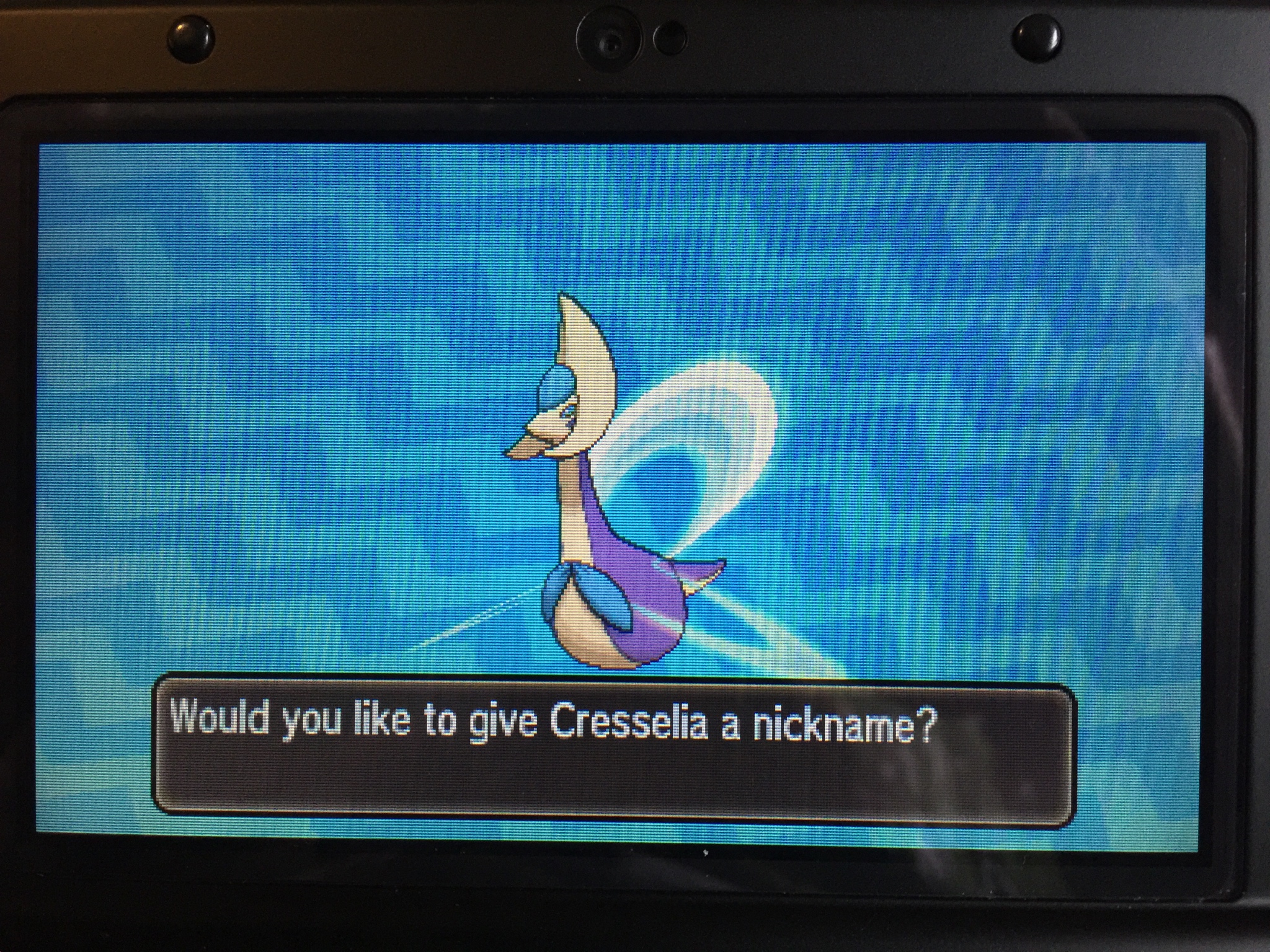 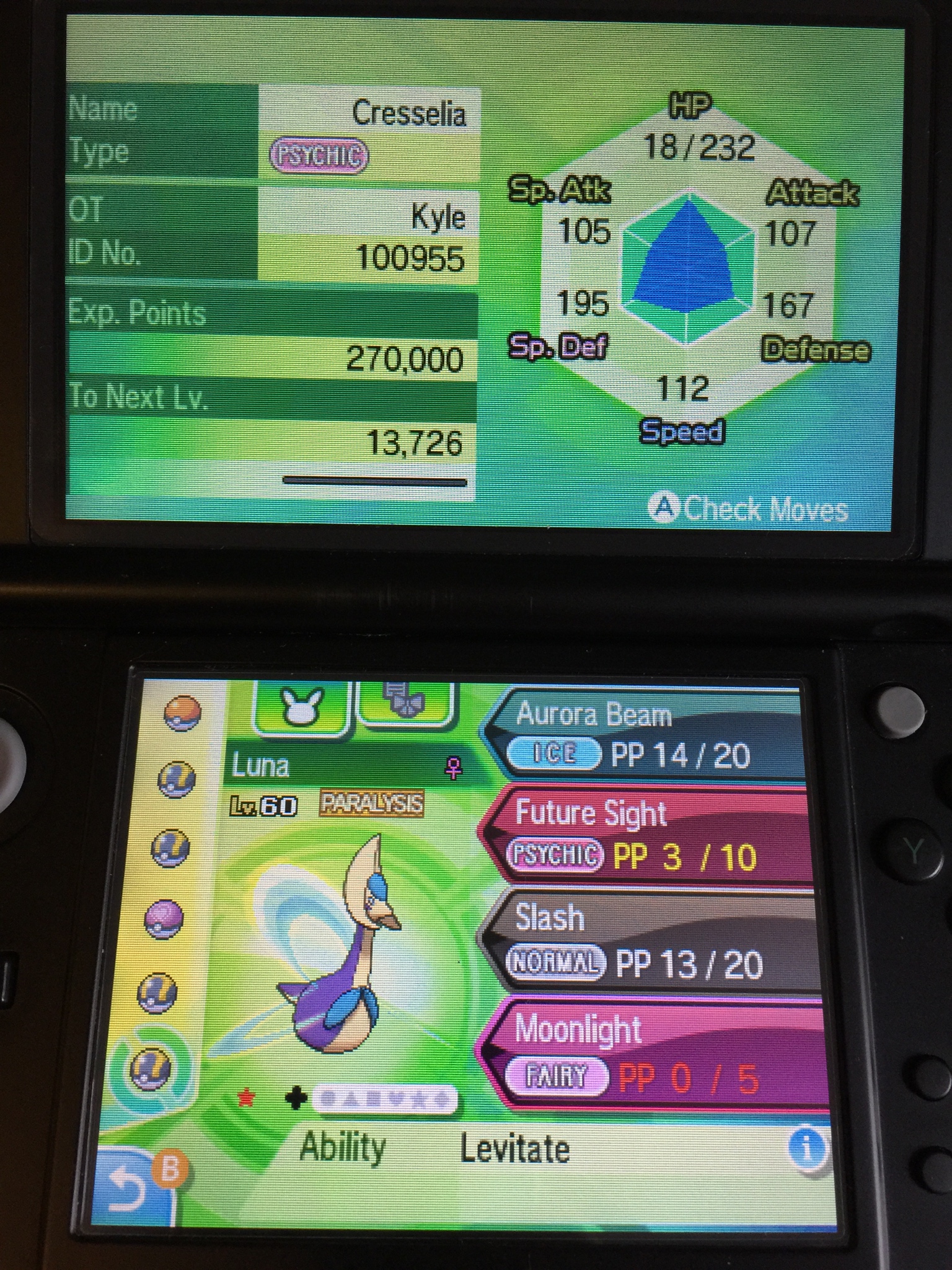 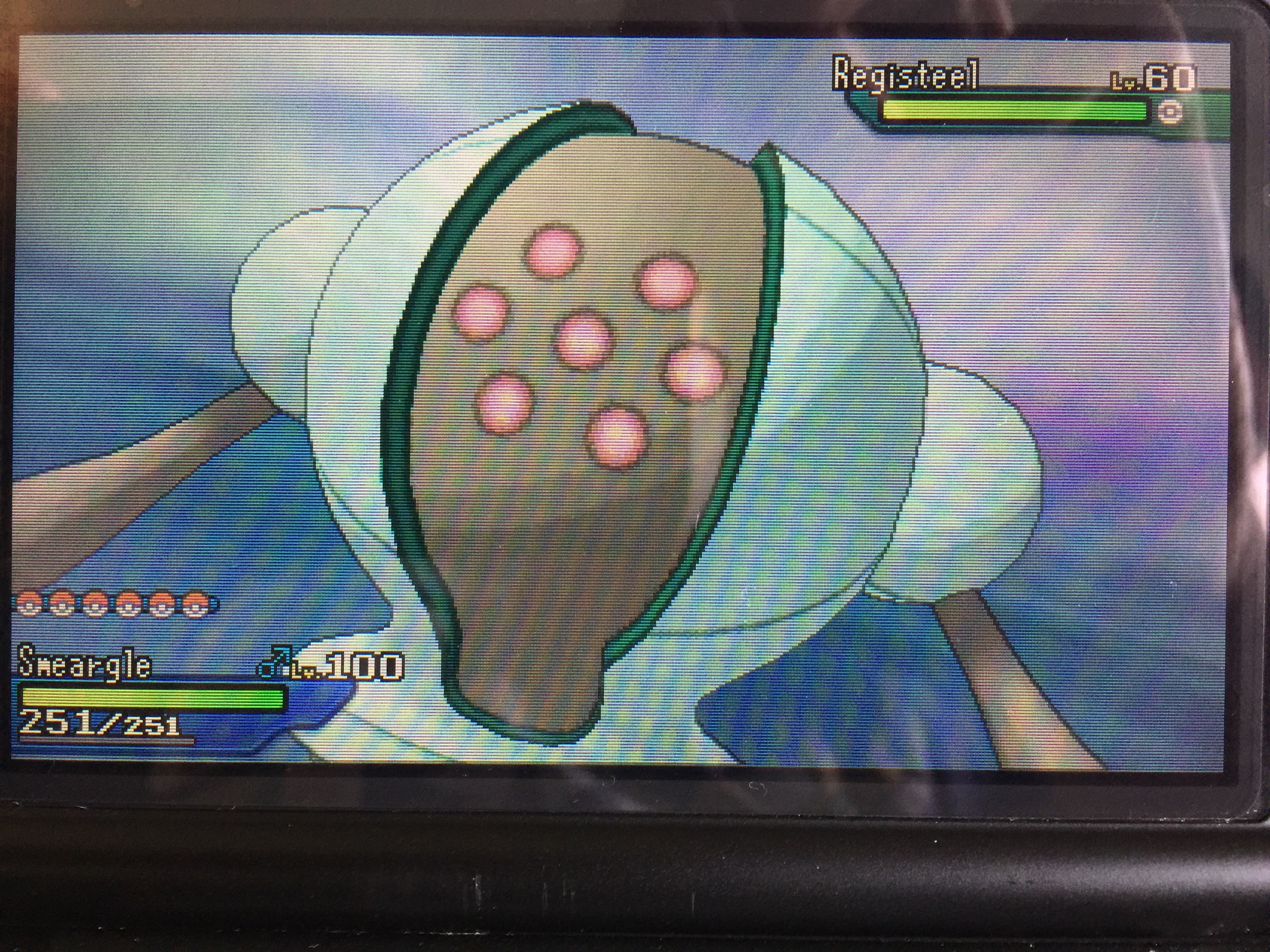 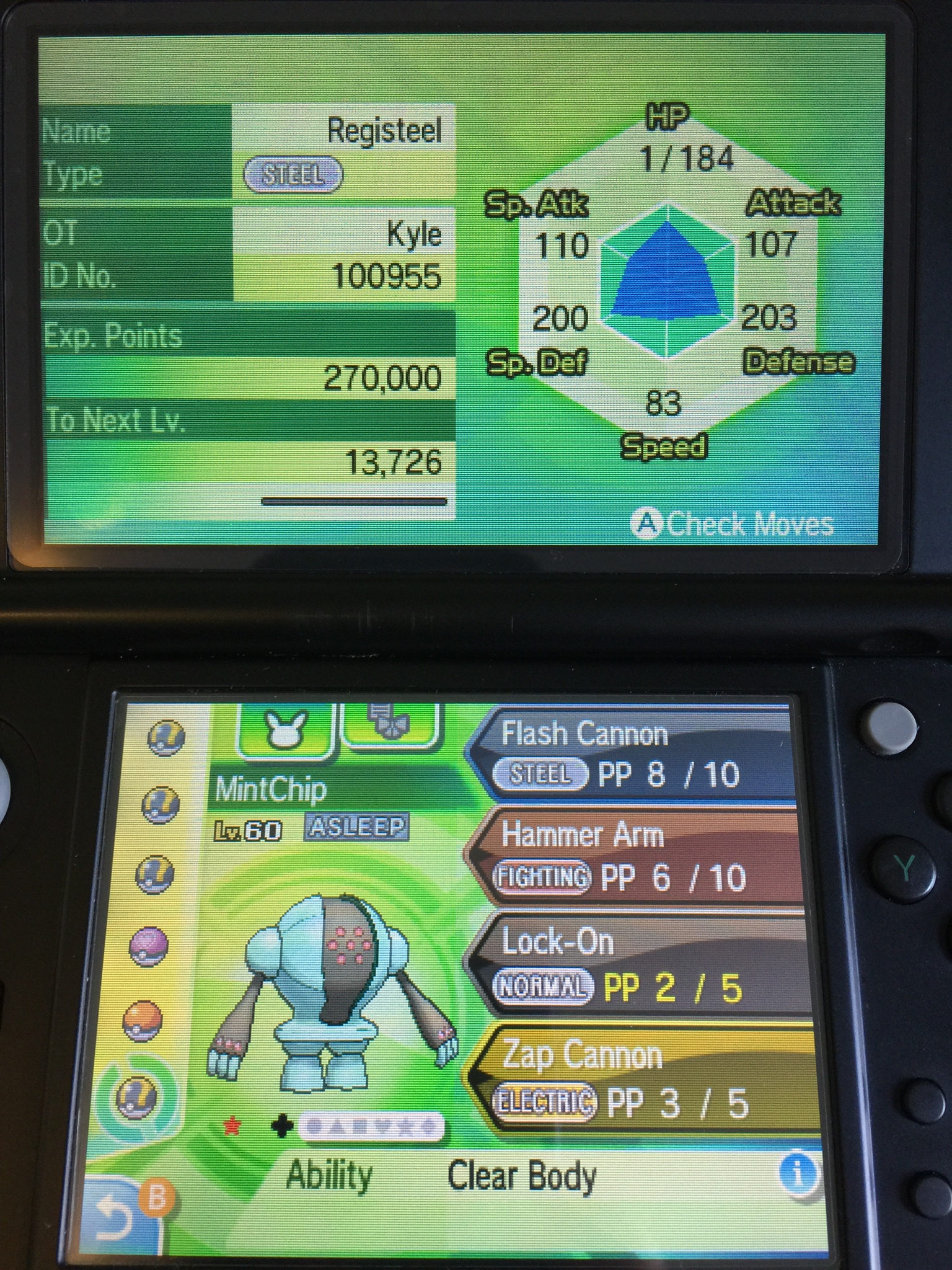 No news in anything but Go...
Well Moltres Day was interesting. On my last "easy" (a.k.a. not having to drive somewhere else) raid, I finally got a shiny Moltres. That was 11 or 12 raids then, I forget. Then, that same day, I got a shiny Bulbasaur and Murkrow as well. That boggled me quite a bit. Still hunting like crazy for Growlithe and Houndour tho. Both are very common locally, but no luck.
Guzzlord has stolen my heart. Or eaten it. I'm not sure.
Most recent hunted shiny: 5250 SRs

The purple pebble hatched out Careful nature, takes plenty of siestas, 31/31/31/xx/xx/31, and has Weak Armor. Should become Sand Stream once it evolves to gigalith. He also hatched in a beast ball, which is a bit of a miracle... I had to go catch a roggenrola to start breeding, and I got it in the beast ball on the very first toss. That right there is the miracle considering the catch rates those balls have for 'mons that aren't UBs.

That's all the trade evo 'mons I have for the moment (I think...). Now I need to find a trading partner. And make a trip to the battle tree to grab a few more evo items... And evolve geodude and roggenrola to graveler and boldore.

Going to hatch for beldum next.

Anyone on my friend list willing to help me with some trade evolutions? Please?
Last edited: Sep 10, 2018

Edit: Second one after 426 eggs. This one got Sturdy

350 eggs and counting for beldum. Looks like things are getting back to normal in terms of hunt length.

Still looking for someone to help me with the trade evolving.

My most recent shinies include:

Edit: With the help of Artnerd, all my trade evos are done

Male, jolly nature, somewhat vain, and he got his HA, Reckless. Almost perfect IVs, but got a "very good" DEF stat. It's still pretty high, though.

Going to hatch some fossil 'mons next. Up first is cranidos, then archen.
Last edited: Sep 13, 2018