FINALLY! After God knows how many months spent in the swampy area of Y, between horde hunting ekans and RE'ing carnivine, and months after I got ekans, I finally got my shiny carnivine! And it was male, like I was hoping for, since James's carnivine sounded male even though its gender was never 100% confirmed. At least now I've knocked another pokemon off my Team Rocket shinydex list. Now I'm going to put AlphaSapphire to rest for a while and horde hunt on Victory Road on X and Y at the same time so I can hunt for lickitung, and I'll keep a basculin with soak in the front in case of a shiny geodude in a horde (I've found success with making geodude a water type with soak to lower its vulnerability to magnitude).
New shinies week of 1/13-1/20: Ralts, Clefairy, Slugma (evolved into Magcargo) (Pokemon Go)
New shinies week of 1/20-1/27: Larvitar x2 (evolved one into Tyranitar), Zigzagoon (Pokemon Go)

Surprised I never posted here, but got the last Geodude after 441 eggs back on Thursday. At 180 eggs currently for the first Ponyta.

Archen next. After that I'm just going to shove shieldon in without caring what nature, ability, or IVs it gets... In my personal opinion bastiodon is hideous so I never intend to do anything with it

Edit: Was messing around in the friend safari in Y for a bit earlier today. Hoping to find a swirlix. Instead I got two clefairy. Both males, one is lonely, one is naughty, and both have Cute Charm. Both will be wonder traded upon transfer to Ultra Sun.

Male again, jolly nature, likes to thrash about, Defeatist. It's 5IVs but the IV it's missing is Speed of all things >.< It only got a "decent" speed stat. Still a pretty fossil bird, though.

Next up, gonna shove shieldon in and see what I get. I've actually never hatched a shiny shieldon before since I don't like its evolution, but what the heck. After that will either be tirtouga, or I may go back into the wormholes after xerneas.

Again, male. It came out impish nature and capable of taking hits, with Sturdy. A single max IV in DEF. Meh.

Think I'm gonna go after xerneas next, then tirtouga.

Edit #4: Shiny nuzleaf from the wormholes. No idea how many runs that was... I'm not counting. Female, modest, capable of taking hits, with Chlorophyll

Named Csodaszarvas after the sacred white stag of Hungarian mythology. Sync worked and it came out modest nature and mischievous, with Fairy Aura. Took a while to whittle it down since it wouldn't stay asleep and kept using Horn Leech, but finally I got it down to 1HP and threw my first dive ball...

Finding this critter was harder than actually catching it. I spent probably more than 5 hours altogether running wormholes trying to find it. Found raikou and ho-oh twice, mesprit, uxie, registeel, terrakion, virizion, and cresselia at least once each. Finally as I was running out of steam about 6,000 lightyears into the wormhole, I steered into a two-ring green and finally found xerneas waiting for me.

Back to hatching now. Target is tirtouga, then aerodactyl, omanyte, and kabuto to finish off the fossils.
Last edited: Sep 19, 2018

Found a shiny Eevee in Sun while I was SOSing for no reason! Here are some pics of him. I was surprised how quickly I found him. 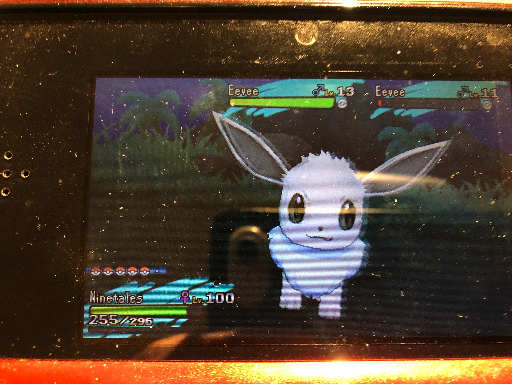 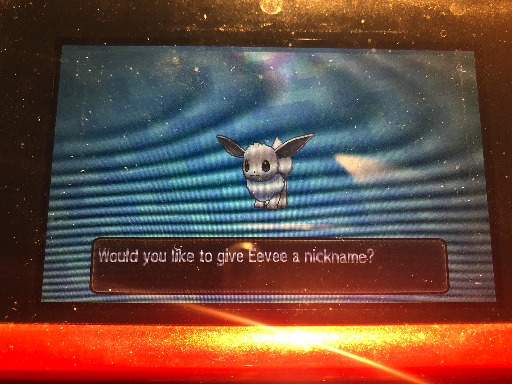 I know how good that feels. I was SOSing for level grinding and I had the luck of encountering a shiny Chansey. I really like shiny Chansey because it reminds me of St Patrick's Day and a four-leaf clover, which is appropriate
Favorite Generation: V
Favorite Pokemon per generation: Mewtwo, Jirachi, Giratina, Ferrothorn, Klefki, Mimikyu, Falinks, Tinkaton
Favorite type: Water
Favorite team: Plasma
Most recent shiny: Banette (Scarlet random)
Recent GO legendary: Reshiram
Switch Friend Code: SW-1509-3691-0315
GO: Redjirachi93, 3853 8382 6220

Shiny tirtouga after only 122 eggs. The luck continues...

Would have had this last night except I wasn't hunting last night. Male turtle, adamant nature, capable of taking hits, 31/31/31/31/xx/31, with Solid Rock. I love that shade of blue-green on this shiny

Got my first shiny Ponyta tonight after a long, 1,914 eggs. These are hatching Jolly, with High Horsepower, Double Kick, Hypnosis and Horn Drill. At 110 so far for the second one!

After a long while, I finally found a shiny Cresselia in Ultra Sun yesterday. Admittedly, I didn't shiny hunt much the past weeks since I was mainly playing Torna: The Golden Country. But since I've done basically everything you can do in that game I went back to watching anime and that means soft resetting while doing so.

Found Moltres' spawn now so I'm going for that one, which will wrap up the Kanto birds and regular red wormhole legendaries for me when I find it.

Congrats to everyone with their shinies and good luck hunting your current targets.

So I got my second Ponyta after 459 eggs last night. This one has a more favourable 5IV spread missing Defense so this one will be Rapidash.

Aaand Moltres just shone. This was a super fast SR shiny hunt, probably the fastest I've had, lasting less than a day.

Next target's Rayquaza. Maybe Landorus after that one to completely finish the red wormholes although I might try for Kyurem before that since Kyurem is one I've attempted back in gen 5 but never managed to get.

Moltres and the Cresselia I caught last evening 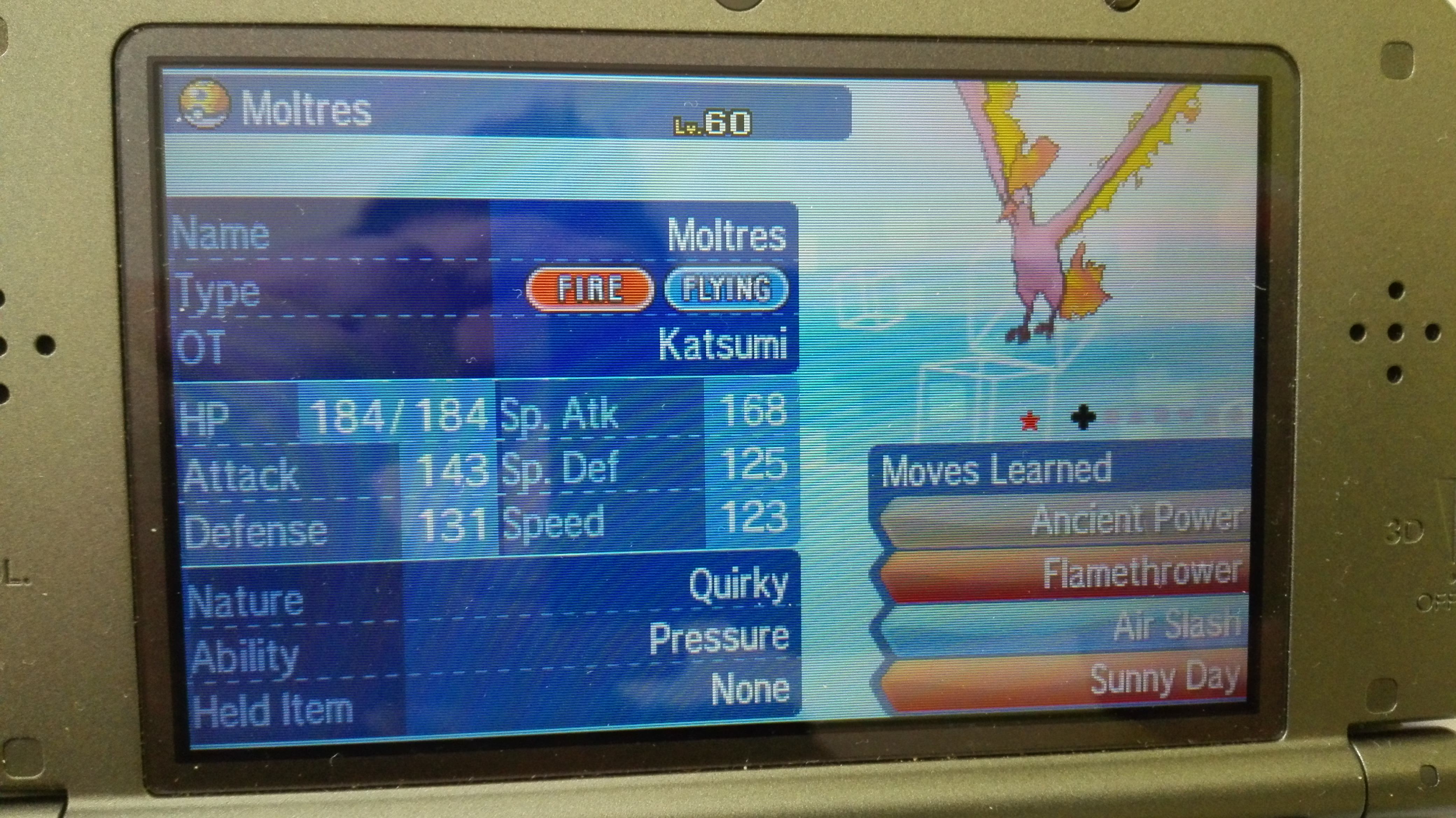 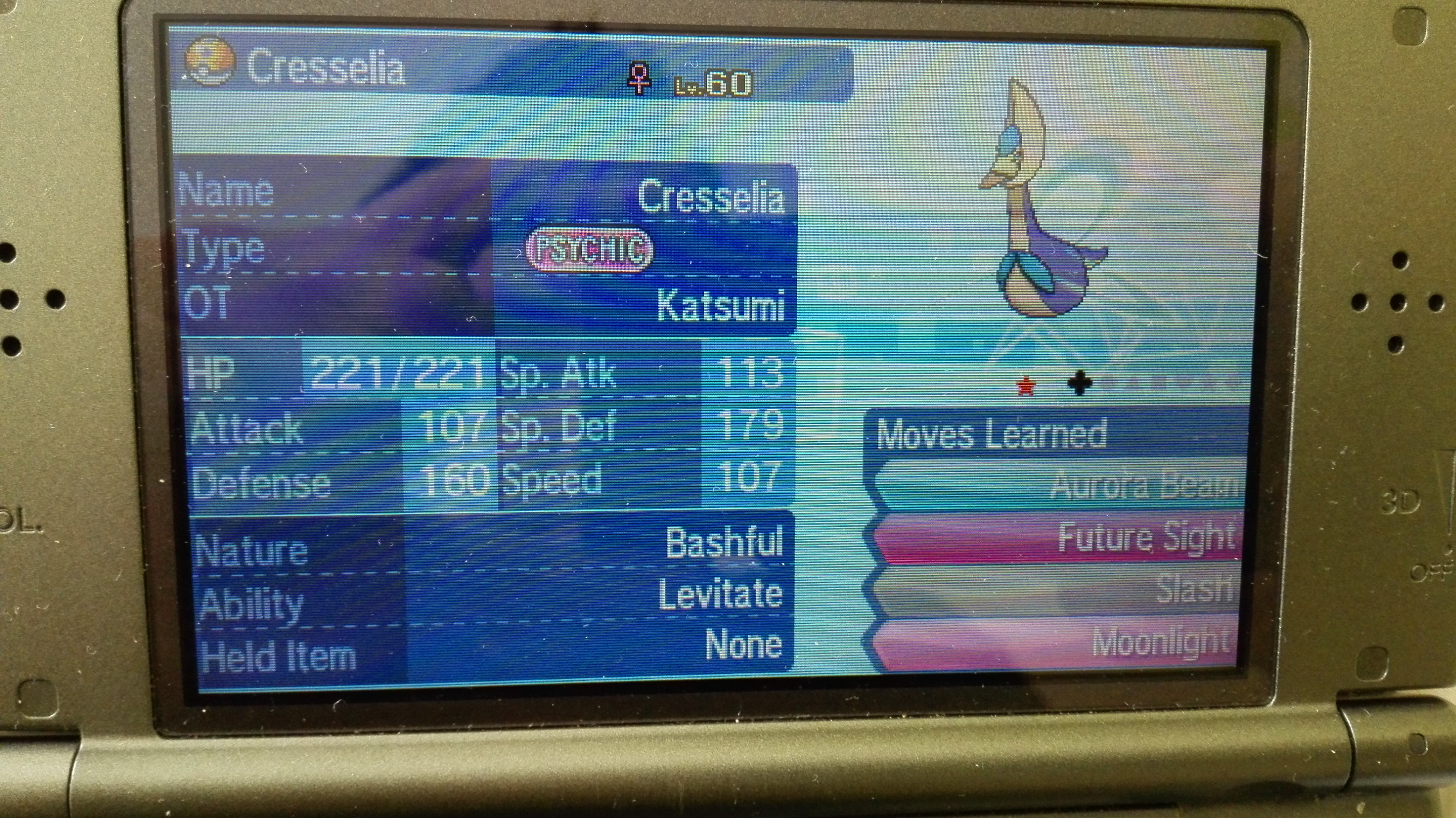 So, Slowpoke decided to be really quick tonight as I got both required for the Kanto part of the line in 35 SOS calls and 85 SOS calls respectively. Both got Synced Calm, and one is now Slowbro.

About to hit 1,000 eggs for aerodactyl. Looks like things are getting back to normal hunt-wise

First magnet after 426 SOS calls. Synced Modest, but unfortunately only a Decent Sp. Atk IV, so will likely remain a Magnemite.

EDIT: Second shiny magnet at 109 calls! This one also Modest with Sturdy, but much better with IVs this time. Will be a Magneton.

Just managed to snag a shiny Shuppet on Mt. Pyre in Emerald! Was just looking for a Shuppet to trade across to my FireRed game as I am trying to complete the Pokédex and the first one I came across was a shiny. Threw one Ultra ball and caught it without having to whittle it's HP down. Happy days!
Currently playing : Diamond - Play time: 635 hours 57 minutes, 463 owned, 479 seen, 10 shinies

I managed to get that shiny Groudon I was looking for. I even caught it in the Heavy Ball, something I had been saving for this very moment as it is the heaviest Pokemon that can be caught period. Afterwards I moved on to getting a shiny Kartana. And in the very same day, within less than an hour, I got it! Barring the Omanyte hunt, this might just be the quickest hunt ever. Even more than Cobalion

So, last night I hatched my shiny Farfetch'd after 628 eggs! Got the HA of Defiant too, which I'm very happy about.

And just now, I hatched my first Doduo after only 82 eggs! Also got it's HA of Tangled Feet, which is great

Staff member
Moderator
This is from a few weeks ago, but I didn't have time to upload the pic until now. 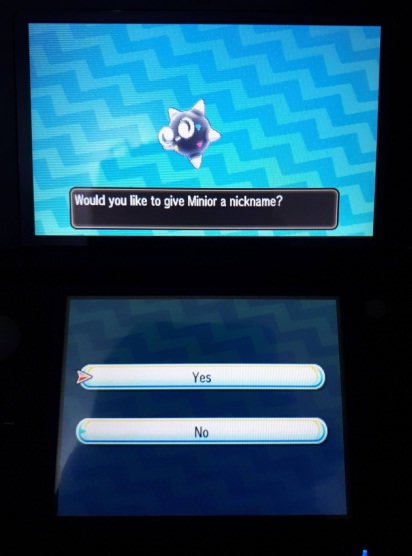 And then I decided to hatch Shiny Pidgey for living dex purpose. Only needed one (since I already have a Shiny Pidgeotto from Gen 6 and Shiny Pidgeot from Gen 4), but after 632 eggs, I got two, separated by just 5 eggs lol 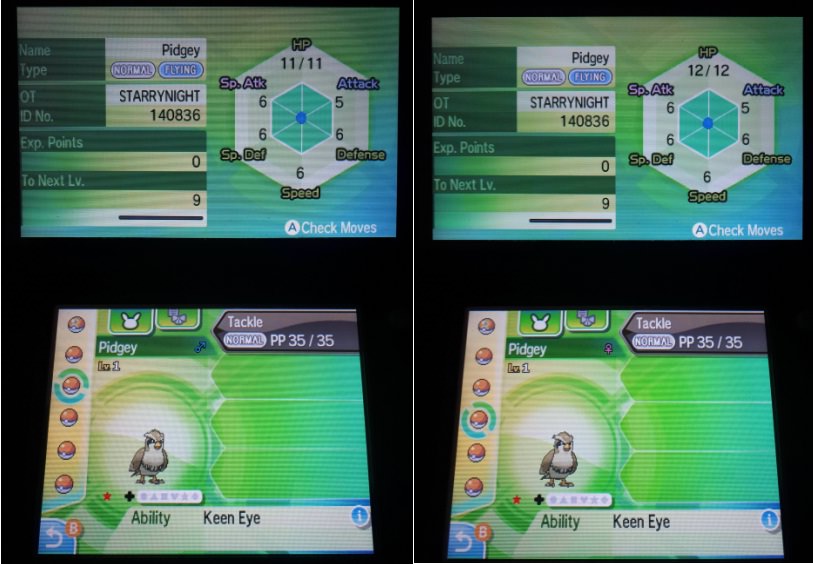 After hatching those two Pidgey I decided to SOS Crabrawler since I got a seemingly legit one from WT, I plan to keep one unevolved, and evolve the other one. In less than 40 calls a Shiny Crabrawler shows up
(and yes, I caught it, in a Beast Ball too.) 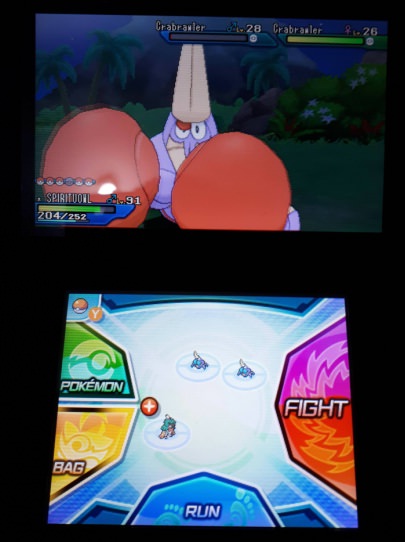 My shinies. *shows off XD*

Shiny omanyte after 869 eggs. Yup, hunts are pretty much back to normal.

Up next is kabuto to finish off the fossils.

Edit: ...Okay, then. Shiny FEMALE kabuto after a mere 157 eggs. I was not expecting to get it that fast.

She's Jolly nature, likes to thrash about, perfect 6IVs, with Battle Armor. Will be an awesome kabutops.

Going to start filling out my dex more now... Hatching for fletchling next.
Last edited: Oct 3, 2018

Before work, got the second Doduo after 426 eggs!! This one is 5IV missing Speed, so will likely remain a Doduo with the other becoming a Dodrio.

Edit: Got my first Seel last night after 122 SOS calls. Took a while to get a pic showing the difference, but finally got it. Calm Synced missing Sp. Atk and Speed, so likely to remain a Seel.

Edit2: And just got the second Seel after 152 SOS calls. This one missing HP and Sp. Atk, so the first will be Dewgong, I feel.

Edit4: Second Grimer after 444 eggs! This one got Stench, not Poison Touch like the first, but I think I can still make it work with Shadow Sneak on the set.