Been forever since I last posted here so here is my update Gastrodon, Sigilyph, Abomasnow, Nuzleaf, Drapion, Hippowdon, Yanmega and Alolan Sandshrew are all new
Fc 190809318571 ign for y Aireus :025n172:
My friend safari has electrode, zebstrika, helioptile
In game name for omega ruby is Aaron
In game name for sun Aireus
In game name for ultra sun Aaron S.

Got my Shiny Palkia.

Glad I got it though, it's an Impish nature and I nicknamed it Caelus.

Not sure what to go for next, but I'll figure it out. Might go for Nihilego or Pheromosa, but I'm feeling SOS.
Currently Hunting:

Was running around in Y while watching TV this evening. I'd started off with a horde hunt but it was raining on that route, so I went back to the friend safari and went into a rock safari. Was looking for nosepass, to transfer ahead to Ultra Sun for the dex. Tripped over a shiny shuckle instead. Female, quirky nature, with her HA, Contrary.

I played Alpha Sapphire and was heading for Kyogre in the Cave of Origin, but something else caught my interest. I Found a Shiny Sableye ... !!

I love when I find unexpected Shiny Pokémon.

It took a while, but yesterday Rayquaza finally shone. Gonna take a pic later since I already continued for the next target.
I wanted to go for Kyurem next so took my Reshiram and Zekrom with me into some blue ultra wormholes (found a shiny Lombre in the meantime, I already have a shiny Ludicolo but it can fill the Lombre spot in my living dex).

I actually ended up finding Azelf. Which is great as well since it was a target of mine back in pokémon Diamond but I never managed to succeed that hunt. Plus I was gonna go for it anyways if I got Kyurem first since the only shiny legendaries I still need from US blue wormholes are Uxie, Azelf and Kyurem. Gonna keep doing blue worhole hunts untill I've got all three.

So I got my first Shellder just now after 764 eggs. Missing HP which is still a Very Good, so pretty happy with that.

Edit: PM me for my spare shiny Poipole code. I have one left. USUM only for NA


RedJirachi said:
While it wasn't as quick as Kartana, it didn't take long for me to get a blue Xurkitree. Now I have the difficult Ultra Beasts done, I'm going after Buzzwole and Nihilego
Click to expand...

Nice! Xurkitree is the one I'm working on in US right now.

Kind of having a shiny drought, but I'm more focused on finishing stories than actually shiny hunting in a lot of my games.
Last edited: Oct 13, 2018
[insert clever signature here]
S

Well I was wonder trading I got a real shiny furforo. It has no perfect IVs or anything I was shocked because that was the one I was hunt next
Fc 190809318571 ign for y Aireus :025n172:
My friend safari has electrode, zebstrika, helioptile
In game name for omega ruby is Aaron
In game name for sun Aireus
In game name for ultra sun Aaron S.

I'm in a bit of a drought at the moment. Sitting at 1,200 eggs for fletchling and idk how many REs in the friend safari. Right now I'm doing the safari hunt as a change of pace from hatching eggs, and the last shiny I got was that shuckle a few days ago

Edit: Found my shiny nosepass. Female and modest nature. Now wandering over to a steel safari for a while.

Edit #2: Shiny bronzong after idkor ("I don't know or care") how many REs. It's timid and somewhat vain, with its HA, Heavy Metal. Meh...

Gonna stay in this safari for now... Looking for forretress of all things.
Last edited: Oct 12, 2018

Shinyhunter1990 said:
Up to 195 eggs for Dhelmise hope this one shinies before All Hollows Eve
Click to expand...

Good luck! I was going for dhelmise last year and it actually shone on Halloween!

Got my shiny forretress. Female, careful nature, mischievous, and has her HA, Overcoat. But the color looks... nastier than I remember. Ew. I'm going to use her to breed a shiny pineco, then WT the forretress and keep the pineco. Pineco is a much nicer color.

Edit: And there's my bazillionth shiny clefairy. *headdesk* Female, Friend Guard, careful nature, alert to sounds. Wonder Trade is going to love me once I get all these clefairy back to US and start disposing of them...

Edit #2: Finally got my shiny swirlix. Lonely nature, capable of taking hits, with his HA, Unburden. I've been getting stupidly lucky with the hidden abilities lately.

Switching fairy safaris and going after spritzee next.

I also saw two shiny male kirlia, but I ran from one because I wasn't paying attention and the other teleported away.

Been Friend Safari hunting for a female Combee shiny, just under 400 encounters and I've managed to find a shiny Volbeat - never had one before and my first ever non-Gyarados shiny was a shiny Illumise in Ruby so I absolutely cannot complain.
Local Cat-Pigeon hybrid. On average, I drink ten cups of tea a day.
Umbreon, Espurr and Chansey are my favourite Pokémon / Johto is my favourite region.​
S

I was sitting at the table between trick-or-treaters, dressed as a black cat, when suddenly a shiny dhelmise appeared on my screen. Perfect Halloween shiny

Hanging around to see if I can find garbodor before I move on.

Edit: Shiny whirlipede. Male again, hasty nature, takes plenty of siestas, and has Poison Point. First shiny in a while without its HA. Will be evolving b/c I love shiny scolipede

Edit #3: Was hunting the safari during loading screens (farming Behemoth in Monster Hunter on my Xbox) and got two more shinies... my third seviper and second whirlipede. Seviper is lax and capable of taking hits, with Shed Skin and holding a persim berry. Whirlipede is male, relaxed nature, mischievous, with Poison Point.

Edit #4: In the interest of not getting more duplicates, I moved to another poison safari with garbodor. And I found a shiny kakuna. Female, bold nature, takes plenty of siestas, with Shed Skin

Edit #5: *sigh* Shiny muk. Female, hardy nature, mischievous, with Sticky Hold and holding a Black Sludge. I have now found both of the other two available shinies in this safari, and still no sign of garbodor. Unfortunately, I only have two garbodor safaris, so I guess I'm going to have to put up with the duplicates.
Last edited: Oct 16, 2018

Second Shellder finally popped out after a nightmarish 1,981 eggs in PokeMEN's stream. Missing Speed, so this one will remain a Shellder.

Edit: Of course I get an unneeded third in the remaining eggs lol (9 eggs after the second one). Shell Armor though, so will likely be Wonder Traded.

Dhelmise hunt on hold at 350 eggs. Now Softresting for Rayquaza. Up to 75 soft resets I got bored of just hatching eggs and need to train my team up for the spooky cup
Fc 190809318571 ign for y Aireus :025n172:
My friend safari has electrode, zebstrika, helioptile
In game name for omega ruby is Aaron
In game name for sun Aireus
In game name for ultra sun Aaron S. 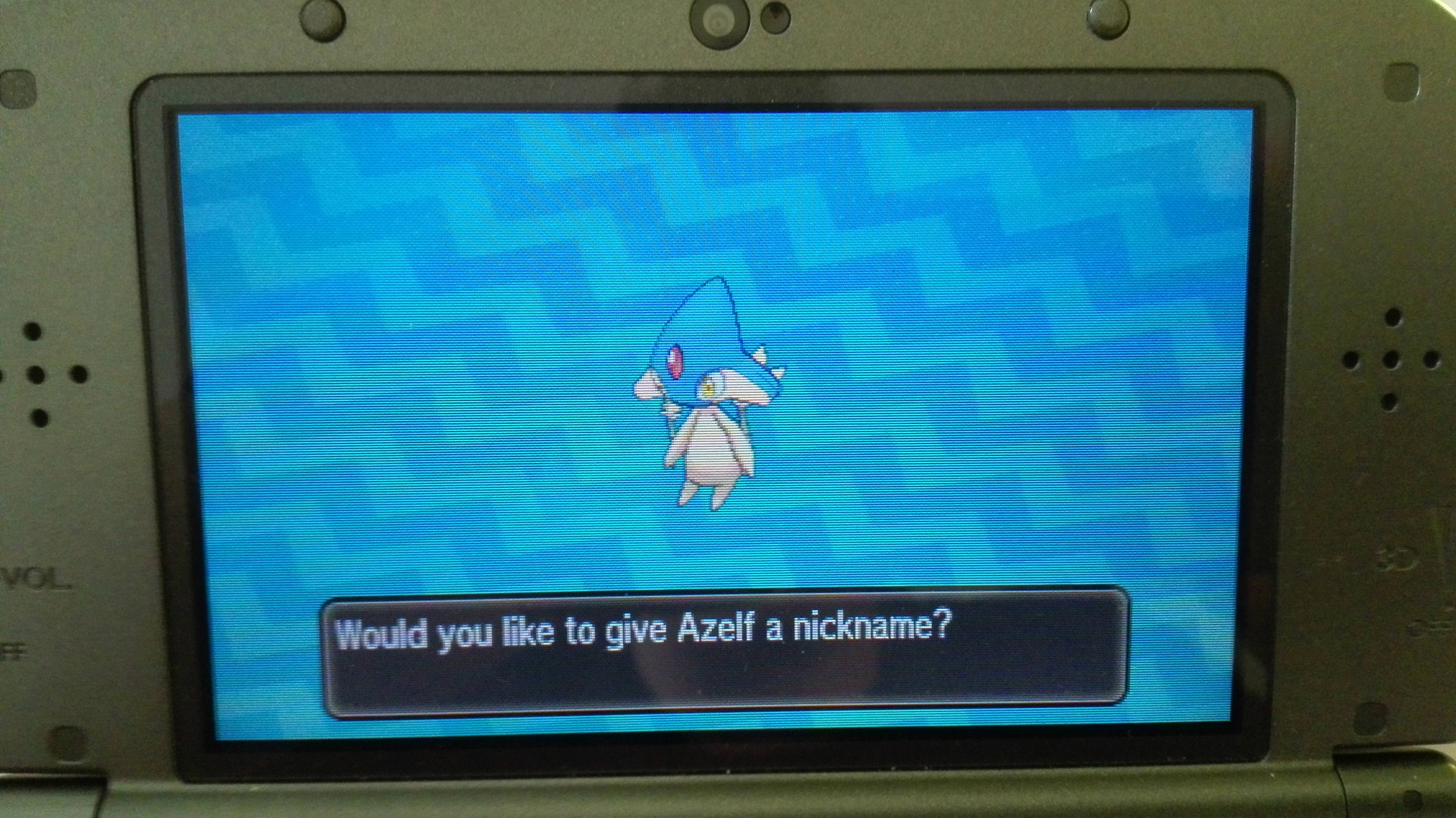 Now I only need Uxie for a complete set. 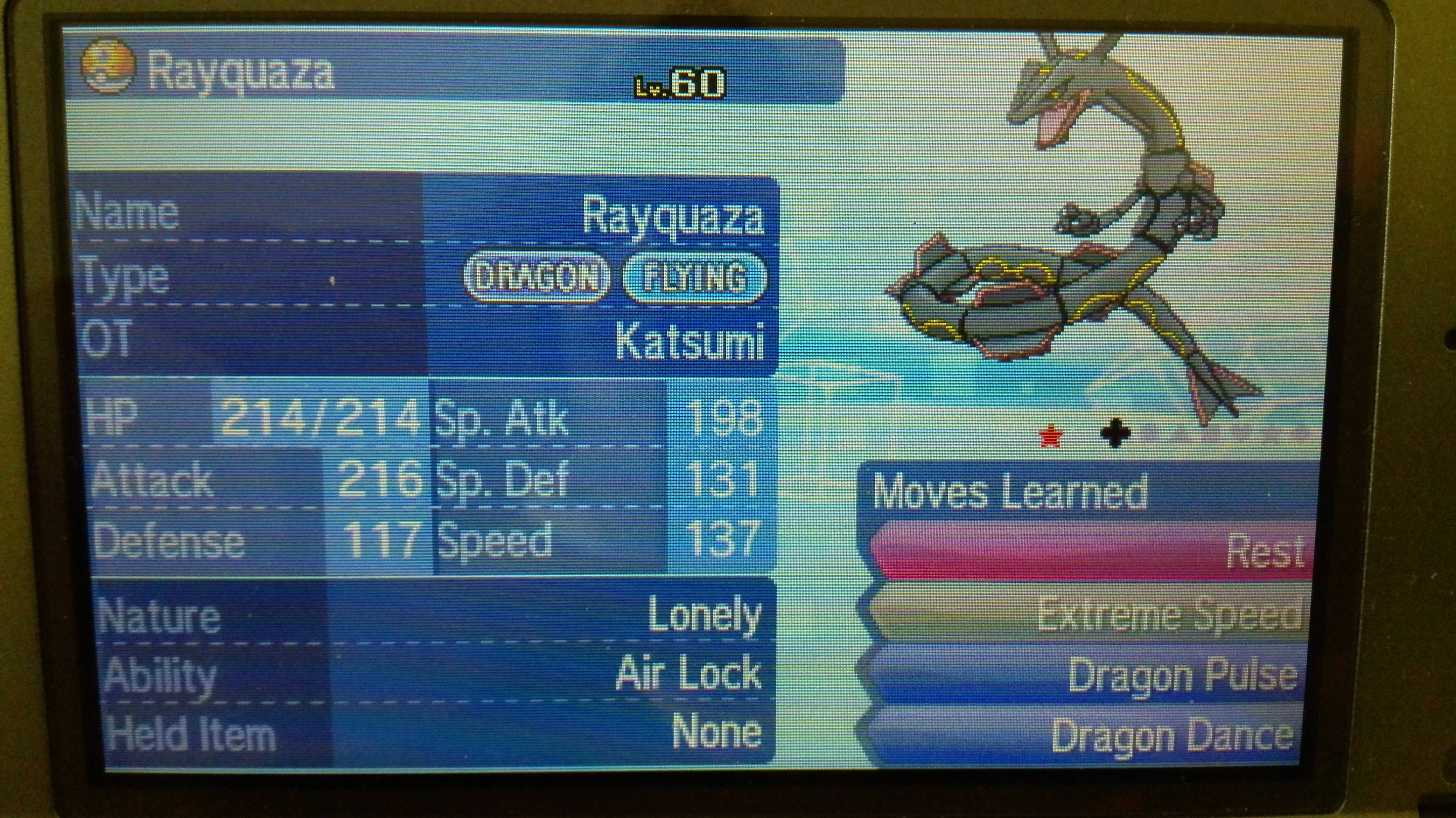 I continued going through blue wormholes for either Kyurem or Uxie and ended up finding Kyurem's spawn. So now I'm SR'ing for that one (Uxie after it to finish hunting Ultra Sun blue wormhole legends and the lake trio set.

I moved everything back to US and got them stat-checked... Almost all of the shinies I caught have max IVs in DEF or SpDEF. Holy crud that forretress, though... Max IVs in SpATK, SpDEF, and Speed, and "very good" in everything else.

Resuming my MM hunt for fletchling now. There's still some stuff I want from the safaris, but I want to get this dang fletchling first.

Will be hatching for HA larvesta/volcarona next.
Last edited: Oct 19, 2018

After a long and Spiteful 938 SOS calls, shiny Gastly shows up! Two Haunter SOSes to come on the off chance of a shiny Gengar!