Shiny crabrawler after only 134 eggs! I think it took longer to get a crabrawler with the right nature than it did for the actual shiny to appear.

I have acquired a copy of Ultra Moon and have the eggs ready to transfer over. I'll be powering through to get at the version exclusive UBs and legendaries

Edit: I finally caught that shiny aipom from the friend safari. Female, timid nature, with Skill Link. I'll get her moved to US when I get the chance. Right now I'm working on UM; I just cleared the water trial.
Last edited: Dec 30, 2018

So last night I got my second Horsea after 249 eggs! It's now a Seadra.

And just now I got the first Goldeen after a lucky 13 SOS calls!!!

I have my UM team stuck in Isle Evelup to get some levels for a bit, so to kill time I'm actually soft resetting the Ditto Five in US. I caught the one that was disguised as a cop without SRing it, which I kicked myself for later (after I was at a point I could no longer just reset and go back to do it). Just got the second one (the herb seller) after 331 SRs. Its nature is guaranteed Jolly, with only one max IV in Speed but 30s in both SpATK and DEF

Got the second Goldeen last night after 198 SOS calls. This one 4IV Adamant with Fantastic Attack. Also got its HA of Lightning Rod!

First shiny of the new year is the second blue ditto, the one that had been disguised as the chef. This one is guaranteed adamant and likes to thrash about, with a max IV in ATK and 30s in both Def and Speed. Got it in 702 resets.

On to the one masquerading as the masseuse.

Edit: That was quick. Shiny ditto #3 after only 262 SRs. Guaranteed modest, mischievous, max IV in SpATK and a 30 in SpDEF.

Last one is the one impersonating Olivia. This should be the timid one.
Last edited: Jan 1, 2019 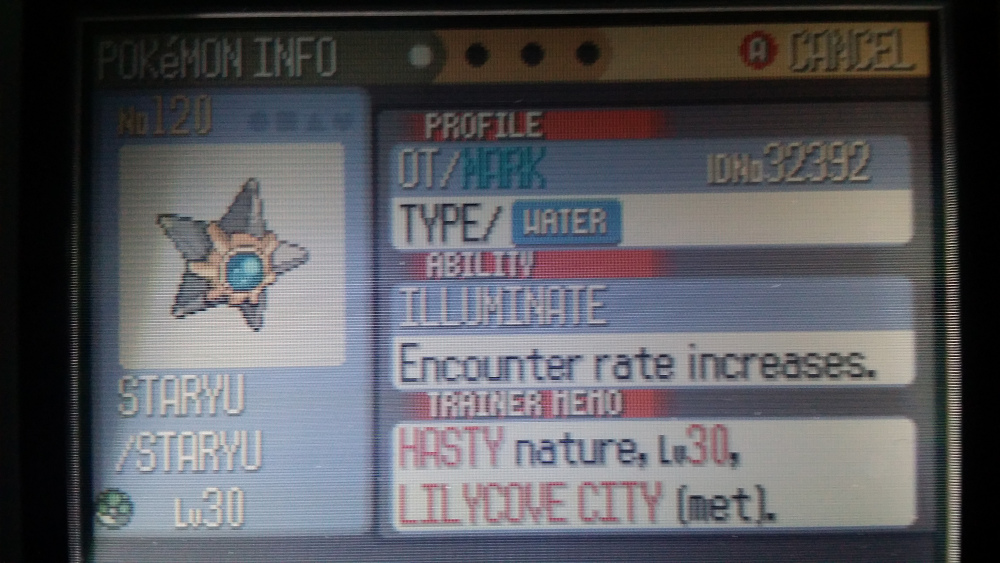 I caught a shiny Staryu while fishing for normal one for a new living dex. The nature isn't ideal, but it could be worse.

At last! I have gotten myself a shiny Blacephalon. It didn't off itself with Mind Blown, I got it in a Beast Ball so my Master Ball can be saved for something else. It's a Bold Nature, and I named it Pennywise.
Favorite Generation: V
Favorite Pokemon per generation: Mewtwo, Jirachi, Giratina, Ferrothorn, Klefki, Mimikyu
Favorite type: Water
Favorite team: Plasma
Most recent shiny: Alolan Vulpix(Pokemon GO)
Switch Friend Code: SW-1509-3691-0315
GO: Redjirachi93, 3853 8382 6220

So I got my first shiny Staryu tonight after a long 583 SOS calls. Ended up Bold, so Modest sync failed, yet that's still a workable nature!

EDIT: Honestly didn't expect to get the second one tonight but it proved me wrong by showing up after only 17 SOS calls! Makes up for the long first one!

Shiny lillipup in Y's friend safari XP I caught it in a quick ball, but didn't bother to look at it. I was in there looking for chansey for my US dex.

My UM battle team is on its way back to UM. Once I get this last stubborn ditto I'll start pushing through the storyline again.

This is the guaranteed timid one, one max IV in Speed abut 30s in ATK and SpDEF. So it looks more like Jolly than Timid.

Next breeding project in US will be some water 'mons: skrelp, staryu, shellder, and clauncher, in that order. But first, some more pushing through UM. I've also played a bit of X (I got the free digital version but hadn't done much with it. It makes good boredom relief when sitting in a hospital parking lot though)

Edit: *sigh* Second shiny lillipup from the friend safari. This one is quirky and has Run Away (the first one was bashful and had Run Away). Both will be WT'd once I get them back to US
Last edited: Jan 5, 2019

Shiny staryu in X! It's chain fished so the stats will be garbage, but dang, it's a shiny stayu!

I'm astonished that I got staryu instead of clauncher, honestly. Staryu is what I came for, but clauncher is 70%

It's careful and very finicky, with Illuminate. This one will be staying a staryu; I'll breed and evolve a better one in US at a later date.

I love staryu's shiny. The blue and silver make it look badass

Edit: And there's the clauncher, 38 casts later. I love it when a route cooperates (it happens so rarely). Naive nature, good perseverance, Mega Launcher. Will be staying a clauncher; I'll breed a better one for clawitser later.

So I got this 3 days ago. Mime Jr. for Mr. Mime after 146 SOS calls! Ended up Adamant which is shocking for a Mime to have, and also got Technician, but don't think it'll help that much. Currently at 121 SOS calls for Scyther. It takes a while.

EDIT: That's the shiny Scyther finally after 132 SOS calls with a 3 call rate! That caller was still decimating my substitutes even at -6 Attack! Jolly Sync worked and it has Technician!

Congrats guys! I haven't been here in ages! I've gotten heaps of new shinies since Tympole, would ya guys be interested in hearing about em?
RaichuArcanine's New Account! 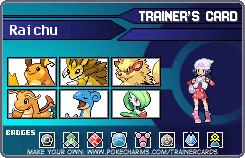 Shiny Magby for Magmar after 428 SOS calls! The Happiny throughout this chain gave me a lot of scares! And by all means, ArcanineRaichu. It's what this thread is here for after all!

Congrats to everyone who got shinies since mid-December!

As I previously mentioned, I started a Shiny Badge Quest in Let's Go Pikachu, and I am currently 5 Pokemon in.

I got a Pikachu on Christmas Day after having started a chain on Christmas Eve. This was followed the next day by getting a Modest Clefairy (It's funny. It just didn't want to show up, so I was like, "What, do I need to catch another one?" and immediately after the Shiny popped up). After that, I got a Shiny Drowzee the day after that. And then, the day after that, I got a female Growlithe fairly early into the hunt. That was 4 Shiny Badge Quest Pokemon in as many days.

During this time, I had found a dumb way of automating Alolan Trades and traded 2800 Alolan Rattata in Let's Go Eevee but haven't gotten it yet. I took a break from it when I beat Erika in Pikachu to hunt for my fifth Pokemon, Alolan Sandshrew. After <4000 trades I got it, and it's Adamant (Trash IV's, though). It was a very nice early birthday present for me. In my excitement, I didn't think to actually find out how exactly how many Sandshrew I traded (I was trading 400 in a batch and waited until this batch ended to check.)

I'm going to move onto Shellder after this, because I haven't taken one to the Elite Four before.

So I got my shiny Pinsir tonight after a full day SOSing at 141 SOS calls! Jolly Sync worked, and it has Mold Breaker.

Hello, everyone! It's been a while!

Since my Dratini hunt I took a break from shiny hunting because I honestly didn't know what to hunt for the rest of my Heartgold badgequest. To be honest, there's not a lot of things I want to hunt in Heartgold. So I cancelled the rest of my BQ. Then I didn't feel like hunting in other games anymore. But I recently got back into it when I got Let's Go! Eevee. My love started again when I found a shiny Caterpie within the first hour of playing the game. I got 7 seven badges now, but I already wanted to start hunting. First thing I wanted to hunt for is Mr. Mime. For some reason, I really like the lime green.

(Just a note, I'm not doing the catch combos while hunting because I prefer full odds hunting.)

First phase I didn't count how many Pokemon I saw. I was too anxious to start. I estimate it was probably around 4000, though. I figured the first thing I was going to find was either going to be a Pidgey or a Rattata. And I was right because I found a shiny Pidgey. Second phase I was expecting a Pidgey or a Rattata again because there's so many on this Route. But I was surprised after around 2870 Pokemon seen (I tried to keep a close tally), I found a shiny Mr. Mime. And... it ran from me pretty quickly. Bummer... Well, I wasn't giving up so I tried again. Darn it, another Pidgey at 588 seen! And tonight, after going a little over the odds I found a shiny Drowzee at 4638 seen. You know what, I can live with that. I'll take a shiny Drowzee over another shiny Pidgey.

I'm going to try a little longer before I go to bed. I'm not giving up! I want that green clown!