Is anyone else soft resetting for a shiny starter? I am, yay blue Treecko!
And don't forget to get your shiny Beldum holding a Metagrossite!
So many Poochyenas... Hope no shiny ones appear... No pokeballs yet...
Just found out shiny Beldum is available until January, so I can definitely get my little brother one.
Last edited: Nov 22, 2014

I spent a good hour at least using Wonder Trade(mostly leaving the game idle while checking the internet) and saw lot's of Wurmple, and Zigzagoons. Just started up the game now and did it a couple more times just to see what I would get. I got a Japanese Lileep at lv 20, it's over leveled compared to my other pokemon(lv 9 Mudkip being the highest) though so I'm just keeping it in my PC. Since I'm still just in Petalburg City I should really getting going.

I wandered around the Petalburg Woods and battled wild Pokemon. I caught a Slakoth, Cascoon and Shroomish for my Pokedex as I explored the tall grass and then as I moved north I battled a Bug Catcher and easily slayed his Wurmple with Torchic's Ember. I soon spotted a Devon researcher and he was confronted by a Team Magma grunt. I battled him and did away with his Poochyena swiftly. The Devon researcher gave me the Exp. Share key item afterwards and I sashayed further north and I battled another Bug Catcher. Wingull beat his Nincada and I finally exited the woods after picking up items. I arrived at Route 104's northern end and got the Echoed Voice TM from a boy, then saw the Pretty Petal Flower Shop.

Currently fighting at the Rustboro City Gym. My current team as of right now are Seedot (#Wethenorth), Pocheyana (Severd Cerbs), Ralts (Two Blades), Beldum, Mudkip (Kifbert), and Tailow (Needy). I'm pretty satisfied with this team as of right now, but I'll make adjustments when I find new stuff
A

Staff member
I spent quite a lot of time on the Route 109 beach. I battled several trainers on the beach itself, then went inside the little house there and fought some more people for some Soda Pops. When I was done with that, I entered Slateport City. I checked out a few places in town, such as the market area and the fan club, then headed over to the shipyard. A guy named Dock in there told me to go over to the museum to find Captain Stern.

So, I went over to the Oceanic Museum. I quickly noticed that the place was full of Team Aqua members. I talked to all of them and checked out some of the exhibits before heading upstairs. I met Stern up there and talked to him, but then some Aqua people approached us and I had to battle them. After defeating them, I met Team Aqua's leader, Archie. Aqua left shortly after that.

With that finished, I began walking to the exit of the town. Before I could leave, though, I noticed something going on by the contest hall. I went over to see what was going on and met Lisia and her Altaria. She told me all about contests and gave me a costume and everything. I decided to try a contest, so I entered my Snorunt in a Beauty one. It didn't do too well in the first round since its condition wasn't great, but it did very well in the appeals and placed first overall. After that was over, I received the Cosplay Pikachu before leaving.

I went out to Route 110 after that. I soon came across the Trick House and went inside. There, I did the first puzzle, which mostly involved using Cut to get around. Once that puzzle was solved, I went back outside and will now continue to Mauville.
>> //

I just caught a timid taillow with boomburst. Just wow. This is like every trainer's perfect region.
Ranked Number 922 Globally in the April Friendly Competition!
& Ranked 417 in the U.S.A!​
K

I just beat the delta episode #rayquaza4eva, well time 2 catch some legends and make my dream team.
Zinnia was weird in this game. but i think they confirmed another event cause Steven mentions a man with a black charizard.
Theres a little thing your Dad says where u moved from but i wont spoil that. Good luck on your gyms guys.
Friend code:3969-4581-6677
I hate rocks
B

Killermagikarp said:
I just beat the delta episode #rayquaza4eva, well time 2 catch some legends and make my dream team.
Zinnia was weird in this game. but i think they confirmed another event cause Steven mentions a man with a black charizard.
Theres a little thing your Dad says where u moved from but i wont spoil that. Good luck on your gyms guys.
Click to expand...

It has been known that your character is from Johto since the original games, if that is what you are talking about, that is nothing new.
I am capable of manipulating matter on a subatomic level by speaking. A mere flick of my finger is sufficient to alter the gravitational pull of the planet. I shelve physics texts under "fiction" in my personal library. I consider the Laws of Thermodynamics loose guidelines, at best. In short, I am grasping the reins of the universe's carriage, and every morning I wake up, look the heavens and shout "Giddy up, boy!" You may never grasp the complexities of what I do, but at least have the common courtesy to feign something other than slack-jawed oblivion in my presence. I, sir, am a wizard, and I break more natural laws before breakfast than of which you are even aware.
-Vaarsuvius, Order of the Stick. (with all due respect to Rich Burlew)
A

CharizardFan09 said:
does anybody know how to slowly approach the pokemon that come out of the grass so they dont run away
Click to expand...

I picked random Berries outside of the Pretty Petal Flower Shop and entered the building. I received an Oran Berry and a Wailmer Pail from the staff there, then I walked back outside and wandered to the tall grass behind the shop and found a Poke Ball and Super Potion. I wandered east afterwards and defeated a Lady and a Lass trainer nearby next, then I walked ahead towards a bridge and slayed Twins and their Lotad and Seedot in a Double Battle. I picked a few Oran and Cheri Berries after that and arrived in Rustboro City at long last. I saw my pal Brendan as soon as I arrived and I was shown to the Rustboro City Gym. I then ran to the PC and then to the Poke Mart where I received the False Swipe TM.

Started my game. Got Mudkip, named him Mikau, after the Zora in LoZ: Majora's Mask. Caught a bunch of Pokemon via sneaking, including a Zigzagoon that stupidly only knew Charm, Growl, and Tail Whip. Soon after I caught that Zigzagoon, and after I caught a Ralts... I went up against another Zigzagoon while I was training my Ralts. The wild Zigzagoon had low HP, and then I told Ralts to use Confusion, and then... THE ZIGZAGOON USED ROCK CLIMB. RIGHT BEFORE IT DIED. I could've had a Rock Climb Zigzagoon, but nooo, I just had the one with no damaging moves. I found out afterward that the DexNav would've showed their moves.

At Rustboro now, and caught a few more Pokemon. At one point while trying to level Phineas, I ran into a Skitty that decided to be as annoying as possible and just wouldn't die, so as punishment, I caught it and named it Buttmunch.

just defeated Tate&Liza and oh man their intro was AWESOME! But their battle was really easy... sign... I wish they had Emerald team... 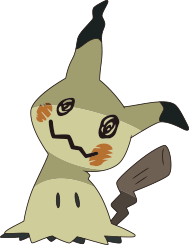 My name is Mimikyu, a loney mimikyu
C

As said in the In-Game team discussion thread, I am running 10 pokemon on rotation: Mudkip, Cottonee, Buneary, Beldum, Croagunk, Electrike, Honedge, Scraggy, Swablu, Ralts.
I'm kinda playing it like and Orderlocke where I have to use them in that order and cannot switch, but I just rotate when one faints instead of boxing forever. Also have a no healing policy, both potions and nurse joy and banned.

Currently at the Trick House now and only Mudkip has evolved. I kinda expected to overlevel with the exp share but that's not really happening, maybe because of my rotation.

I'm really loving DexNav and Trainers Eyes. And also contests. Hoenn Contests are the best contests ever, it was the only one I actually played. That being said, I lost my first Normal Rank contest.

I've had the last few days bed ridden so I've been playing fairly frequently (I picked up OR online and AS in physical form so it isn't here yet).

It has been amazing rolling around with my Mudkip, Gardevoir and Camerupt destroying basically everything. I just finished saving the world from Groudon and finished the final gym. So now I am taking to the air with the eon flute! So far in my flying around, I've picked up a terrakion and a misprit (who took a million balls to catch!). I'm on the hunt for dialga at the moment, so misfit the mesprit is in my party to help me look.

I restarted, and chose Torchic this time. I was originally going to go with him, but then I chose Mudkip, but now I want to use Blaziken. I got an Adamant Torchic after a few SRs, and I'm currently collecting Ralts with Synchronize to make it easier to pass natures onto my team members I will catch

I've battled my way up to Mauville City and I've gotten a Mach Bike! So far my team is: Combusken, Dustox, Vigoroth, Mightyena, Taillow and Zigzagoon. I'm going to do some exploring while in Mauville then take on the Gym Leader!

I'm absolutely loving this game so far It is so much fun, DexNav, AreaNav ect is amazing!
​
A

I spent quite some time grinding on the cycling road route as I remembered always having difficulty with the fight against May, but I ended up sweeping her team with just one Pokemon. During my time grinding I evolved both my Ralts and Poochyena, along with a couple other Pokemon I had in my team to help complete my dex quicker. I deposited Kirlia into my PC since from what I've read it seems you can't get a Dawn Stone until just before in E4, so I guess I won't be using a Gallade in this playthrough. I found a Lv. 21 Plusle with Discharge and 3 stars potential too, but I don't know if I'll put her on my team or not.

I also made it to Mauville and proceeded to spend a good ten minutes being completely lost and unable to find the Pokecentre. But once I picked up the bike I backtracked to Granite Cave to finally catch a Sableye, and then I deposited my Wingull since I knew she'd have trouble in the 3rd Gym. Right now I've just arrived at Verdanturf Town, I'll take a quick look-around before heading back to challenge Wattson. I bought Alpha Sapphire last night and I love it! I chose Treecko as my starter. I'm currently in Dewford Town looking for Steven.