First note: This is designed for 1v1, to clear any confusion
I am a huge fan of Fire elemental stuff, and defensive or balanced teams are all I've ever been comfortable with. I decided to try a Sun theme team, largely as it just suits my nature.
After being horrifically massacred in just about every PO matchup and my best "win" being a 4-0 loss, I came to realize: I'm still a noob.
A few issues kept cropping up, the majority being of which were caused by me stubbornly staying in and not switching around much. But since that's an experience related issue, you guys can't help much with that

Now, for the actual team.
I like pokemon that can take hits and dish them out, and while any weather team has access to good tanks (hydration Vaporeon, Cradily, Reuniclus, ect) Sun just feels natural to me.
So, bantering aside, the meat of this RMT: The essential lifeblood of any OU Sun team, Ninetales acts to clear the skies for beaches, riverside resorts, and scorched battlefields alike.
Overheat+Power Swap works so that I can spam Sun+STAB boosted Overheat almost recklessly while crippling any ballsy Special attacker or booster that may come in *cough Latias* and makes the crippling side effects almost a good thing. And switching a -4 Sp. atk for a +1/+1 from Latias is almost cruel. Almost.
Will-o-Wisp acts as a way to wreck Ttar as best as the poor girl can without a NP+Grass Gem boosted Energy Ball.
Although heavily offensive, she also acts as a crippler of sorts. The EV Spread seems odd and could probably be improved, but it allows her to take some hits while Overheat certainly isn't lacking in power.
Originally I tried a SubDisable gig, but found that HP bar dropping too fast to justify the admitably amusing moments of disabling Hydro Pumps and Earthquakes. But mostly I missed Will-o-Wisp. 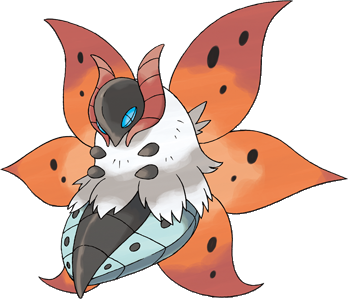 I hate Game Freak for many things, but this hell-spawned moth is enough to forgive most of that. Volcarona acts as a setup sweeper, using his fair enough type coverage, impressive stat distribution, and of course Quiver Dance to decimate what he can, preferably late game. This is, beyond any doubt, one of my favorite pokes this gen and is really a lot of the reason I built the team.

Volcarona takes on Grass and special based Fighting moves as best it can, and the EV spread is to attempt to balance his defensive quailties as a somewhat bulky sweeper while still packing some initial prowess. And yes, its the same Nature/EVs as Ninetales. It wasn't intentional, it sort of ended up that way...

The Item, I will definitely take advice on. Life Orb is, to me, not a good idea on something I want to preserve as long as possible and is mauled by entry hazards. Leftovers and tweaking the HP to a Lefties number +1 (to avoid a 2HKO from SR) seems good to me, but again any advice is welcome :3

Simple, fast, and powerful. Latios capitalizes on the natural Steel killing power of the team to cause as much destruction as possible. He also acts to absorb Ground moves, which Ninetales does not fail to lure. Surf is a standard move on the Lati twins, but as you can imagine it doesn't work well in blistering sunlight. I decided to use Thunderbolt in its place to smash Water Types, nail Skarmory, and the Jellicent that switches in expecting Hidden power Fire. Hidden Power ground is used to check Heatran, who is obviously an issue, and because HP Fire hits targets whom are much better hit by my Fire types.

Psyshock is mostly filler. I tried Recover at first but found that I didn't get much time to use it and Latios' job is bruteforcing walls and causing pain. Psyshock nails a few pink blobs and Terrakion, who is really important to check as we all know what Terrakion is capable of. Memento, on the otherhand, could put Volcarona into a very real chance to sweep.

One very important note: this is a slightly tweaked set someone else linked to. As in, its not my original idea. Credit to the absolutely brilliant person who created it.

This thing is amazing. There's no other way to describe it.
Lilligant was chosen as it acts as a variety of useful things all in one decepitively lovable package. In sunlight with the given EVs, she hits 530 Speed, which outruns +1 +Speed base 111's and anything Slower (not that Scarfed Tornadus is common). Combined with a STAB+LO Leaf Storm, she hits almost as hard as Latios' Draco Meteor, which allows her to OHKO Politoed, Ttar, Hippowdon, Landorus, and nearly anything that doesn't resist it is going to regret eating it.
Because of Leaf Storm and the insane Speed, she is my revenge killer in addition to opening holes.

Sleep Powder from 530 Speed is a terrible thing to see. If your on the opposing side of course. Lilli also shuts down something dangerous, and even after firing off Leaf Storm she's still not easy to switch into and keeps pressure high. Aromatherpy is there to purge Toxic, Thunder Wave, anything I don't want bogging down my team and its lightning quick.
Hidden Power Rock slaps around Dragons and opposing Volcarona are quickly humilated.
Simply put: no issues here. She's hands down the MVP.

Strange though it may seem, here starts my problem: Entry hazards. I'm not good at preventing them, I hate dealing with them, and I really don't like devoting a team to utilize them. But its a necessary evil.
Tentacruel acts to check rain teams, spreading (and absorbing) Toxic Spikes they hate so much, causing a headache by shattering Sp. Def on non-Steel types, and burning what it can with Scald. Clear Body isn't a huge blessing, as Intimidate is hardly an issue. Liquid Ooze is amusing for Conkeldurr, but Virizion and Ferrothorn are not things I want to tank with this.

EVs are standard, outrunning Adamant Breloom (base 70) and retaining as much bulk as possible on the physical side to take Fighting and such better.
The obvious issue of Sun weakened Scalds is fine: its the Poison and Burn affliction that are the main focus. Also serves as my best Fire Sponge, I do not have a Flash Fire user on the team.

CB terrakion got its head smashed in by oh so many Lati@s with Psyshock, other terrakion laughed at a CB Stone Edge or X-Scizzor, Landorus viewed it like a speed bump, and generally it didn't work. Or I just suck, both are quite possible. My replacement was something sturdier.

Conkeldurr acts to check Terrakion, He Who Murders Sun, even in adverse weather (Lilligant handles it in sun, even Jolly Scarfed ones). Blissey and Chansey, who wall the hell out of all 5 special attackers on my team, are crushed like eggs beneath a concrete pillar and can't even scratch that big red nose.
The Moveset is standard Conkeldurr, simply because it works wonderfully.
The EVs are my own, at least. Conkeldurr has no problem dishing out damage, so I lowered his benchpress to two fully minivans and improved his Special bulk to take on Sun weakened Water types and a few others with better results.


The Issues:
>Lati@s. It crushes me unless my Latios catches it. My Latios gets forced out a lot and obviously he is able to be countered by himself and his sister all the same. Volcarona can take one good hit, but Psyshock varients destroy the entire team. Tyranitar is obviously not an option.
>Tentacruel. I used to run Vaporeon and Hitmontop in lieu of the current Tentacruel+Conkeldurr setup. He often brings in an Earthquake user, and God help me if they have Landorus. I can run Ice Beam, of course, but I'd need to rearrange the EVs and the whole moveset, not sure.
>Heatran. Especially Air Balloon Heatran. Hated that pyromanical toad since the release of DPP. Conkeldurr can take one near fatal hit thanks to the bulkier spread, but he simply can't recover the damage. I have Mach Punch for scarfed varients, Latios can take it if the balloon is popped.
>Ninetales gets battered down too easy, and I tend to lose the weather war. Not completely devastaing, as only Lilligant is actually Sun dependent.
>Trick Room. No Taunt to stop it, no way to stall it.
>Reuniclus. Especially with Trick Room. Psyshock adds in the last nail, making sure Volcarona can't switch in.

Images tend to show up me for but others can't view them. Its perplexed me for awhile now.
Any feedback, radical or subtle, is much appreciated.
If I messed up format, let me know and I'm happy to fix.
And thanks for reading, I hope I included enough to work with.
RNG Reporter is not a hacking device.
P