According to this, Kengo failed to be a possible Hikari's partner. The way his Pottaishi made a dirty trick on her Pochama just for fun (it was neither Fukamaru's imperfect draco meteor, nor Mujimaru's rivalry for Meloetta) reflected his continuous 'Pikari' insults and quite hurting childhood insults at the second Hikari's contest on a higher level of physical painful abuse. You might argue with Pachirisu kicking Mujimaru's scalchop far away in BW2, but it didn't bring any physical pain to Satoshi's Pokémon - I would compare it with Hikari's trick of going up in a balloon instead of running upstairs in the Space-Time Towers with Satoshi. So I can imagine Kengo as a possessive man, continuing to physically and verbally abuse Hikari, and, of course, she wouldn't be happy, only Kengo would be happy.

Serena has the much less chance to become a possible Satoshi's partner. The first reason is because her Pokémon barely formed bonds with his, concentrating more on Clemont's Horubee (Sylveon) and Harimaron (Yancham). Please compare them with the bonds between Satoshi's and Hikari's Pokémon. I will not enumerate all of them, they easily overwhelm bonds of his Kalos pokemon with Serena's. The second reason lies in the fact that Serena didn't behave like a loving mom for each of his Pokémon and Satoshi didn't behave like a loving dad for her Pokémon. In similar situations of a Pokémon worrying for its owner Satoshi preferred no physical contact with Serena's Fokko and Pancham, while he patted Hikari's Pochama's head. Besides, there were many moments when Satoshi and Hikari showed parental care of a dad and a mom for each other's Pokémon (continuously Satoshi - for Pochama and Eteboth, Hikari - for Gliger/Glion, Pikachu and Buoysel). In other words, if Satoshi and Hikari act as parents, who are they to each other? Pochama and Gliger were not easy 'children', and with all love for them, for the result of their bond (Buoysel and Eteboth), for the adopted 'child' (Hikozaru), I can't doubt that Satoshi and Hikari love each other, the bond is very deep. At the same time, I can't say the same about Satoshi and Serena. They lacked that parental care as well.
Last edited: Jan 18, 2020
History of Pearlshipping Author.
M 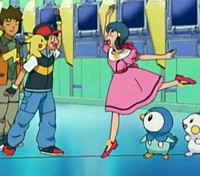 I have found an accurate proof that the high-fives Satoshi and Hikari made were veiled kisses. Their second high-five was the key. Indeed, there is a foot-popping kiss trope in movies, TV or photos when a girl puts her leg just like Hikari. You may read about it https://www.urbandictionary.com/define.php?term=foot popping kiss and see it https://www.bing.com/images/search?q=foot+popping+kiss&FORM=HDRSC2
Last edited: Apr 6, 2020
History of Pearlshipping Author.