On October 23rd, the Pokémon anime will begin its "Sword/Shield Chapter", which will explore the legends and secrets of the Galar region! A new key visual has been released 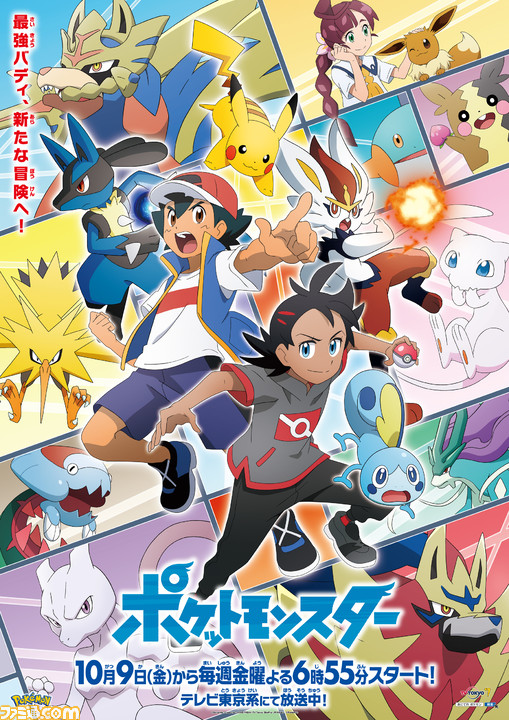 It was also announced that the "Sword/Shield Chapter", which will see Satoshi and Go explore the legends and secrets of the Galar region, will begin on Friday October 23rd and run for 4 weeks. We will now present a synopsis and selection of screenshots from this Sword/Shield Chapter. Make sure not to miss these story developments, which are unique to the anime?!

Pokémon that has grown gigantic are running wild?!
Satoshi and Go set off to investigate an incident that has taken place in the Galar region. And when they arrive, they see groups of Pokémon that have grown gigantic running wild! To resolve this crisis, Satoshi joins up with Dande, the Greatest of Them All, while Go tries solving the mystery alongside Sonia, who aims to become a Pokémon Professor. An organization that intends to bring back the Black Night, the disaster that struck the Galar region in the distant past, are working behind the scenes of this incident!

When all the mysteries are unraveled, the horrific howl of the disaster's return can be felt!
And as all of Galar becomes a site of chaos, two heroes wake from a long sleep.

We were also given details on an extravagant giveaway program taking place during the show for these four weeks, as well as on the participants of an online talk event that would take place over the same period:

The first new key visual has been unveiled! Extravagant voice actors and special guests will appear during an online "Pocket Monsters" talk event for 4 weeks straight!

It has been decided that the TV Tokyo anime "Pocket Monsters" will be moving to Fridays at 6:55pm starting Friday October 9th! A new key visual has been unveiled to mark this move to "Golden Friday". It has also been decided to hold an extravagant giveaway program during the show for these four weeks, as well as to give details on the participants of an online talk event that would take place over the same period!

The new key visual depicts Thunder and Suicune, as well as the legendary Pokémon that appear in the latest video games, "Pocket Monsters Sword/Shield". and hints towards upcoming story elements. In addition, the "Sword/Shield Chapter", which will see Satoshi and Go explore the legends and secrets of the Galar region, will begin on Friday October 23rd and run for 4 weeks! Believe it or not, the Lucario and Aceburn you can see on the key visual are actually...?! Make sure to pay attention to this story arc, which you just can't miss out on watching as it airs!

In addition, details on the first ever 4 week long online live talk event in Pokemon anime history have been made public as well! It's going to feature extravagant voice actors that provide the voices of popular characters that have become the talk of the town thanks to their appearances in the Pocket Monsters anime, starting with Satoshi's voice actor Rica Matsumoto and Koharu's voice actor Kana Hanazawa, but also including Kibana's voice actor Tatsuhisa Suzuki, Saito's voice actor Yoko Hikasa, and more! We've also prepared all kinds of segments,including a "lines I want the characters to say" segment the voice actors will try their hands on that will also feature members of the production staff like executive director Daiki Tomiyasu and sound director Masafumi Mima, comment videos from secret guests, and a riddle segment with Ryogo Matsumaru. In addition, during the 3rd and 4th installment, you'll get to enjoy exclusive commentary from the voice actors and production staff as the episodes air! Please make sure to follow this audience participation live talk that will also include an extravagant giveaway program! The event will be streamed live on the show's official Twitter and the official Pokémon Youtube channel.

Staff member
Moderator
(sorry, had to suddenly leave in the middle of typing this up so it got a bit delayed)

You get the feeling that the staff is very happy to have been freed from the Sunday timeslot and is celebrating with a big exciting story arc. I hope it's a sign of more focused storytelling to come!
;254;
K

Nice, but still feels rushed and random without much building. Also they cant do much more then the games lore gives them, which isnt much.
Love and be loved! Shower the world with kindness

Although I like that it is only 4 weeks, all this goes very fast hahaha

Y'know what, I've decided that I am ok with this. SWSH didn't exactly have a villainous plot. Just some guy who didn't think things through, his worst crime being abandoning his adopted kid. And Rose was pretty polite about everything, even calling to inform us that he had a little oops moment with Eternatus. Rose doesn't kidnap anyone, doesn't attempt murder, he just gets impatient. And it's not like with Lusamine where he could get mind controlled. Though, I do have to question where the plot will go from here. Maybe they'll do what BW did and bring in a legendary for a while? Like maybe Kubfu will get an arc.
Keeping this signature up until either a third game to the Pokemon Colosseum series is announced or until a main series game is extremely similar to it.

Will there be a possibility that they will arrive on Galar on the episode before the 23rd?
W

Koharu with an Eevee is the highlight of this for me, and I’m intrigued for Drakovish.

Super excited about this. Can't wait to see first main arc of PJ.

They're doing this already? I know that last generation, they went through the endgame of Sun and Moon during the first third, though I knew that was because the second was gonna include Ultra Sun and Moon's endgame. Also, look at all those legendaries on the poster. Mewtwo, Suicune, and of course, Zacian and Zamazenta. Makes me wonder a couple things. Is Goh gonna try to catch Suicune? And is that Mewtwo the original, the one from the 16th movie, or a new one?

Zapdos is appearing in episode 40.

Suicune, Mewtwo, Dracovish are probably event pokemon. I don't see how they can fit another fossil discovery into the arc, though Suicune may just represent the observatory special.

Mew is Goh's goal (though it would be awesome if it appeared in this arc), and Rocket has Morpeko.

Marshtomp is surprising because it isn't a pokemon that seems popular enough to be an event.

Female Eevee is popular enough to be an event (I don't think that one has appeared in the anime before), though Eevee would also work well as a house-pet for Koharu.
U

I just thought of an Eevee and Chloe's Yamper playing with each other then sleeping next to each other then my heart melted.
Keeping this signature up until either a third game to the Pokemon Colosseum series is announced or until a main series game is extremely similar to it.

Ace-Barn said:
though Suicune may just represent the observatory special.
Click to expand...

It's not. Those are barely-marketed obscurities that have little connection to the TV series.

I’m looking forward to this. By the big celebration they’re throwing for the arc, the staff seems to be as well. I could see this segwaying into the second “season” or part of Journeys, with hopefully more arcs and less episodic focus (though they seem to steadily be doing that recently). While I don’t think the Sunday timespot was completely hindering them from not being episodic - I don’t think they’ll totally stop being episodic either now- I agree that Friday is just a more optimal time for them. That could maybe influence some of the writing decisions in the future.

The most I want from this is at least some sign from Grookey and for Ash to catch Dracovish. I wonder if we’ll see GMax Garbodor and Copperajah from Oleanna and Rose respectively

The fact that Rose hasnt spoken since PM27 is already concerning. I guess Raboot and Riolu will evolve during Eternatus battle and Gou catching Grookey in the forest where Zamazenta and Zacian are located.

I guess they really want to get rid of it as soon as possible. I hope they have stuff for the 2nd year unlike SM.
Last edited: Sep 20, 2020
Love and be loved! Shower the world with kindness
U

I wonder if this'll be the end of "Ash hearing/sensing things" plotline. I hope not because not only would that be rushed but I don't think they can end that in a proper fashion in just a few episodes. Besides, it satisfies the desire of many fans to see Ash gain something cool without making him overpowered.
Keeping this signature up until either a third game to the Pokemon Colosseum series is announced or until a main series game is extremely similar to it.

Really looking forward to this, I hope this just sets up a future arc not just finishes it right way.

There’s no reason to stretch what little plot swsh has, this is ideal imo
To right the countless wrongs of our day, we shine this light of true redemption, that this place may become as paradise. What a wonderful world such would be...

Soniman said:
You get the feeling that the staff is very happy to have been freed from the Sunday timeslot and is celebrating with a big exciting story arc. I hope it's a sign of more focused storytelling to come!
Click to expand...

This was obviously planned since the beginning though, sure maybe they also planned to switch timeslots by this point all along but the idea that they literally felt restricted by it when SM just had the longest arc in Pokemon like ever feels silly to me. I still think the producer mainly said what he said to reset people's expectations to normal BECAUSE of said long SM arc coming right before this series started, episodic with an occasional arc like this is most likely still the way going forward. As long as they dedicate a comparable amount of time for the final battles as they did with the Alola league I'll be good.
My webcomic, "Dandelion": http://rohancomics.com/ (my avatar is the main character)