Defeated Roark not too long ago and obtained the Coal Badge, for now the full party Exp Share isn’t too broken with my levels roughly on par with his when I fought him. Unlocked Mystery Gift early so I can redeem the Manaphy egg, having the pedometer app in the Poketch makes it easy to keep track of the steps needed to hatch it. Also picked up Jirachi and currently at Valley Windworks to obtain the remaining member (Shellos) for my rotational team.

Edit: Make that my second-to-last member, still have the Clefairy line to go.
Last edited: Nov 21, 2021

Yveltal91057 said:
None. I’m waiting until Christmas.
Click to expand...

You have something good to wait for

So my nickname theme this time around is Verbs. All Pokémon are named after a verb that well describes them, at least in my eyes. So far, my team includes:

This team will definitely not remain this way for long. lol

Tsukuyomi56 said:
Defeated Roark not too long ago and obtained the Coal Badge, for now the full party Exp Share isn’t too broken with my levels roughly on par with his when I fought him.
Click to expand...

My Chimchar, Bidoof and Zubat had fallen to Geodude with Rolllout Chimchar only had power-up punch and zubat had absorb. When Onix my shinx was doing chip damage on onix. After he used a super potion on onix and several binds later...while i was used bite with shinx and potions myself the snake faints.

One of the few buneary encounters there had ice punch. Havent done a proper ev training until I get desired ones and unlock the areas. Gonna be 2 or 3 days there...

Heading towards Veilstone City! I'm really enjoying these games so far!
My current team is:
Prinlup
Kadabra
Luxio
Staravia
Ponyta
Clefairy (might switch it for a Skitty)

Pokémon permanently banned from my playthroughs of BDSP

I finally got my Budew to like me, and she evolved. My team has been greatly reduced now, and I'm hoping to add Spiritomb in the coming days.

Decided to go on a solo pokemon run through Diamond using Chimchar. Session one ended in Floaroma after sweeping Roark with ease. Session two is going well so far, encountered a shiny Zubat in eastern entrance to Wayward Cave. Caught and boxed it. Currently at level 28. Died once so far and that was in Eterna Forest when partnered with Cheryl. Had a close call or two since that... But going well so far!

An00bis said:
Just watch; there will be an egg at the end of Sinnoh that Dawn will give to Ash!
Click to expand...

Tsukuyomi56 said:
Defeated Roark not too long ago and obtained the Coal Badge, for now the full party Exp Share isn’t too broken with my levels roughly on par with his when I fought him. Unlocked Mystery Gift early so I can redeem the Manaphy egg, having the pedometer app in the Poketch makes it easy to keep track of the steps needed to hatch it. Also picked up Jirachi and currently at Valley Windworks to obtain the remaining member (Shellos) for my rotational team.
Click to expand...

The EXP Share seems to be different here than in Sword and Shield. Each Pokémon gets less EXP than they used to, so while everyone gets EXP, the leveling seems to be at about the same rate as the original games.

The first time I played this game in the evening, I encountered a shiny Geodude and almost ran because I thought it was the evening light making it look orange.

nel3 said:
I'm rather happy the EXP share doesn't shut off. It makes things easier to handle for wild Pokemon and trainers. Apparently when the difficulty jumps up, you'll be happy it's there.
Click to expand...

And for those who don't like it, they can put all the pokemon they don't want to train yet back into storage while training one of their pokemon without needing to go back to the healing center. It's a bit tedious, but at the same time a nice thing to have. It

Also, it does seem the EXP share is better balanced

After flipping a coin, I decided to catch another Budew and found one with a better nature. I also managed to level up my Kricketot and evolved into a Kricketune, as well as teach it Rock Smash to survive against Roark

Continuing the trend from my SWSH & Y playthroughs, I’ve been nicknaming all of my pokémon after Japanese athletes &/or stuff related to sports 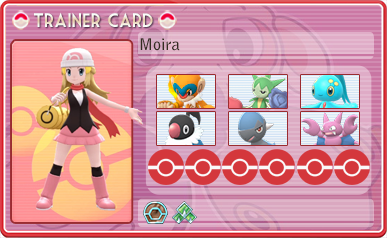 Name: Moira MacKay
Hometown: Postwick, Galar
Location: Solaceon Ruins
Status: Jist fought this weird Unown that could talk.
He said the Diamond Ball's charged up 'n his boss would be seein' me soon :\

My team at the moment:

Got a Magmorizer ready for my Magmar. Still looking for a Shiny Stone.
I collect Love Balls. PM me if you have some for trade.

I just got through Eterna Forest, but I traced my steps back to grow out an Oran Berry tree.

So, my team turned out to be a bit different than I had planned after finding out Tangela and Eevee are postgame only and I didn't feel like using Gastrodon. I still want to use Pokémon I've never or barely used before.

Current team is Monferno, Murkrow, Magneton, Finneon and Gligar. Hoping to add Carnivine to it as well.

Just reached Veilstone, checked out the clothes shop and decided the most expensive one is my fave so I'll be saving for that now. Haven't tackled the 3rd gym yet though, instead went to the route to the south.

I also love the underground as everyone else seems to do. Probably my favorite side activity in a pokemon game since, well, the original underground. I'll try out contests later but I wasn't really interested in them in gen 3 and 4 nor in the gen 3 remakes so I'll see how that goes.

I got my copy of Shining Pearl on Friday, and played through some if the early game yesterday with Piplup as my starter, and Starly and Budew as my other team members. Bude is actually pretty useful with Stun Spore and the Poison Point ability.
Then I got to Roark. Lost FIVE times in a row. Deleted the save file and now I'm leaving it for a few days until I try again with Turtwig as my starter. I've played the original Diamond, Pearl and Platinum, and I never remember Roark being as difficult as he is now. That Cranidos is just disgustingly hard for early game.

Doing a nuzlocke run for my first time through this game. I only just lost my first Pokemon almost 7 gyms in (RIP Rapidash, lost to a OHKO Mirror Coat from a Lopunny).
I'm genuinely surprised with the move sets these trainers have for their Pokemon! For example, the two kids with the Abra in the Trainer School having Charge Beam nearly ruined my run at the beginning, and most of the gym leaders' ace Pokemon make me sweat and make me have to really plan out my actions.
The EXP Share feels very balanced, which is greatly appreciated cause I didn't want it to be too easy, but not so annoying where I have to train one Pokemon for hours.
Current team:
Been very fun playing through so far. Looking forward to finishing the main story hopefully tomorrow and seeing the post-game stuff and messing around in the grand underground more (I'm surprised at how addicting that is).
MyAnimeList