Staff member
Moderator
This thread is for posting anything regarding your game's progress.

Think of it as a journal -- from defeating Gym Leaders, finishing the League, completing the Galar Dex, Shiny hunting, camping, making curry, completing your wardrobe, etc.

.: IF YOU HAVE QUESTIONS ABOUT THE GAMES, PLEASE CHECK THE [MAIN SITE] FIRST :.​
​

Been having a lot of fun. Only have the two gyms left. I actually feel bad for bede lol. Poor guy. The game is stunning! Absolutely stunning! And team yell isn't that bad as i thought it would be

I started Sword and am playing as a girl named Twiggy. My main nickname theme is models/actors/actresses names and so far have Tyson the Scorbunny, a Rookidee, Gigantamax Meowth, Blipbug, Galarian Zigzagoon, And Skwovet.
"Hey! Don't pawn your trash on me!" Watchy Watchog

Just made it to the Wild Area. Doing some grinding before I head to Motostoke. 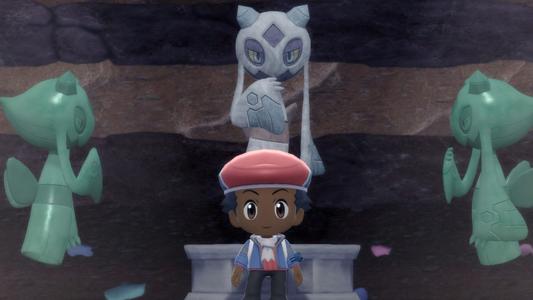 I just got my first hour into the game. I chose Grookey as my starter and I think(?) I caught all the available Pokemon on Route 1? Choosing Grookey seemed to make the start of the game harder due to its weaknesses to some of the early route Pokemon being bugs and birds. Wooloo's Fluffy doesn't help either, nor does Skwovet and its Oran berries + cheek pouch.

Although Ayla may be adorable, battling continues to prove to be not her best thing...
Last edited: Nov 15, 2019
All hail the Kalos Queen, Serena! <3

Here is my team from my pokemon shield nuzlocke so far. Currently at route 2.
D.K the Grookey- lv9.
Erza the Rookidee - lv8
Nami the yamper - lv7.
Fought a lv7 rookidee that had yellow aura and had sand attack. I presume its a egg move?

Get slapped boi.
B

but let the games begin. Picked up sword a little after midnight est and played for about an hour and half because I had to work today.
Reset 3x for grookey with right gender and nature. Settled for naive, I’ll breed an adamant one later in the game
Beat hop. Did anyone else get a critical hit on the first attack? Was funny to see Hop cry out what kind of beginners luck was that?!!
Did some grinding and early team building on route 1 before heading to bed. Can’t wait to pick back up again after work

Started this morning.
Right now hanging out on route 2, I got lucky with my Scorbunny's nature as it's a natural one. I also caught a modest Blipbug so that's great.
Currently party
Scorbunny -Bugs
Blipbug-Metabee
Yamper-Lacey
I had a corgi named Lacey and she passed a few years ago.
Switch Friend Code: SW-1653-4607-0412
Favorite Pokemon:

If its your birthday, the pokemon center will do a short celebration and display a birthday cake behind the counter!

Started my adventure a little bit ago.
Chose Sobble but I wanted a female one so I decided to reset, but it only took 1 reset to actually get one which was pretty funny.
Caught everything that was catchable on routes 1 and 2.
Current team consists of Sobble, Skwovet, Wooloo, Rookidee, Nickit and Yamper. I'm not planning to keep using the majority of them though, so far I'm only gonna keep Sobble and maybe Nickit. I don't want my first team to be generic "regional bird, regional rodent"-like

I have enjoyed the game so far, despite all the negative things I’ve said about it this year. I’ve played 6 hours and only on route 3 and yet to reach the first gym leader hahaha. I’ve spent most of my time exploring the Wild Area, catching random stuff, doing Dynamax battles, designing my outfit and perfecting my trainer card!

I realize I’m over-leveled. It’s hard not to be. Even the bloody curry gives you Exp. The game is fun and looks pretty. I like all the TMs and TRs. Glowing powerful Pokémon are cool. Still not happy about Dexit, move cuts, subpar graphics in the Wild Area, the easiness of the game so far, and the lack of buffs for older pokemon. Also, shiny Pokémon should be shiny in the overworld. But the game is still an enjoyable experience so far.

I have arrived at Galar! Wonderfull place to stay. Met my neighbour Hop who introduced me to his brother, Leon. He seems to be the champion of this region. I'll take him on, no doubt! He introduced me to the starters of this region. Sobble is my man! Caught a Rookidee in route one. Met with Sonia and the professor. After a second battle with Hop, we both found a wishing star! The Professor gave us a Dynamax Band, where I've put my Wishing Star in. Leon gave us a letter so we can take on the Gym Challenge!
Took the train, and travelled through the Wild Area on to Motostoke City! Registerd myself for the Challenge. The man at the counter made me pick my number. Took the nr 4. My favourite number. He told me to rest in the Hotel Arriving there, some shady fella's were standing there and challenged me to a battle. Those Yell people sure have a big mouth. Met another Gym Challenger in Marnie.
Went into the stadium. Geez, that's something! All the gym leaders were there too.
Now I'm off to the first Gym!

4 out of 5 are the 'mons I set up as my team in the teambuilding thread, meaning I'm pretty much almost done in regards to my early-game team. I just need my grass Pokemon the finish up the synergy triangle I almost always go with and I'm good until later.
Last edited: Nov 15, 2019

Haven't put the game down since i got it, am currently on route 5. Still going with my planned team, though i used a number of pokemon early on since most of my team members are rather late.
Currently i have Toxel, Drizzile and Eldegloss. With only the first 2 being permanent members of my team.
I ended up spending some time resetting for the nature i wanted (especially important for toxel) , first time ive done that

Am absolutely loving this game, it's so damn pretty The animations for the pokemon bring them to life so well. Toxel especially is the most adorable thing ever.
~~~~~~ Sword & Shield ~~~~~~

Continued my adventure via route 3. Took me a while to find the Sillizepede I wanted. After quite some time I finally caught one! Continued my way through the mines, where I encountered another trainer who is completing the Gym Challenge. Easily defeated him an Sobble and Rookidee evolved. On route 4 I've caught a Meowth made of pure steel!
Then I met Sonia on the hillside who told me another story about The Darkest Day.
Then I went to the gym, had to do some kind of trial first. Was not that hard. Then I fought Milo for the badge. Corvsquire and Silizzipede took care of him easily. Now Sonia wants to talk to me again on route 5...
Team
Drilizzle lvl 20
Corvsquire lvl 20
Silizzipede lvl 19
Meowth lvl 18
Current Status Sarefan:

Currently just about to leave Motostoke after having participated in the gym challenge ceremony. I have two of my current planned team members, Grookey and Rookidee. They are levels 15 and 13, respectively. I've caught 12 other pokemon on top of that and even level-grinded some of them. Got Ayla's hairstyle changed to Long and Straight and gave her doll-eye extensions.

Finally, I created a new League Card!
All hail the Kalos Queen, Serena! <3

Just did the opening ceremony in Motostoke! Off to hopefully do a gym soon!

Team at this point is..

There may be balance issues.

Oh, how fun Sword is so far. I wish there were a tad few less scenes of Hop/Sonia/etc. guiding us places, especially places that are super close, but overall loving this game so much! I've been taking it slowly so far and catching one of each species that I come across, even old species. I would love to fill the Dex without transferring this time. Right now, I've finished up in Motostoke City and am on Route 3 heading to the first gym!

Thwackey, Rookidee, Nickit, and Wooloo will most likely be on my final team, but for now I'm carrying Yamper and Skwovet until I find others that I want, such as Frosmoth. (Also carrying them so I can evolve them and register their evolutions in the meantime.)

I have been playing Shield since around 10 this morning, and I have learned a few things in my journey.

Sizzlipede looks like Charjabug when it first appears in an encounter.
It is sometimes worth it to try for a Pokemon with a low-percentage appearance rate. Same goes for decent natures (but I already knew this).
That trainer with the Salandit in the Motostoke gym is a jerk.
Galarian Stunfisk is more useful that I thought it would be.
Motostoke looks impressive, but is not actually impressive.
Probably some more that I am forgetting.

Anyways, I have been rotating the Pokémon I have been using, but I have been trying to get my planned team. So far, I have Drizzile, Corvisquire, Centiskorch, and Impidimp. I am currently done with the Motostoke gym and am now doing some training in the wild area. I plan on continuing to the next city soon.
Switch Friend Code: SW-1726-2462-3514
New 3DS Friend Code: 2423-5573-9673
I have claimed Malamar and Mario Kart 8
National Pokedex complete - Gen V /all Gen VI / SM / USUM
Shiny Count: 250+
Shiny Clauncher Magnet​
You must log in or register to reply here.
Share:
Facebook Twitter Reddit Pinterest Tumblr WhatsApp Email Share Link
Top