I quickly lost interest in the current games so I actually went back to playing USUM. Crazy thing is I had lost interest in these games a couple years back. Didn't even make it to the first trial before i quit in 2018. Hadn't even did most of the post game in S/M. Now i'm playing them all frequently now. Might as well before Nintendo plans to shut down the online services for the 3DS.

But I've noticed while Wonder Trading that i'm getting quite a handful of priced LV1 Pokemon from Japan. And I'm mostly getting trades from there too! I guess that means alot of people here in the U.S stopped playing the Gen 7 games altogether. I recently got a LV1 Cyndaquil with Reversal/Double Kick/Flare Blitz/Extrasensory

Pokémon Sword: After taking a break from the main story to EV train my team and some other Pokémon, including leveling up my Flapple so he could catch up to the rest of the team, I finally went to check what was going on with the mural, and saw Bede trying to destroy it. Had a battle with him, and afterwards, Rose showed up and had Bede disqualified from the Gym Challenge. The mural fell apart, revealing two statues, revealing more of Galar's history for Sonia to investigate. Went through Glimwood Tangle, eventually reaching Ballonlea. Explored the area, before going to challenge the gym. Met up with Marnie, before going in to take on Opal's gym mission. Cleared the mission, and fought Opal. Won my fifth badge, as well as another TM and uniform. After it was all over, Opal and I headed back to Hammerlocke, where we met up with Bede again, and Opal decided to recruit him as her successor for the Fairy gym.

Pokémon Shield: Like in Sword, I finally advanced the story by going to the mural to see what was going on. Saw Bede trying to destroy it, had a battle with him, Bede got disqualified from the Gym Challenge, and the statues got revealed. Went through Glimwood Tangle, got to Ballonlea, explored the place, challenged the gym and got another badge. Opal and I went to Hammerlocke, where Opal decided to recruit Bede as her successor.

I defeated all of the Gyms including Raihan. I’m actually surprised what Pokémon took him down tbh. I managed to take out his Duraldon by Dynamaxing my Hitmontop and using the Max Knuckle version of Low Sweep to whittle it’s health to about 1/16 of its health. It KO Hitmontop And I was left with a level 34 Pawniard that was absorbing hits for awhile. I managed to KO Dualdon with a Sucker Punch and that surprised me given how underleveled Pawniard was.
"Hey! Don't pawn your trash on me!" Watchy Watchog

started off with Replacing Nightwing with a Bergmite named Cube. One Rare Candy and he was an Avalugg. As i went back to Route 8 to train him up, i eventually ran into a Darumaka. So I named it Spyro and replaced Cube. Evolved Her, and fed her 9 rare candys to match everyone else. Then it was time for Raihan and the last gym. Easier then expected if i'm honest. Spyro and Shellbert handled the Rain Trainer. Shellbert and Ruby had the Sun Team. Finally Ruby and Spyro fought the Hail Battle. For Raihan i used Spyro for the Dragon's and Shellbert for the Rock and Ground types. Luckily his G-max Duraludon targeted Shellbert mostly, so Spyro could Ice punch it to oblivion. Wasn't until i got to Route 10 that i figured out why Snom wasn't evolving, but it was to late by then. Route 10 is also where i got my first Copperajah Curry with the NPC camper Tristan. Also managed to find and catch a Duraludon alot quicker than other 1-5% pokemon on other routes. Since it's taken me two months to get here i was in a hurry to finish the Main Story, so instead of exploring Wyndon i headed straight to the Stadium. Accidently Gigantamax'd Quackson against Marnie's Liepard, but Dumbo managed to OHKO G-max Grimmsnarl with Iron Head anyway. Hop couldn't do much since im 8-10 levels ahead of him. The whole Macro Cosmos thing was Quackson vs the world, until Oleana. Had to Dynamax Angel against Milotic because of Aqua Ring/Recover. Then Dumbo handled the G-max Garbodor, like the Gigantamax slayer he is. Dumbo also swept through Bede's team back in the League Finals no problem. Facing Nessa Quackson handled everything, but Pelipper. That was Angel's job. Stuggled against Bea since half my team is weak to fighting types. Eventually managed to handle her with a few Pyro Balls. Got caught off guard by Raihan's Torkoal having Solar Beam. After Dumbo took care of it, i had no problem though. Turtonator only used Shell Trap against Ruby so i used the time to Revive Shellbert and Blast Burn to victory. Then Spyro got her time to shine and Max Hailstormed everything else to doom. With an assist by Superpower when Dynamax wore off.

Then Rose interrupted everything and we went back to Slumbering Weld for the Rusted Sword and Shield. Tried to level up my pokemon a little, but only so much i can do when they're 13 levels lower. Didn't expect the Battle with Rose in Hammerlocke, But all Steel types again made things easy. The Eternatus also went better than expected. Spyro survived a Flamethrower and almost OHKO'd it with Ice Punch. She got knocked out though and Angel had to land the final hit. Then it was basically an Interactive Cutscene when Zacian and Zamazenta fought Eternatus for me. Finally came the Championship fight with Leon. First time i've been underleveled for a fight since the first trip to the Wild area, i think. Regardless of level, Haxorus was still the only problem. Used Angel and Full Restores to stall Charziard until Gigantamax was over. Then Shellbert KO'd it easily.

Pokémon Sword: Last night, I took the oppurtunity to evolve my Galarian Linoone who was close to evolving in the Wild Area. Began making my way towards Route 7, when I ran into Sonia again and we heard a loud sound from somewhere. Leon showed up, and he and Sonia went to investigate, while I continued on to Chirchester. Had a battle against Hop on Route 7, before exploring it and Route 8, finally making it to Chirchester.

Pokémon Shield: Made my way towards Chirchester, had a battle with Hop and explored Route 7 and 8. My Ponyta evolved while doing so, before I finally reached Chirchester. Considering taking another break from the main story here and in Sword until I've managed to obtain a certain sixth team member in both games.

Finally completed the Galar Dex in Sword! So I went over to a hotel in Circhester and got my Shiny Charm. Did a few more battles in the Battle Tower with a competitive Alcremie I made from a Milcery I got during the G-Max Milcery event.

Found a Shiny G-Corviknight and failed to catch it. Cool.
I collect Love Balls. PM me if you have some for trade.

Rahus said:
Found a Shiny G-Corviknight and failed to catch it. Cool.
Click to expand...

I managed to fail both a shiny Ivysaur and a G Max Garbodor.
I'm a Greninja fan. Best Pokemon and Smash Bros. character.

While heading to the Den for a Mewtwo Raid, a Shiny Bounsweet crossed my path! Tsareena is my favorite Grass-type Pokémon. Couldn't have asked for a better wild shiny and immediately captured it with Heal Ball for aesthetics.
POKÉMON BRILLIANT DIAMOND | SWITCH: SW-0989 - 8583 - 3969
​

Fought three Mewtwos, lost every match due to bad partners. Is there anywhere on this site that gathers for Mewtwo raids?
I collect Love Balls. PM me if you have some for trade.

Finally got around to acquiring Shield. Picked the MC and chose Grookey as my starter. She has a Lax Nature but likes to thrash around so, I’m pleased.
I beat Hop and that’s about it for now.
On the Inside, I’m outside, all the time.

Got myself a Marshadow and finally completed the last piece of my living Dex. Finally claimed the original color Magearna! Love the IV stat distribution: 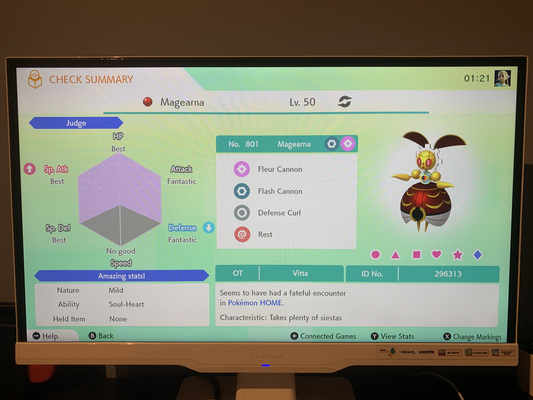 I think the most surprising thing about the meta is how less-prevalent Earthquake has become. People spam it all the time in previous metas. Here they use it fair amount of times but with the MAX ground move as an option to one-shotting specific Pokemon and the limited ground-type Pokemon you can use, not a lot of Earthquakes as I remember.

Caught a Shiny Ivysaur in a Premier Ball with Chlorophyll thia morning while looking for Orbs.
I collect Love Balls. PM me if you have some for trade.

Had a Sunday Pokéchill and raided a couple of Mewtwo. Finished the event at solid numbers of XL candies, Bottle Caps/Ability Capsules and shards. Checked Twitch to see if reliable streamers are online for raids and came across two hosting; one Steel, one Dark. I was lucky with my first captures and obtained myself three brand new shinies:

I'm just about done with the entire Living PokeDex for Pokemon Sword. I'm only missing two Pokemon at the moment, being Zamazenta and Type: Null.

My goal is to transfer all of my Pokemon to Home, restart Sword, get Type: Null again and Zacian, then trade Zacian for Zamazenta.

I don't see how I'll realistically get those two otherwise.
I collect Love Balls. PM me if you have some for trade.

Hatched Litten in sparkles at 428th. I bet you'd love him, @Ignition . Too bad he is Blaze, though. 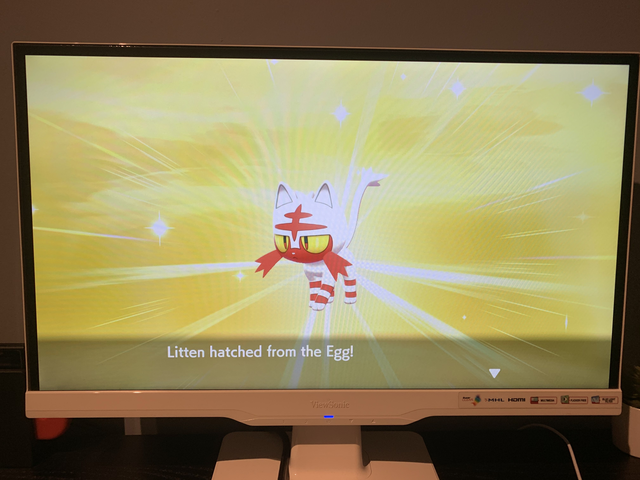 WhiteBlair said:
Hatched Litten in sparkles at 428th. I bet you'd love him, @Ignition . Too bad he is Blaze, though.

He’s amazing! Congratulations on the Shiny

Hope it at least had good IVs

Hey Everyone!
Im new here! been using the site for years but never the forums.
I am the artist in a Giveaway group for Pokemon Sword and Shield. We are trying to get out page known and out there, i personally do giveaways EVERYDAY at 9pm EST.