Rahus said:
Never heard of this. You're saying that if I make a team with 3 attackers and 3 Pickups, the pickups will find items?
Click to expand...

What I’m doing is having a preset Battle Box team so when the game asks you which to choose, you can use that. Then have 6 Pickups in your “actual”, on hand party so you’d still have your full battling team while having access to maximum Pickup benefits

Ignition said:
What I’m doing is having a preset Battle Box team so when the game asks you which to choose, you can use that. Then have 6 Pickups in your “actual”, on hand party so you’d still have your full battling team while having access to maximum Pickup benefits
Click to expand...

That works?!
I collect Love Balls. PM me if you have some for trade.

Indeed. Found a video that probably explains it better than I can

Ignition said:
Indeed. Found a video that probably explains it better than I can

That's nuts, mate. I'm glad you brought this to my attention because this makes farming for BP a little more worthwhile. Thanks for the tip!
I collect Love Balls. PM me if you have some for trade.

Pokémon Shield: Breeding the HA Corviknight I sent over from Sword, I finally got my sixth team member. EV trained her, while also leveling up a few other Pokémon. After finishing her training, during which she evolved twice, she was eventually caught up to the rest of the team in levels, and I explored Chirchester, including a few areas I forgot to check out in Sword, which I'll have to get back to later. Once I'd done all that, I went to the gym and did the gym mission. Once again, I made it through the gym, fighting trainers along the way, until I finally got to the stadium and had a battle against Melony. Got my sixth badge, a TM and uniform. Met with Sonia outside the gym, and went to the restaurant where we found another tapestry about the legend of Galar. Had a battle with Hop, and went to Route 9 to get the bike upgrade. I'll now return to the Wild Area to pick up some items in the places I can now access thanks to the Rotom bike upgrade.

Just finished a team of 6 Diggersby with Pick Up. Now, do they have to be level 100 to achieve the best drops or will level 92 work?
I collect Love Balls. PM me if you have some for trade.

Rahus said:
Just finished a team of 6 Diggersby with Pick Up. Now, do they have to be level 100 to achieve the best drops or will level 92 work?
Click to expand...

91-100 for the best items
https://www.serebii.net/swordshield/pickup.shtml

Ignition said:
91-100 for the best items
https://www.serebii.net/swordshield/pickup.shtml
Click to expand...

Well, I just wanted to make sure regardless. Thanks.
I collect Love Balls. PM me if you have some for trade.

Rahus said:
Well, I just wanted to make sure regardless. Thanks.
Click to expand...

No problem. And I added the link to show the items you get just in case you didn’t know. Didn’t mean to come off as condescending if I did

Pokémon Sword: Decided to progress the story just a little, so I could get certain items and TMs. So, I explored Route 9, fighting the trainers there and picking up all the items I could find, including a particular TM I'd wanted. After exploring everything, I discovered the main entrance to Spikemuth was closed off, but Marnie was willing to help me find another way in. I just had to beat her in a battle first. After our battle, Marnie allowed me to enter Spikemuth. Aside from that, I've mainly been training up some more Pokémon for the upcoming Online Competition and doing more Max Raid battles. There are a few TRs I hope to get more of.

Pokemon Shield: Like in Sword, I decided to explore Route 9 and make my way to Spikemuth. Along the way, I discovered a few things I missed while exploring in Sword, so I'll be going back for those. Had a battle with Marnie and entered Spikemuth. Like in Sword, I've been training up other Pokémon and such.

yay! I'm now Pokeball tier in doubles after clenching through the last 2 matches I needed (and almost blowing a 3-1 advantage in the first one, lol)
"Come aboard and bring along all your hopes and dreams! Together we will find everything that we're looking for...........One Piece!"

This new wild area event is awesome. Now I can farm up Shield exclusives.

The best part is that you get the Food Tins in this too, so I won't have to trade for those.
I collect Love Balls. PM me if you have some for trade.

I’m currently on my third “season” for my game, where I’m focusing on the ranked battles for SwSh & Go. I’m doing ok right now, though I’m kind of in a losing streak in the online competitions & now I’m in rank 4 for Singles. I’m also training for the upcoming speed competition by training my new Kantonian Rapidash I received through a Home trade. I was also lucky enough to catch a shiny Skuntank in a max raid the other day. I was debating on whether or not to box it, but now it’s a full-fledged member of the team.


However, I’m putting ALL of that on hold now because of the new Wild Area event. I’m making it my goal to farm as many Bach’s Food Tins as possible since this is finally my chance to get them!! 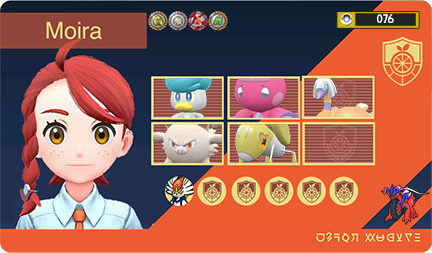 Finally found a Darumaka with a hidden ability in Max Raids to use for my next playthrough... and it turns out to be a shiny as well so I threw a Master Ball lol.

I did my first Max Raid in the new event today; a five star male Indeedee. It took a couple of attempts (my Shield team doesn't really have anything good against Psychic other than Megahorn on Rapidash and Crunch on Boltund), but I did eventually defeat it, and among the loot was a Bob's Food Tin and (FINALLY!) the right fossils needed to make Arctovish.

Update: I switched to Sword and beat two special dens, a five star Oranguru and a four star Gigantamax Machamp. That was the first time I'd found a Gigantamax den, but it wasn't as hard as I was expecting. The Oranguru was a little bit harder, because my Sword team has nothing good against Psychic either, but I still managed to clear them, though the loot drops weren't as good as the one for Indeedee.
Last edited: Mar 21, 2020

I spent most of yesterday catching HA Pokémon to offer for trades once this event is over & collecting Bach’s Food Tins. I managed to get an Escavalier & a Farfetch’d that I may want to add to my roster, but I’m not sure if I want to yet & I don’t know which one to use yet.

I also had two shiny encounters in my raid, the first was an HA Indeedee that got away, & the other was a regular Darmanitan that I managed to catch!! It has Gorilla Tactics, but I know that competitive players love that ability too
Sword/Go/IoA/CRY/CT/Y/BD-PLA/Scarlet League Card:

Pokémon Sword: Went to Spikemuth and began the gym mission, basically making my way through the town while challenging members of Team Yell. Marnie found out why the shutter was down, with Team Yell having tried to sabotage other challenges to help her win the Gym Challenge. I went to challenge Piers, the Dark type Gym Leader. After our battle, I got my seventh badge and a uniform, and Piers told Marnie that he wanted her to take over as the Gym Leader of Spikemuth after the Gym Challenge was over, only for her to refuse since she was still aiming to be Champion. After all that was over, I returned to the entrance of town and got a TM, before heading out to investigate a loud sound. Met with Leon on Route 9, who went to investigate it. Went through the tunnel, and met with Hop, who explained what had happened, and that Leon had dealt with the Dynamax Pokémon that had suddenly appeared. We returned to Hammerlocke, where I met with Hop, Leon and Sonia outside the Stadium. Magnolia showed up and talked about the connection between the Darkest Day and the Dynamax phenomenon for a bit, before she and Sonia left the area. At this point, only one challenge remains before I have all eight badges.

Pokémon Shield: Like in Sword, I made my way through Spikemuth so I could challenge Piers and get my seventh badge. I did so, and earned my seventh badge and a replica of the Dark-type uniform. After a talk between Piers and Marnie, I returned to the entrance and got a TM. Went to investigate the loud noise, and met with Leon. Went through the tunnel and met with Hop. We both headed to Hammerlocke, where we met with Sonia and Magnolia and talked about the red light, before Sonia and Magnolia left to look into something.

Oh man it has been a bit. I took the train with Hop to Route 10 and beat the trainers before heading into Wyndon. I didn't bother exploring much as I didn't remember much of anything important being around so I headed straight to the Wyndon Stadium and beat Marnie and Hop in quick succession. Then comes the Macro Cosmos bit that drags against easy opponents that I just used Cinderace and Pangoro for apart from the fight against Oleana atop Rose Tower. After some sleep I had to battle four gym leaders, including Bede, before Rose ruined the festivities. Cinderace defeated Rose's whole Steel team after a quick trip to the Slumbering Weald. After making the catch that the great Leon could not I returned to the Wyndon Stadium for a battle with the champion himself.

All in all the battle was less difficult than it normally is for me despite my team being a few levels lower than they were compared to teams I have used in the past. Cinderace and Dracozolt were the two MVP's for sure with Dracozolt taking down G-Max Charizard all by its lonesome. I watched the credits roll and took a break. I want to the postgame to get another Zamazenta but I doubt I will post about it.

I feel like I should do a breakdown of my team. Cinderace was really strong and probably the MVP of the runthrough. Orbeetle was disappointing. It was always kinda weak even after evolving. Pangoro was awesome and I really enjoyed its type combo. Cramorant was another disappointment to me but not because it was weak. I was excited about it's ability but I almost never got to use it. I think I only ever saw a Pikachu in its mouth once and that was when I intentionally took a super effective hit to lower my health enough. I still want the shiny though. Weezing was really good when it first evolved but its usefulness slowed a bit near the end. Probably because it seemed most Fairy types had Psychic moves or were also part Psychic. Dracozolt was so hit or miss in that it would a monster or just faint in one shot. I would say it got better as the story progressed. And yeah I guess that's it.