I have a lot of experience with Rain Dance teams, but this is my first sandstorm team. I've been using this team for quite a while and it has served me well, but I have noticed there is room for improvement. any suggestions would be appreciated. Sets up sandstorm and stealth rock as my lead and also serves as a very sturdy physical wall, while being able to take some special hits. sandstorm provides passive damage while using slack off to heal. I can use roar to psuedohaze and scout. 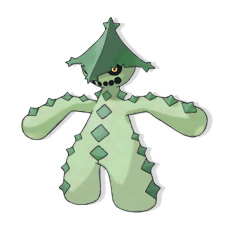 One of my favorite physical sweepers. Substitute, then Swords Dance and cacturne will be on his way. I can also keep substituting until I activate the Liechi Berry, that way I don't have to risk getting rid of my substitute to use swords dance. Sucker Punch makes up for cacturne's low speed with the downside of missing when the opponent is not using an attacking move. Seed Bomb provides a reliable, strong grass STAB move

My quite speedy, baton passing, wall. Gliscor can use Rock Polish first, and use his defensive capabilities to survive the first hit. From there I can decide if he can survive another hit while I use swords dance, or just baton pass the speed boost. Aerial Ace just provides some form of attacking

The Special sweeper of the team. With a rock polish boost from gliscor, not much can stand in it's way. Flamethrower is the reliable main STAB, Dragon Pulse takes care of those pesky dragons while giving good neutral coverage, Earth Power is a powerful special ground attack, and Explosion is there for the special walls out there, like blissey.

The Special wall. After the nature, ev's, and 31 special def. IV's are factored in, my cradily has a special def. stat of 344. Combine that with the 1.5% boost sandstorm gives, and it has an amazing stat of 516! after a couple of Curses, and Recover to heal damage taken, Cradily will be one tough mother to bring down. After it's Curses, Cradily can deal some pretty steep damage with STAB Seed Bomb and Stone Edge

And finally, last, but definitely not least, the almighty Scizor. Scizor is a great sweeper, with its monsterous attack, ability technician, and moves like Bullet Punch that let it attack first. Bug Bite gives a bug STAB, and brick break gives some fighting coverage without reducing stats (superpower), and swords dance boosts its already great attack to even greater heights.

I like this team for a strong offensive team with sandsupport. You should consider a different set for your hippowdon to help break up cheap hits. I have been using a sandstall/balanced team for quite a while. I would like you to review my Rain Dance team for my wife. The key point there is that Gallade has to fit in because she wants him.

Anyways, for hippowdon
Not a lead but second to throw off your opponent in singles:
Stockpile
Roar/Ice Fang
Slack Off
Earthquake
Lum Berry

I can tank like nothing else with just one stockpile boost. When I get two or three I own the whole team, unless I get toxiced. The only problem is you need a SR user up first. I chose Gliscor with the following set to neuter the opponent. To get both stockpile and slack off you will need a smeargle.

The baton pass set is great, but if you can't pass to heatran nothing else can make good use of it and heatran becomes dead weight due to his speed. Scizor and Cacturne can SD by themselves and the hippowdon set you have loses out to anything that switches in with levitate or is a flyer.

Infernape can OHKO everything on your team. quick solution? Scarf your Heatran.

Hippo doesn't really want EV in SDef. Special STAB SE moves will still OHKO him him quite often. Without investment in Def, he can't wall half of what he could.

Gliscor just seems to be dead weight. The only thing he does according to the description is pass speed boosts to Heatran, and an occasional SD to Scizor. I highly recommend you run a Vaporeon in his place. Not only does it stop Ape from raping you, Vappy brings Wish support which increases the longevity of your team, making it even harder to bring down.

I think Cradily would greatly benefit from Rock Slide/Stone Edge over Earthquake. You have plenty of Ground moves already. This would also prevent Salamence from walling you completely.

Speaking of Mence. I highly suggest you consider a Choice Band. Salamence could wreck this team, and a 394 Atk Bullet Punch just won't do enough to revenge him. Not to mention you already have two Sand abusing set up sweepers.

I hope you take what I have considered into consideration. Good Luck.
Diamond FC: 4898-6805-1681
Standard rules and clauses​

Imposter Oak said:
Machamp needs an ability called "Black Rapper" which allows it to survive at least 7 Bullet Punches before dying. And every time it gets hit it raps about it and Perish Song goes into effect. Because Rap is just that bad. And if any moves like bind or whirlpool get used on it, it can cancel them out by saying "I CAN BREAK THESE CUFFS!
Click to expand...

Check out my drawings
B

Thanks for the tips so far, changes are in bold

And Bulldogs,
Thanks a ton for the Choice Scarf tip, it has really served me well. I'm doin some research on Vappy, to see how he would fit into the team, but I haven't totally decide on him yet.
Last edited: Dec 12, 2009
~signature~​
T

A skarmory would easily set up against your team, especially with your hippo. he needs roar not toxic, since its job is to put up rocks and scout. Skarmory would be a good counter for your team since its super defensive. won't let cacturne set up and laughs at the hippo. also the baton passed rock polishes from gliscor wil only help gliscor and maybe cacturne if it survives the hit on the switch that is...
My diamond FC is 0474 6277 2068
my platinum Fc is 4769 6209 8527
E-mail is cesar.a.cazares@students.nhu.edu
I check this more often than serebii, so please e mail me for fast responses.
My rules for battle: standard rules, no more than 1 legendary, no crying
my last iv project:
ghastly timid 31 att, 31 sp att, 30 speed for trade

I like to listen to metal, because it's real music. If you feel the same way copy and paste onto your signature. started by tyranitar90