If the battle is 3v3 (which I hope it will be), I can see it going like this. Golisopod defeats one of ash’s Pokémon (most likely Lycanroc since it hasn’t battled yet, and if it loses badly now, it could do better against Gladion), ash sends out Torracat, which later activates Golisopod’s emergency exit, before it beats Scizor. Golisopod and/or another Pokemon (pinsir maybe, depending on the rules on emergency exit), could then defeat Torracat, before Pikachu eventually wins the match

The only thing that bothers me about the league becoming a 2vs2 is that fact they didn’t announce it. What if Lillie or Mallow (if she would of used Shaymin?) made it to the finals? Then what? More reasons why they should of just gave each classmate an official secondary.

Golisopod's Emergency Exit activates as Torracat was battling it?... Which means it takes out one of Ash's Pokémon by meaning he was in the lead, then Torracat deals significant damage as Ash's second Pokémon to trigger the ability that leads to KO Scizor?

At least Torracat actually gets to participate and get a win, thank Arceus.
Fanfic Corner:
Pokemon Excalibur - Ash's Galar adventure
Pokemon Chronicles season 2 - Stories with May, Misty, Tracey, Lyra, Gary, Dawn, Paul and various others after they parted ways with Ash

Honestly if Guzma is still in the lead, this could mean much more than a 3 v 3. Cause if you think about it. Say Lycanroc is knocked out. But then Torracat triggers emergency exit and takes out Scizor. Then you could say they’re tied. Unless Pikachu for example already fought and has been weakened. Though Kiawe only has 3 Pokémon. So logically this could probably only be a 3 v 3 at most.
The anime where Stunfisks fly and Meowths talk. Where Oshawotts pop out of pokeballs and tranquills use wing attack. What more could you ask for, Oshawott evolving?. THE ANIME !

75% of Pokemon gamers use cheats and specially made codes to make their pokemon battle-worthy. If you are one of the 25% percent that level their Pokemon up legally, put this in your signature. (Started by SkittyLover77)

The crew - Shun the Greninja , Wing the Talonflame , Tank the Gogoat , Ragequit the Tyrantum , Joules the Heliolisk & Melody the Sylveon.

Greninja all the way

At least this round ain’t gonna be 1vs1 which is great, finally

- Torracat gets to have a serious battle for once which is great, I assume that Ash will use Pikachu and probably Lycanroc as well..

- I like that Ash is finally going to give Guzma a run for his money especially after he “destroys” Lana, it’ll put him in his place as Ash starts to remind him of his worst enemy in Kukui

As for Ash losing here, I don’t think that the writers would ever make that mistake of not having him and Gladion face off in the final battle, plus a potential showdown with the Masked Royal..

Guzma will have the advantage at this point in the episode and have Ash on the ropes but as he starts to lose control of his temper and realizes that he can’t dominate Ash like he did to his other opponents!

Guzma won’t be able to handle all that pressure, swinging the momentum in Ash’s favor and the comeback will be completed. It’s good to see that he can’t run away like he did with the Island Challenge as this is in a packed stadium with so many people watching and will have to accept his loss..

You have to remember, Guzma has an aggressive battle style and will beat you till you can’t get up, if his opponent is one that never gives in and fights till the end, it becomes very hard to assert dominance especially considering that Ash is somewhat more skilled compared to Lana for example and could possibly figure out a way to win!

If Ash were to lose in this league, it’s probably gonna be in the finals.. My prediction is that he will get his battle with Kukui and the Professor’s dream from the Japanese opening comes true!

The emphasis on Guzma in this episode excites me since we might see him get some redemption when Satoshi inevitably defeats him. I'm also glad that Satoshi's Nyaheat will apparently defeat Guzma's Hassam.

TobyH2003 said:
The idea that Guzma sees Kukui in Ash will be made even worse for Guzma since Ash is using Torracat, due to Kukui having one at some point
Click to expand...

Worse yet, since Ash went back in time to influence Kukui, Ash is probably the origin of what traumatized Guzma in the past.
http://forums.upnetwork.net 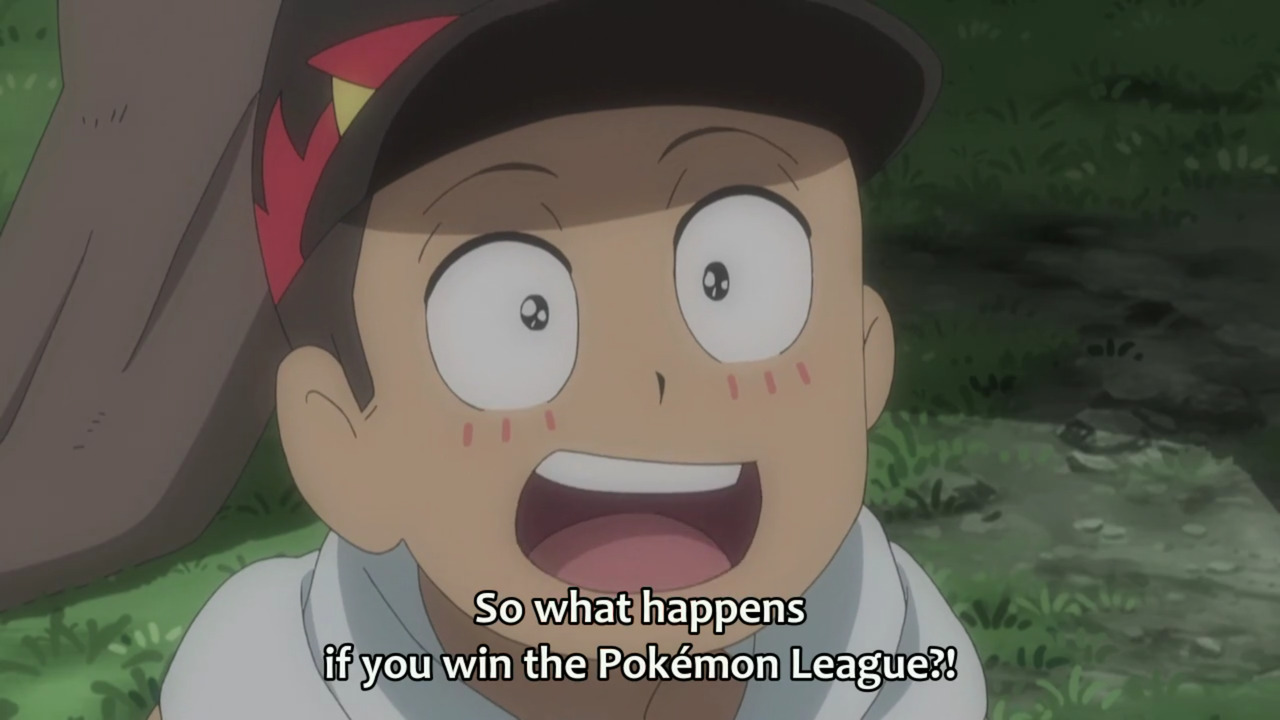 Doppelgänger said:
Worse yet, since Ash went back in time to influence Kukui, Ash is probably the origin of what traumatized Guzma in the past.
Click to expand...

Yup, the reason why Kukui wanted to make a league was because Ash inspired him to do so when he was a kid as Kukui was in awe when he heard of Ash’s stories of previous experience as a trainer that competed in many regional league tournaments!

Too bad he couldn’t answer this question haha so I guess he’ll find out what happens first hand when Ash does win the league and Kukui will finally get that battle against Ash that he never got in SM003, when Tapu Koko instead summoned him and taught him how to use Z-Moves..

For me this episode was an indication towards Ash and Kukui battling each other in the near future and that this meeting would shape up the Alola League in some form and that this would be a very significant event in both of their lives!

I also feel that the Professor is the father figure Ash never had and it would be so nice to see the student face off against the mentor in one last final showdown which would vindicate the events of SM125!

He finally decided to make good on his promise after they came back from Kanto when seeing how much his class enjoyed those Gym battles with Brock and Misty...
Last edited: Aug 10, 2019
S

Anybody else thinks this how Ash's Semi-Final plays out?
G

Anybody else thinks this how Ash's Semi-Final plays out?
Click to expand...

I'm at least hoping for a 3v3. So I would add Pikachu and maybe something like Pinsir in there.
K

Thb, even if Ash lost here (what I don't think he will do), it isnt such a drama if he stranded in the top 4. Ash isnt a bad trainer and I don't Guzma is either. I just find it strange that he has trouble with handeling his own ace. Maybe Ash will show real passion to Guzma.
Love and be loved! Shower the world with kindness

I was already suspecting for quite a time they would let Ash win this time, because of how the League would be structured
K

Bortgreen said:
Once they announced the winner gets a match vs Masked Royal I've became certain Ash will win this league

I was already suspecting for quite a time they would let Ash win this time, because of how the League would be structured
Click to expand...

And the video with the post leagues, I found that strange. Why would they do that after 20 years? Most fans aren't around anymore since the beginning.
Love and be loved! Shower the world with kindness
M

Well would you look at that, an actual team battle with more than one Pokémon on each side!
Click to expand...

Considering this is going to possibly be a 2 v 2, Torracat did not beat Goliosopod, emergency exit doesn’t mean that it lost the battle as it can still be called back out.

KenzeyEevee said:
And the video with the post leagues, I found that strange. Why would they do that after 20 years? Most fans aren't around anymore since the beginning.
Click to expand...

Just imagine if they did this the first time in XYZ... A couple more pounds of salt from the fanbase
B

I just hope Nyaheat being the one to star in and save this fight has some significance if he’s not going to get the chance to defeat his rival at the exhibition match. We already know the Alola League is not just about battling but character moments and development, the obvious elephant in the room is Nyaheat —-> Gaogaen which provokes Guzma and reminds him of Professor Kukui. But as it stands now I just hope the sight of Nyaheat destroying his Bug-type Pokemon gives us some crazy Guzma. It seems like they have the perfect setup with Satoshi being Kukui’s student, the rematch, Nyaheat being Gaogaen’s rival, and the Fire-Z still needing to murk something.

It would be really cool to get a scene of Mooland watching from the other life.

Bortgreen said:
Just imagine if they did this the first time in XYZ... A couple more pounds of salt from the fanbase
Click to expand...

The fact is that after losing the Kalos League (that is almost 3 years ago), peopel are still salty. Him losing here would making things worse. I think the writers and director saw this.
Love and be loved! Shower the world with kindness
G

KenzeyEevee said:
And the video with the post leagues, I found that strange. Why would they do that after 20 years? Most fans aren't around anymore since the beginning.
Click to expand...

Ooh people are setting themselves up for disappointment againg. This is going to explode like it did three years ago.
K

GarchompChain said:
Ooh people are setting themselves up for disappointment againg. This is going to explode like it did three years ago.
Click to expand...

I hope not, I couldn't handle it twice
Love and be loved! Shower the world with kindness