Hey this thread is basically about you guys writing about things that you thought or did relating to pokemon that when you think about it now is pretty stupid.
It could be you thinking that something did something if you pressed it or listening to something on the internet that turned out to be fake. Or maybe you thought a certain character in the show was a girl instead of a guy or a guy instead of a girl. Share your stories!

I'll start us off by saying this...
When i was young i used to hate getting my stats lowered by an opponent because i thought it actually took away your stats forever, not just lowering it during the battle.
If you dont understand, if you have an attack of 183 for example, and an opponent used growl and lowered your attack. I thought it went down to 182.

I used to think Slowbro evolved into Slowking ^.^'
I'm just letting you all know that I will not be returning to Serebii. I've lost interest. But please remember to visit my DeviantART!
¸.-~*Pokemon Insanity*~-.¸
¸.-~*Breeding Pokemon, Breeding Insanity*~-.¸​
W

Man, this brings back to mind rumors of Pikablu, Oak's secret garden of catchable starters and Mew under the truck in Red and Blue. So nostalgic!
Currently playing: X, completing Pokedex.
T


Ryubane said:
~ Latios and Latias, when put in the daycare, made baby Lugias
Click to expand...

I heard something like that once. They do look sort of similar, don't they?


Ryubane said:
~ Gastly was a split-evolution that tied in with Cloyster.
Click to expand...

And these look similar also. I believe I just noticed the similarity and thought, "A water and Ghost type would be cool."


Ryubane said:
~ The Ho-oh that flew over Ash in the first episode of the anime was not a Ho-oh, but rather a Fearow evolution named Leerow.
Click to expand...

WynautQueen said:
Man, this brings back to mind rumors of Pikablu, Oak's secret garden of catchable starters and Mew under the truck in Red and Blue. So nostalgic!
Click to expand...

And I actually tried out the truck thing, fully expecting to see no truck! When I saw the truck, I got my hopes up for nothing.

As for something stupid I once did, I used to struggle with training more than just my starter. So, I'd be running around with a level 48 starter and...what? Maybe about level 12 for the other five.

Then I'd come up against somebody with Pokémon strong against my starter. It was so bad, I was using Blastoise's Bubblebeam against Erika's Grass types. So my brother tells me, "Water moves aren't good against Grass types." I actually responded, "It's a beam--it will burn plants!"

Sprites ripped by Yoshi Clone of spritersresource.com. Banner by my brother ShinySandshrew.​
G

The Mew/Truck thing in Red and Blue, thinking Missingno was actually a real Pokemon, when I first seen Stantler I thought it was an evolution of Tauros.
[BANNER][/BANNER]
My Anime List

This is pretty recent.
I know I'm not the only one who tried to use the Sprayduck on the flopping Magikarp in Lake Valor...
or am I? 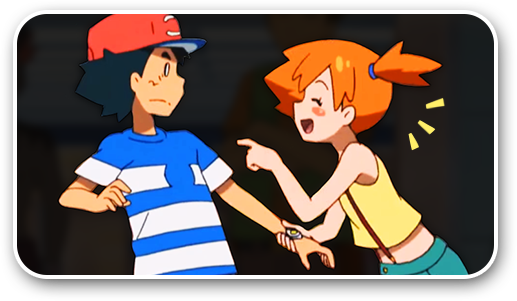 ^No, but that's one of the cutest things I've heard on here (no offence). "Don't die, Magicarp!"

Anyway...the Truck thing. I just KNEW it had something under it. Imagine how happy I was to find the actual Mew glitch. My old friend, Naomi taught it to me...then they had to go back to Korea. I still miss Naomi. She was my best friend, and didn't treat me like I was a freak because I can't get in the sunlight, but I digress.

Not knowing how to get into Saffron City comes to mind. Thinking I could catch a Togepi in the grass between Pallet and Cinnabar. You know the one. I also used to get Ground and Rock types mixed up.

~Nemmeh
Before you try to act superior to someone else on here, remember that no matter how much of an "internet cool-guy" you think you are, this is a Pokemon forum.
F

yes! i used to think that too...then when i realised it didnt i thought it was stupid that slowpoke evolved into two different pokemon.

Nemmeh said:
^No, but that's one of the cutest things I've heard on here (no offence). "Don't die, Magicarp!"
Click to expand...

No, I'm not offended by that. (You can bet I no longer felt sorry for them upon meeting a gazillion wild magikarp while surfing.)

As for the Slowking thing...-not trying to be funny here, but- you mean Slowbro doesn't evolve into it??
I really need to brush up on my Pokemon.

-i thought that there were levels past 100
-you could fly to the moon in r/s >.>
-thought for r/s you had to get BRAWLEE'S help, not BRAILLE.
-thought that gust was a flying type move :/
-thought mirage island was worthwhile
-i thought back in the days of blue that if you played forever, your character would die.(he does have a bed!)
-thought your mom slept in your bed on adventures V.V
-used to feed my pokemon pokeblocks in r/s..thought they needed to eat
-also i thought that flying on pokemon like swellow was cruel...I MEAN THEYRE TINY.

^^This is all from forever ago
WATER​
You are quiet and timid, most likely one of the smarter people in school. You don't have a lot of close friends, but the ones you have mean the world to you. People may avoid you at times, but you don't care. You like to be on your own, anyway. You know most likely better than others what goes on around you. You can see the good and bad in everything, and you don't overlook anything. You are a little bit of a perfectionist, you can't stand clutter. You like to finish anything you start 100 percent, not missing anything. Although you are very calm and self-controlled, you can be very fierce and intimidating when you need to be.

- In Red and Blue, I used my Master Ball on a Grimer because I thought that I could get another one.
- After seeing my cousin evolve his Kadabra and Graveler by trading, I tried to evolve my Lv. 20 Wartortle by Trading as well.
- I believed that Missingno. was actually a super rare pokemon that only my friends and I knew about.
- That I could take on a Lv. 100 Blastoise with my Lv. 36 one, granted I gave it a lot of Proteins, Calcium, amongst other things, but still.
- The truck glitch was completely impossible to pull off, due to me not having access to trade at the time, still never saw the thing though.
- That Sudowoodo was a Grass-type Pokemon, talk about deceiving.
- That you could breed Legendaries and Ditto after doing various things.
- That EV training actually meant using Eevee to upgrade your Pokemon's stats.
- Beating on Psyduck makes it stronger
- Teaching my Starter all HM moves
- Only training my Starter believing that he would be invincible
- The last pokemon we left at Oak's would die/be obtained by me later on.
- Brock and Misty would travel with you after you beat them.
- Legendary Pokemon would come back after you beat them.
- Legendary Pokemon could not be captured at all.

- I used to only train my starter
- I thought Ho-oh in the first episode was a weird Fearow
- Having a level 100 Machamp use strength on the truck while a link cable connects RBY to GSC would create a hole that takes you to Johto (my cousin tried that one)
- Catching an Articuno and releasing it will cause three baby Articunos to appear in Seafoam Island
- Thanks to the Anime, I thought Macargo was a 3rd gen. Pokemon and Keckleon was a 2nd gen Pokemon (I never beat GSC because of the 'only traing my starter' thing, so I never saw caught Slugma)
3DS friend code:1118-0349-6106
Friend Safari: Sliggoo, Fraxure, Noibat

All Hail Meowth!
Trophy made by Pika22

I'm busy with life outside the internet; I won't be on often​
​
E

-Slowbro-->Slowking
-Aerodactyl w/Metal Coat-->Skarmory
-Ghastly-->Cloyster(split evo)
-Charvana-Sharpedo-Wailmer(I haven't seen Wailord yet and it seemed logical since their were listed after each other)
-You could use fly from Depratements Stores' roofs
-Gengar was pure Ghost
-A long time ago I thought only the attacks base power was the thing that calculated its strenght, needless to say, all my pokemon had hyper beam
-Also I though that it was randomly selected which pokemon that attacked first( speed stat?)
-Recently, the first time I saw the covers of Diamond and Pearl, this is so stupid, I thought Palkia and Dialga was evolved "android" forms of Groudon and Suicune-.-( Then I believed pokemon had gone too far when legendaries evolved, luckily this was not true)

Ryubane said:
~ The Ho-oh that flew over Ash in the first episode of the anime was not a Ho-oh, but rather a Fearow evolution named Leerow.
.
Click to expand...

To me it was a little different, the bird was still the evolution of Fearow.. Even when Ho-oh where revealed, I still thoug the line went Spearow-Fearow-Ho-oh-
Last edited: Nov 30, 2010

Before I even played the games, I thought every Pokémon was unique, and of course that meant no evolutions. For example, the first time I saw Chronicles with Ritchie in, I thought that he was just looking after Ash's Pikachu. XD

I also didn't think the Regis and Jirachi were legendary. Weird, I know. For some reason, I thought ABSOL was...

I too fell ffor the 'only train your starter' thing. I beat the Elite Four with only Empoleon and Palkia. XP Tried to give it up in Sapphire (Pearl was my first game) with a Lombre, but ultimately failed. Cue Kyogre and Blaziken. Just used Venusaur for FireRed then. Finally, in SoulSilver, I BEAT THE ELITE FOUR WITH MEGANIUM, FURRET, PIKACHU (no Thunderstone, not because of Ash - barely watch the show now), PIDGEOT, SEAKING AND TOGETIC!!! ALL LEVEL 52!! =] In fact, grinding is pretty fun IMO, so I'm gonna train MORE THAN SIX when Black comes out. (In case you're curious, Snivy).

Keeping Pound, Bubble and Peck on my Empoleon because the anime made me think they were strong. Changed them to Metal Claw, Brine and Drill Peck later.

Thinking the egg that contained Happiny (<3) in Pearl contained a Bonsly because of the pattern. Blame the anime. Again.

Yeah, I've done stupid things (most due to the show). But they don't matter, all that matters is that I've learned from them.
Who cares about cookies? Come to the Light Side, we have CUPCAKES!

I always thought Flash was a very useful move, so I always replaced my brother's Kadabra's Psychic with Flash. And I always taught Flash to any pokemon that could learn it.

Why yes, it exists

I also used to think that some types were strong or weak to each other depending on practicality and real-world application. As in, Ice was weak to water because water melts ice in real life. Yeahhh...
​
D

My 6 year old self had some strange theories about the pokemon centre in pokemon yellow: