My friend and I are planning on singing 4 Minutes in honor of the world "ending."
(if no one has heard the song it goes like, "we only got 4 minutes to save the world!")
we'll be singing that at 11:56....hehehe. I'm pretty excited to see the neighborhood freak, because we're having a block party...yay!
"Harry! Get yer wand out of yer back pocket! Better wizards than you have lost buttocks!" -Mad Eye Moody
"Who do you know who's lost a buttock?" -Tonks

Yup that's right. It would be cool to be the last person alive.
L

RevengeHitokage said:
Yup that's right. It would be cool to be the last person alive.
Click to expand...

You would (probably) have to eat canned food because most other food will get bad, or you would have to eat plants or hunt. Plants is not as good as meat and hunting is bothersome.
C

New Years Resolution: Keep on working out. I got some weights for Christmas so I'm going to use them.

Also, survive 21/12/12. If it proves to be a lie and the Mayans got it wrong, then I shall be very happy. They predicted it through the stars, which they thought were gods or something.
Charizard

Ludwig said:
You would (probably) have to eat canned food because most other food will get bad, or you would have to eat plants or hunt. Plants is not as good as meat and hunting is bothersome.
Click to expand...

Yeah, the first sensible thing to do would be to raid KFC before the secret recipe dies out =D


Charizardfan900 said:
New Years Resolution: Keep on working out. I got some weights for Christmas so I'm going to use them.

Also, survive 21/12/12. If it proves to be a lie and the Mayans got it wrong, then I shall be very happy. They predicted it through the stars, which they thought were gods or something.
Click to expand... 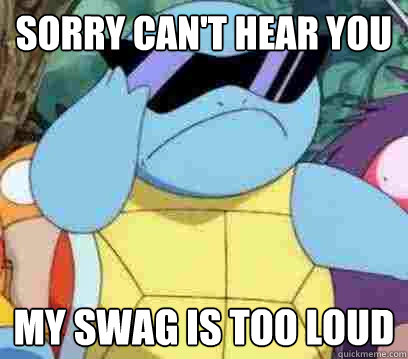 My Gen 6 shinies are Sylveon, Greninja, Delphox, Chesnaught, and Dedenne. The Sylveon 3DS was made by Blood Red Absol.
D

Am I even still here

Happy New Year Everyone!
Let's hope the Mayans are just a bunch of crazy old voodoo freaks and we live to say these words at the end of next year
L

I think (not completely sure) that the Mayans didn't predict that the world will end 12/21/12, I don't remember there being any confirmed information stating such, just that their calendar ends that date. That could mean that they did predict it, but it could also mean that they didn't want to create calendars during the whole lifetime of the civilization just to postpone the last date on them a few thousand more years.
A

- Meet my friends out of school more, because I feel like I don't do that enough. At least 3 times, since that's manageable.

- Learn a new skill, this might be the keyboard, but anything will do really.

- Cook a meal consisting of a main course and dessert single handedly for my family at least once.

- Pokemon wise, I plan to be involved with at least four shiny hunts in the whole year. This includes finishing the Solosis hunt I have going now, and finishing at least two more hunts (Zorua and Deino) with the fourth at least started by the end of the year.

- Finally, I intend to get a fanfic type idea I have right now up and running as a comic. It might not be posted here though. Even so, I plan to get at least the prologue and five chapters done by the end of the year.

Basically, I plan to improve my friendships, skills and to stop my chronic procrastinating in 2012. So I guess my goals are kind of like resolutions. =D
Who cares about cookies? Come to the Light Side, we have CUPCAKES!

I will not be on very often anymore... keeping up my own site now.
T

Not making any resolutions, I never do. Going to a New Year's party and that's pretty much it.
nothing lasts forever, but this is getting good now.​
;387;~I've claimed Turtwig~;387;​

Thanks for the banner American--Pi!
​
R

I'm getting it on with depressed women who got dumped the day before. Like a boss.

Blue Harvest;13398938 said:
What was that Regarde. I couldn't hear you with all of that dick in your mouth.
Click to expand...

deoxysxx said:
I'm resolving to turn my sad life around...
Click to expand...

you do that. Umm I have no idea for a new years resolution.So I don't have one.
Forever alone! This Lone Wolf keeps on fighting!
"I don't want to be alone, I just want to be left alone!"​

In Arceus We Trust

- Lose weight. I'm currently 139.. I want to get down to 130. I'm about 5'7, so I think that's a decent weight.
- Start eating meat again. I've been a vegetarian for a little over a year now, and I'm starting to think that it's about time to reform my diet for the better. Truth is, I think I approached vegetarianism wrong. Although I'm not a huge fan of meat, it was never really an ethical issue for me when it came to being a vegetarian. It was just a poorly planned attempt at trying to lose weight quickly.

Umm, I suppose that's it.
I